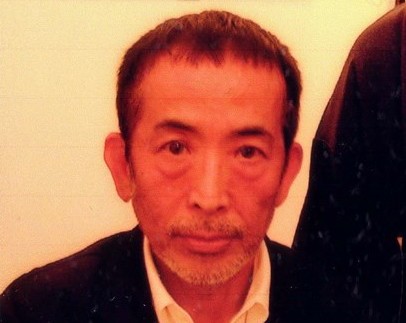 Among all the artists adressing the liminal zones of obscenity and taboo, few have explored the Unheimliche in all its variations with Toshio Saeki’s precision. 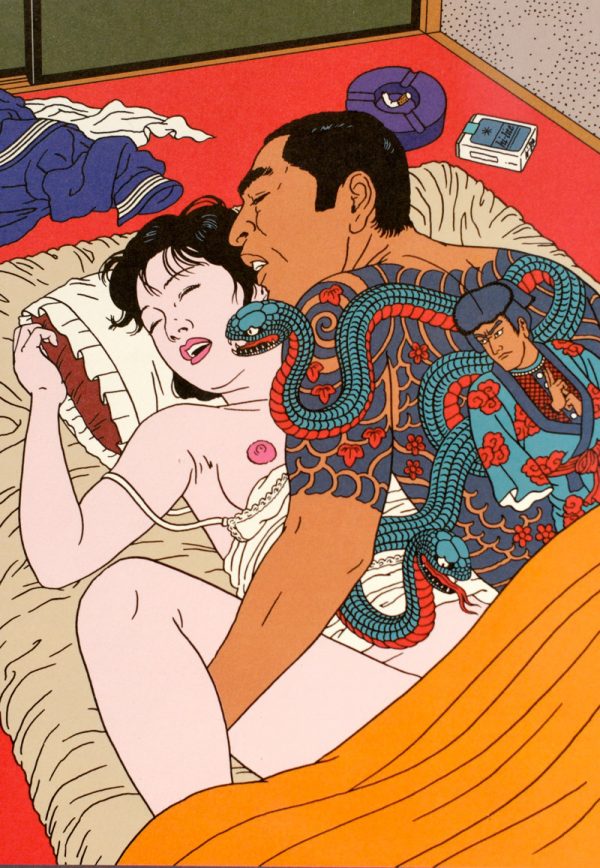 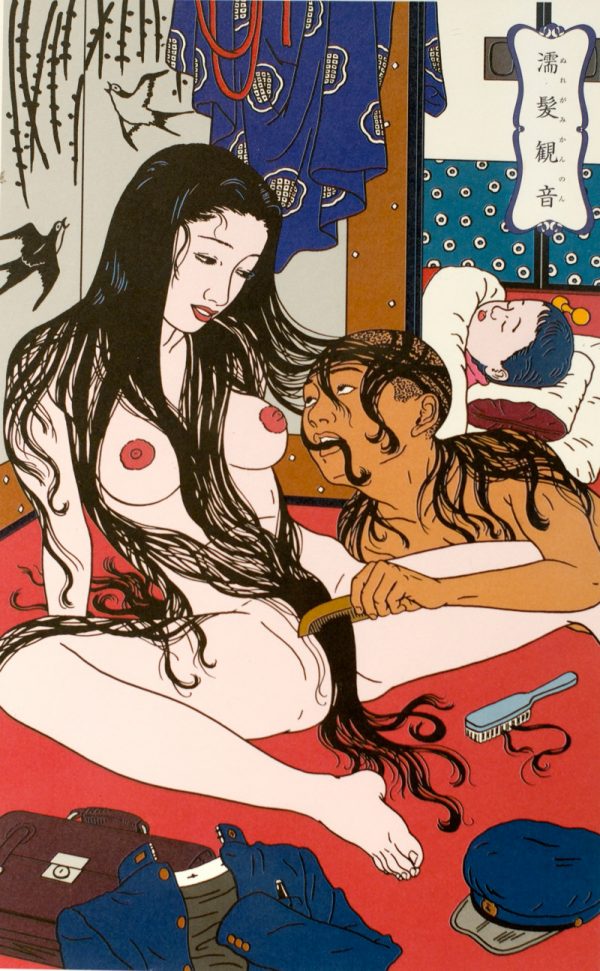 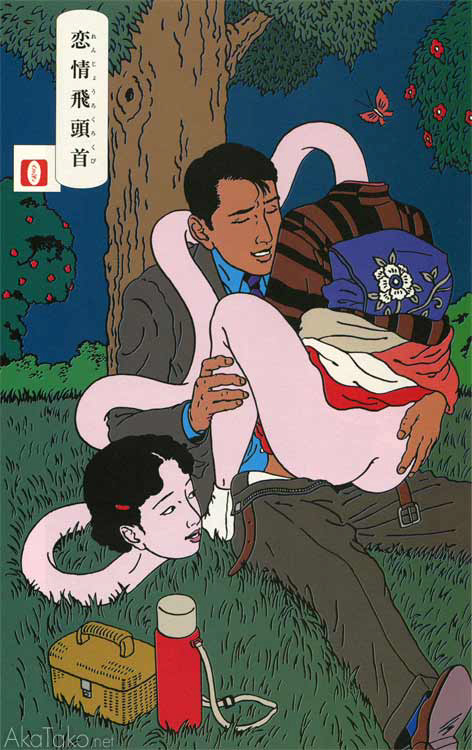 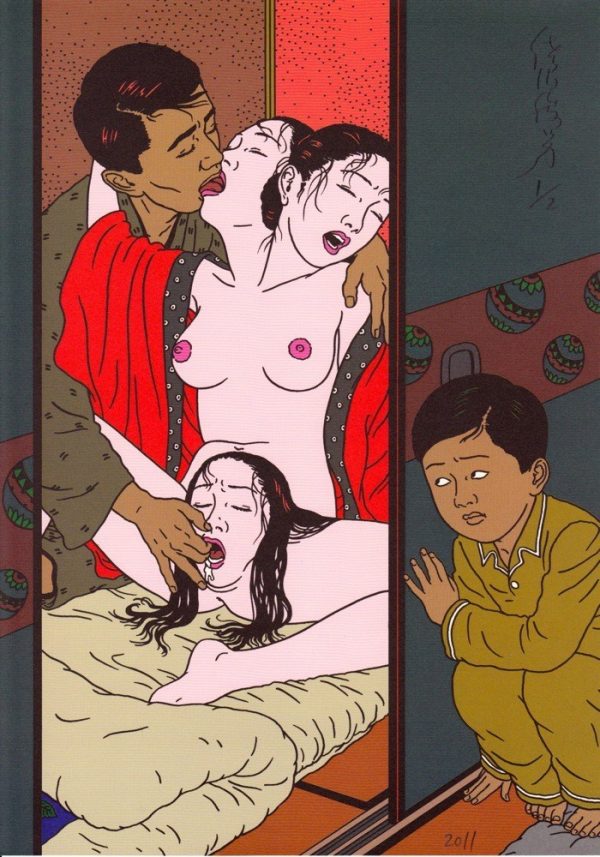 For Saeki, art — like fantasy — cannot and should not know any limit.
In spite of the sulfurous nature of his drawings, he had surprisingly little trouble with censorship: apart from some “warning” notified by the police to the magazines featuring his plates, Saeki never experienced true pressions because of his work. And this is understandable if we take into account the cultural context, because his work, although modern, is deeply rooted in tradition.
As the critic Erick Gilbert put it, “if you look at Saeki’s art outside of its cultural sphere, you may be troubled by its violence. But once you go inside that cultural sphere, you know that this violence is well-understood, that ‘it’s only lines on paper,’ to quote cartoonist Robert Crumb. This extreme imagery of Japanese artists, and their characteristic need to go as far as possible, can be traced several centuries back to the so-called bloody ukiyo-e of the 19th century“.

To fully understand Toshio Saeki, it’s essential to look back to the muzan-e, a bloody subgenre of prints (ukiyo) which appeared around the half of ‘800, drawn by masters such as Tsukioka Yoshitoshi. This latter created the Twenty-eight famous murders with verse, in which he depicted all sorts of atrocities and violent deaths, taken from the news or from the stories of Kabuki theater. Here are some examples of Yoshitoshi’s extreme production. 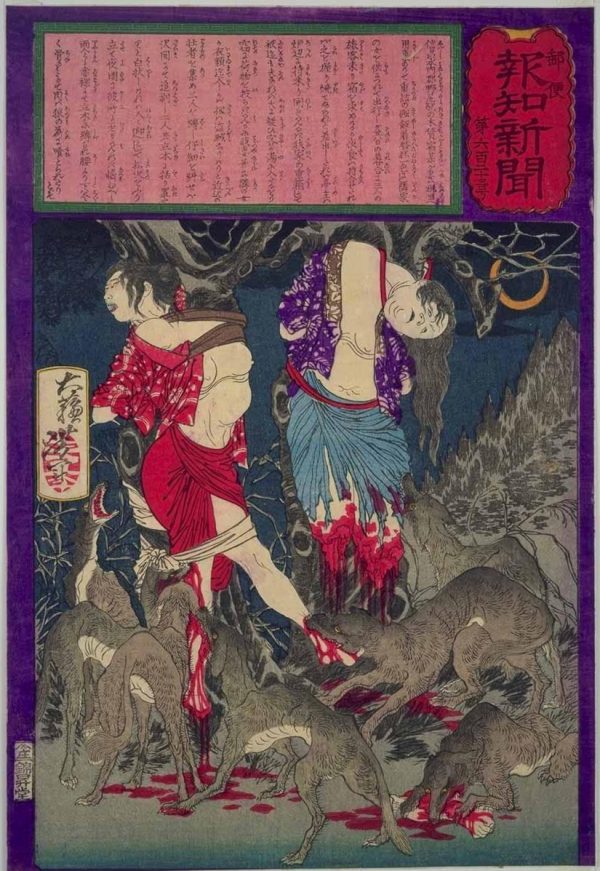 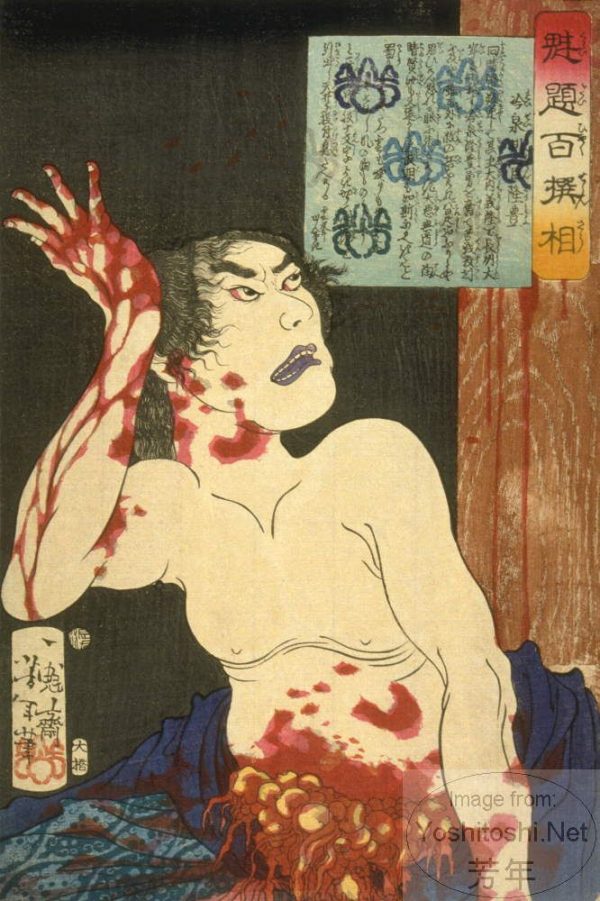 Other muzan-e, often particularly cruel, were drawn by Utagawa Yoshiiku, Kawanabe Kyōsai, and more marginally Hokusai; this current would then influence the more recent generation of artists and mangaka interested in developing the themes of ero guro – eroticism contaminated by surreal, bizarre, grotesque and crooked elements. Among the contemporary most prominent figures, Shintaro Kago and the great (and hyper-violent) Suehiro Maruo stand out.
So our Toshio Saeki is in good company, as he mixes the solid tradition of muzan-e with classical figures of japanese demons, bringing to the surface the erotic tension already hidden in ancient plates, making it both explicit and obsessive. 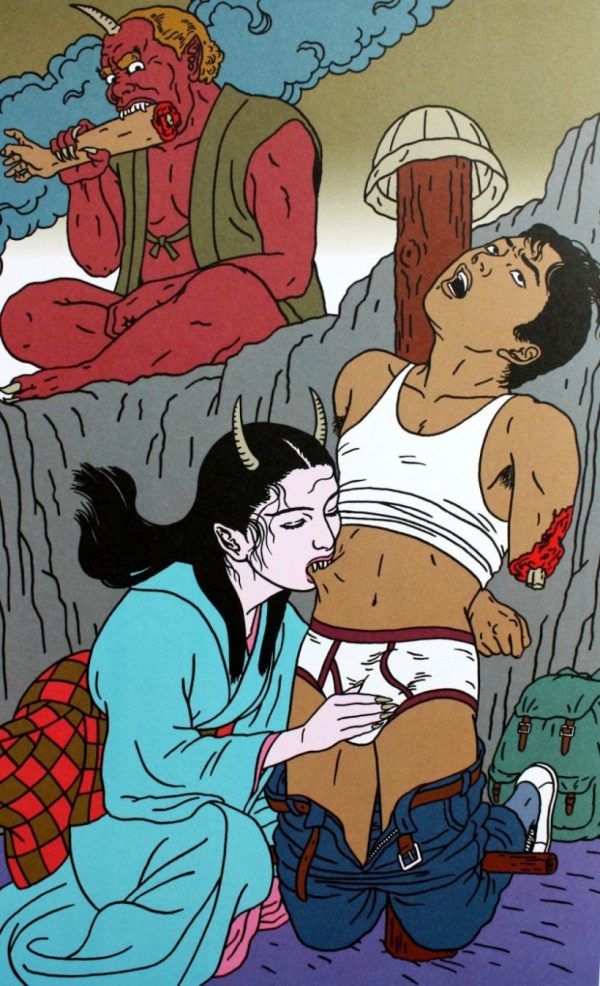 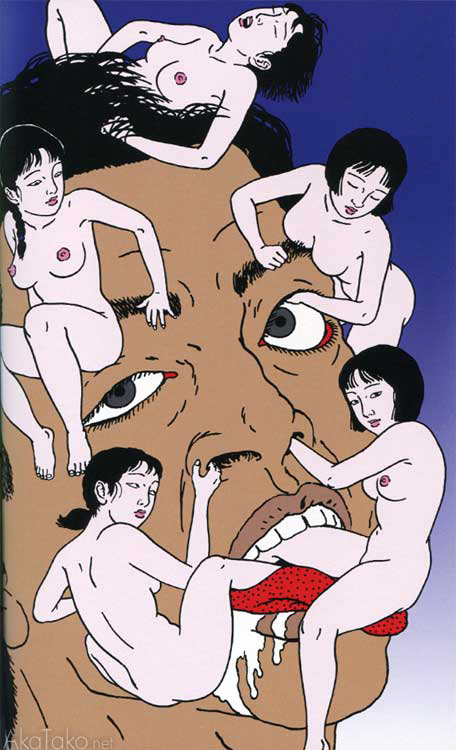 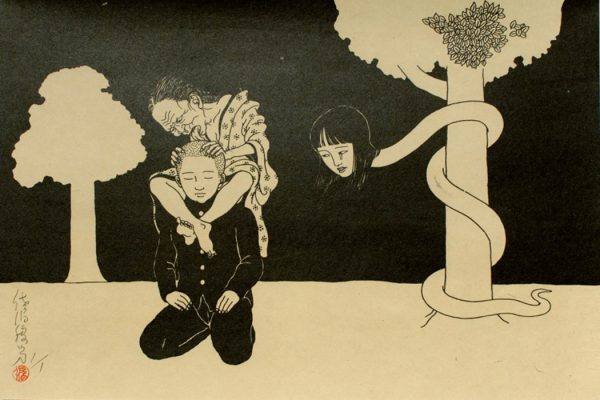 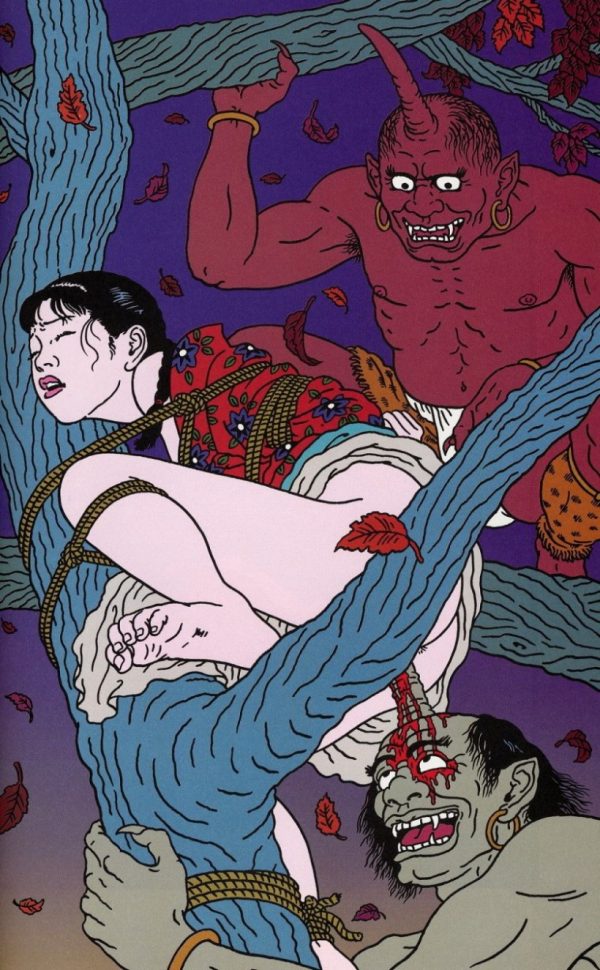 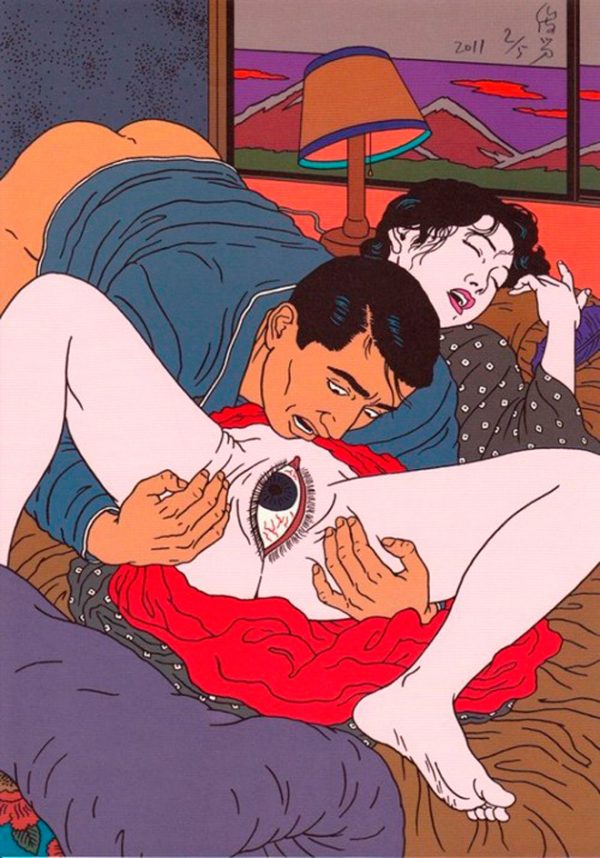 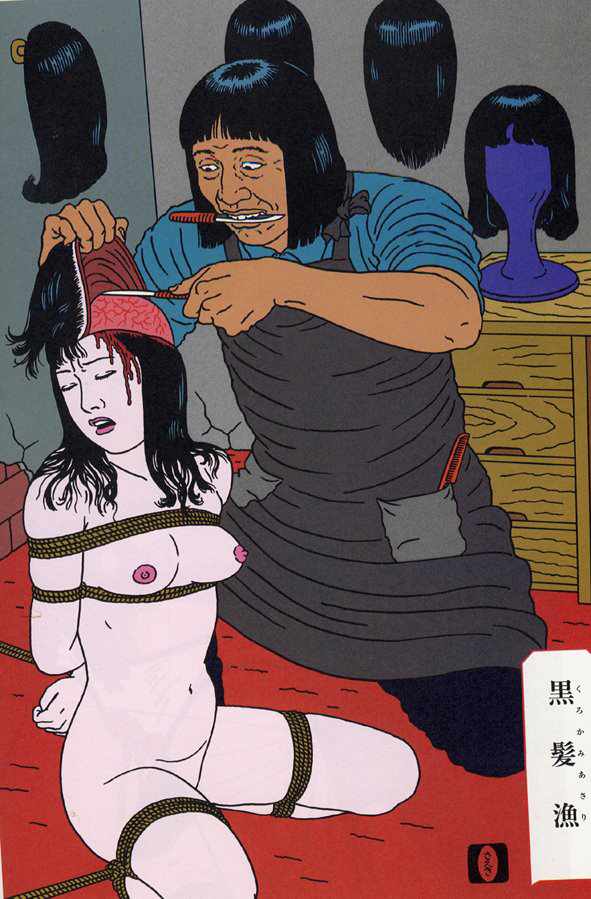 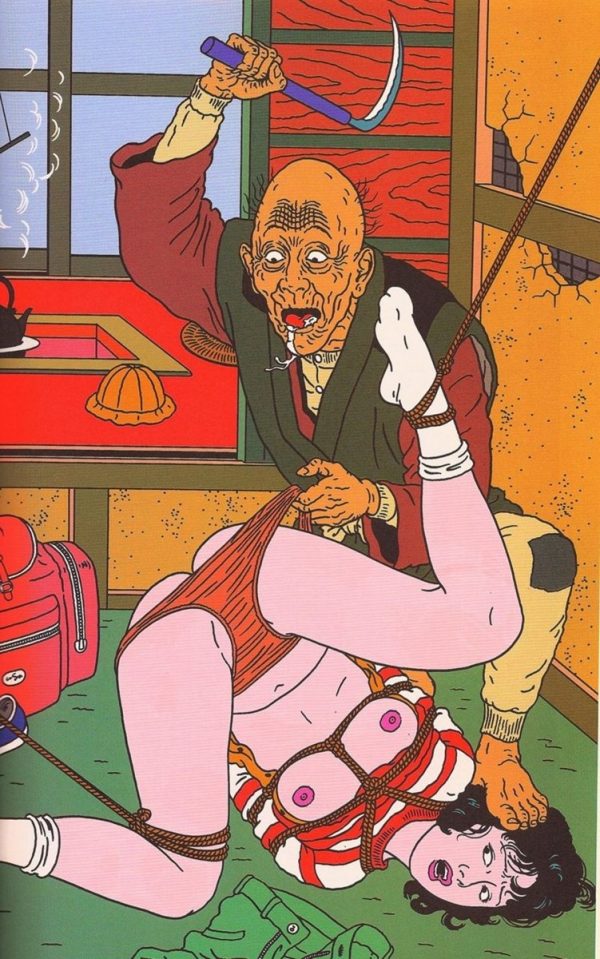 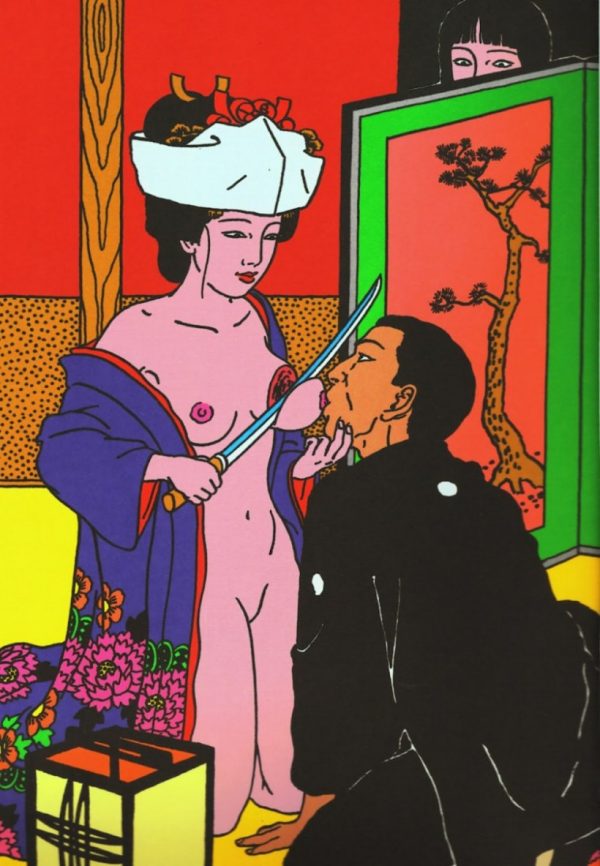 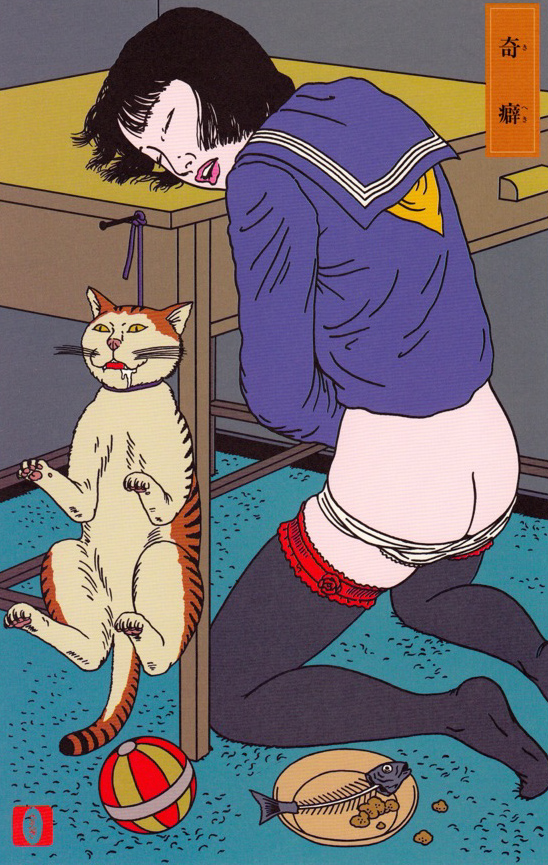 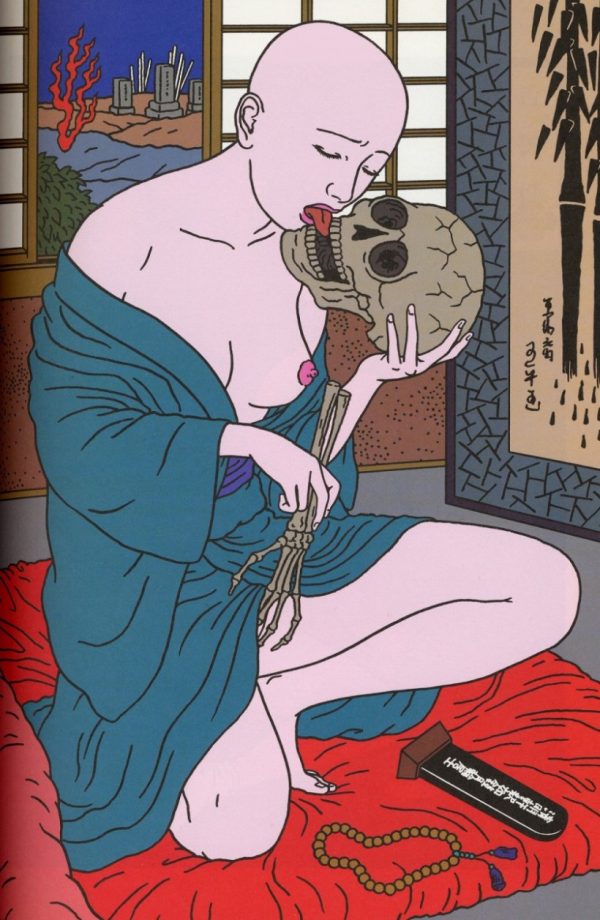 But, for all their shocking power, Saeki’s paitings are always just dreams. “Leave other people to draw seemingly beautiful flowers that bloom within a nice, pleasant-looking scenery. I try instead to capture the vivid flowers that sometimes hide and sometimes grow within a shameless, immoral and horrifying dream. […] Let’s not forget that the images I draw are fictional“. 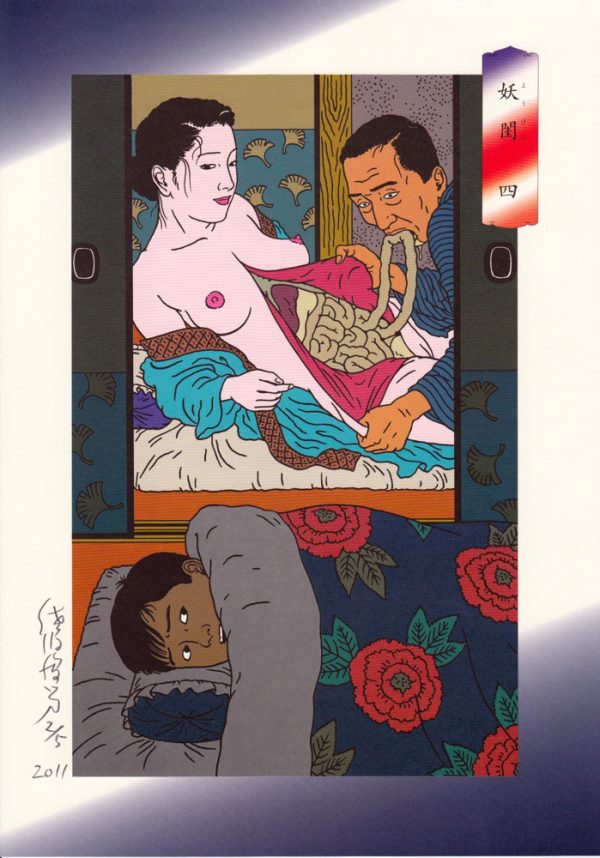 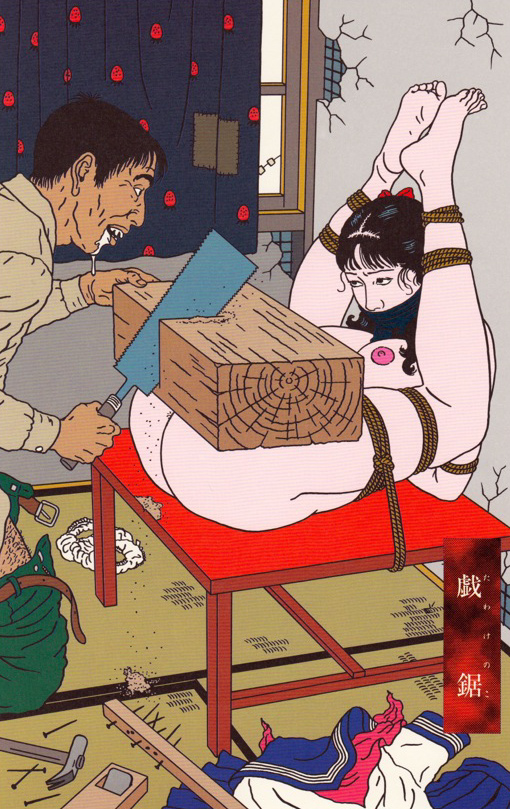 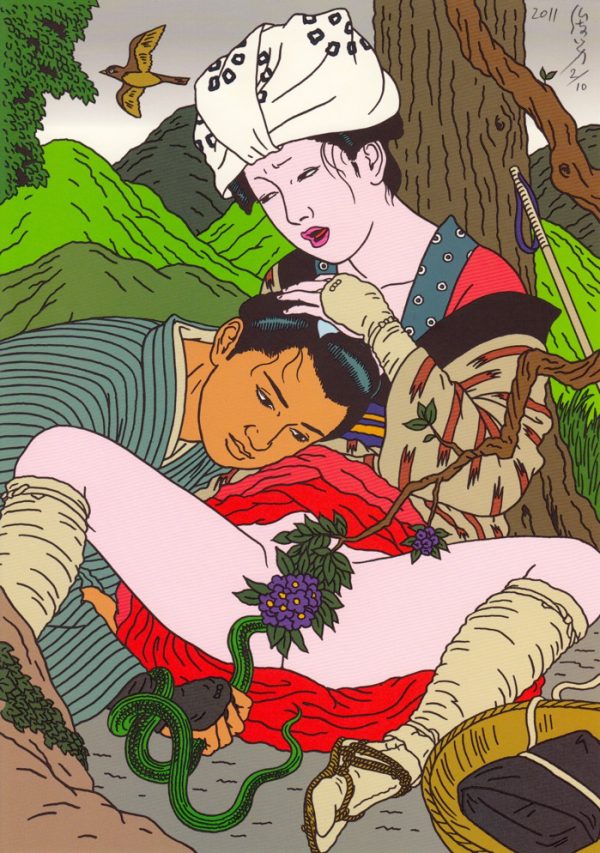 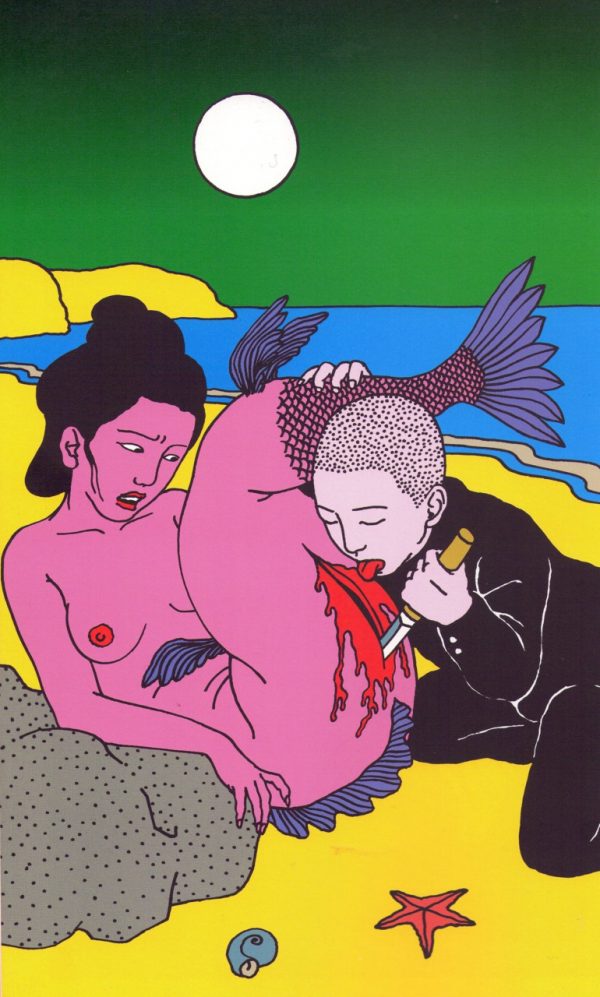 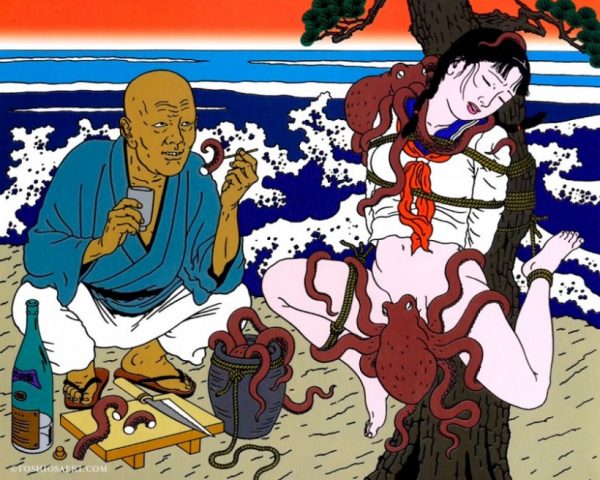 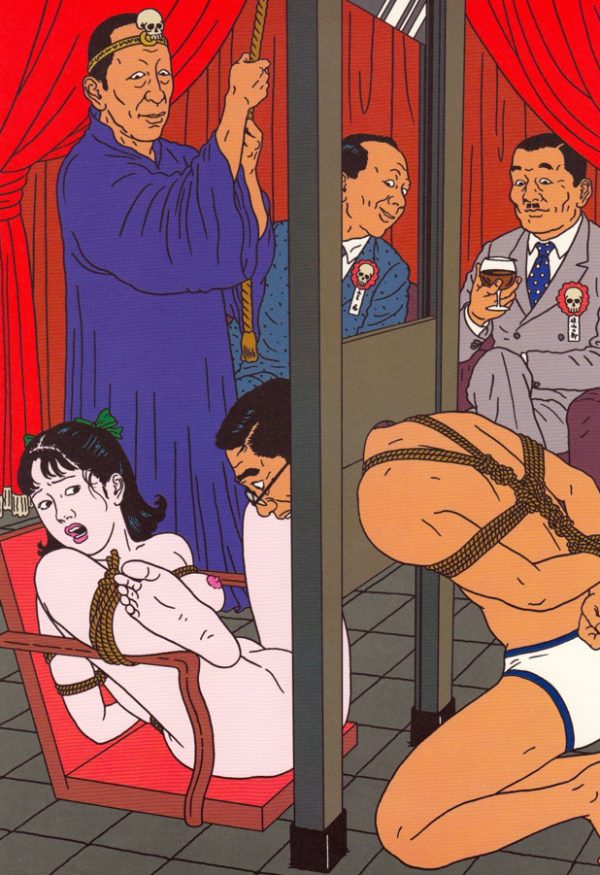 And, again: “The important thing, to me, is awakening the viewer’s sensitiviy. I don’t care if he is a bigot or not. I want to give him the sensation that in his life — basically a secure and ordinary existence — there might be “something wrong”. Then hopefully the observer could discover a part of himself he did not know was there”. 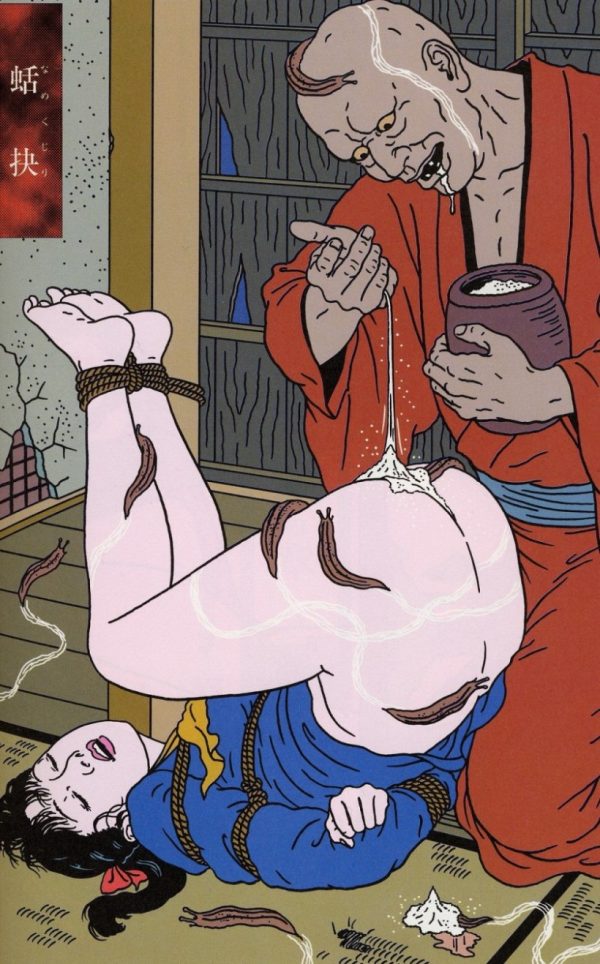 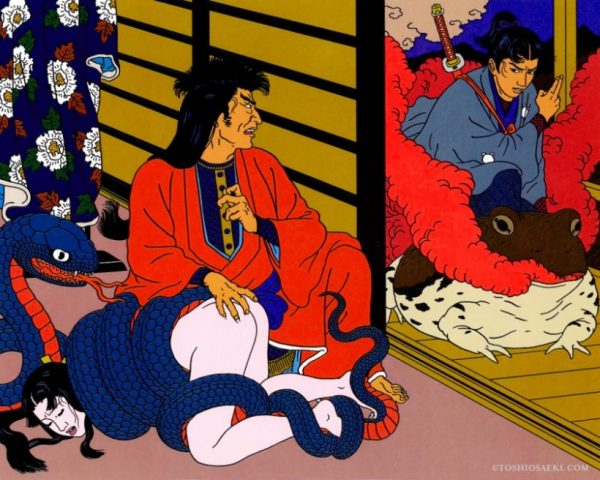 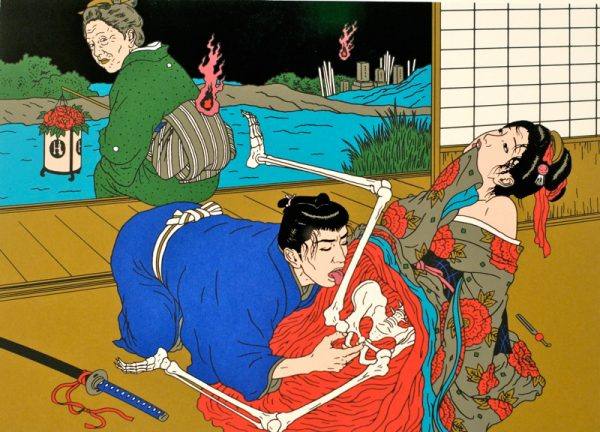 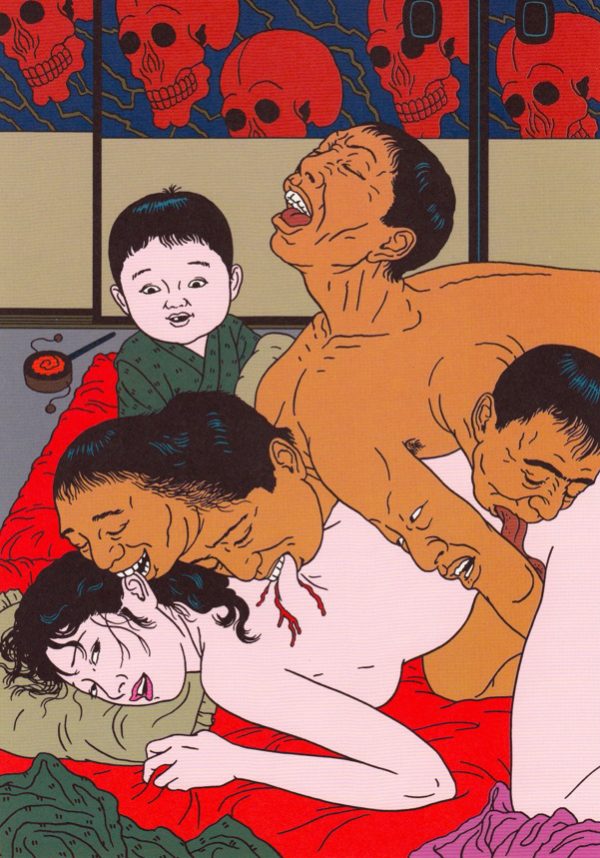 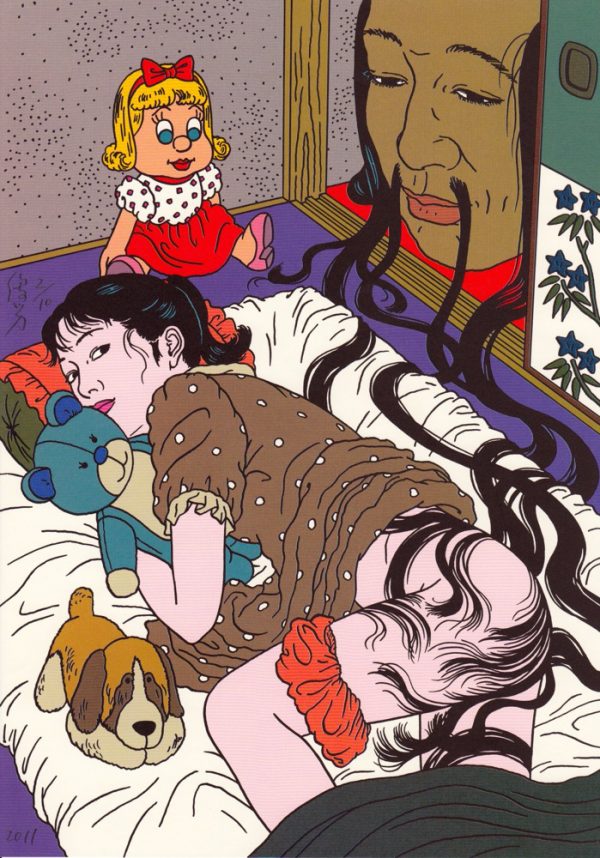 Quotes appearing in this post are taken from: here, here and here.
For a deeper treatise on muzan-e, here’s an article (in Italian) on the wonderful website Kainowska.