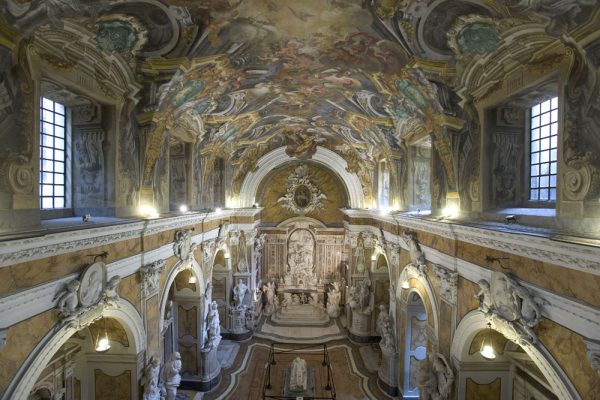 If you have never fallen victim to the Stendhal syndrome, then you probably have yet to visit the Cappella Sansevero in Naples.
The experience is hard to describe. Entering this space, full to the brim with works of art, you might almost feel assaulted by beauty, a beauty you cannot escape, filling every detail of your field of vision. The crucial difference here, in respect to any other baroque art collection, is that some of the works exposed inside the chapel do not offer just an aesthetic pleasure, but hinge on a second, deeper level of emotion: wonder.
Some of these are seemingly “impossible” sculptures, much too elaborate and realistic to be the result of a simple chisel, and the gracefulness of shapes is rendered with a technical dexterity that is hard to conceive. 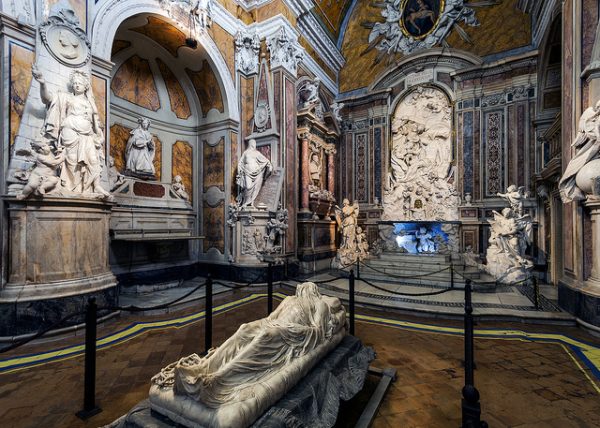 The Release from Deception (Il Disinganno), is, for example, an astounding sculpted group: one could spend hours admiring the intricate net, held by the male figure, and wonder how Queirolo was able to extract it from a single marble block. 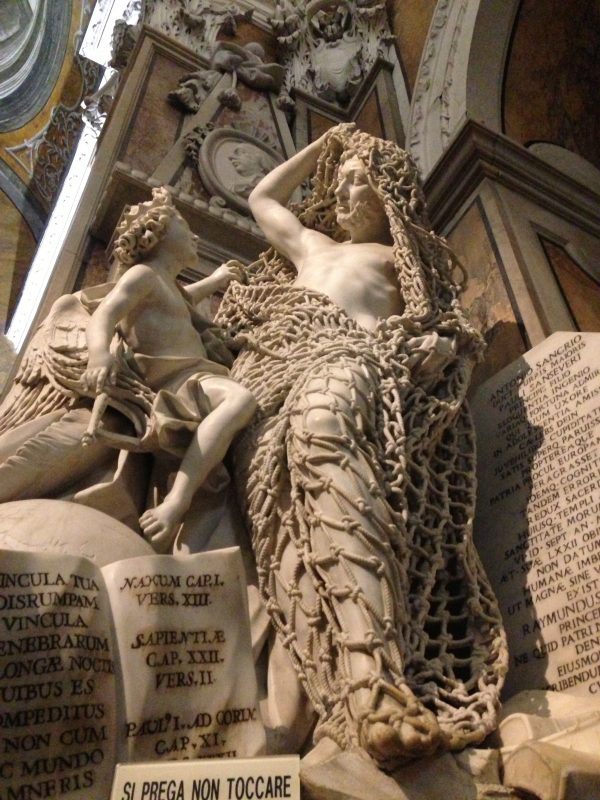 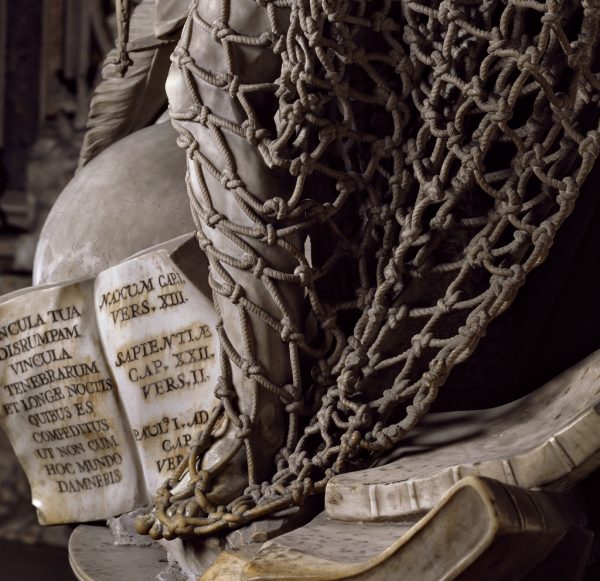 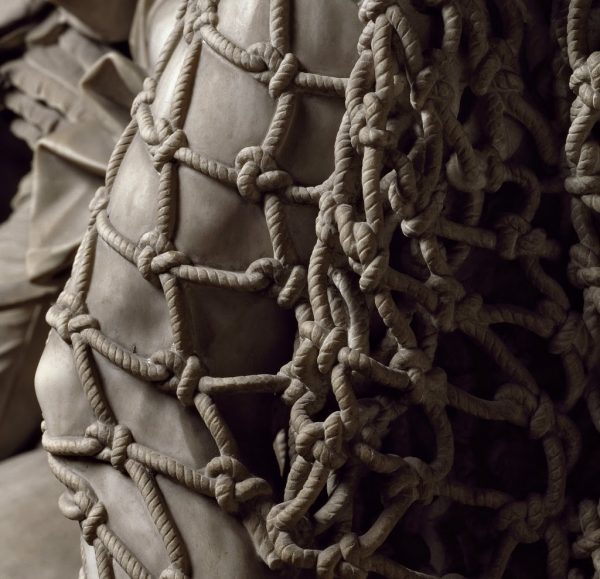 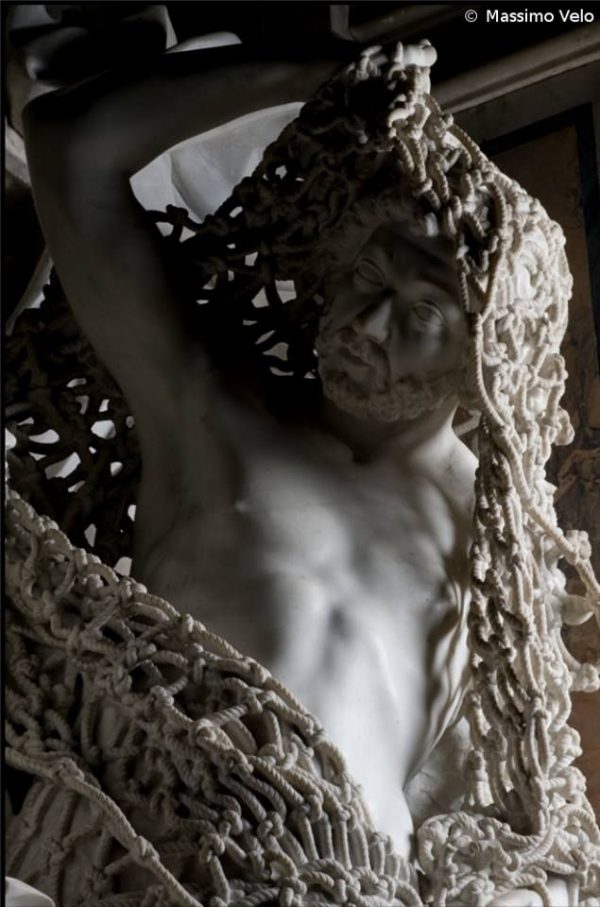 The Chastity (La Pudicizia) by Corradini, with its drapery veiling the female character as if it was transparent, is another “mystery” of sculpting technique, where the stone seems to have lost its weight, becoming ethereal and almost floating. Imagine how the artist started his work from a squared block of marble, how his mind’s eye “saw” this figure inside of it, how he patiently removed all which didn’t belong, freeing the figure from the stone little by little, smoothing the surface, refining, chiselling every wrinkle of her veil. 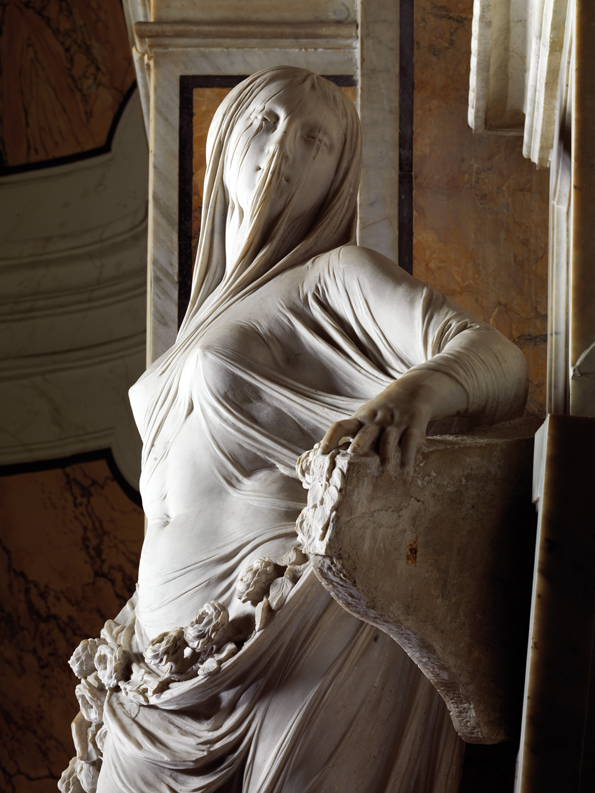 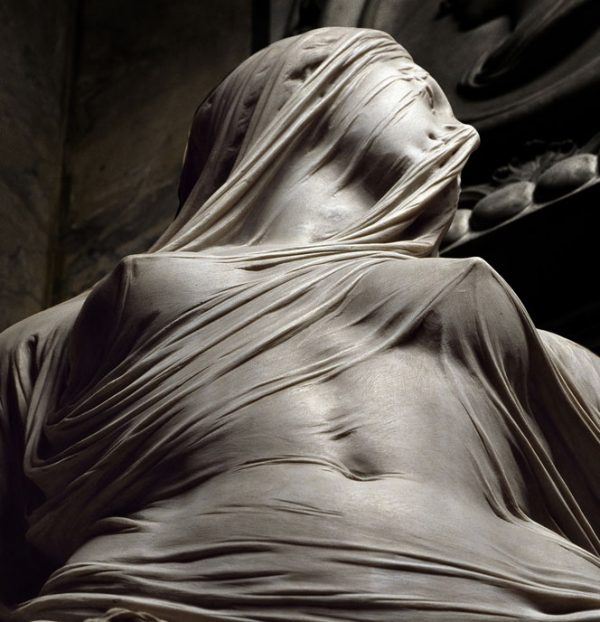 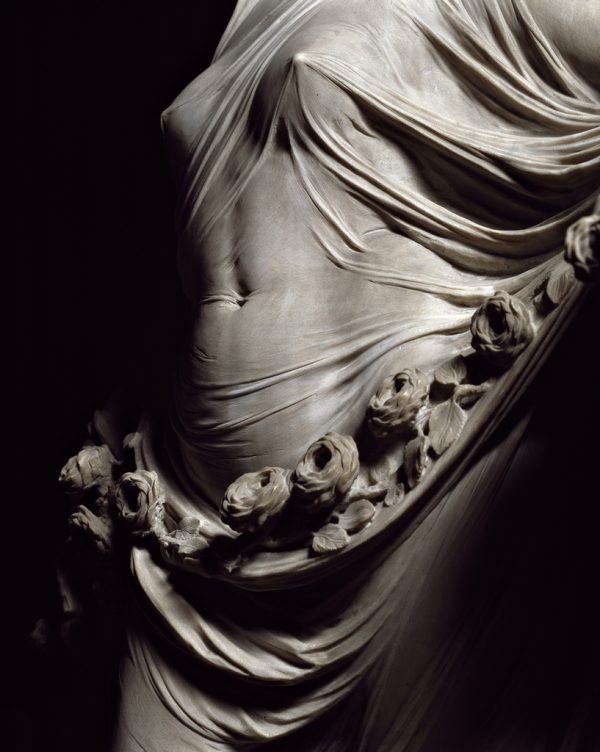 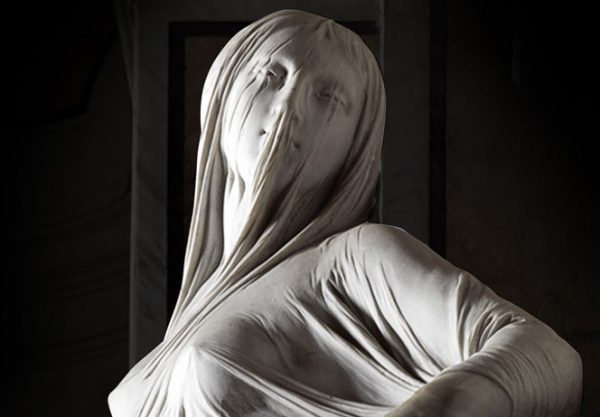 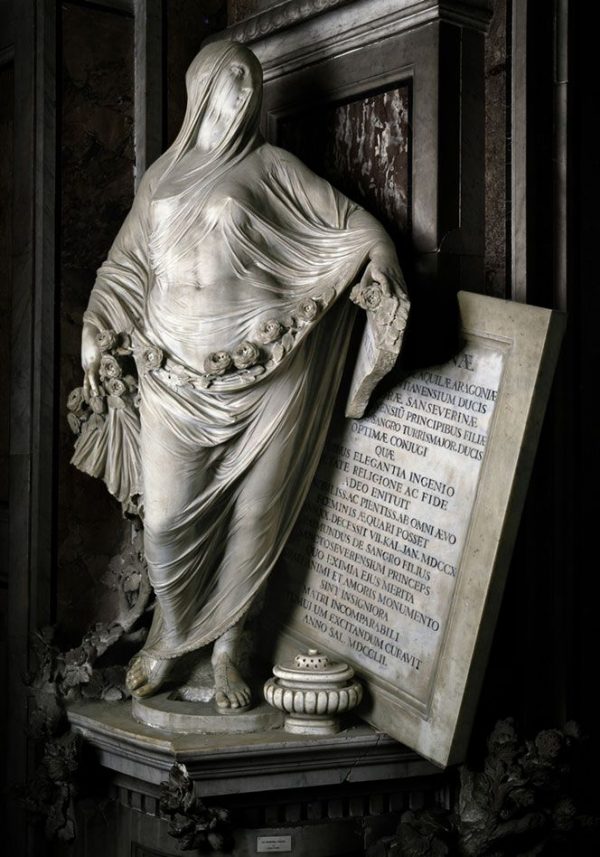 But the attention is mostly drawn by the most famous art piece displayed in the chapel, the Veiled Christ.
This sculpture has fascinated visitors for two and a half centuries, astounding artists and writers (from the Marquis de Sade to Canova), and is considered one of the world’s best sculpted masterpieces.
Completed in 1753 by Giuseppe Sanmartino and commissioned by Raimondo di Sangro, it portrays Christ deposed after crucifixion, covered by a transparent veil. This veil is rendered with such subtlety as to be almost deceiving to the eye, and the effect seen in person is really striking: one gets the impression that the “real” sculpture is lying underneath, and that the shroud could be easily grabbed and lifted. 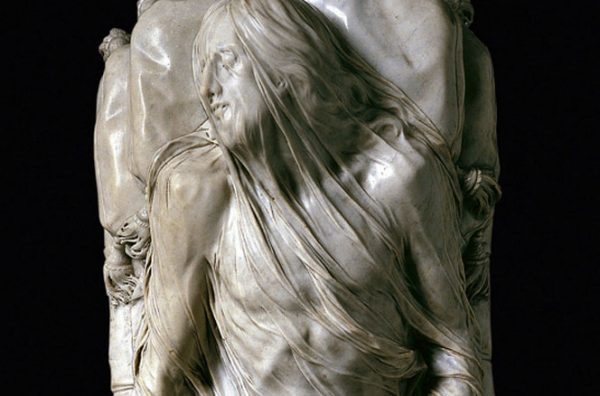 It’s precisely because of Sanmartino’s extraordinary virtuosity in sculpting the veil that a legend surrounding this Christ dies hard – fooling from time to time even specialized magazines and otherwise irreproachable art websites.
Legend has it that prince Raimondo di Sangro, who commissioned the work, actually fabricated the veil himself, laying it down over Sanmartino’s sculpture and petrifying it with an alchemic method of his own invention; hence the phenomenal liquidness of the drapery, and the “transparence” of the tissue. 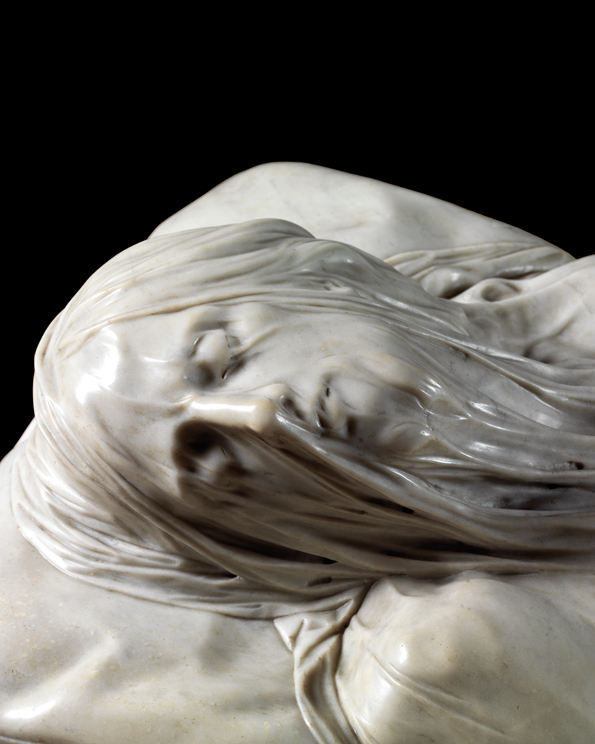 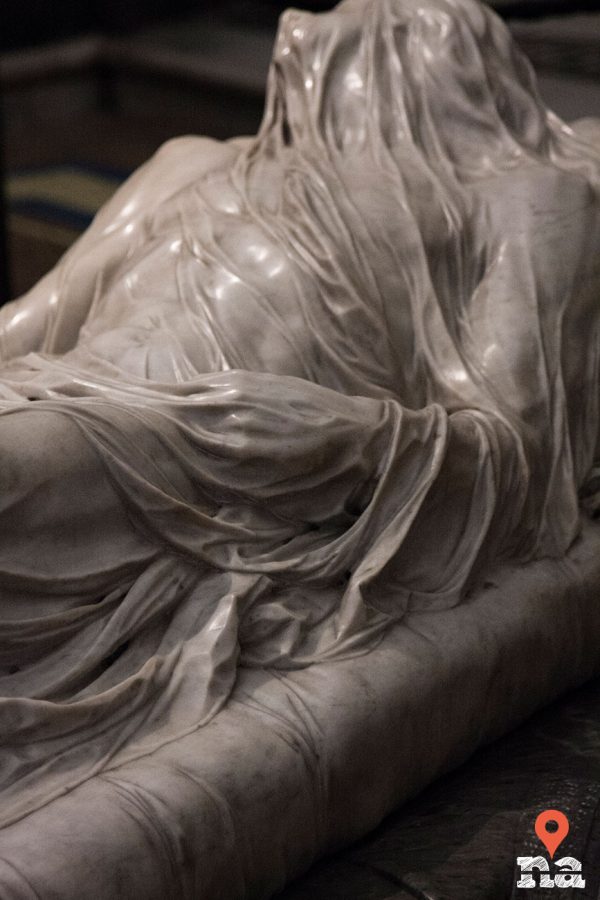 This legend keeps coming back, in the internet era, thanks to articles such as this:

The news is the recent discovery that the veil is not made of marble, as was believed until now, but of fine cloth, marbled through an alchemic procedure by the Prince himself, so that it became a whole with the underlying sculpture. In the Notarial Archives, the contract between Raimondo di Sangro and Sanmartino regarding the statue has been found. In it, the sculptor commits himself to deliver “a good and perfect statue depicting Our Lord dead in a natural pose, to be shown inside the Prince’s gentilitial church”. Raimondo di Sangro binds himself, in addition to supplying the marble, “to make a Shroud of weaved fabric, which will be placed over the sculpture; after this, the Prince will manipulate it through his own inventions; that is, coating the veil with a subtle layer of pulverized marble… until it looks like it’s sculpted with the statue”. Sammartino also commits to “never reveal, after completing the statue, the Prince’s method for making the shroud that covers the statue”. With this amazing contract, comes another document describing the recipe for powdered marble. If the two documents unequivocally prove the limits of Sammartino’s skills, they also show the alchemic genius of Sansevero, who put his expertise at the service of the hermetic doctrine, realizing one of the most important mysteric images of christian symbolism, that Holy Shroud Jesus was wrapped in, after he died on the cross.

Digging a bit deeper, it looks like this “sensational” discovery is not even recent, but goes back to the Eighties. It was made by neapolitan researcher Clara Miccinelli, who became interested in Raimondo di Sangro after being contacted by his spirit during a seance. Miccinelli published a couple of books, in 1982 and 1984, centered on the enigmatic figure of the Prince, freemason and alchemist, a character depicted in folklore as both a mad scientist and a genius.
The document Miccinelli found in the Archives is actually a fake. Here is what the Sansevero Chapel Museum has to say about it:

The document […], transcribed and published by Clara Miccinelli, is unanimously considered nonauthentic by scholars. In particular, a very accurate analysis of the document was conducted by Prof. Rosanna Cioffi, who in note 107, page 147 of her book “La Cappella Sansevero. Arte barocca e ideologia massonica” (sec. ed., Salerno 1994) lists and discusses as much as nine reasons – frankly inconfutable – for which the document cannot be held to be authentic (from the absence of watermark on the paper, to the handwriting being different from every other deed compiled by notary Liborio Scala, to the fact that the sheet of paper is loose and not included in the volume collecting all the deeds for the year 1752, to the notary’s “signum” which just in this document is different from all the other deeds, etc.). […] There are on the other hand certainly authentic documents, that can be consulted freely and publicly, in the Historic Archive of the Banco di Napoli, unearthed by Eduardo Nappi and published on different occasions: from a negotiable instrument dated December 16 1752, in which Raimondo di Sangro describes the statue in the making as “a statue of Our Lord being dead, and covered with a veil from the same marble”, to the payment of 30 ducats (as a settlment of 500 ducats) on February 13 1754, in which the Prince of Sansevero unequivocally describes the Christ as being “covered with a transparent shroud of the same marble”. All this without taking into account one of the Prince’s famous letters to Giraldi on the “eternal light”, published for the first time in May 1753 in “Novelle Letterarie” in Florence, in which he thus talks about the Christ: “the marble statue of Our Lord Jesus Christ being dead, wrapped in a transparent veil of the same marble, but executed with such expertise as to fool the most accurate observers”. […]
All the documentary evidence, therefore, points to one conclusion: the Veiled Christ is a work entirely made of marble. To settle things once and for all, there was eventually a scientific non-invasive analysis conducted by the company “Ars Mensurae”, which concluded that the only material present in this work is marble. The analysis report was published in 2008 in: S. Ridolfi, “Analisi di materiale lapideo tramite sistema portatile di Fluorescenza X: il caso del ‘Cristo Velato’ nella Cappella Sansevero di Napoli”. […]
We believe that the fact that Sanmartino’s Christ is entirely made from marble only adds charm […] to the work. 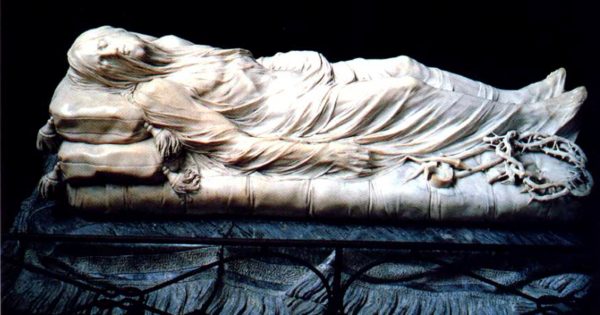 Miccinelli has subsequently found in her home a chest containing an incredible series of Jesuit manuscripts which completely overturn the whole precolonial history of Andean civilizations as we know it. The “case” has divided the ethnological community, even jeopardizing accademic relationships with Peru (see this English article), as many italian specialists believe the documents to be authentic, whereas by the majority of Anglosaxon and South American scholars they are considered artfully constructed fakes. The harsh debate did not discourage Miccinelli, who just can’t seem to be able to open a drawer without discovering some rare unpublished work: in 1991 it was the turn of an original writing by Dumas, which enabled her to decrypt the alchemical symbologies of the Count of Monte Cristo.

The second part of this article is dedicated to another legend surrounding the Sansevero Chapel, namely the one regarding the two “anatomical machines” preserved in the Underground Chamber. You can read it here.

29 comments to The mysteries of Sansevero Chapel – I