They found among all those hideous carcasses two skeletons, one of which held the other in its embrace. One of these skeletons, which was that of a woman, still had a few strips of a garment which had once been white, and around her neck was to be seen a string of adrézarach beads with a little silk bag ornamented with green glass, which was open and empty. These objects were of so little value that the executioner had probably not cared for them. The other, which held this one in a close embrace, was the skeleton of a man. It was noticed that his spinal column was crooked, his head seated on his shoulder blades, and that one leg was shorter than the other. Moreover, there was no fracture of the vertebrae at the nape of the neck, and it was evident that he had not been hanged. Hence, the man to whom it had belonged had come thither and had died there. When they tried to detach the skeleton which he held in his embrace, he fell to dust.

There is something awfully sad yet sublime in the image of two skeletons fixed in a last embrace: two lovers giving shelter to each other as the definitive cold makes its way, seemingly embodying the romantic ideal of love conquering death. “When you die, you always die alone“, sang Fabrizio De André; and yet, these remains seem to have experienced an enviable departure, as it grants the privilege of an extreme and intimate moment of inner thoughtfulness.

Earlier this year, in Greece, on the Diros archeological excavation site, two hugging skeletons were found: a man reclined behind a woman. These remains date back to 3.800 B.C., but even if “double” burials are quite rare, the one in Diros is actually not the only nor the most ancient one. 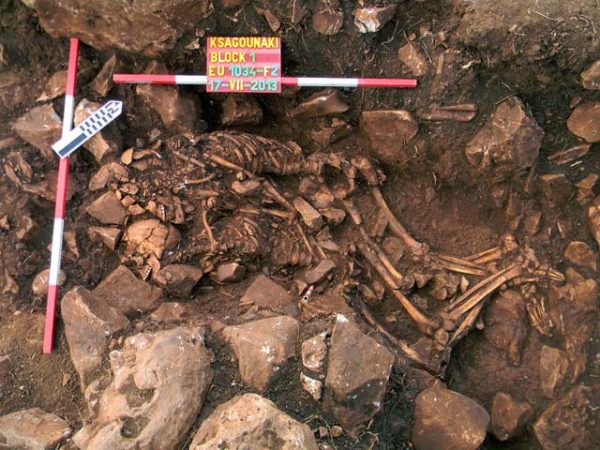 At the Archeological Museum in Mantua you can admire the so-called Lovers of Valdaro. The datation is neolithic, around 6.000 years ago. Their fetal position is typical of his kind of burials, but the two were layed down together. 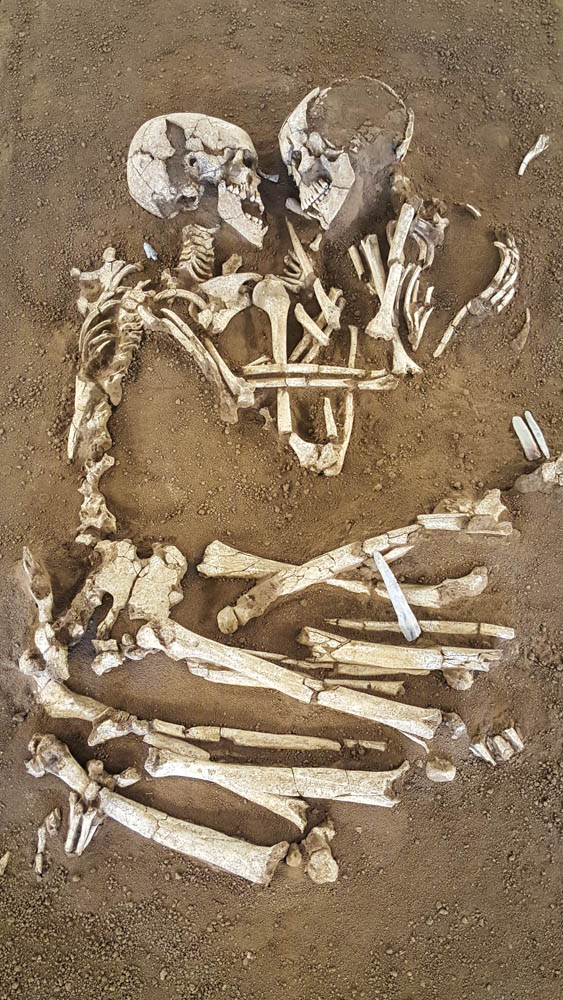 And yet Mantua’s record of the “World’s most ancient lovers” is defied by the skeletons found in 2007 in the Turkish region of Diyarbakir, dating back to 8.000 years ago. They too are suspended in this final embrace for which we might never know the actual reason, as their love story flourished and ended before recorded History.

Once again in Greece, in the region of Agios Vasileios, a few kilometers south of Sparta, two skeletons came to light in a similar position, and they date back to 1.600-1.5000 B.C.: these two lovers are laying on their side, and the man’s hand sustains the woman’s head in a delicate gesture, unaltered after more than three millennia. 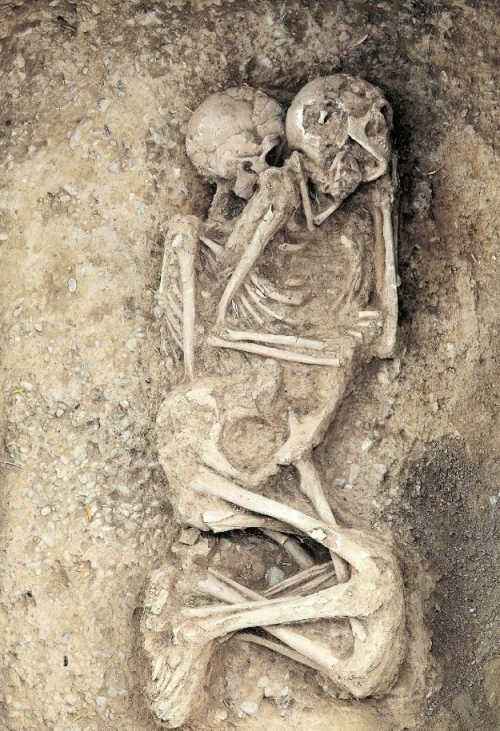 Among the 600 tombs excavated in the Syberian village of Staryi Tartas and dating back to the Andronovo Culture, some dozens feature double burials, or even family burials. The archeologists can only guess the origin these graves: are these traces of sacrificial rites, or were these collective graves meant for the souls to travel together to the afterlife? 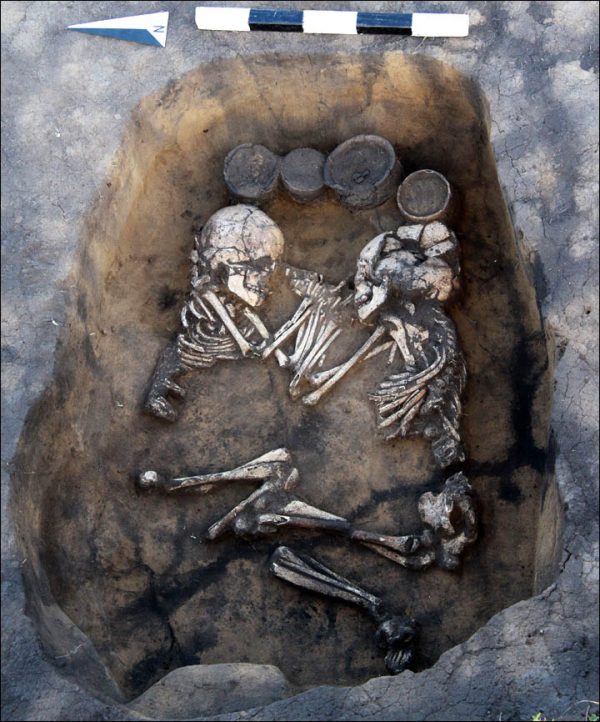 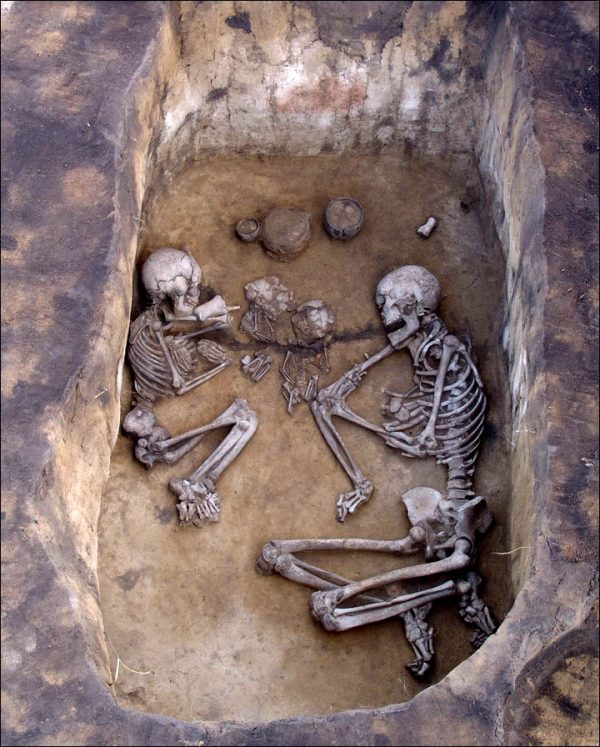 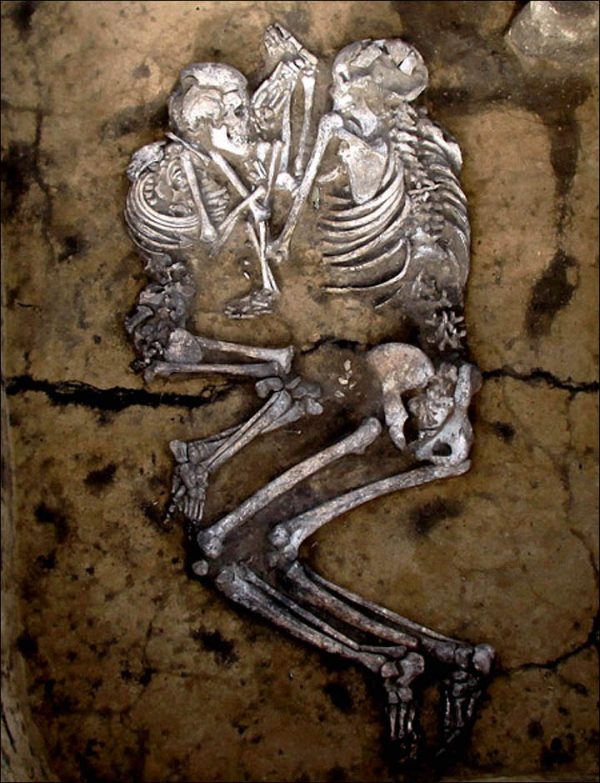 In the archeological site of Teppe Hasanlu, Iran, two other lovers were found lying face to face inside a brick bin. Researchers believe the two hid inside that bin to escape the ancient citadel’s destruction, occured at the end of IX Century B.C.; as they conforted each other, amidst the cries of massacre, they probably died by asphyxiation. 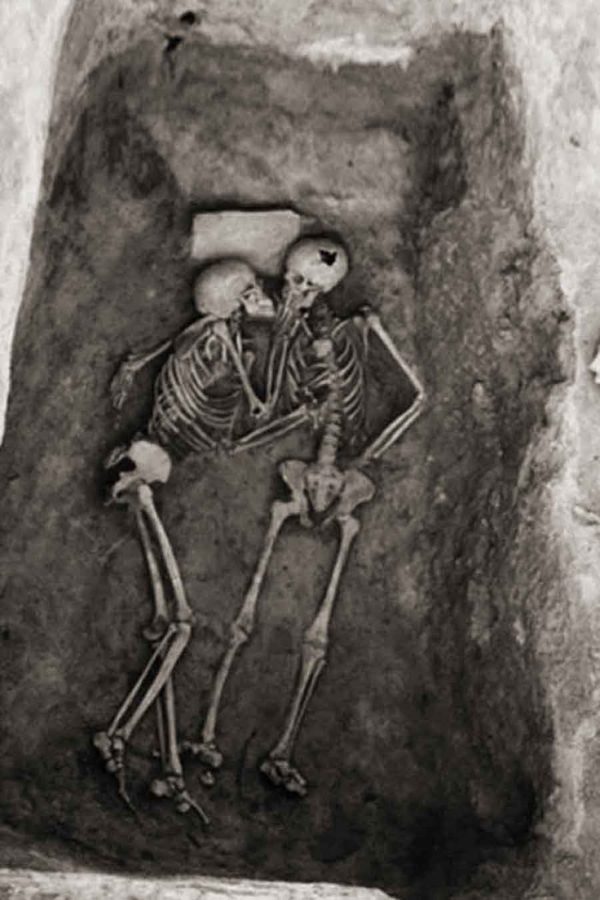 Lovers clinged to one another even during another kind of destruction: the terrible eruption of Pompeii in 79.B.C. sealed under the ashes some couples in the act of protecting each other. 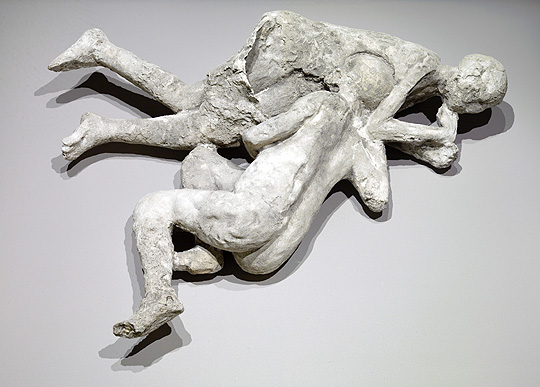 The “lovers of Modena”, located some years ago while building an apartment block, date back to V-VI Century A.D. The two are holding hands, and the woman looks towards the man; it is believed that he was staring back at her, until the cushion under his head deteriorated, misplacing the skull. 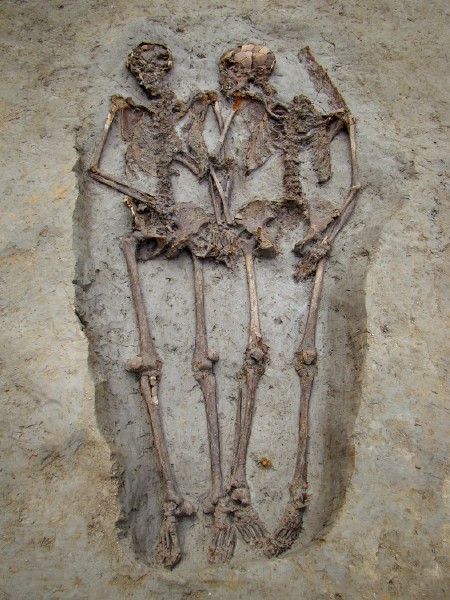 More recent, but certainly not less striking, are the skeletons found in Cluji-Napoca, Romania. The man and woman, who lived between 1.400 and 1.550, were buried fcing each other, holding hands. According to the first reconstructions, it seems the man might have died in an accident or a violent fight (his sternum was fractured by a blunt objet), while the woman might have died of a broken heart. 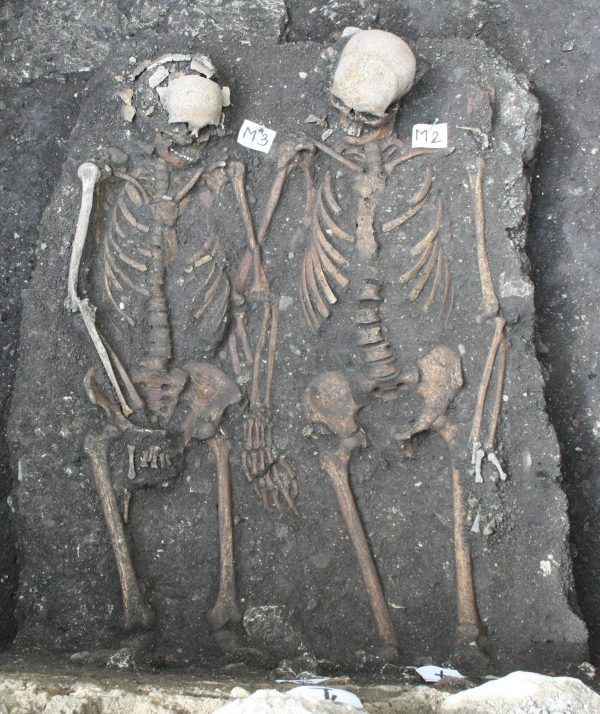 We would like to end with the most touching, and recent, example. In Roermond, Netherlands, there are two really exceptional graves: those of Infantry Colonel J.W.C. van Gorcum and his wife J.C.P.H van Aefferden. Married in 1842, they stayed together for 38 years, until in 1880 the Colonel died, and was buried in the protestant lot of the town cemetery. His wife, who was catholic, knew she could not be buried beside him; she decreeted that her remains were not to be interred in her family tomb, but as close as possible to her husband’s – just on the other side of the wall dividing the prostestant section from the catholic one.

Since she died, in 1888, the two monuments have been holding hands, over the barrier which tried to keep them separate, in vain.

12 comments to The last embrace