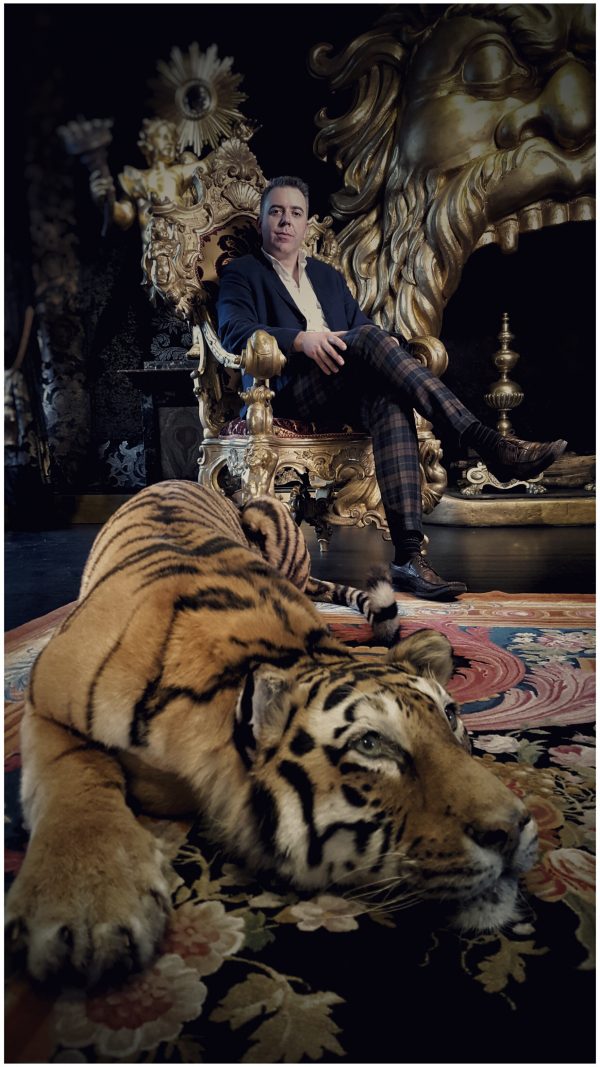 Luca Cableri is a man devoured by an endless passion.
An art dealer and a collectionist, he has been studying the history of wunderkammern for decades; yet when he talks about it, his eyes still light up. Anyone who insists in searching for wonder, does so because he refuses to forget the gaze of the child — the child he was, the child we all once were.

Luca’s spectacular creation is Theatrum Mundi, a most original and atypical wunderkammer right in the middle of Arezzo’s historical city centre.
Upon crossing the gallery’s threshold, the visitor enters a puzzling space: under the beautiful frescoed vaults of the nobile palace hosting this collection, ancient and modern wonders can be admired — dinosaur skeletons and space suits, original editions of Aldrovandi’s Monstrorum historia and ritual cannibal forks, exotic taxidermies and contemporary design installations. 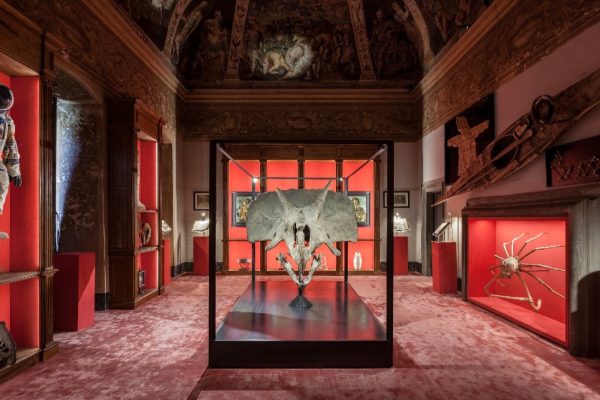 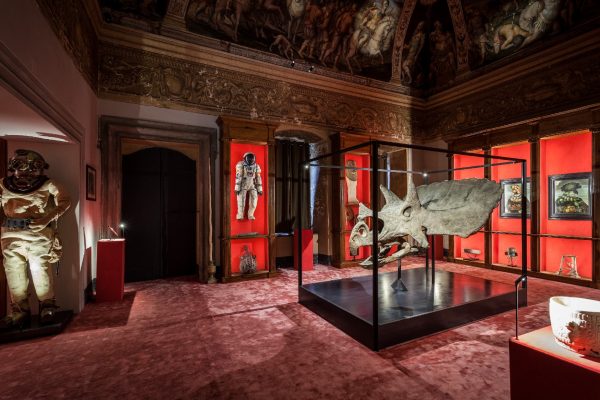 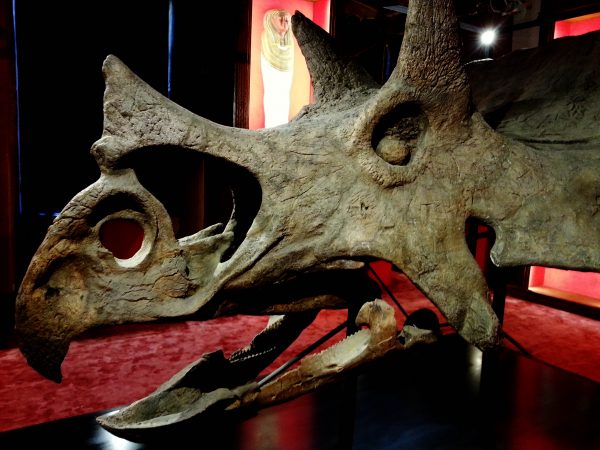 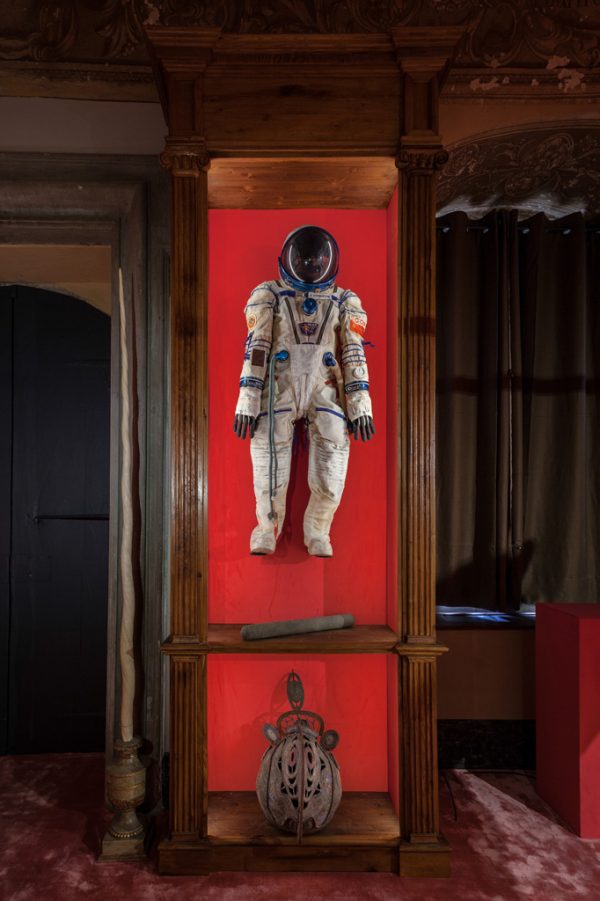 These “heretical” juxtapositions of objects of classic museology and references to pop culture are not in the least arbitrary, but they follow a philology that aims at showing the evolution of the concept of wonder through the centuries. If the stuffed crocodile hanging from the ceiling was once a true icon of astonishment (no wunderkammer was complete without a crocodile or a narwhal tusk!), a modern collector cannot ignore contemporary conjugations of wonder: that’s why on exhibit at Theatrum Mundi you can also find specimens of the Space Age or relics coming from younger arts, such as cinema. 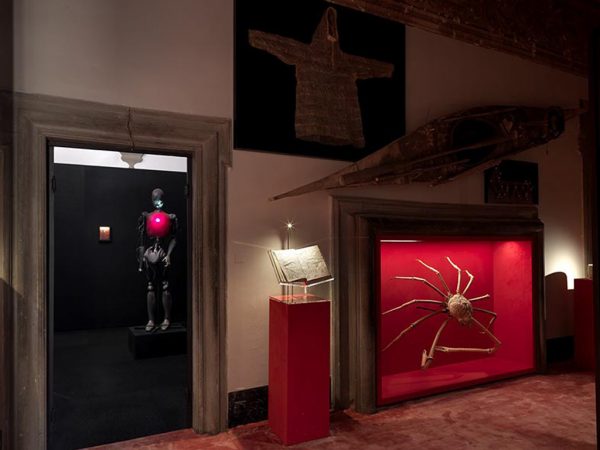 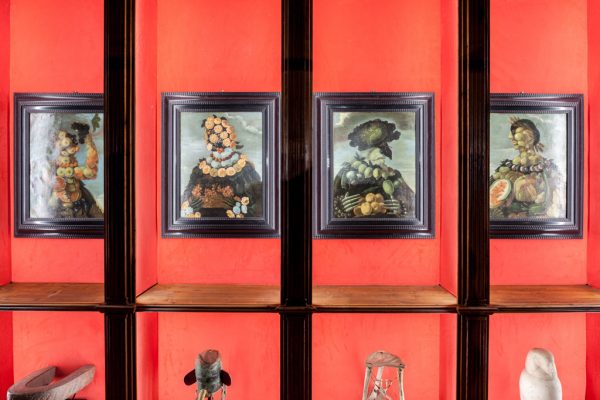 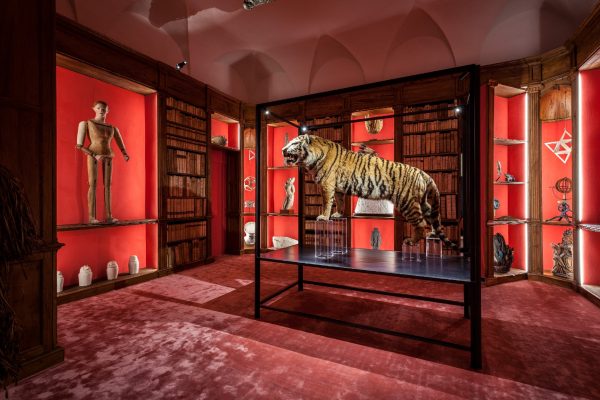 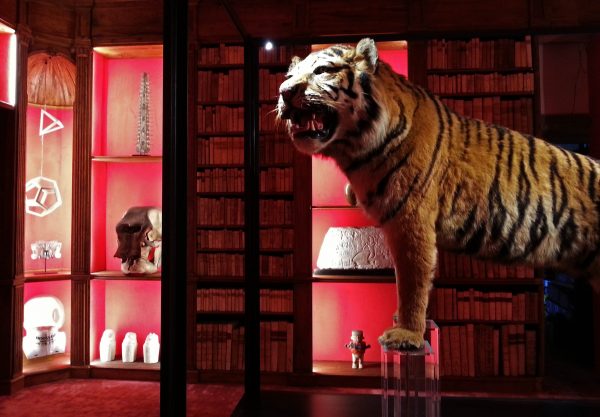 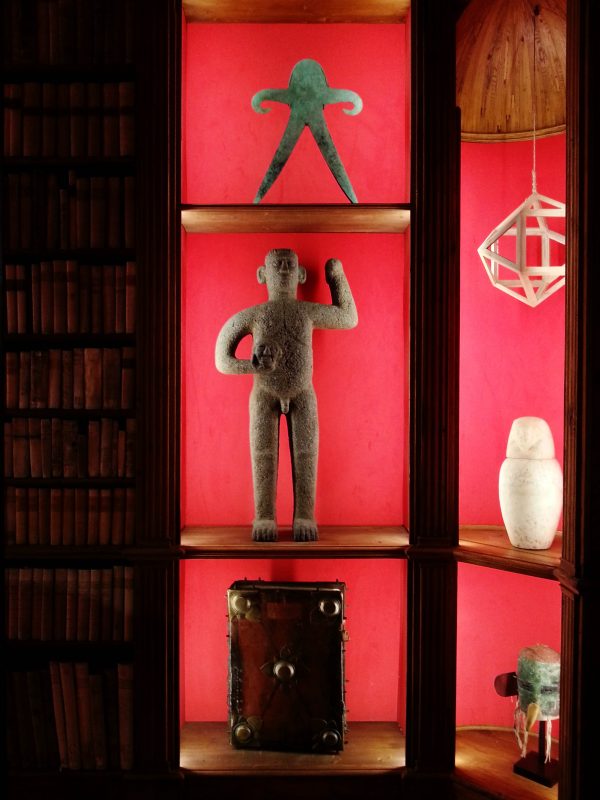 Luca follows this aesthetics with a surrealist and somehow snarky attitude, exhibiting for instance a shamanic mask next to the one used in Jim Carrey’s The Mask.

The project Theatrum Mundi testifies that the concept of wunderkammer can be still relevant today, and it has the merit of proposing a way to update it. With his personal method of giving new life to the art of collecting and displaying curiosities, Luca is also inviting us to come up with our own. 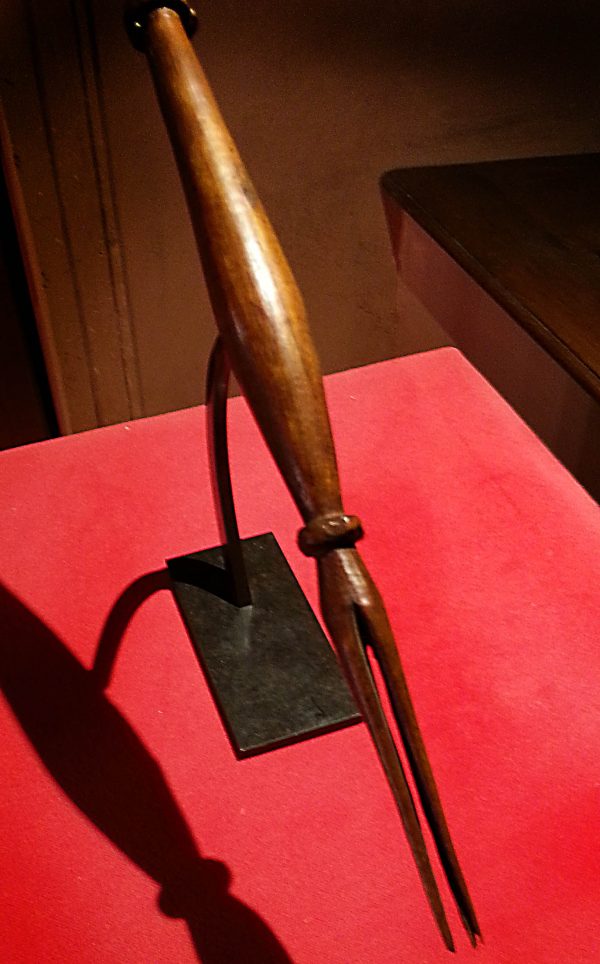 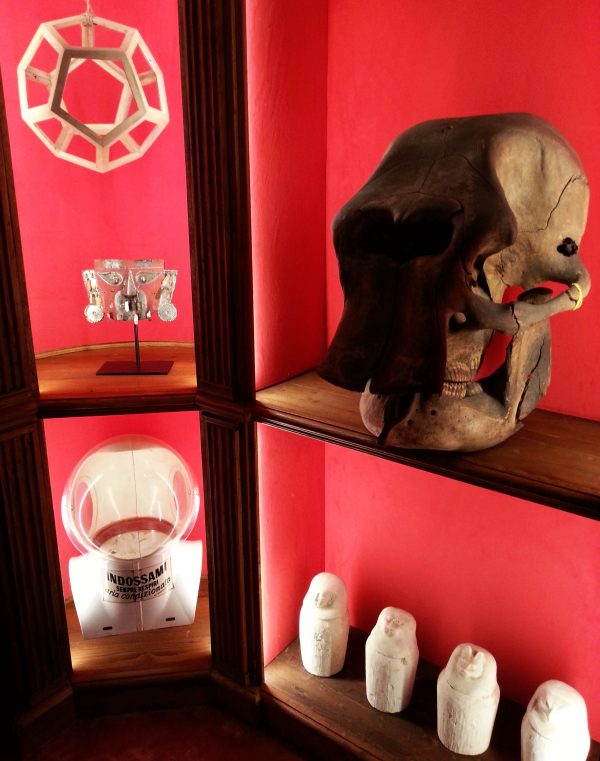 In October I invited Luca for a talk for the Academy of Enchantment, at Giano Del Bufalo’s Mirabilia Art Gallery in Rome; and though all our evenings received a wonderful feedback, his talk was sold out in just a few hours.
Considering the interest, I thought I would ask him some questions for Bizzarro Bazar, for the benefit of those who could not attend his lecture on how to “reinvent” a wunderkammer.

Do you remember how your love for cabines of wonders started?

It all began when I was very little, my father used to take me down to the river where I would collect rocks and sticks that had unusual and almost alien shapes; then came the passion for seashells and after that, when I was in my teens, I dabbled in patchworks, cutting magazines in search for all the most bizarre images that stroke my imagination.
At the University I discovered the concept of wunderkammer and I was immediately fascinated. I studied a lot, started visiting exhibitions and museums… and so now, my job is to collect wonders.

I believe your work at Theatrum Mundi has the great merit of denying an axiom that many take for granted: the idea that wunderkammer collecting is only a subgenre of antique collecting. Do your combinations of ancient and modern pieces often upset the purists?

The gallery Theatrum Mundi in Arezzo, which I opened together with my partner Iacopo Briano, was a big “calculated gamble” in a period of economic crisis and of hardship for classic antique dealers. It was really innovative on our part to try and propose meteorites, space suits, dinosaurs, pre-Columbian masks, Egyptian sarcophagi or original movie props, and when you’re trying something new you will always be met with a bit of suspicion and criticism. Everything unknown or undermining normality looks a tad scary in the beginning. But many classic antique dealers, after turning up their noses at first, began appreciating our approach to wunderkammern. There is also an undisputed advantage in exhibiting in the same room, with all ease, a Roman bust and Batman’s original suit, a ritual New Guinea mask and a contemporary painting. The important thing is giving the objects a chance to “converse” between themselves. 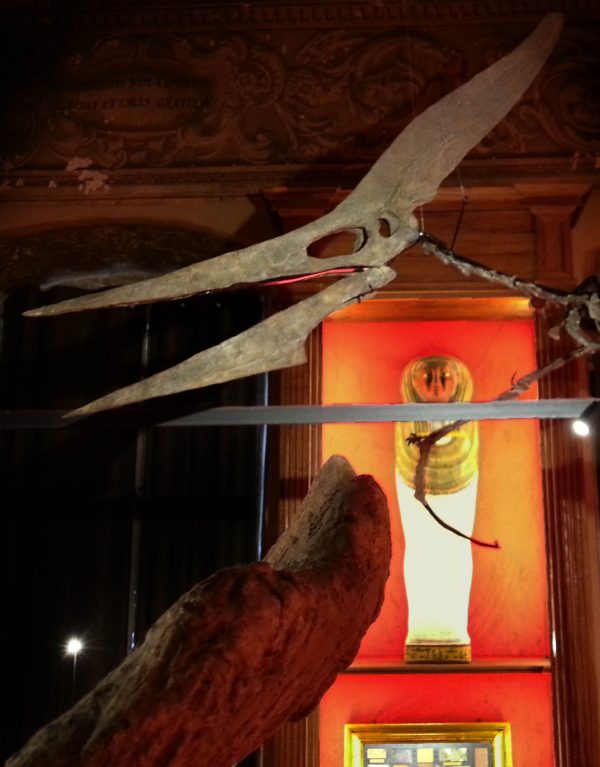 Is there really an idea — a unique, precise concept — of wunderkammer? What is the element that defines e a collection as belonging to this “genre” of collecting?

The fundamental element characterizing a wunderkammer is of course wonder: the objects have to be surprising, either for their aspect, their history or their function.
Princes and high aristocracy were the first to collect all their time’s curiosities inside one room, to surprise their astonished and amazed guests.
Therefore if we consider the classic concept of wunderkammer (which evolved from XV Century kunstkammer, and went on to have its biggest fortune during the XVI Century, across all Europe), the essential charateristics was the presence of four categories. Objects of nature coming from the Indies, the Americas or from Africa were called naturalia. Imagine how astonished Europeans must have been upon seeing the first rhino or giraffe. Mirabilia, instead, were objects created by Man — think of the great jewellery artworks, in which goldsmiths created fantastic and precious figures. Exotica meant everything that came from very far away, from beyond the Pillars of Hercules: natives costumes, their artistic production. And finally there were scientifica, objects of the new science, astrolabes, globes, telescopes, automata.
In the XXI Century, these categories are still valid in order to properly define a cabinet of wonder, but I felt the need to update them. Therefore I include in my naturalia section fossils and dinosaurs, in mirabilia original movie props like Darth Vader’s mask or Russel Crowe’s gladiator armour; within the exotica, which in a globalized world like ours have lost their original connotation, find their place the meteorites; and in the scientifica I place everything related to the conquest of space, like a piece of a shuttle, or a space suit that actually travelled in the cosmos.
These are just examples, of course, everyone is free to create his personal wunderkammer following his own taste, culture and collecting disposition. The important thing, I think, is keeping in mind these four main categories, unless the whole collection ends up being just a miscellaneous set of objects. 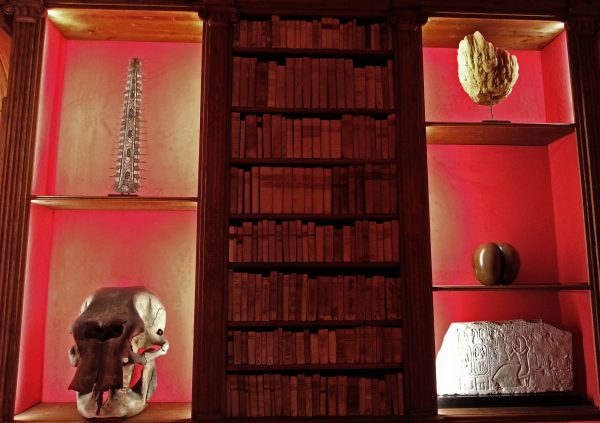 In my experience, the more you look for wonder, the more wonder comes to you: the circumstances in which you find yourself are often bizarre and surreal. What is the latest strange thing that’s happened to you?

Years ago in Paris I bought a relic-mannequin, the Niombo of the Bwendè statuary art, a big human-like doll made of straw and tissue. I liked its bizarre shape and the tattos painted on his chest. There was a fantastic story attached to it, because it is said that these objects contain the remains of a dead shaman who, through the puppet’s arms, acts as a medium between the Gods and the people.
I placed the object in my catalogue, and some time ago a collector called me from Southern France. He said he was interested in the Niombo, on one condition: it had to have bones inside, otherwise it meant it was only a decorative gaff, created to fool gullible tourists in the Fifties.
So I took the doll to the Arezzo Hospital, in the radiology department. Among the general curiosity and hilarity we X-rayed the doll, scanning from its feet up to the head without any result… then all of a sudden, with great surprise, there was our much sought-after bone. Hooray!

Venturing into this kind of research also has, in my opinion, one further appeal, and it’s the human factor. The people you meet while chasing a particular piece. Some collectors are as eccentric as their collections! Who is the most extravagant person you have ever met?

That must surely be one American collector with a passion for minerals and fossils. One evening, at a trade fair, he invited me to his immense ranch near Tucson, Arizona, and showed me his huge collection. I was left speachless because of the vast number and the quality of the objects, this guy had virtually everything!
After dinner we sat on the porch to admire a wonderful starry sky, sipping beer. In those latitudes, out in the desert and without light pollution, the night sky seems closer and much more beautiful.
At one point he confided his forbidden dream to me: he said there was one mineral he still did not possess. So I asked him which one, and he pointed at the moon. He wanted a real piece of the moon. I therefore started a frantic research and I found out that in Eastern Europe there was a small fragment donated by an American President to an ambassador… but sadly I also discovered it was illegal to trade in lunar specimens. So I fell back on an extraordinary fragment of lunar meteor to comply with my interlocutor’s request.
He was not discouraged, on the contrary; he told me that in the following years he woud contact some retired NASA engineers to have a private rocket built that could land on the moon, collect a sample, and come back to Earth!

Regardless of the different economic resources, all collectors that we meet are just like that: eternal dreamers.
This is why I often think of my father, who used to say to me, when I was a kid: “I’m curious to find out what you’re going do when you grow up”… Well, today I can honestly say that I am proud to be a “wunderkammer man”, a seeker of the impossible and the wonderous! 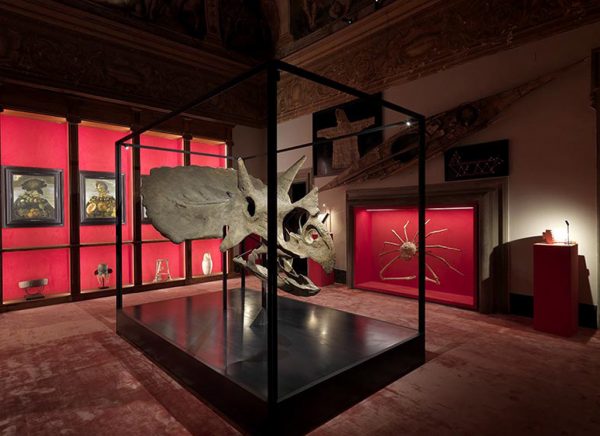 Here is the  official site of Theatrum Mundi.