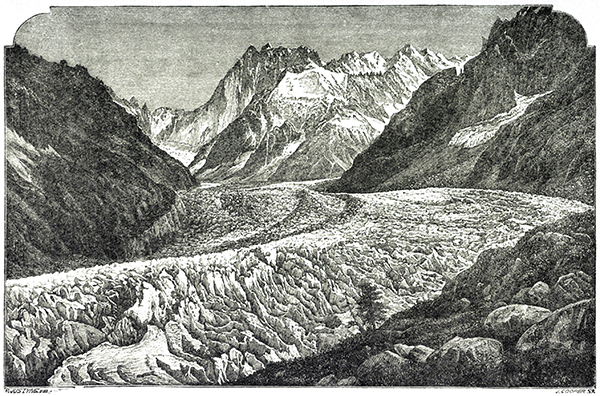 In a mountain landscape which is getting increasingly civilized, anthropized and crowded by tourists, it is difficult to find the bizarre. Monsters have left for some faraway, inaccessible places. A teratological migration that concerned the Alps, even before other liminal areas such as the Carpathians or the mountain of northern Norway, where maybe some small group of trolls still barely survives escaping the expansion of human settlements.

Yet for centuries, until the mid-1700s, the most impressive and grandiose mountain range in Europe was a natural object better observed from a distance. People looked at the peaks only through binoculars or by means of some other natural observations which did not imply any dangerous approach to the observed object. The modern passion for heights, and the even more recent determination to set foot on the highest peaks in the world, did not interest travelers or naturalists back then at all. In the midst of civilized Europe, the Alps and its highest mountains were regarded with a slight indifference by explorers and with total distrust on the part of those who were forced to live with the reality of those landscapes.

A troublesome and uncomfortable reality for those who dwelled in the Chamonix valleys or the nearby village of Courmayeur during the Little Ice Age, when ice tongues became more intrusive and insidious.
The very toponymy of those places confirms this perception of danger and fear, as it makes use of names that are anything but reassuring, Maudit or Dolant, to indicate places which instilled a sense of suspicion, if not sheer terror. As Elisabetta Dall’Ò points out (in I draghi delle Alpi. Cambiamenti climatici, Antropocene e immaginari di ghiaccio), the reason is to be found in the progressive growth of ice tongues near Alpine villages, which began the 15th century with often fatal consequences for the inhabitants. The detachment of gigantic blocks of ice caused frequent obstructions of watercourses with in turn resulted in terrible floodings. The  glaciers’ progressive extension subtracted fertile soil to agriculture and pastures to cattle farms. It is in this ecological and socio-economic context that the legends about dragons and monsters first began to emerge. A folklore that has its roots in the etymology of the word “dragon”, which is associated with water: both in its liquid and solid form. The dragons of the Alps haunted the local imagination, fierce beasts capable of destroying entire villages in one night. The glaciers descending into the valley turned into threatening and unpredictable dragon tongues. And unpredictable they were, both for the superstitious inhabitants of the villages and for scientists or naturalists who, until the end of the 17th century, had been careful not to set foot on the cold alpine moors. Exploring exotic, remote islands was thought to be more interesting — and meteorologically more welcoming.

We mentioned the relationship between dragons and water, and across the Alps we find the term dragonàre with the meaning (in the Napoleonic era) of flooding, or the word dracare as a synonym for a heavy snowfall. The history of dragons in the Alps, however, goes back even further in time, since the foothills regions often mention the presence of dragons in their founding myths. It was a dragon that threatened the town of Augusta Taurinorum (the ancient Turin), until a red bull defeated it. Another dragon infested the Loo area (in the Aosta Valley region) and was once again put to flight by a young bull. 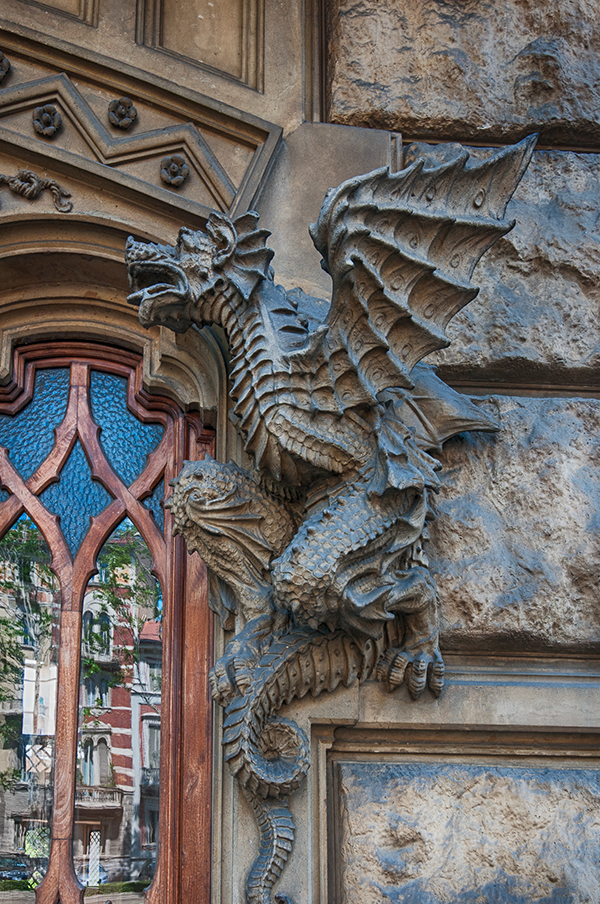 But let’s go back to the properly alpine dragons, which is the topic we are interested in. Just like it interested many 18th-century naturalists and scholars who collected several accounts of dragon sightings. Edward Topsell, an English cleric who lived between the 17th and 18th centuries, provided a brief classification in his work The History of Serpents. In the section dedicated to dragons we find that:

There be some Dragons which have wings and no feet, some again have both feet and wings, and some neither feet nor wings, but are only distinguished from the common sort of Serpents by the combe growing upon their heads, and the beard under their cheeks. 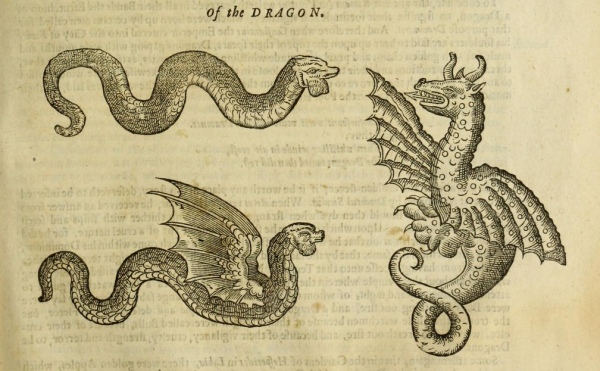 Topsell’s scientific “consultant” was one Conrad Gessner, a native of the Alpine region; born in Zurich in 1516, he was the author of some of the drawings that appeared in the book. It seems unlikely that Topsell actually believed in the existence of these creatures, but what matters is his bizarre and detailed description of (real) animals alongside monsters and naturalistic oddities.

The fact that Edward Topsell himself had never set foot in the Alps makes his account not particularly unreliable; other naturalists and explorers, such as Johann Jakob Scheuchzer, could boast a much greater familiarity with the Alpine landscape. Scheuchzer was born and raised in Switzerland, he was a member of the Royal Society and undertook his first scientific journeys in the Alps starting from 1693. Not immune from huge mistakes, such as interpreting fossils as remains of the Universal Flood, he was nonetheless a careful and curious explorer who during his research collected some terrible and picturesque tales about the dragons inhabiting the Alps at the time.
In his 1723 expedition account (Itinera for Helvetiae alpinas regiones) we find a series of curious and intriguing representations of mountain dragons, bearing striking similarities with the dracological classification present in Topsell’s work. Scheuchzer wrote about the two most common dragons of the Alpine arc, according to the collected evidence: the Tatzelwurm and the Lindworm. 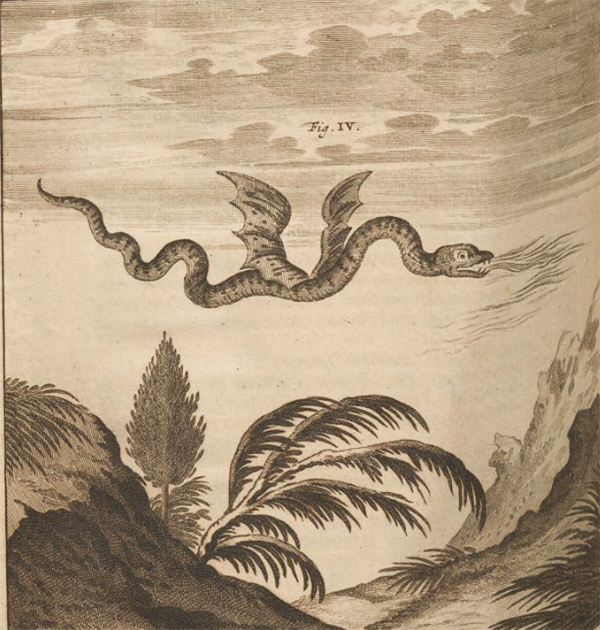 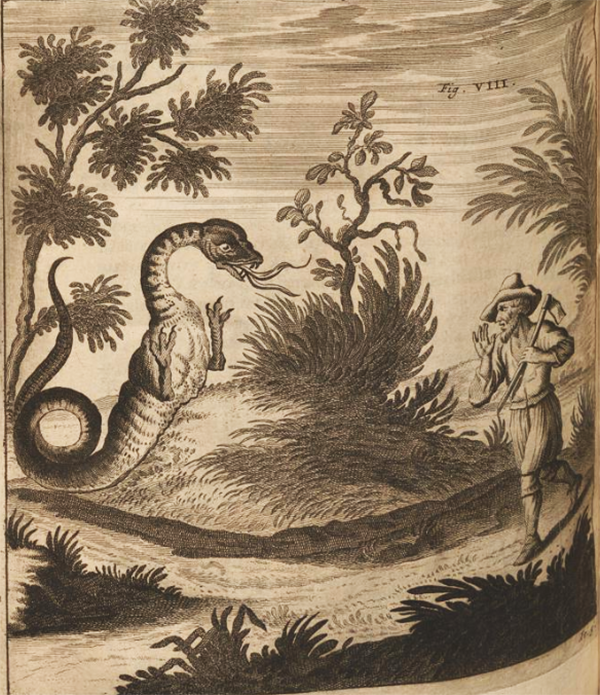 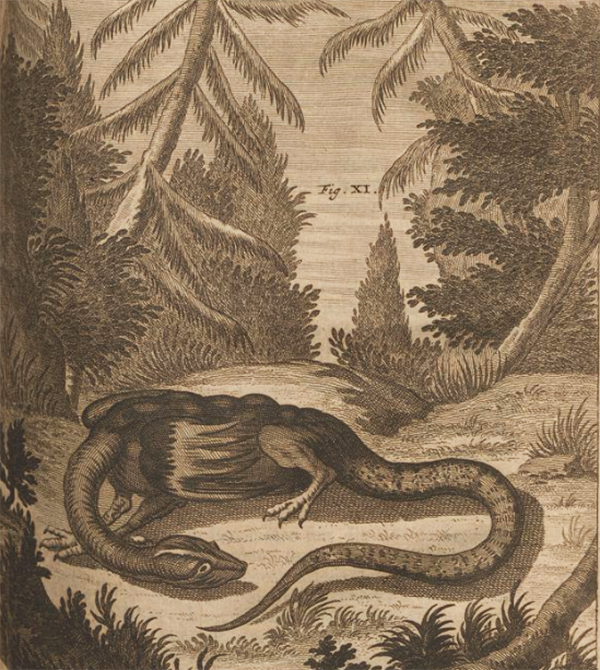 Unless you are an expert in dragons, it might be useful to summarise the morphology of the different dragon species we encountered so far:

According to collected oral evidence, the first two species seem to be the most common in the Alps; the other three can be found in the films of Hayao Miyazaki, in the books of George R. R. Martin, and the dragon which infested the hills around Bologna is mentioned in Ulisse Aldrovandi’s Serpentum et Draconum historiae libri duo, published in 1604. If you have never heard of Aldrovandi, it is worth taking a look at Dario Carere’s article about him, here on Bizzarro Bazar. If you want to see the famous Bologna dragon as Aldrovandi described it, follow this link (the creature in question is on page 404).

And since Ulisse Aldrovandi was certainly fond of monstrous and bizarre figures, in his Serpentum and Draconum historiae he provided a series of four drawings of winged dragons, both bipedal and legless. 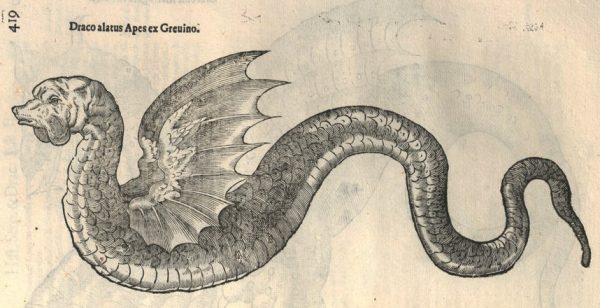 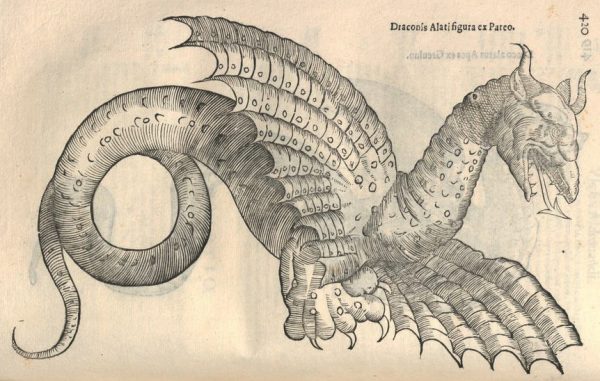 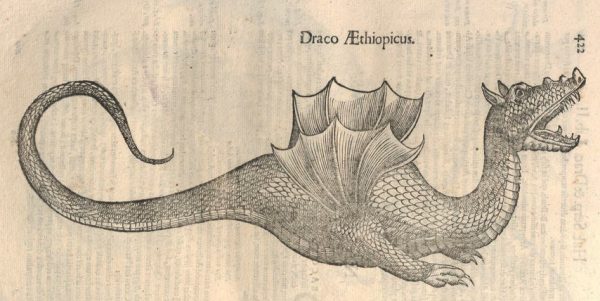 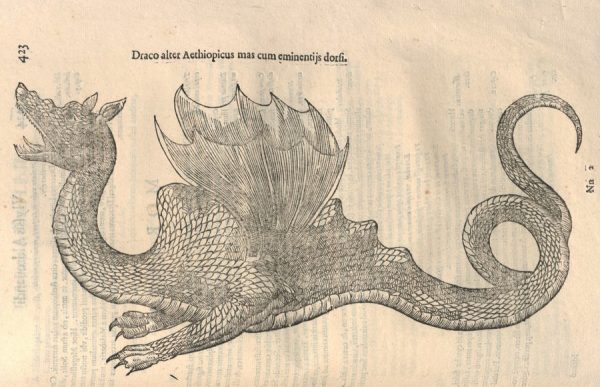 Ulisse Aldrovandi was a typical 17th-century scholar, combining scientific curiosity with a wider interest in all things bizarre, monstrous and amazing. A disposition which was not shared by Swiss naturalist and scientist Horace Bénédict de Saussure who, in fact, in his numerous explorations of the Alpine mountains, found no evidence of drangons. In the second half of the 18th century the alpine folklore regarding dragons underwent a slow and inexorable impoverishment. Where monstruous and fearsome dragon tongues were once ready to swallow entire villages, de Saussure’s scientific curiosity only meets natural objects and phenomena that must be understood, studied and explained.
This was the same scientific curiosity which led to the first tourist incursions in one of the largest and most fearsome “dragons” in the Alps: the Chamonix glacier. We can trace the discovery of the Mer de Glace to the summer of 1741, as a party of reckless British mountaineers undertook an adventurous climb and came in view of a glacier which until a few years before was populated by dragons and demons.

This marked the beginning of glaciological tourism which, in the decades to come, would make the French resort of Chamonix famous among mountain enthusiasts. Chased away by crowds of tourists and mountaineers, the dragons of the Alps were forced into retreat, as they witnessed from a distance the rising of hotels, cable cars and accommodation facilities. Of course, their territory was still scary, arousing awe and wonder in those who came to see those mountains. Mary Shelley set a scene of Frankenstein on the Mer de Glace, which she visited in the company of her husband in 1816. But it was a fascination akin to the one which can still be felt by riding the Mont Blanc cable car, looking down on the breath-taking view of the glacier from a suspended cabin. Quite different, that is, from the fear of the unpredictable, the terror of what cannot be explained or controlled.
Within a century, the Alpine territory changed so radically that today it is difficult to believe those places were once populated by dragons and demons. It is natural to associate the withdrawal of dragons with the current conditions alpine glaciers are facing. Natural, of course, but also necessary: because envisaging a snowless Mont Blanc can help understand where the fearsome dragons of the Alps have gone. This is how folklore, legends and traditions are linked to ecology; when a landscape is transformed, the representation that its inhabitants make of it changes accordingly.
The dragons have disappeared from the Alps; and not just them.

2 comments to Dragons of the Alps