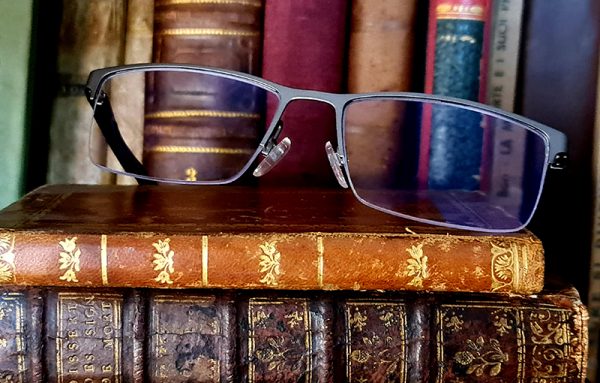 At the age of 18 I had eye surgery, thus getting rid of the glasses I wore since I was a child.
But many years spent between books and laptops, for twelve hours a day, begin to take their toll, and now I’m back to putting on glasses again. I thus rediscovered an enchantment that I had almost forgotten.

Wearing glasses has a double advantage: you can put them on, and take them off.
You can look at things clearly when you need to. If, on the other hand, I take off my glasses and don’t try to focus, rather I relax the muscles around my eyes as much as possible, reality becomes an impressionist painting. The tiniest or most distant details merge into esoteric forms, the identity of which I delight in guessing or inventing, looking for the most implausible solutions (I know that indistinct shape looking out the window above cannot be a horse’s head, but what if it was?). While walking in the park, I can even pretend to be an explorer of an alien world, with my helmet visor fogged up!
In the twilight, then, each room becomes mysterious. My own collection — as I often change places for the various pieces — is no longer familiar to me, if I look at it from a distance. I no longer remember what I put on that shelf, but there’s an object that appears as a soft and uncertain, milky brush stroke… it would be enough to put the glasses back on to know exactly what it is, and it’s enough to not put them on in order to stay lost in the reverie. 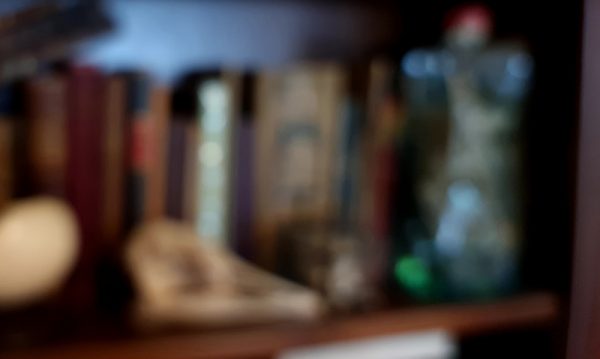 Yet it is not just a game. Having these two senses of sight available gives access to two different sensitive realities. One is defined, and allows to be navigated in safety; the other is of an imperfect and wavering beauty, as if lit by a flickering candle. One is dry, the other soft. One is subtle and precise, the other full of nuances.
They are complementary perspectives, even on a philosophical level: seeing everything clearly is useful but sad, like always being sober; seeing blurred gives access to the particular poetry of the unfinished but it is incapacitating, like always being drunk.

In his book In Praise of Shadows, Jun’ichirō Tanizaki wrote:

Remove the lid from a ceramic bowl, and there lies the soup, every nuance of ist substance and color revealed. With lacquerware there is a beauty in that moment between removing the lid and lifting the bowl to the mouth when one gazes at the still, silent liquid in the dark depths of the bowl, its color hardly differing from that of the bowl itself. What lies within the darkness one cannot distinguish, but the palm senses the gentle movements of the liquid, vapor rises from within forming droplets on the rim, and the fragrance carried upon the vapor brings a delicate anticipation. What a world of difference there is between this moment and the moment when soup is serverd Western style, in a pale, shallow bowl. A moment of mystery, it might almost be called, a moment of trance.

And finally there is one last wonder: without glasses, I can observe my own gaze. That is, I can concentrate on the “filter”, that slight blur that stands between me and reality and makes my vision so indecipherable. I am allowed to contemplate slight changes in the way the world presents itself: according to the light, to my own tiredness, to the dispositions of my heart.

This filter is the gift that time has given me, passing over my eyelids and depositing the patina of the past.

In this episode of season 2 of Bizzarro Bazar, produced in collaboration with the Civic Museums of Reggio Emilia: the secret behind the grotesque wedding organized by Tsar Peter the Great; the story of a sperm whale cub that beached in Italy in the 1930s; the black flood that swept a neighborhood in Boston in 1919.

In this episode of the second season of Bizzarro Bazar, produced in collaboration with the Civic Museums of Reggio Emilia: a doctor who wanted to solve psychiatric disorders with dentist pincers; a strange and monstrous fish that belonged to Lazzaro Spallanzani; the goth prostitutes of ancient Rome.