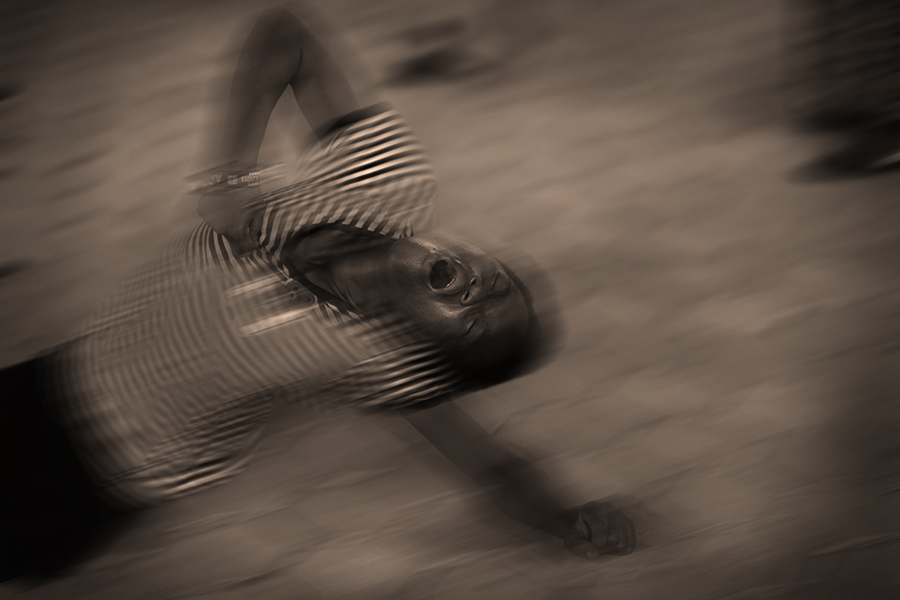 The only time I’ve ever seen a person possessed by a “demon” was during a stint in Tanzania. I was in Dar es Salaam together with a shambling crew, composed mostly of friends, to shoot television footage in the finest residences as well as in the slums of the city; a project devoid of sense and future, which would have lost us quite a lot of money (also on the account of our ignorance of the local culture and mentality, at the time of accepting the assignment), but which had catapulted us into a dreamlike dimension.

One evening we were filming a concert in a nightclub — which I certainly could not locate now, since many streets in that city have no name. When the work was done, we had stayed for a drink.
At a given moment, something happened. The young girls on the dance floor took to courting the males with unrestrained mapouka. It had all happened in the space of a minute: an ordinary dance hall had suddenly turned into a menagerie of quivering buttocks, fiercely swaying hips and explicit simulations of copulation between women, during which one of the girls theatrically took on the male role and pretended to take the other from behind. All the athletic and handsome males had moved to the sides, and leaned on the handrails surrounding the dance floor, while the maidens tried to get their attention with pressing and gradually more obscene dances. On the sidelines of this orgiastic and flamboyant, exquisitely feminine enactment, which was almost innocent by virtue of a serene erotic nonchalance, we stood astonished, a group of white Westerners completely ignored by those present. That sensual spectacle ended as it had begun, without warning or perhaps following a signal we could not pick up on, and the girls went back to dancing in a more traditional way.

A few hours later, returning late at night in the minivan to the hotel, we stopped at an intersection because we heard screaming. Nearby was a woman writhing on the ground, arching her pelvis inhumanly, while a huddle of people had gathered all around. There were those who were trying to hold her down, comforting her and caressing her, but her writhing and screaming did not seem to abate. That frenzied wiggling, with her legs spreading and her chest flexing and curving, had a kind of impudent quality: a loss of inhibitory restraints that made the spectacle not certainly exciting, but rather unseemly.

One of our escorts, an impassive and indecipherable dark-skinned sixty-something man, whom everyone called “Uncle”, rolled down the car window and asked what was going on. He received back a few words in Swahili from one of the onlookers, rolled his window back up, and we set off again in silence as if nothing had happened. Later I asked our interpreter what Uncle and that man had said to each other on the street, and what had happened to the woman we had all seen in convulsive spasms. She was the victim of a spell, he told me, she was possessed by spirits; those people were waiting for the neighborhood shaman who would soon come to “take away” the demons.

That night, back in my room, catching sleep was impossible: the feeling that I had attended not one but two mysteries did not leave me. Somehow, in my mind, I sensed that there was, perfectly clear and undeniable, a connection between the girls seducing the males by feigning intercourse with each other, and the possessed woman uncontrollably screaming in the dust. I could not have said exactly what invisible thread connected the two experiences I had just had, but I knew it was there.

In the years that followed, I reflected on it often. Although the situation of women’s rights in Tanzania has improved over time, the society is still highly patriarchal, and gender discrimination, violence, abuse, and harassment of women is still widespread. What I had witnessed were two episodes in which transgression — namely that of the liberated female body — was instead permitted, as it was well regulated.

The obscene and unbecoming dance called mapouka (which also involved gender reversal, in the assumption of the male role to mimic intercourse) was possible insofar as it was sanctioned by the context: the confines of the discotheque, and the agreed-upon time limits. One thus danced only in that place, and for a specific time frame.

Similarly, the phenomenon of possession — which might at first glance appear to be an event of disruption of the social order — actually has precise cultural norms and functions. As Moreno Paulon writes,

no society seems to be unprepared for possession. If the spiritic onset can disrupt and mark the existence of an individual or a class of individuals, no cultural order is disrupted or comes into crisis when possession manifests itself in one of its members. Human cultures have developed a wide variety of conventions, such as well-established rituals and symbolic interpretations, that accompany and guide the episode. Often an elected group is instructed to categorize and manage the phenomenon: it cures a sick person where possession is considered the symptom of a pathology; it interprets the oracle when the possessed person is a bridge and his word a message from beyond; it exorcises the possessed person if a malevolent spirit is believed to have seized her body. But the idea that possession is necessarily related to “evil” and that it must be responded to by exorcism is only one among many cultural constructions in the world. Within the order of a society, a cult of possession can serve the most varied functions: it can confirm or rediscuss the balance of power between the sexes, consecrate a national identity, legitimize a ruling family, or even express class suffering, consolidate a moral system, direct political decisions, indicate marital alliances.

Here then, in the span of one evening, I had witnessed two moments in which the female body expressed itself at once irregularly and regulatedly. The mapouka and the spirit possession, when considered in relation to a generally oppressed female condition, appear as “authorized rebellions”: escape valves, on the surface, but deep down devices of self-discipline, micro-techniques of control of the system, a bit like Carnival was the inversion of hierarchies approved by the hierarchies themselves.

Unleashed sexuality, free from the constraints of culture, is not permissible. It is the nightmare of any authority. On that torrid African night I attended not one, but two mysteries — which were perhaps the same: a millennial battle between repressive and expressive impulses, a conflict that exploits the language of myth and ecstasy, but takes place always and only on the female body.