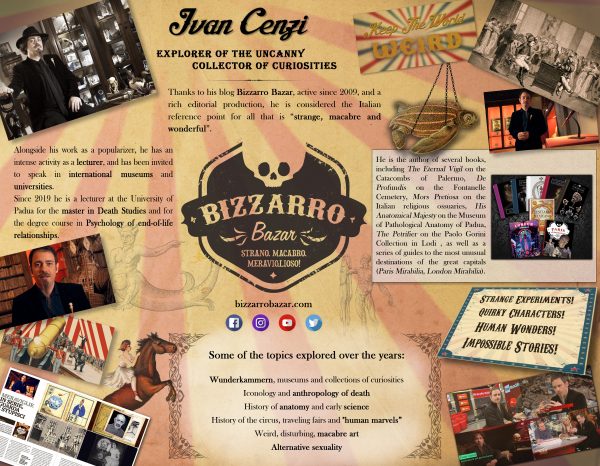 Welcome to my blog!
My name is Ivan Cenzi, I am an explorer of the uncanny and a collector of curiosities.

Launched in 2009, Bizzarro Bazar features today more than 900 articles.
I try to maintain a strict editorial line avoiding typical “TV mysteries” (UFOs, ghosts, and so on), emphasizing the lesser-known history of a humanity who made a virtue and a creative force out of being different and non-aligned.
Since 2014, Bizzarro Bazar has also become a collection of books published by Logos, focusing on Italy’s macabre and hidden wonders, and in 2019 it also became a web series.

To submit suggestions, recommendations, links, collaboration proposals or just to chat a bit, you can contact me by email. 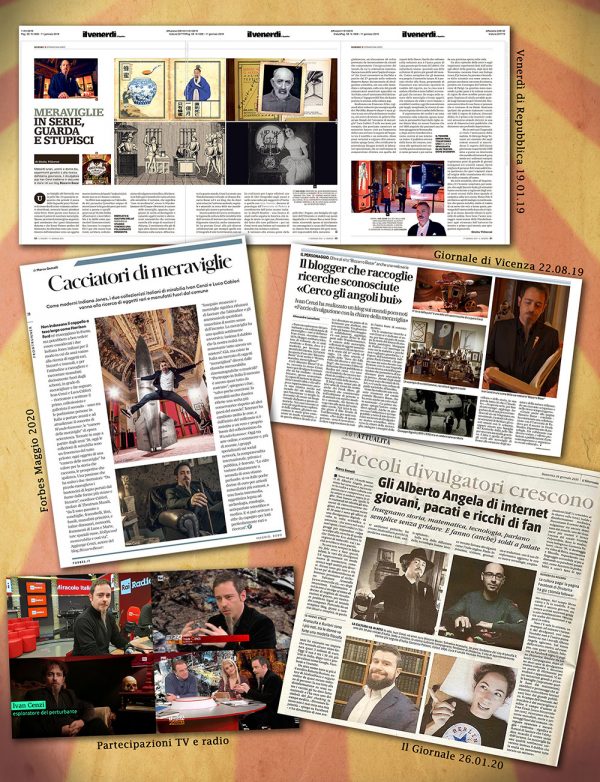 If the casts of the victims of Pompeii make your heart skip a beat, if those mineral snapshots of death satisfy a curiosity you cannot quite understand, there is a place where you could find deep, unnamable satisfactions. It’s a blog, and it has existed since 2009. [Bizzarro Bazar] is a serious, ad-free space where a scholar named Ivan Cenzi delves into the unusual and the uncanny with no concessions to morbidity or to “supermarket wonders junk”. No to UFOs & ghosts. Yes to the anthropology of death, to the history of medicine and pathology, to the macabre in the arts from Rimbaud to Damien Hirst. […] His blog has become the Italian reference point for the marvelous and the macabre. (Venerdì di Repubblica)

As the curator of the virtual wunderkammer Bizzarro Bazar, [Ivan Cenzi] trawls the depths of the human and animal kingdoms to unearth strange, bizarre, and oftentimes macabre stories. […] One could say that Ivan is an evangelist of dark wonder, an intellectual Charles Fort with the intrepidity of Indiana Jones and the morbid wit of Edgar Allan Poe. (The Thinker’s Garden)

Exploring wunderkammern, photography, anthropology and anatomical collections, the blog is intended as a starting point to contemplate the Wonderous, described as something destabilizing, therefore offering a new point of view on things, on the world and on history. (Vice Italy)

With his blog, and with an ever richer publishing activity, Ivan Cenzi has been proving for years that the macabre and the uncanny admit a very sophisticated level of interpretation […]: catching the reader off guard –and swerving to the side – Ivan proves to be fully aware of the risk that his material might be the object of a purely morbid interest, but this does not undermine his dedication to appreciating the most sophisticated implications of the Horrible, the Obscene, the Liminal. His posts are large and densely documented, they take into consideration the historical dimension in order to place each theme in its right context, and they are permeated with an absolutely rare sense of humanity; the readers who associate these topics with drooling, shady characters with a dirty criminal record, will recognize in the style of Bizzarro Bazar the aplomb of an old-time gentleman, capable of descending into the filth and the unspeakable only to resurface with a story of which he then shows, in the clearest and most lucid way, the most intellectually stimulating aspects. (Mariano Tomatis)

139 comments to What Is Bizzarro Bazar?