Giant animals with boundless appetites, small demons, guardian spirits, otherworldly beings, men that turn into birds at night… in his Bestiario mexicano, Claudio Romo introduces us to five “monstruous” creatures from the Mesoamerican folklore: sinsimio, aluxe, nahual, waay pop, and waay chivo.
Each of these “monsters” is presented through several illustrations and described in its appearance, powers, habits, and regional variations.
With their exotic names, such creatures turn out to be totally new to our western, Eurocentric and mainly catholic collective imagination, where a single god created the man in his likeness so that he could rule over nature and become progressively estranged from it.
Things were different in ancient times, as Ivan Cenzi of Bizzarro Bazar points out in the foreword to the book: back then, “there was a strong bond between all the elements of the cosmos, and even if they became increasingly different from each other, they still had a common origin […]. Therefore, reversibility was considered as completely natural”. In the Mesoamerican mythology we find “the same fusion with the animal kingdom that also characterised the Old World in Pagan times”.
After leading us in the discovery of the phantasmagorical garden of Apparitio Albinus and of the Specular Isle, and after an intergalactic odyssey to the end of the universe, in this work Claudio Romo draws from Mesoamerican tradition to reinterpret, in a modern-day retelling, these mythological and folkloric monsters from the Yucatán area, cataloguing them in a sort of Medieval bestiary, and thus creating an intriguing overlap between the Old and the New World.
Between the lines, we can also read a condemnation of the horrors of European colonialism, which imposed its god and its habits to ancient American civilisations, shaking their fascinating, millenary beliefs.

The author:
Claudio Andrés Salvador Francisco Romo Torres (Claudio Romo) is an illustrator and writer born in the port city of Talcahuano, Chile, in 1968. He studied Plastic Arts at the Universidad de Concepción and got a Master degree in Visual Arts with a specialization in Graphic Design at the Academia de San Carlos, Escuela Nacional de Artes Plásticas, UNAM México. He currently teaches graphic design and drawing at the Universidad de Concepción, Chile.
His books for #logosedizioni: A Journey in the Phantasmagorical Garden of Apparitio Albinus (also available in Italian), Nueva Carne, The Book of Imprudent Flora (also available in Italian and Spanish) Tavola smeraldina (also available in Spanish) and Bestiario mexicano. 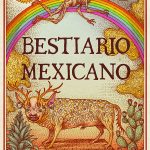 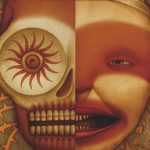 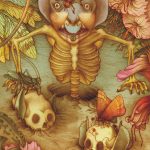 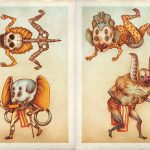 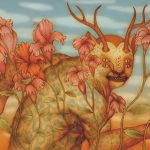 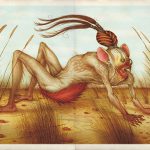 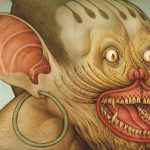 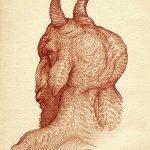 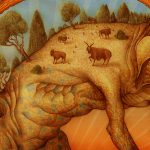 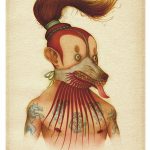 Bestiario Mexicano (for the moment in Italian language only) can be purchased at this link.