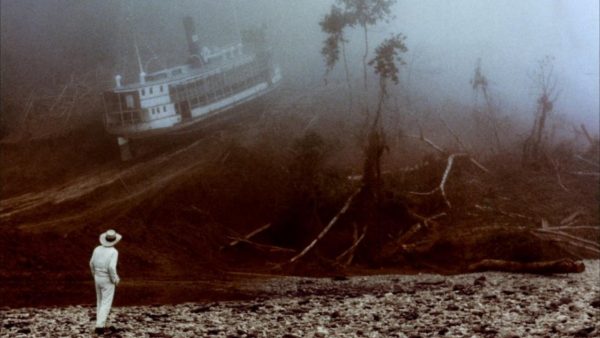 A vision had seized hold of me, like the demented fury of a hound that has sunk its teeth into the leg of a deer carcass and is shaking and tugging at the downed game so frantically that the hunter gives up trying to calm him. It was the vision of a large steamship scaling a hill under its own steam, working its way up a steep slope in the jungle, while above this natural landscape, which shatters the weak and the strong with equal ferocity, soars the voice of Caruso, silencing all the pain and all the voices of the primeval forest and drowning out all birdsong. To be more precise: bird cries, for in this setting, left unfinished and abandoned by God in wrath, the birds do not sing; they shriek in pain, and confused trees tangle with one another like battling Titans, from horizon to horizon, in a steaming creation still being formed.

This was the genesis of Fitzcarraldo, and chasing this dream Herzog actually lifted a steamboat to the top of a mountain, in order to take it from the  Rio Camisea to the Urubamba; a gigantic effort that entailed death and madness, during what is probably the most legendary and extreme film production in history.

The epic of contrast (here: the boat on the mountain, the sophistication of opera against the barbaric jungle) is what always seduced men into attempting the impossible.
And yet, eighty years before Fitzcarraldo, there was a man to whom this very endeavour seemed not at all visionary. A man who, in this idea of a boat climbing up a mountain slope, saw the future. 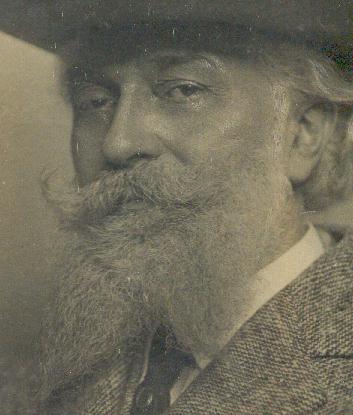 Pietro Caminada (1862-1923), was born from the marriage betweeen Gion Antoni Caminada, a Swiss who had emigrated from the Grisons canton to Italy, and Maria Turconi, from Milan. Fascinated since an early age by the figure of Leonardo Da Vinci, he studied engineering and was forced, like many others at the time, to sail towards Argentina together with his brother Angelo, looking for a job. After stopping for a brief tour of Rio de Janeiro, however, he was stunned by the city. He came back on the ship only to get hold of his luggage, and said to his brother: “I’m staying here“. 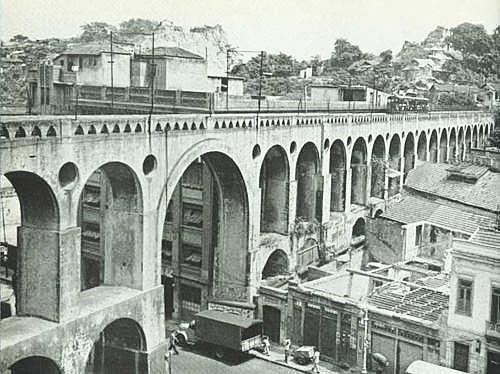 During the fifteen years he spent in Rio, Caminada worked on several projects regarding the town plan, the harbor refurbishing, and transportation: he transformed the Arcos da Lapa Aqueduct, built in 1750, into a viaduct for the transit of the Bonde, the folkloristic yellow tram which caracterized the Brazilian city until 2011. He was even chosen to design from scratch the new capital, Brasilia, sixty years before the town was actually built.
After this brilliant start, Caminada relocated back to Italy, in Rome. In addition to a wife and three daughters, he also brought with him his most ambitious project: making the Alps navigable. 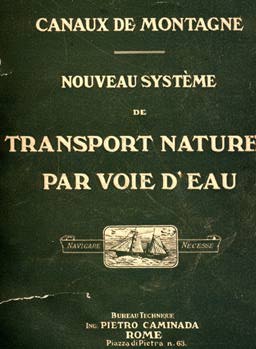 Certainly this idea had a foremost practical purpose. Connecting Genoa to Konstanz via the Splügen Pass would have allowed for an otherwise unthinkable commercial development, as waterways were affordable and inexpensive.
But in Caminada’s proposal there also was an element of challenge, as if he was defying Nature itself; a fact the papers at the time never ceased to stress. An article, which appeared on the magazine Ars et Labor (1906-1912), began like this:

Man always seems to turn his creativity against the firmest and most solid laws of Nature. He is like a rebellious kid who fancies especially what is forbidden.
— Ah, you did not give me wings, he says to Nature, well I will build me some and fly anyway, in spite of your plans! You made my legs weak and slow, well I will build me an iron horse and run faster than your fastest creatures […]. As wonderful as a moving train might be, it does not upset any of the fundamental principles of Nature’s system; but to sail through the mountains, to sail upwards, to sail across steep slopes expecting this miracle to come only from the energy of channeled water, that is something that turns our most certain knowledge of navigation upside down, something contrary to water’s immutable ways of being […]. 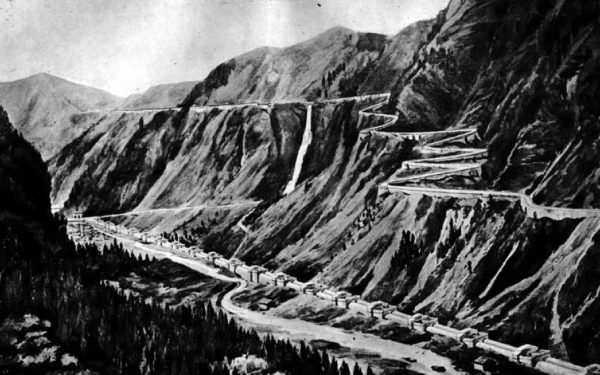 The beauty of Caminada’s method to bring boats across the Alps resided in its simplicity. It mainly consisted of a variation of the widely used ship-lock system.
If building a lock “stairway” on different levels remained unthinkable, according to the engineer everything would be easier with an inclined plane:

Imagine holding a cylindrical tube filled with water in a vertical position, the water plane will be round: if the pipe is tilted, the water plane, while always horizontal, will acquire a shape which will be the more elliptical and elongated the more the tube gets close to the horizontal position. If water is let out of the pipe, any floating body on the water plane will come down with it, along a diagonal […]. Thus, if the tube is held vertical the floating body will go up or down following a vertical line: if inclined, the floating body in addition to moving up or down will also travel horizontally. On this simple idea of tubular locks I have built my system of inclined canals, with two lanes in opposite directions. 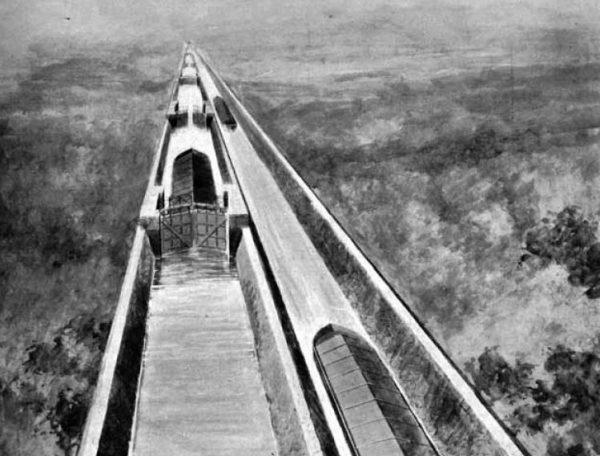 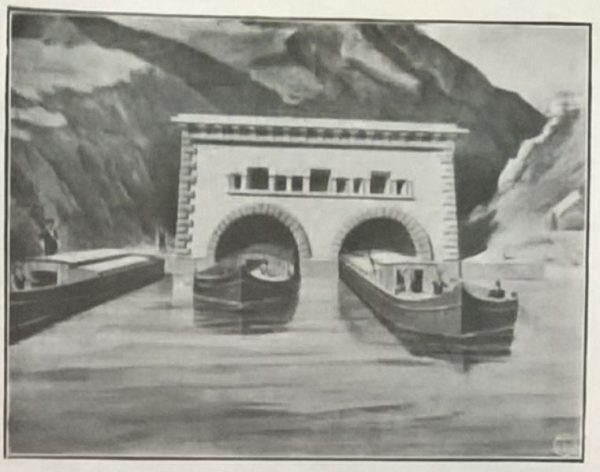 One lock is full, the other empty. In the full lock is placed the descending ship; in the empty one, the other boat that has to climb up. The two locks communicate at the bottom through channels or syphons. Upon opening the syphon, the water moves from the full lock to the empty one, lowering and carrying downards the boat in the full lock while lifting up the one in the empty lock, until they reach the same level […]. The operation is completed by closing the communication duct and completely emptying the lock with the descending ship, while from the upstream basin comes the necessary water to fill the lock where the upgoing boat is. 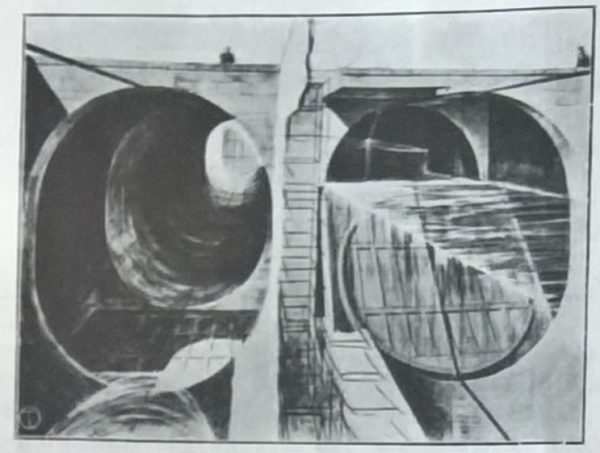 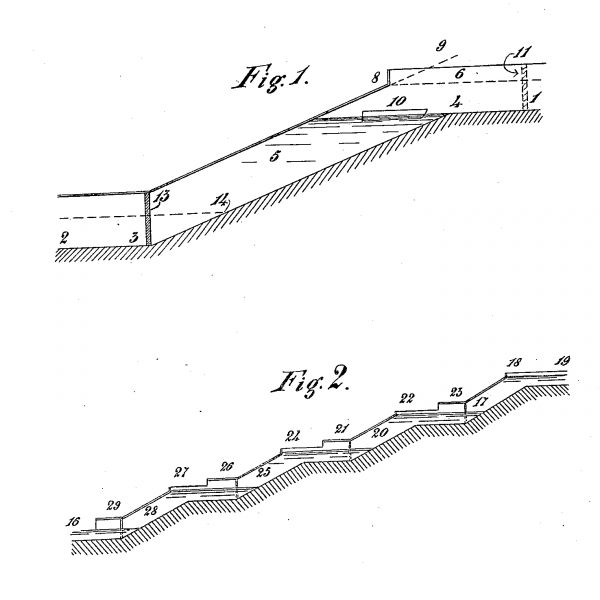 This system, patented by Caminada around the world since 1907, had a huge resonance in those years. It was discussed in articles published by international papers, in conventions and meetings, so much so that many thought the project would become real over a very short time.
Cesare Bolla, who lived in Ticino and disapproved deeply of Caminada’s ideas, even wrote a tongue-in-cheek little poem in 1908, making fun of the inevitable, epochal trasformation that was about to hit Lugano:

Outside my tavern, I’ve put on display
A sign on the window, saying: “Seaside Hotel”.
Folks round here, by a sacred fire consumed,
Only by ships and sails are amused.
[…] it won’t be long, for our own sake,
we’ll gaze at the sea instead of this lake.
Ships will pass in great abundance
All headed for the lake of Constance. 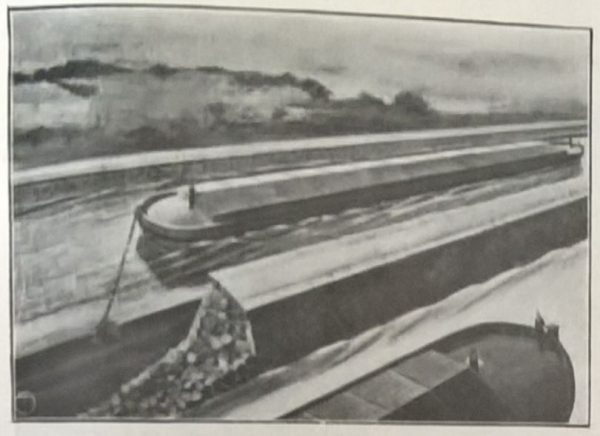 The engineer never stopped working on his dream.

«Caminada — as Till Hein notes — struggled for his vision. He went over and over the details of his project, he built miniatures of his lock system, in many variations. And eventually he built a gigantic model, for the great Architecture Exposition in Milan. With unflinching zeal he tried to convince politicians and officials». He was, like the Bündner Tagblatt once wrote, «an erupting volcano» and had «a restless head, with hair down to his shoulders» […].

But the Genoa-Kostanz route imagined by Caminada was bound to collide, on one hand, with the interests of a Swiss “railroad lobby” who endorsed the building of a train line through the Splügen Pass; on the other, there was Austria, which dominated northeastern Italy and was determined to see that the Kingdom of Savoy couldn’t set a direct connection with Germany, be it by train or ship. 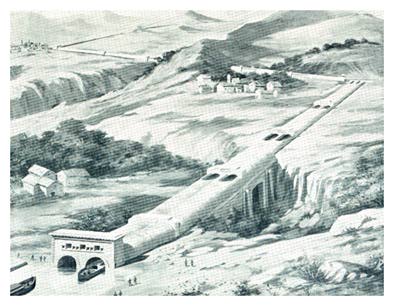 In 1923, at the age of sixty, Caminada died in Rome, and his waterways never became a reality.
His project, which only fifteen years before was seen as the upcoming future, ended up like its inventor in the “mass grave” of memories — except for some sporadic exhibition, and a little country road still bearing his name, situated in the vicinity of the airport entitled to his beloved Leonardo Da Vinci.

Looking back today, the most unfortunate and even sarcastic detail of the story might be a prophecy uttered by King Victor Emmanuel III: when Caminada showed him his plans during a private hearing on January 3, 1908, the King replied: “One day I will be long forgotten, but people will still be talking about you“. 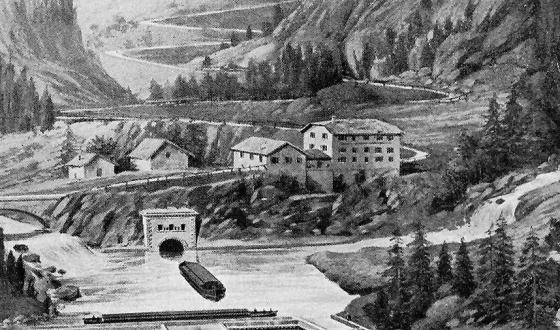 Caminada’s motto, which he repeated throughout his life, is however still true. In two simple Latin words, it encompasses every yearning, every tension towards human limits, every courageous desire of exploring the boundaries: Navigare necesse. It is essential to navigate.

For human beings, setting sail towards new horizons still is, and always will be, a necessity and an imperative. 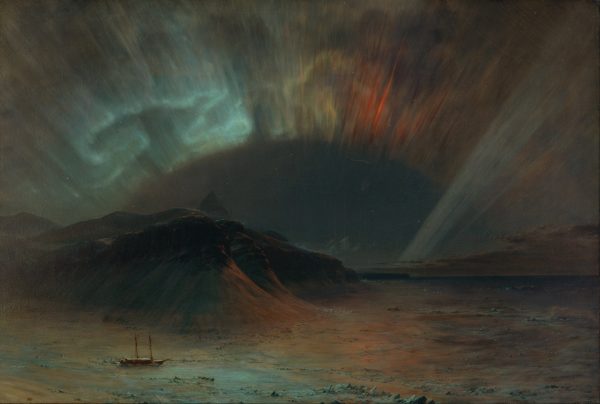