This article originally appeared on The LondoNerD, an Italian blog on the secrets of London. 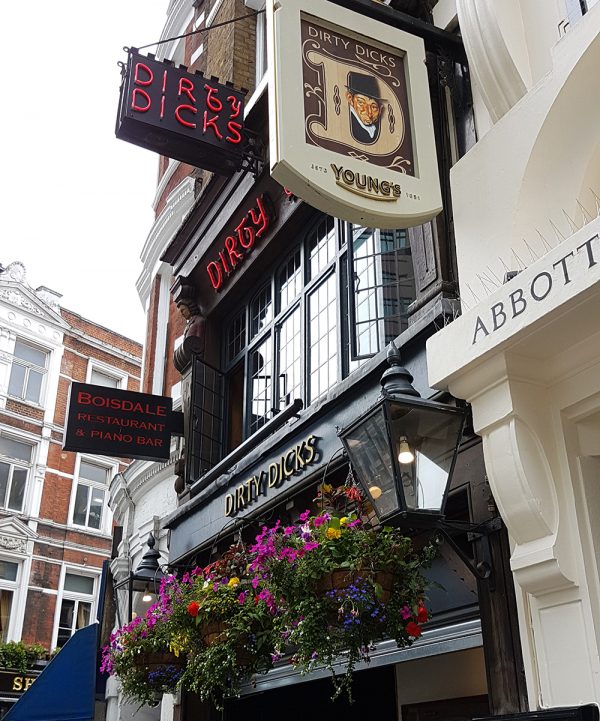 I have about an hour to complete my mission.
Just out of Liverpool Street Station, I look around waiting for my eyes to adapt to the glaring street. The light is harsh, quite oddly indeed as those London clouds rest on the Victorian buildings like oilcloth. Or like a shroud, I find myself thinking — a natural free association, since I stand a few steps away from those areas (the 19th-Century slums of Whitchapel and Spitafield) where the Ripper was active.
But my mission has nothing to do with old Jack.
The job was assigned to me by The LondoNerD himself: knowing I would have a little spare time before my connection, he wrote me a laconic note:

“You should head straight for Dirty Dicks. And go down in the toilets.“

Now: having The LondoNerD as a friend is always a sure bet, when you’re in the City. He knows more about London than most of actual Londoners, and his advice is always valuable.
And yet I have to admit that visiting a loo, especially in a place called Dirty Dicks, is not a prospect which makes me sparkle with enthusiasm.

But then again, this proposal must conceal something that has to do with my interests. Likely, some macabre secret.
For those who don’t know me, that’s what I do for a living: I deal with bizarre and macabre stuff. My (very unserious) business card reads: Explorer of the Uncanny, Collector of Wonders. 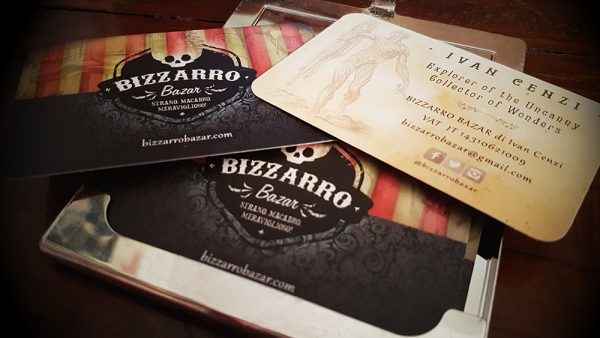 The collection the card refers to is of course made of physical obejects, coming from ancient times and esotic latitudes, which I cram inside my cabinets; but it’s also a metaphore for the strange forgotten stories I have been collecting and retelling for many years — historical adecdotes proving how the world never really ceased to be an enchanted place, overflowing with wonders.

But enough, time is running out.

Taking long strides I move towards Dirty Dicks, at 202 Bishopsgate. And it’s not much of a surprise to find that, given the name on the signs, the pub’s facade is one of the most photographed by tourists, amidst chuckles and faux-Puritan winks. 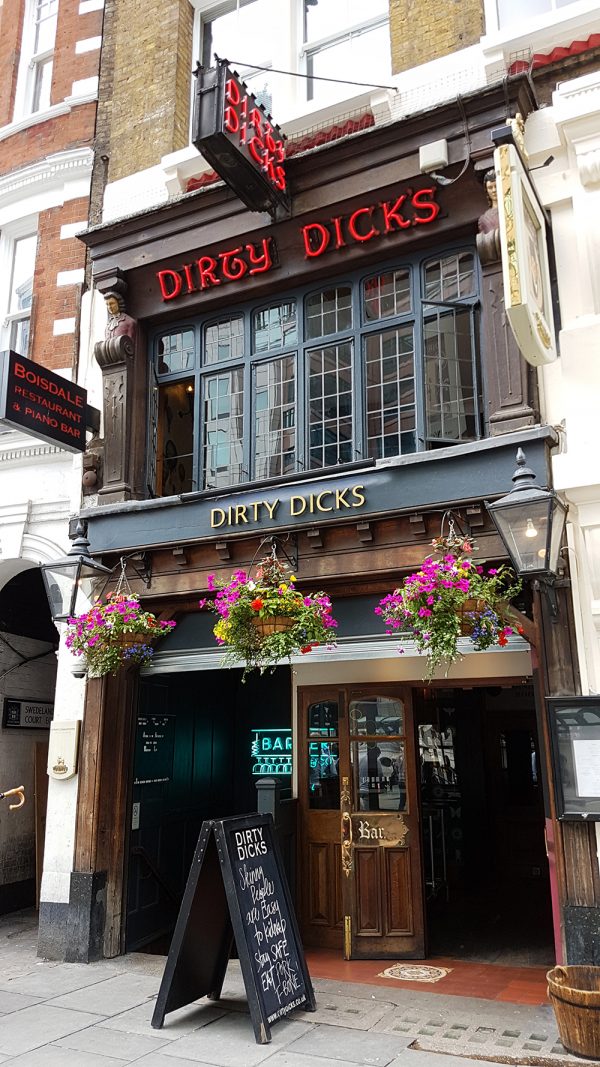 The blackboard by the door remarks upon a too often ignored truth: 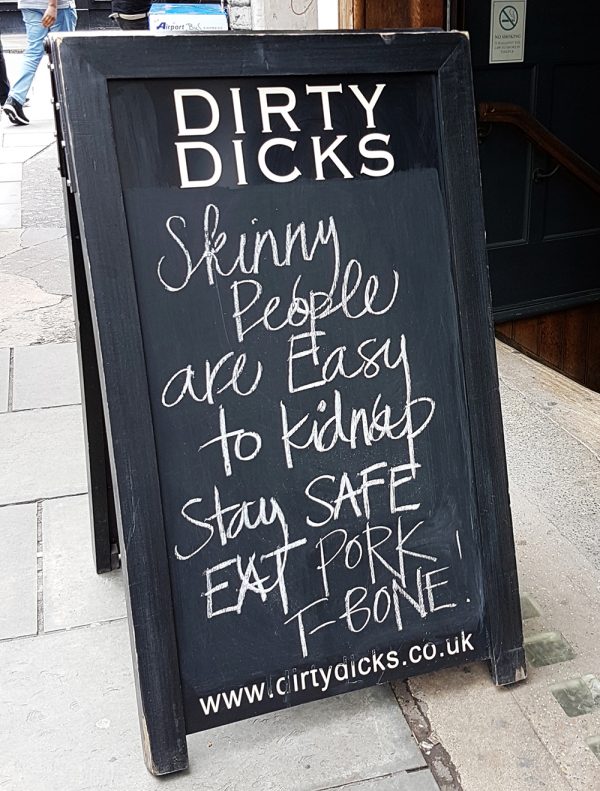 I am not at all paranoid (I couldn’t be, since I spend my time dealing with mummies, crypts and anatomical museums), but I reckon the advice is worth following. 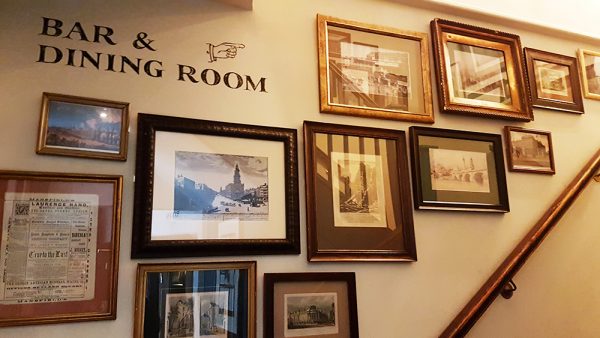 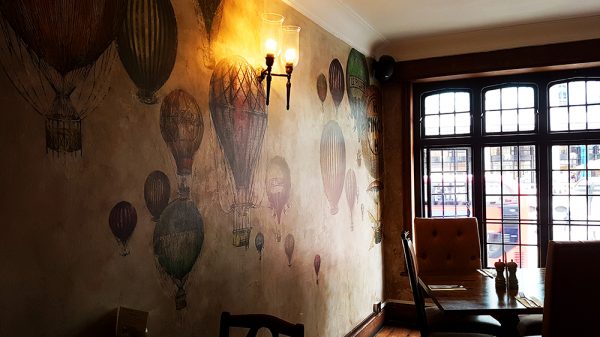 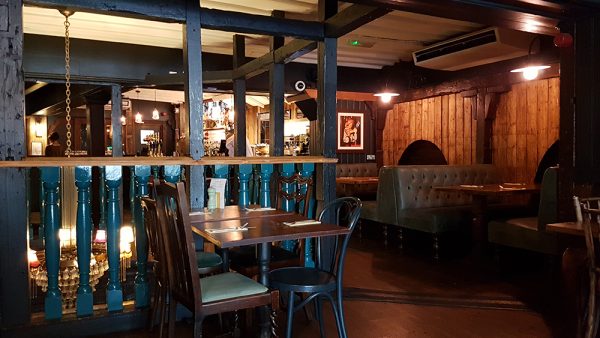 I quickly order my food, and head towards the famous restrooms. 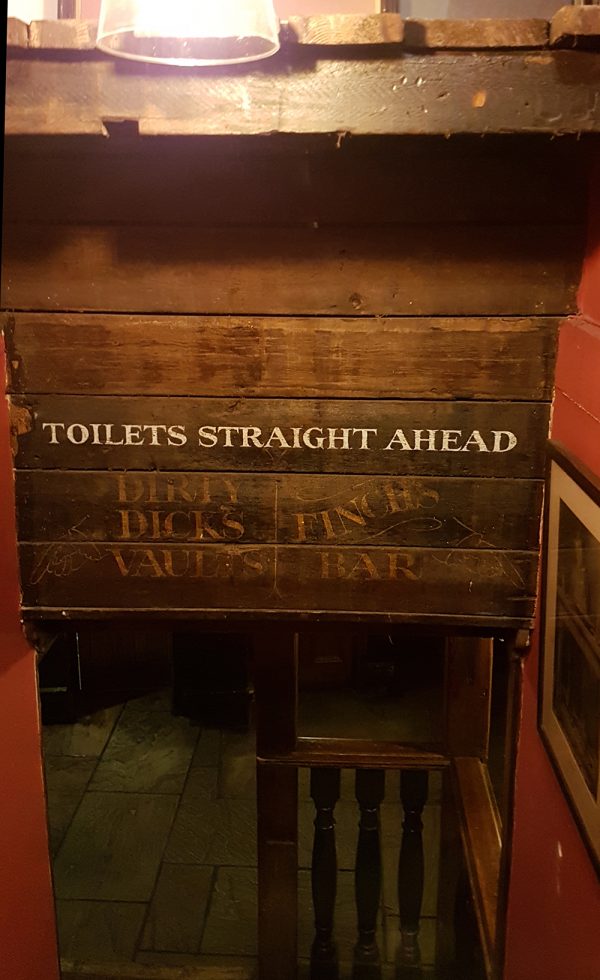 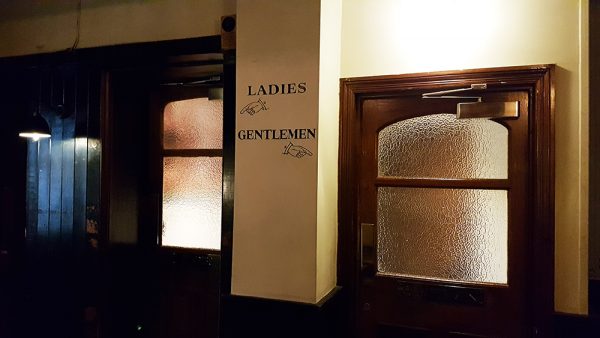 The toilets’ waiting room is glowing with a dim yellow light, but finally, there in the corner, I recognize the objective of my mission. The reason I was sent here.

A two-door cabinet, plunged in semi-obscurity, is decorated with a sign: “Nathaniel Bentley’s Artefacts”. 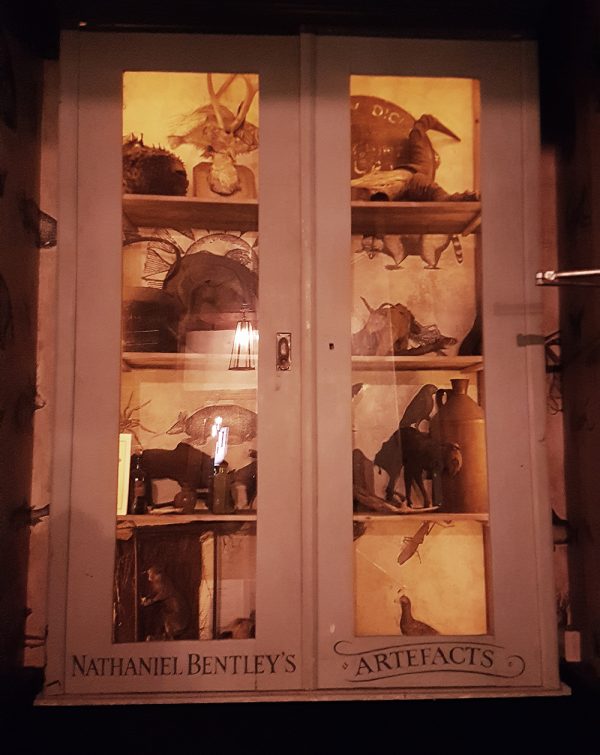 It is so dark in here that I can barely identify what’s inside the cabinet. (I try and take some pictures, but the sensor, pushed to the limit of its capabilities, only gives back blurred images — for which I apologize with the reader.)

Yes, I can make out a mummified cat. And there’s another one. They remind me of the dead cat and mouse found behind Christ Church‘s organ in Dublin, and displayed in that very church. 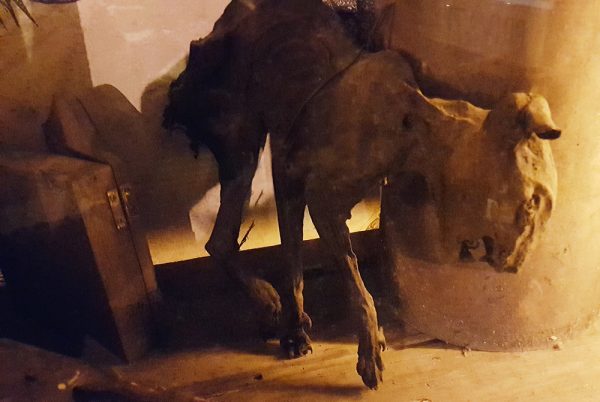 No mice here, as far as I can tell, but there’s a spooky withered squirrel watching me with its bulging little eyes. 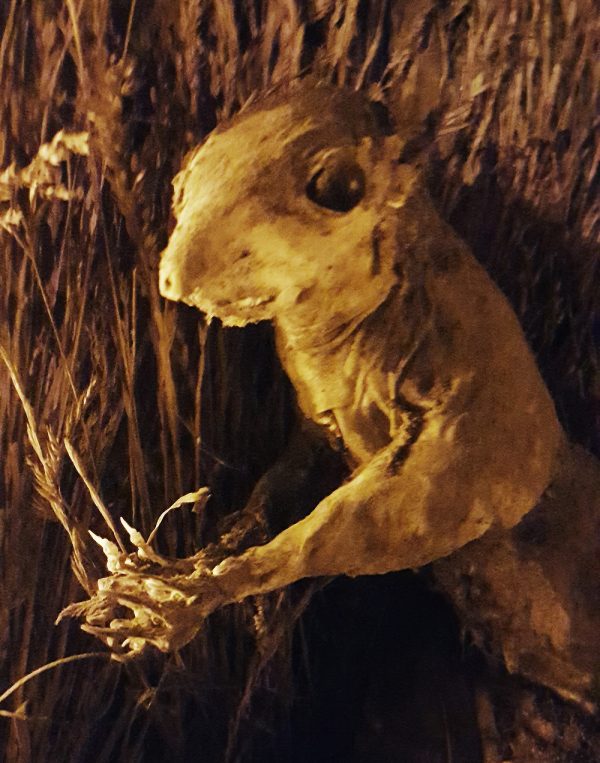 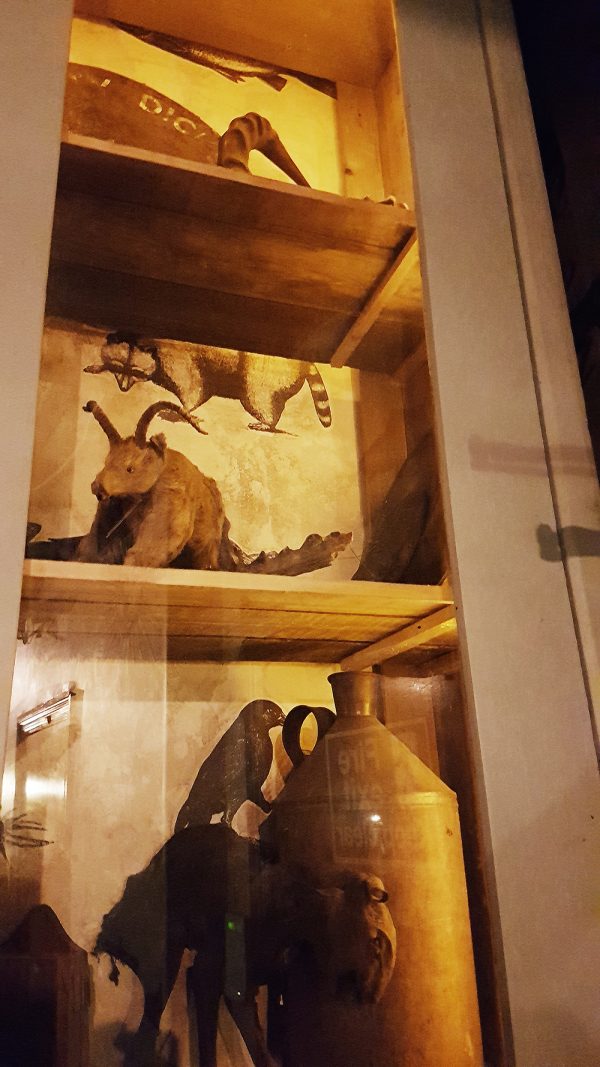 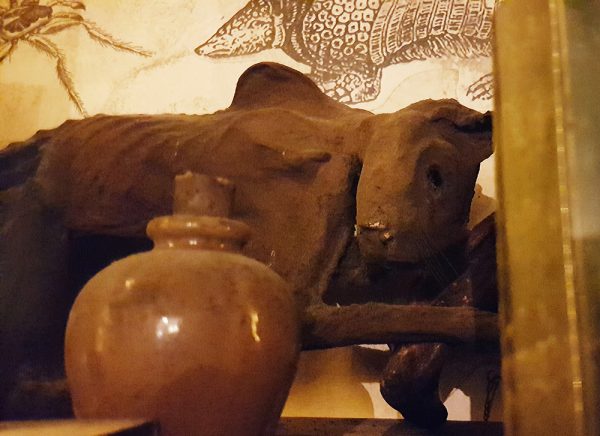 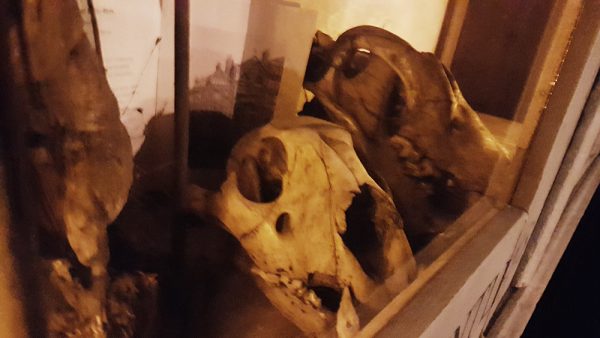 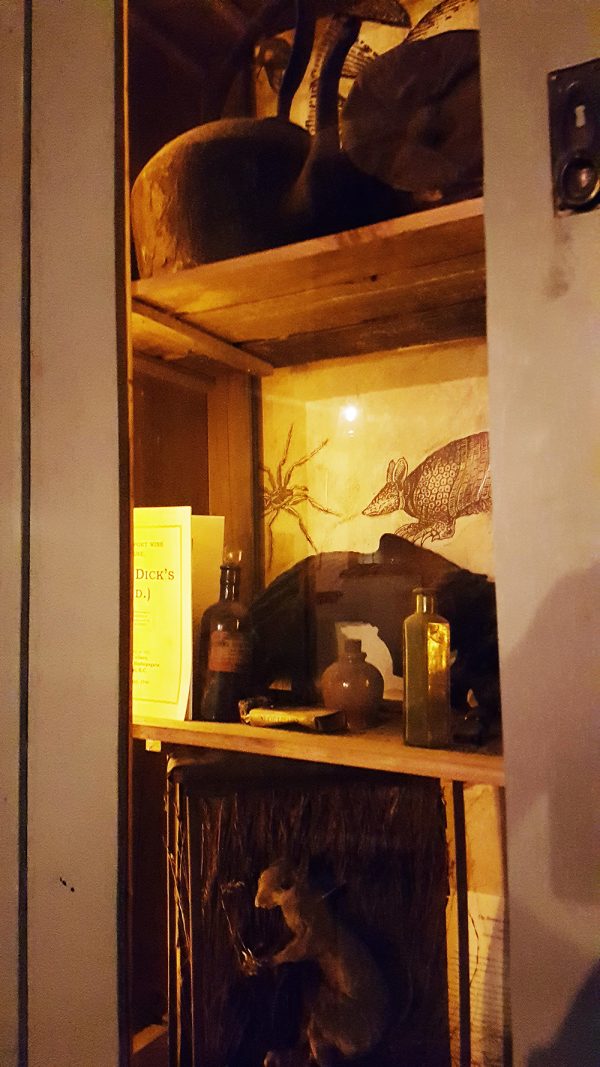 What is this dusty and moldy cabinet of curiosities doing inside a pub? Who is Nathaniel Bentley, whom the sign indicates as the creator of the “artefacts”?

The story of this bizarre collection is strictly tied to the bar’s origins, and its infamous name.
Dirty Dicks has in fact lost (in a humorous yet excellent marketing choice) its ancient genitive apostrophe, referring to a real-life character.
Dirty Dick was the nickname of our mysterious Nathaniel Bentley. 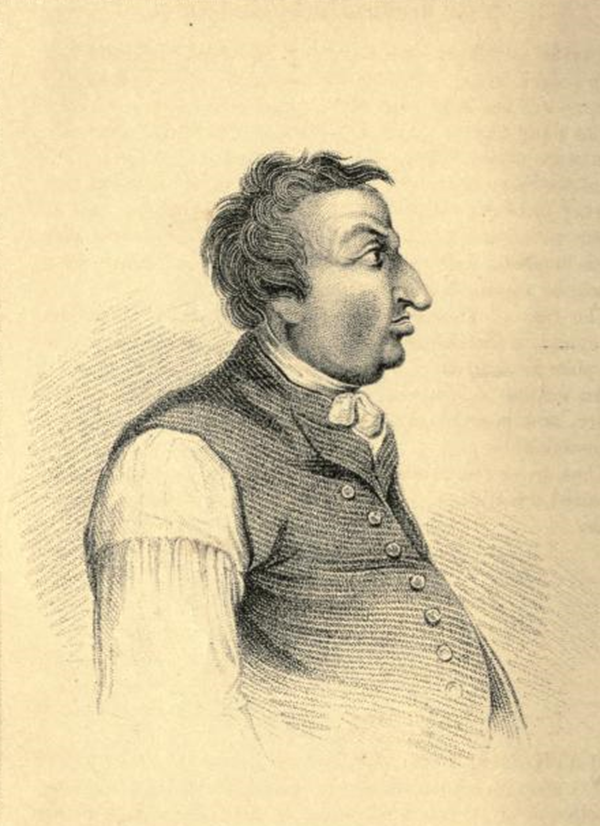 Bentley, who lived in the 18th Century, was the original owner of the pub and also ran a hardware store and a warehouse adjacent to the inn. After a carefree dandy youth, he decided to marry. But, in the most dramatic twist of fate, his bride died on their wedding day.

From that moment on Nathaniel, plunged into the abyss of a desperate grief, gave up washing himself or cleaning his tavern. He became so famous for his grubbiness that he was nicknamed Dirty Dick — and knowing the degree of hygiene in London at the time, the filth on his person and in his pub must have been really unimaginable.
Letters sent to his store were simply addressed to “The Dirty Warehouse”. It seems that even Charles Dickens, in his Great Expectations, might have taken inspiration from Dirty Dick for the character of Miss Havisham, the bride left at the altar who refuses to take off her wedding dress for the rest of her life.

In 1804 Nathaniel closed all of his commercial activities, and left London. After his death in 1809 in Haddington, Lincolnshire, other owners took over the pub, and decided to capitalize on the famous urban legend. They recreated the look of the old squallid warehouse, keeping their bottles of liquor constantly covered in dust and cobwebs, and leaving around the bar (as a nice decor) those worn-out stuffed and mummified animals Dirty Dick never cared to throw in the trash.

Today that Dirty Dicks is all clean and tidy, and the only smell is of good cuisine, the relics have been moved to this cabinet near the toilets. As a reminder of one of the countless, eccentric and often tragic stories that punctuate the history of London. 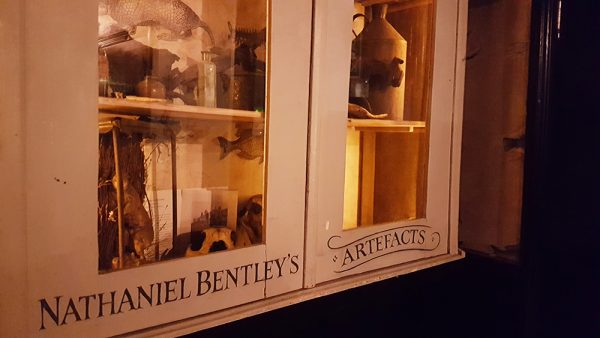 Funny how times change. Once the specialty of the house was filth, now it’s the inviting and delicious pork T-bone that awaits me when I get back to my table.

And that I willingly tackle, just to ward off potential kidnappers. 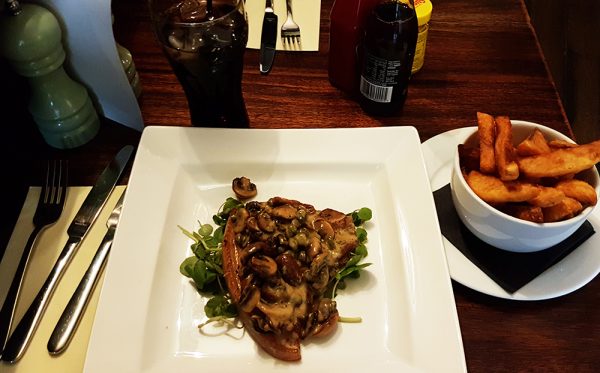 The LondoNerD is an Italian blog, young but already full of wonderful insights: weird, curious and little-knowns stories about London. You can follow on Facebook and Twitter.