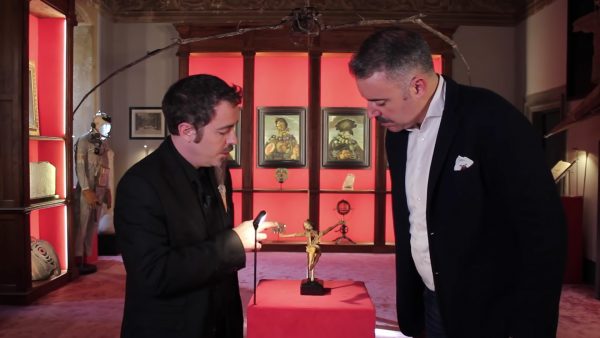 In episode 8 of the Bizzarro Bazar web series, I showed a very special piece from my curio collection: a 17th-century wax crucifix, whose abdomen is equipped with a small door revealing the internal organs of Jesus.
In presenting it I used the most widespread definition for this kind of artifacts, namely that of “anatomical Christ”. I briefly summarized its function by saying that the allegorical intent was to demonstrate the humanity of the Redeemer right down to his bowels. 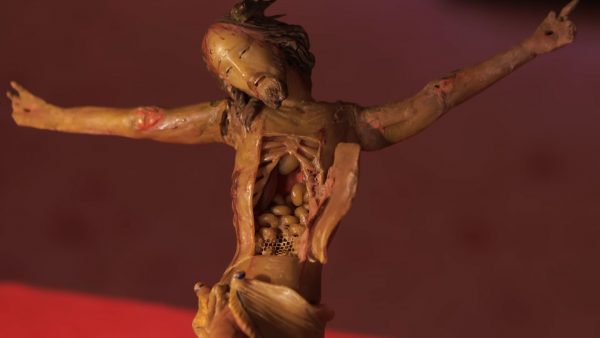 Some time before recording that episode, however, I had been contacted by art historian Teodoro De Giorgio, who was conducting the first accurate census of all existing crucifixes of this kind. During our meeting he had examined my ceroplastic specimen, kindly promising to let me know when his study was published.

His research finally appeared in August on the Mitteilungen des Kunsthistorischen Institutes in Florenz, one of the oldest and most prestigious journals of international art history. The essay’s translated title reads: “The Origins of the Iconography in Visceribus Christi. From medieval influences of cordial devotion to the modern representation of the bowels of Christ“. 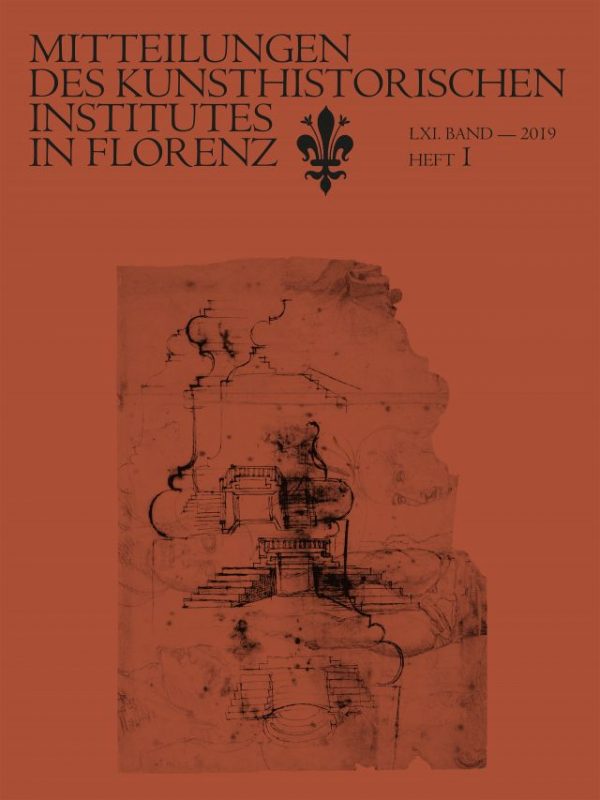 And here is the surprise: the fascinating analysis that Prof. De Giorgio has conducted refuses both the denomination of “anatomical Christ” and the function of the object as I exposed it, based on the few existing studies.
Instead, his essay reveals how these wax crucifixes were invested with a much deeper symbolic and theological value, which I wish to summarize here. (Note: although the paper is accompanied by a generous photographic apparatus, out of respect for the owners’ image rights I will only include in this article photos of my crucifix.) 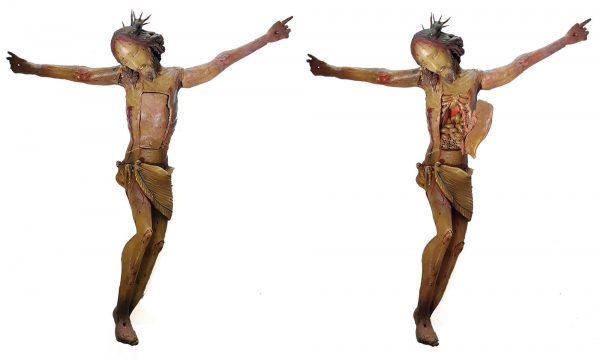 De Giorgio’s study includes and minutely describes the few existing crucifixes we know of: nineteen specimens in all, produced between the 17th and 19th centuries in southern Italy, most likely in Sicilian wax-making workshops.

To understand the complex stratification of meaning that links the image of Christ with his bowels exposed to the concept of divine mercy, the author first examines the biblical anthology. Here we discover that

in the Holy Scriptures the bowels are a powerful verbal image with a double meaning: figurative and real. The same term, depending on the context and the dialogic referent, can qualify both divine infinity and human finiteness. […] in the Septuagint, which is largely faithful to the original Hebrew text of the Old Testament, there is a substantial semantic homology between the Greek terms σπλάγχνα (viscera), καρδία (heart) and κοιλία (belly). At the core of this equivalence lies the biblical conception of mercy: “to feel mercy” is to be compassionate “down to one’s bowels” […] In Semitic languages, particularly in Hebrew, Aramaic and Arabic, divine mercy shows not only a visceral significance, but also — and above all — a uterine value. 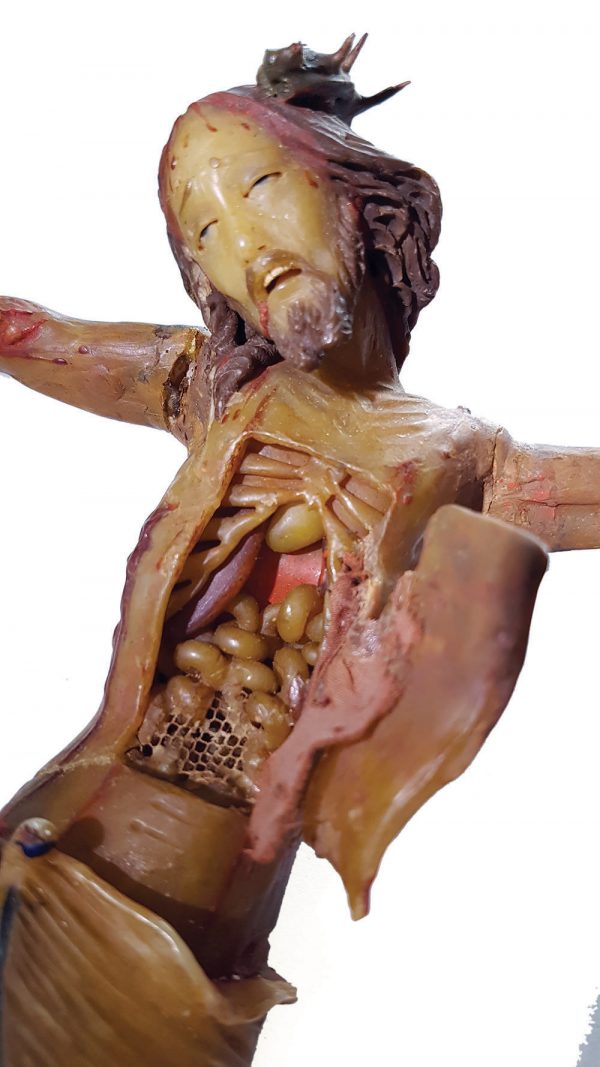 Through various examples from the Old and New Testament, De Giorgio shows this “visceral” mercy was thought to be a prerogative of both God and Christ, and how the womb was identified from time to time as a seat of divine compassion or as a metaphorical uterus representing God’s maternal care towards Israel. The heart and bowels – of God, of Christ – were therefore intended as a fountain of mercy quenching the believer’s thirst, a divine spring of love.

In the Middle Ages this concept took the form of a devotion to the Sacred Heart of Jesus, which began to spread thanks to the celestial visions of some female mystics such as Saint Lutgardis, Mechthild of Magdeburg, Gertrude of Hackeborn, Mechthilde of Helfta and Gertrude the Great.

In the tradition of the Latin Church an expression marks the mercy of Christ: in visceribus Christi [“in the viscera of Christ”]. With this Latin formula, […] the Christian implored Jesus Christ in order to obtain graces through his divine mercy. Praying in visceribus Christi meant weaving a privileged spiritual relationship with the Savior in the hope of moving his bowels of mercy, which he had fully manifested on the cross. 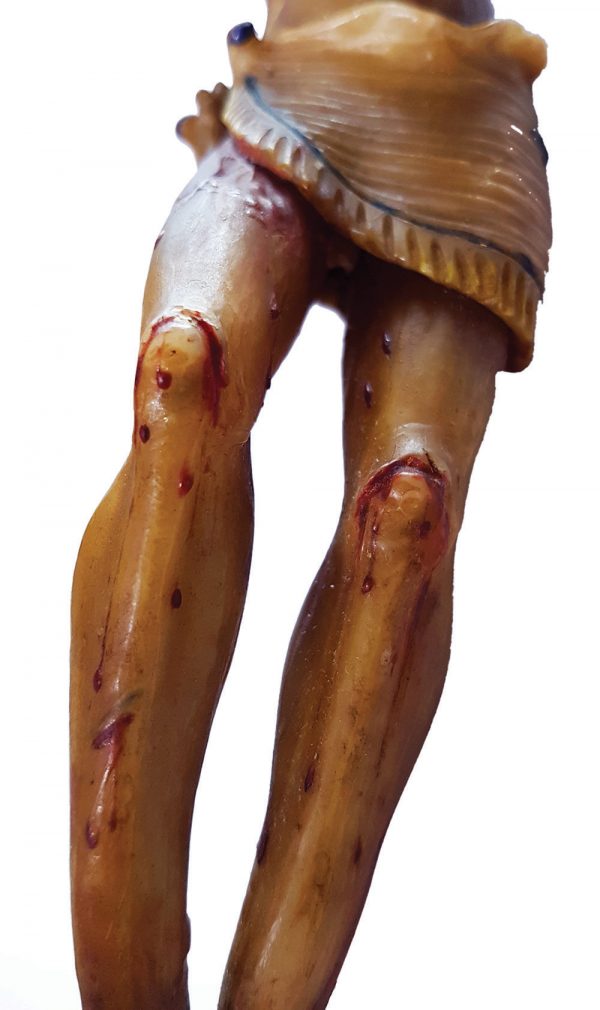 The Jesuits were among the first congregations to join the new cult, and the practice of directing the prayers to the Sacred Heart and to the bowels of Christ, and the author attibutes these particular wax crucifixes with abdominal flaps to the Society of Jesus. It was precisely in the 16th-17th century that the need to identify an adequate iconography for worship became urgent.

If the mercy of God revealed itself in all its magnificence in the figure of Jesus of Nazareth, who — as attested by the Gospels — harbored ‘visceral compassion’ towards humanity, there were very specific reasons for contemplating the Savior’s innards and in the 17th century, along with the growing freedom of representations of the Sacred Heart and a parallel progress in anatomical and physiological knowledge, the time was ripe to do so by making use of a specific iconography. Yet the task did not go without dangers:

In European spiritual circles, especially those related to confraternity associations, other images had to circulate unofficially and be reserved for personal devotion or that of small groups of followers […]. The iconography in question must have seen the light in this climate of emotional and passionate popular fervor, which manifested itslef in many pious practices, and at the same time one of rational dissent of a part of the high ecclesiastical hierarchy, which saw in the adoration of the fleshy heart of Christ the seeds of the Arian heresy. 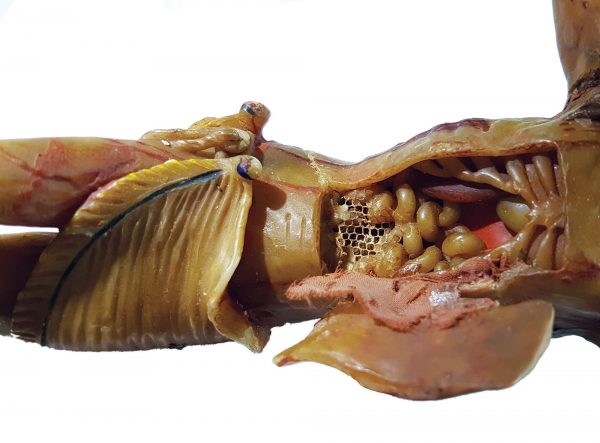 Far from being mere anatomical representations aimed at showing the Savior’s human suffering, the crucifixes had instead a much more important function, namely

to invite devotees, in the so-called ‘strong times’ (such as the Lenten season or during Holy Week, and in particular in the Easter Triduum or, even more, on Good Friday) or in times of need, to contemplate the bowels of mercy of the Savior by opening the appropriate door. Right there to His bowels prayers and supplications had to be addressed, right there the rite of the faithful kiss had to be carried out, and right there patches and cotton wool had to be placed, according to the customs of the time, to be kept as real contact relics. The iconography in question, which we can call in visceribus Christi, could only be formulated in the precise devotional context of the Jesuit society, linked to the sphere of brotherhoods. That was the appropriate place in which the veneration of the sacred bowels of Christ could be carried out, as such an explicit vision could cause the indignation of many, including ecclesiastics who were less theologically knowledgeable than the Jesuits or who were, more simply, weak-stomached. The choice of a small format, on the other hand, is understandable precisely because of the limited devotional scope of these waxworks, which were reserved for small groups of people or for private worship.

De Giorgio states that these crucifixes were not simply an “Ecce homo anatomicus“, but rather an instrument for directing prayers to the very source of divine mercy.

I for my part can add that they appeared in a period, the Renaissance, in which iconography was often aimed at reviving the mystery of the incarnation and the humanity of Jesus by means of a dramtic realism, for example in the so-called ostentatio genitalium, the representation of the genitals of Christ (as a child or on the cross). Showing the sacrificed body of Christ in all its fragile nudity had the purpose of favoring the believers’ identification and imitatio of Christ, as devotees were invited to “nakedly follow the naked Christ“. And what nakedness can be more extreme than the anatomical disclosure?
On the other hand, as Leo Steinberg showed in his classic essay on the sexuality of Christ, this was also a way for artsits to find a theological foundation and justification for the figurative realism advocated by the Renaissance.

Thus, thanks to De Giorgio’s contribution, we discover that wax crucifixes in visceribus Christi hid a very dense symbolic meaning. Sacred accessories of a cult suspected of heresy and not yet endorsed by the hierarchies of the Church (the adoration of the Sacred Heart will be officially allowed only in 1765), these were secret objects of devotion and contemplation.
And they remain a particularly touching testimony of the perhaps desperate attempt to move to compassion — down to the “bowels” — that God who too often seems willing to abandon man to his own destiny. 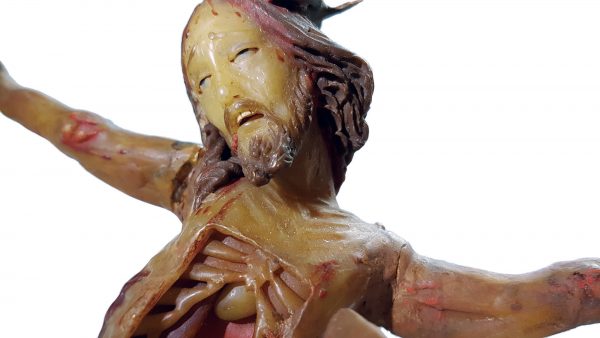