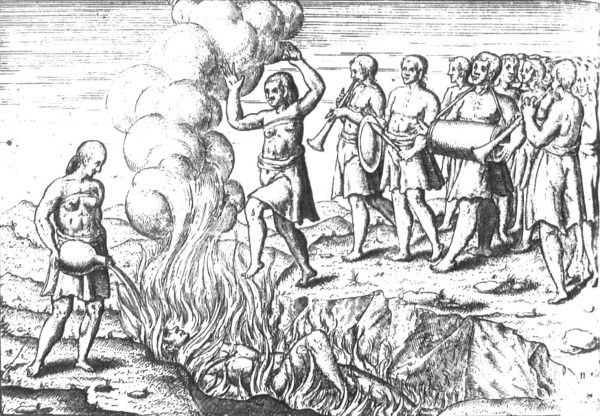 Some of you probably know about sati (or suttee), the hindu self-immolation ritual according to which a widow was expected to climb on her husband’s funeral pire to be burned alive, along his body. Officially forbidden by the English in 1829, the practice declined over time – not without some opposition on behalf of traditionalists – until it almost entirely disappeared: if in the XIX Century around 600 sati took place every year, from 1943 to 1987 the registered cases were around 30, and only 4 in the new millennium. 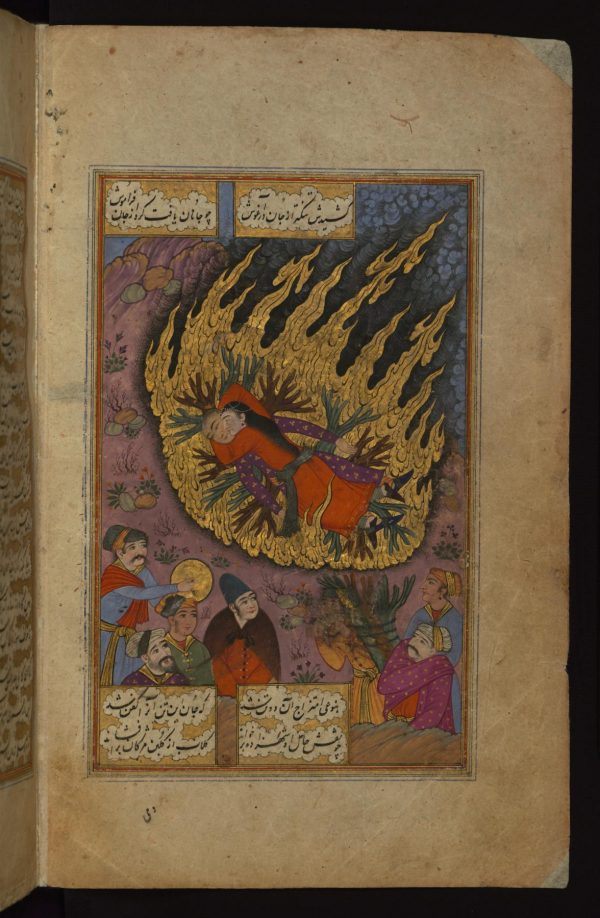 The sacrifice of widows was not limited to India, in fact it appeared in several cultures. In his Histories, Herodotus wrote about a people living “above the Krestons”, in Thracia: within this community, the favorite among the widows of a great man was killed over his grave and buried with him, while the other wives considered it a disgrace to keep on living.

Among the Heruli in III Century a.D., it was common for widows to hang themselves over their husband’s burial ground; in the XVIII Century, on the other side of the ocean, when a Natchez chief died his wives (often accompanied by other volunteers) followed him by committing ritual suicide. At times, some mothers from the tribe would even sacrify their own newborn children, in an act of love so strong that women who performed it were treated with great honor and entered a higher social level. Similar funeral practices existed in other native peoples along the southern part of Mississippi River.

Also in the Pacific area, for instance in Fiji, there were traditions involving the strangling of the village chief’s widows. Usually the suffocation was carried out or supervised by the widow’s brother (see Fison’s Notes on Fijian Burial Customs, 1881).

The idea underlying these practices was that it was deemed unconcievable (or improper) for a woman to remain alive after her husband’s death. In more general terms, a leader’s death opened an unbridgeable void, so much so that the survivors’ social existence was erased.
If female self-immolation (and, less commonly, male self-immolation) can be found in various time periods and latitudes, the Dani tribe developed a one-of-a-kind funeral sacrifice. 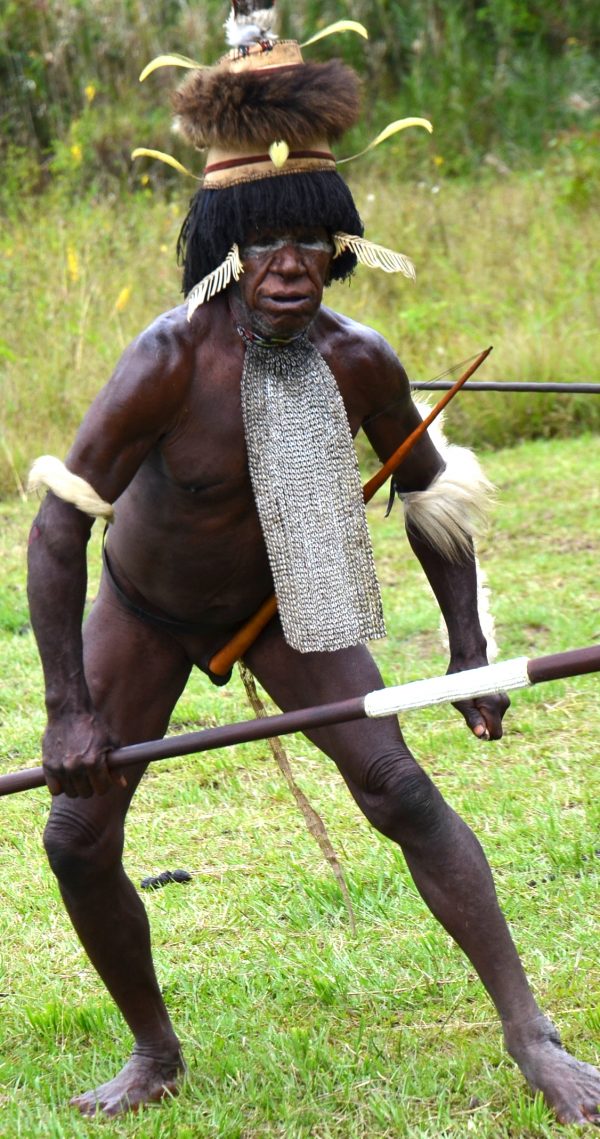 The Dani people live mainly in Baliem Valley, the indonesian side of New Guinea‘s central highlands. They are now a well-known tribe, on the account of increased tourism in the area; the warriors dress with symbolic accessories – a feather headgear, fur bands, a sort of tie made of seashells specifying the rank of the man wearing it, a pig’s fangs fixed to the nostrils and the koteka, a penis sheath made from a dried-out gourd.
The women’s clothing is simpler, consisting in a skirt made from bark and grass, and a headgear made from multicolored bird feathers. 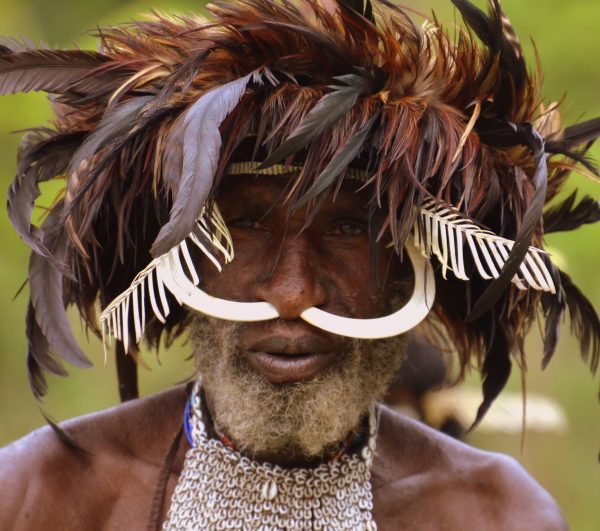 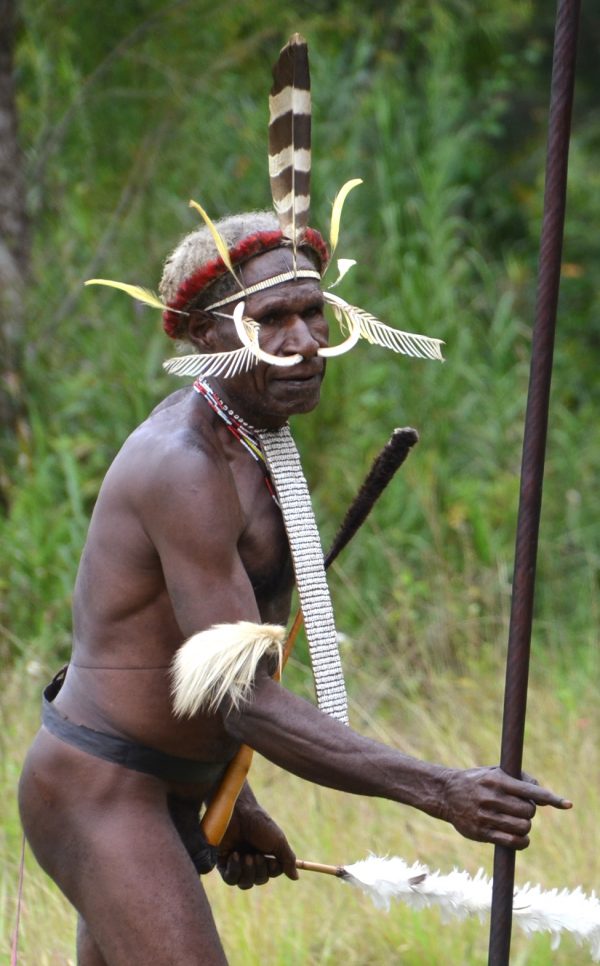 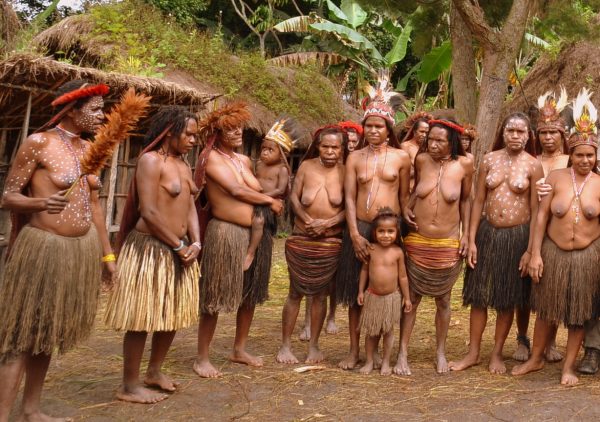 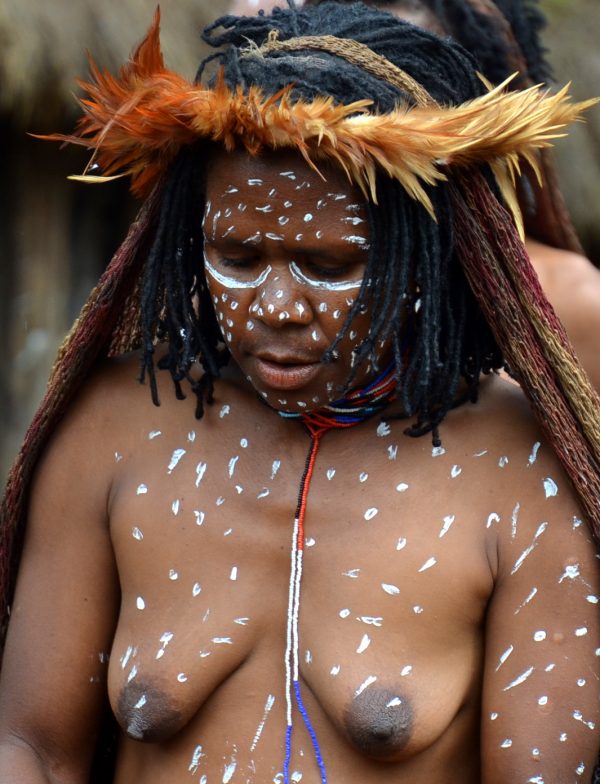 Among this people, according to tradition when a man died the women who were close or related to him (wife, mother, sister, etc.) used to amputate one or more parts of their fingers. Today this custom no longer exists, but the elder women in the tribe still carry the marks of the ritual. 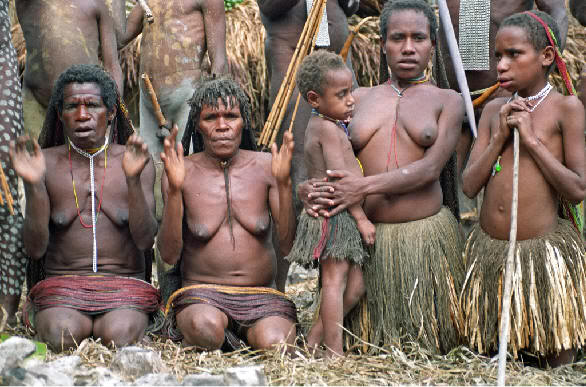 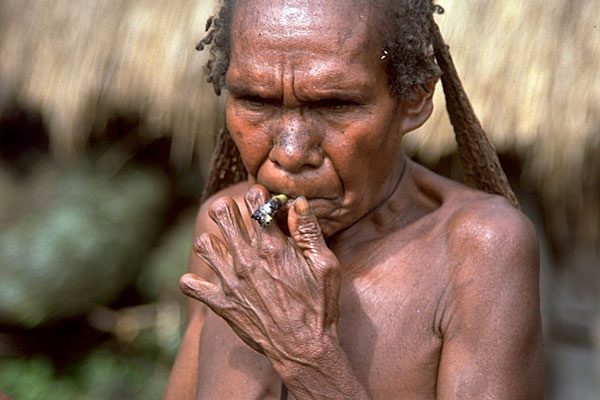 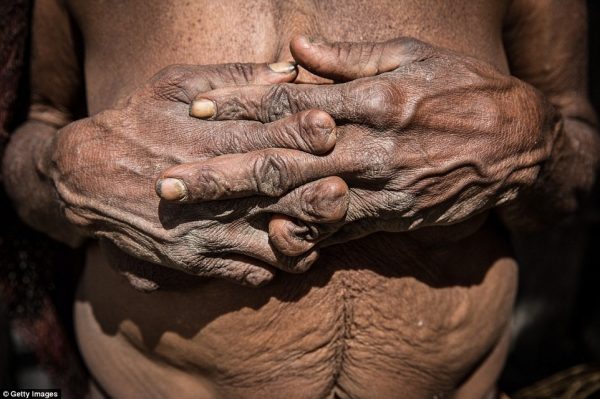 Allow me now a brief digression.

In Dino Buzzati‘s wonderful tale The Humps in the Garden (published in 1968 in La boutique del mistero), the protagonist loves to take long, late-night walks in the park surrounding his home. One evening, while he’s promenading, he stumbles on a sort of hump in the ground, and the following day he asks his gardener about it:

«What did you do in the garden, on the lawn there is some kind of hump, yesterday evening I stumbled on it and this morning as soon as the sun came up I saw it. It is a narrow and oblong hump, it looks like a burial mound. Will you tell me what’s happening?». «It doesn’t look like it, sir» said Giacomo the gardener «it really is a burial mound. Because yesterday, sir, a friend of yours has died».
It was true. My dearest friend Sandro Bartoli, who was twenty-one-years-old, had died in the mountains with his skull smashed.
«Are you trying to tell me» I said to Giacomo «that my friend was buried here?»
«No» he replied «your friend, Mr. Bartoli […] was buried at the foot of that mountain, as you know. But here in the garden the lawn bulged all by itself, because this is your garden, sir, and everything that happens in your life, sir, will have its consequences right here.»

Years go by, and the narrator’s park slowly fills with new humps, as his loved ones die one by one. Some bulges are small, other enormous; the garden, once flat and regular, at this point is completely packed with mounds appearing with every new loss.

Because this problem of humps in the garden happens to everybody, and every one of us […] owns a garden where these painful phenomenons take place. It is an ancient story repeating itself since the beginning of centuries, it will repeat for you too. And this isn’t a literary joke, this is how things really are.

In the tale’s final part, we discover that the protagonist is not a fictional character at all, and that the sorrowful metaphore refers to the author himself:

Naturally I also wonder if in someone else’s garden will one day appear a hump that has to do with me, maybe a second or third-rate little hump, just a slight pleating in the lawn, not even noticeable in broad daylight, when the sun shines from up high. However, one person in the world, at least one, will stumble on it. Perhaps, on the account of my bad temper, I will die alone like a dog at the end of an old and deserted hallway. And yet one person that evening will stub his toe on the little hump in the garden, and will stumble on it the following night too, and each time that person will think with a shred of regret, forgive my hopefulness, of a certain fellow whose name was Dino Buzzati. 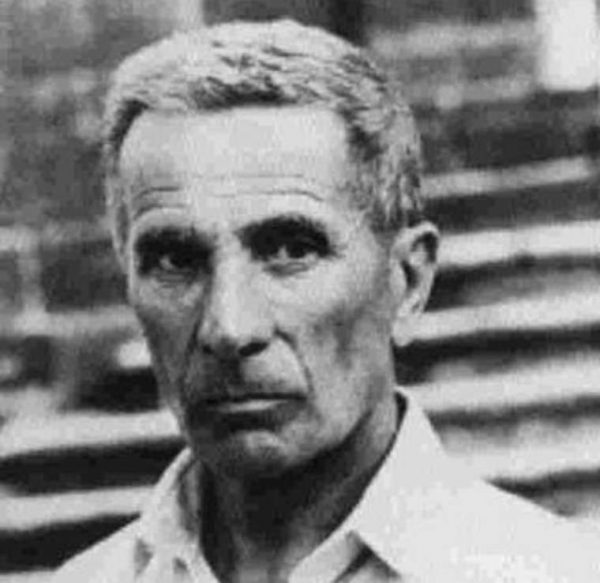 Now, if I may risk the analogy, the humps in Buzzati’s garden seem to be poetically akin to the Dani women’s missing fingers. The latter represent a touching and powerful image: each time a loved one leaves us, “we lose a bit of ourselves”, as is often said – but here the loss is not just emotional, the absence becomes concrete. On the account of this physical expression of grief, fingerless women undoubtedly have a hard time carrying out daily tasks; and further bereavements lead to the impossibility of using their hands. The oldest women, who have seen many loved ones die, need help and assistance from the community. Death becomes a wound which makes them disabled for life. 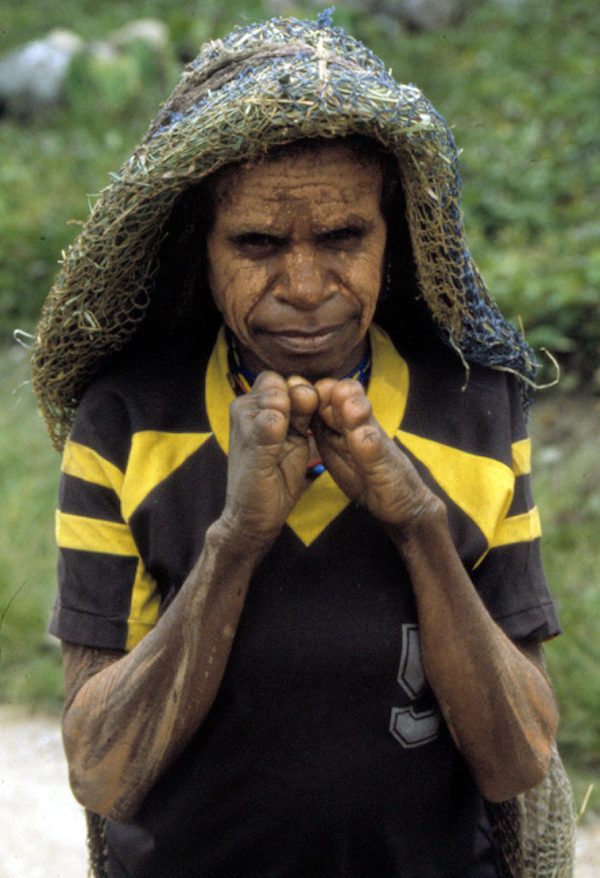 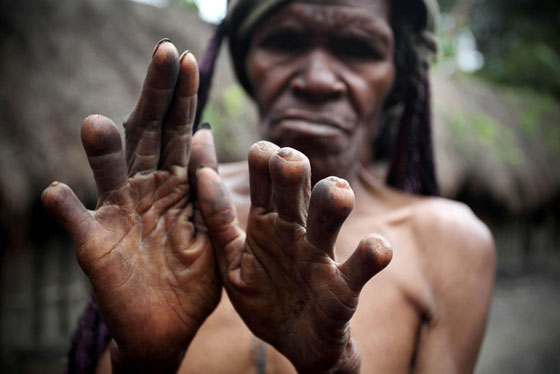 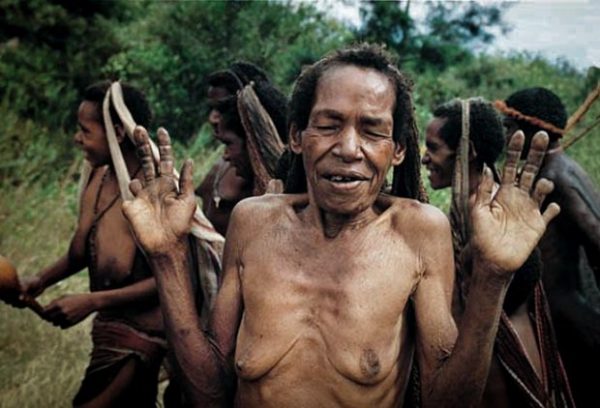 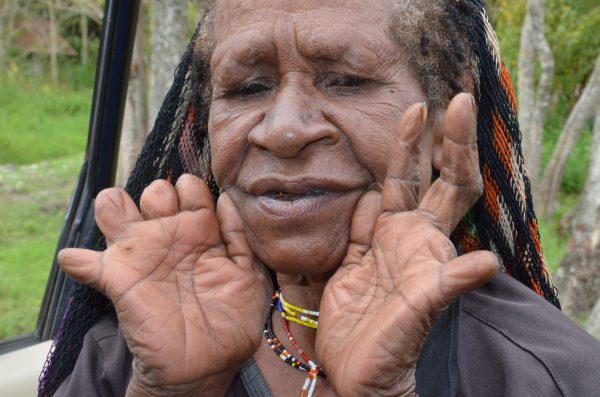 Of course, at least from a contemporary perspective, there is still a huge stumbling block: the metaphore would be perfect if such a tradition concerned also men, who instead were never expected to carry out such extreme sacrifices. It’s the female body which, more or less voluntarily, bears this visible evidence of pain.
But from a more universal perspective, it seems to me that these symbols hold the certainty that we all will leave a mark, a hump in someone else’s garden. The pride with which Dani women show their mutilated hands suggests that one person’s passage inevitably changes the reality around him, conditioning the community, even “sculpting” the flesh of his kindreds. The creation of meaning in displays of grief also lies in reciprocity – the very tradition that makes me weep for the dead today, will ensure that tomorrow others will lament my own departure.

Regardless of the historical variety of ways in which this concept was put forth, in this awareness of reciprocity human beings seem to have always found some comfort, because it eventually means that we can never be alone.