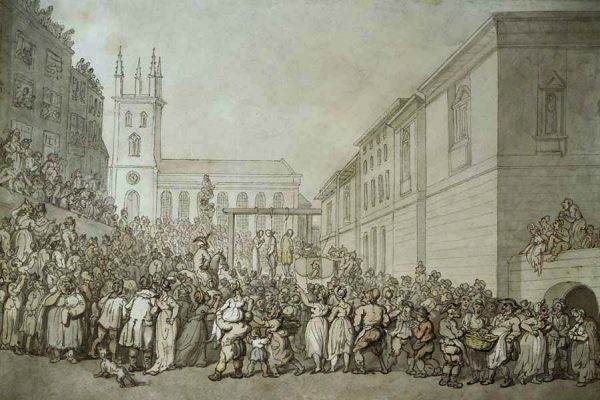 The volume Celebrated trials of all countries, and remarkable cases of criminal jurisprudence (1835) is a collection of 88 accounts of murders and curious proceedings.
Several of these anecdotes are quite interesting, but a double hanging which took place in 1807 is particularly astonishing for the collateral effects it entailed.

On November 6, 1802, John Cole Steele, owner of a lavander water deposit, was travelling from Bedfont, on the outskirts of London, to his home on Strand. It was deep in the night, and the merchant was walking alone, as he couldn’t find a coach.
The moon had just come up when Steele was surrounded by three men who were hiding in the bushes. They were John Holloway and Owen Haggerty — two small-time crooks always in trouble with the law; with them was their accomplice Benjamin Hanfield, whom they had recruited some hours earlier at an inn.
Hanfield himself would prove to be the weak link. Four years later, under the promise of a full pardon for unrelated offences, he would vividly recount in court the scene he had witnessed that night:

We presently saw a man coming towards us, and, on approaching him, we ordered him to stop, which he immediately did. Holloway went round him, and told him to deliver. He said we should have his money,
and hoped we would not ill-use him. [Steele] put his hand in his pocket, and gave Haggerty his money. I demanded his pocket-book. He replied that he had none. Holloway insisted that he had a book, and if he
did not deliver it, he would knock him down. I then laid hold of his legs. Holloway stood at his head, and swore if he cried out he would knock out his brains. [Steele] again said, he hoped we would not ill-use him. Haggerty proceeded to search him, when [Steele] made some resistance, and struggled so much that we got across the road. He cried out severely, and as a carriage was coming up, Holloway said, “Take care, I’ll silence the b—–r,” and immediately struck him several violent blows on the head and body. [Steele] heaved a heavy groan, and stretched himself out lifeless. I felt alarmed, and said, “John, you have killed the man”. Holloway replied, that it was a lie, for he was only stunned. I said I would stay no longer, and immediately set off towards London, leaving Holloway and Haggerty with the body. I came to Hounslow, and stopped at the end of the town nearly an hour. Holloway and Haggerty then came up, and said they had done the trick, and, as a token, put the deceased’s hat into my hand. […] I told Holloway it was a cruel piece of business, and that I was sorry I had any hand in it. We all turned down a lane, and returned to London. As we came along, I asked Holloway if he had got the pocketbook. He replied it was no matter, for as I had refused to share the danger, I should not share the booty. We came to the Black Horse in Dyot-street, had half a pint of gin, and parted. 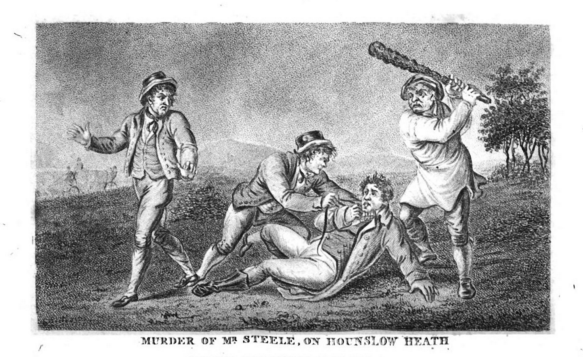 A robbery gone wrong, like many others. Holloway and Haggerty would have gotten away with it: investigations did not lead to anything for four years, until Hanfield revealed what he knew.
The two were arrested on the account of Hanfield’s testimony, and although they claimed to be innocent they were both sentenced to death: Holloway and Haggerty would hang on a Monday, February 22, 1807.
During all Sunday night, the convicts kept on shouting out they had nothing to do with the murder, their cries tearing the “awful stillness of midnight“. 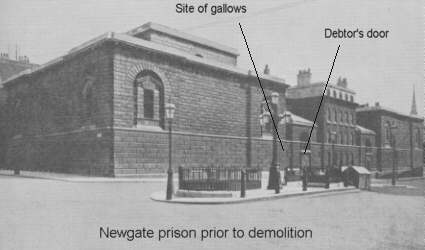 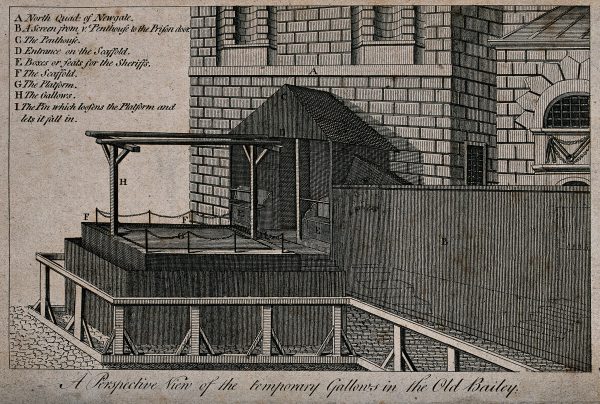 On the fatal morning, the two were brought at the Newgate gallows. Another person was to be hanged with them,  Elizabeth Godfrey, guilty of stabbing her neighbor Richard Prince.
Three simultaneous executions: that was a rare spectacle, not to be missed. For this reason around 40.000 perople gathered to witness the event, covering every inch of space outside Newgate and before the Old Bailey.

Haggertywas the first to walk up, silent and resigned. The hangman, William Brunskill, covered his head with a white hood. Then came Holloway’s turn, but the man lost his cold blood, and started yelling “I am innocent, innocent, by God!“, as his face was covered with a similar cloth. Lastly a shaking Elizabeth Godfrey was brought beside the other two.
When he finished with his prayers, the priest gestured for the executioner to carry on.
Around 8.15 the trapdoors opened under the convicts’ feet. Haggerty and Holloway died on the instant, while the woman convulsively wrestled for some time before expiring. “Dying hard“, it was called at the time. 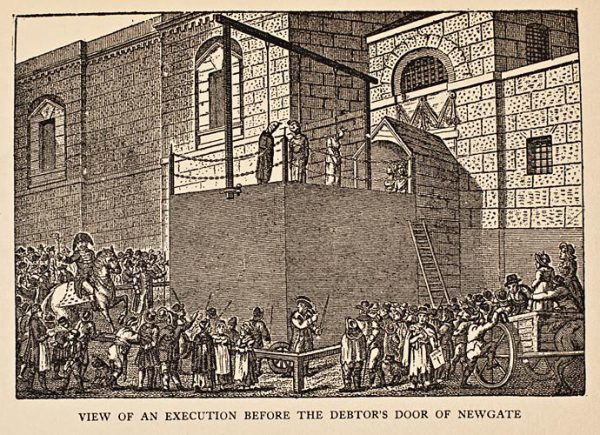 But the three hanged persons were not the only victims on that cold, deadly morning: suddenly the crowd started to move out of control like an immense tide.

The pressure of the crowd was such, that before the malefactors appeared, numbers of persons were crying out in vain to escape from it: the attempt only tended to increase the confusion. Several females of low stature, who had been so imprudent as to venture amongst the mob, were in a dismal situation: their cries were dreadful. Some who could be no longer supported by the men were suffered to fall, and were trampled to death. This was also the case with several men and boys. In all parts there were continued cries “Murder! Murder!” particularly from the female part of the spectators and children, some of whom were seen expiring without the possibility of obtaining the least assistance, every one being employed in endeavouring to preserve his own life. The most affecting scene was witnessed at Green-Arbour Lane,
nearly opposite the debtors’ door. The lamentable catastrophe which took place near this spot, was attributed to the circumstance of two pie-men attending there to dispose of their pies, and one of them having his basket overthrown, some of the mob not being aware of what had happened, and at the
same time severely pressed, fell over the basket and the man at the moment he was picking it up, together with its contents. Those who once fell were never more enabled to rise, such was the pressure of the crowd. At this fatal place, a man of the name of Herrington was thrown down, who had in his hand his younger son, a fine boy about twelve years of age. The youth was soon trampled to death; the father recovered, though much bruised, and was amongst the wounded in St. Bartholomew’s Hospital. 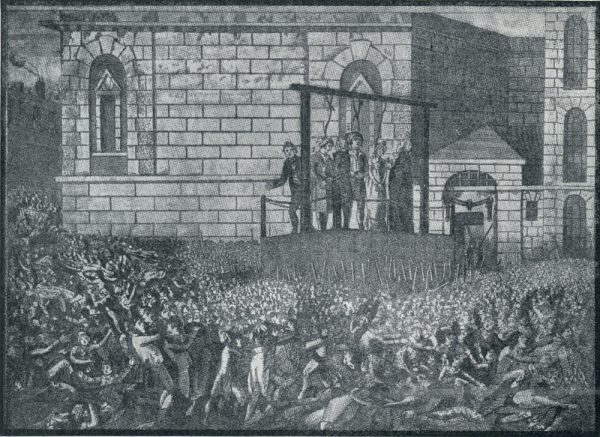 The following passage is especially dreadful:

A woman, who was so imprudent as to bring with her a child at the breast, was one of the number killed: whilst in the act of falling, she forced the child into the arms of the man nearest to her, requesting him, for God’s sake, to save its life; the man, finding it required all his exertion to preserve himself, threw the infant from him, but it was fortunately caught at a distance by anotner man, who finding it difficult to ensure its safety or his own, disposed of it in a similar way. The child was again caught by a person, who contrived to struggle with it to a cart, under which he deposited it until the danger was over, and the mob had dispersed.

Others managed to have a narrow escape, as reported by the 1807 Annual Register:

A young man […] fell down […], but kept his head uncovered, and forced his way over the dead bodies, which lay in a pile as high as the people, until he was enabled to creep over the heads of the crowd to a lamp-iron, from whence he got into the first floor window of Mr. Hazel, tallow-chandler, in the Old Bailey; he was much bruised, and must have suffered the fate of his companion, if he had not been possessed of great strength.

The maddened crowd left a scene of apocalyptic devastation.

After the bodies were cut down, and the gallows was removed to the Old Bailey yard, the marshals and constables cleared the streets where the catastrophe had occurred, when nearly one hundred persons, dead or in a state of insensibility, were found in the street. […] A mother was seen to carry away the body of her dead son; […] a sailor boy was killed opposite Newgate, by suffocation; in a small bag which he carried was a quantity of bread and cheese, and it is supposed he came some distance to witness the execution. […] Until four o’clock in the afternoon, most of the surrounding houses contained some person in a wounded state, who were afterwards taken away by their friends on shutters or in hackney coaches. At Bartholomew’s Hospital, after the bodies of the dead were stripped and washed, they were ranged round a ward, with sheets over them, and their clothes put as pillows under their heads; their faces were uncovered, and there was a rail along the centre of the room; the persons who were admitted to see the shocking spectacle, and identified many, went up on one side and returned on the other. Until two o’clock, the entrances to the hospital were beset with mothers weeping for their sons! wives for their husbands! and sisters for their brothers! and various individuals for their relatives and friends! 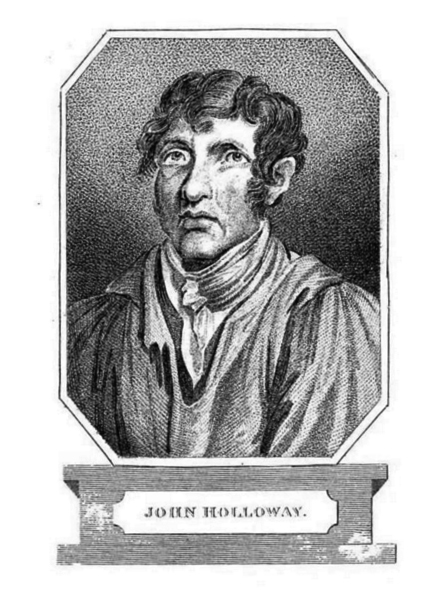 There is however one last dramatic twist in this story: in all probability, Hollow and Haggerty were really innocent after all.
Hanfield, the key witness, might have lied to have his charges condoned.

Solicitor James Harmer (the same Harmer who incidentally inspired Charles Dickens for Great Expectations), even though convinced of their culpability in the beginning, kept on investigating after the convicts death and eventually changed his mind; he even published a pamphlet on his own expenses to denounce the mistake made by the Jury. Among other things, he discovered that Hanfield had tried the same trick before, when charged with desertion in 1805: he had attempted to confess to a robbery in order to avoid military punishment.
The Court itself was aware that the real criminals had not been punished, for in 1820, 13 years after the disastrous hanging, a John Ward was accused of the murder of Steele, then acquitted for lack of evidence (see Linda Stratmann in Middlesex Murders).

In one single day, Justice had caused the death of dozens of innocent people — including the convicts.
Really one of the most unfortunate executions London had ever seen.

I wrote about capital punsihment gone wrong in the past, in this article about Jack Ketch; on the same topic you can also find this post on ‘Bloody Murders’ pamphlets from Eighteenth and Nineteenth Centuries (both articles in Italian only, sorry!).