It is estimated that over the course of only 300 years, from the 14th to the 17th century, up to 100,000 people were executed in Europe on the charge of being werewolves .
France and Germany especially found themselves under attack by these supernatural creatures, and in both countries the lycanthropy “epidemics” caused a real collective fear.
The werewolf could sometimes be the victim of a curse, but more often he was seen as a worshiper of Satan. Since turning into a wolf was considered the result of magical arts, lycanthropy trials fell into the wider phenomenon of witch-hunt.
Among historical accounts of werewolves, there is one in particular that is absolutely noteworthy. 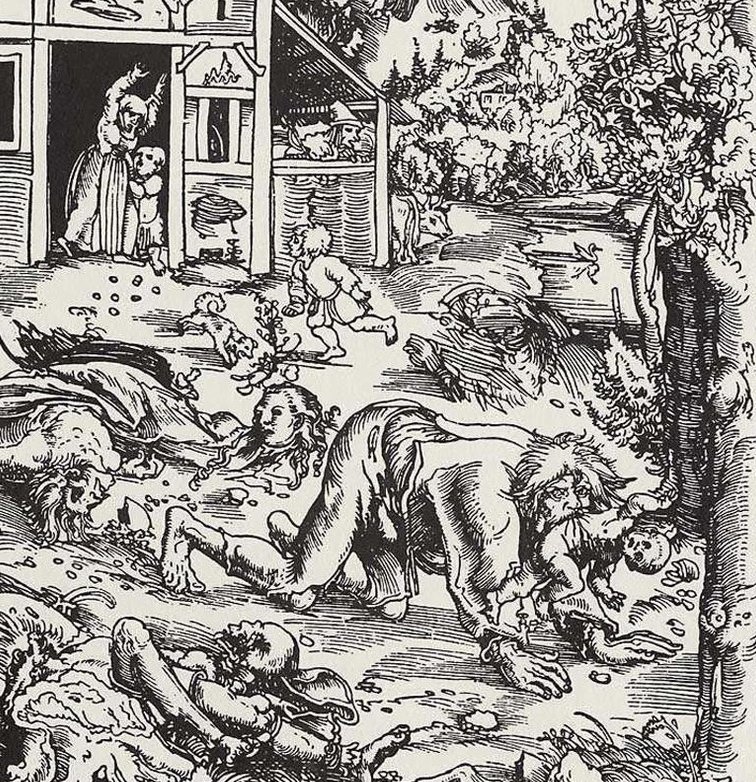 In 1685 the Principality of Ansbach included the surroundings of the Bavarian town of the same name; here a wolf began attacking livestock. The threat suddenly became more serious when the animal killed several children within a few months.
The idea immediately spread that this was no normal wolf, but rather a werewolf — on whose identity there was little doubt: the detested Michael Leicht, Burgomaster of Ansbach (a figure halfway between a mayor and a ruler), had recently died after subjecting the town to its cruel and fraudulent yoke for many years.

It was rumored that this much-hated public officer had actually managed to escape death by transferring his spirit into the body of a wolf. Some swore they saw him attend his own funeral; a contemporary flyer shows Michael Leicht who, in the form of a wolf wrapped in a white-linen shroud, returns to his old apartment, scaring the new tenants. 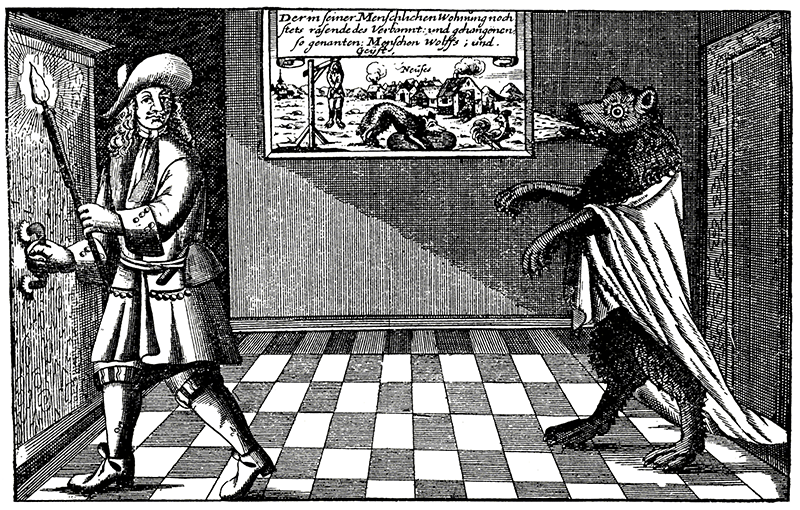 Thus hunting the fierce wolf became an imperative not only in order to protect children from further carnage, but to free the city from the spirit of the Burgomaster still haunting those places, and to avenge years of harassment.

The hunters prepared a Wolfsgrube. This “wolf pit” consisted of a hole with stone walls, about three or four meters deep, covered with branches and straw, and it was used to trap wild animals. Pieces of raw meat were placed at the bottom of the well, and often a live bait was used: a sheep, a pig or a goose. The wolf, smelling the prey, would wander around the scrubs until it fell into the trapping pit. 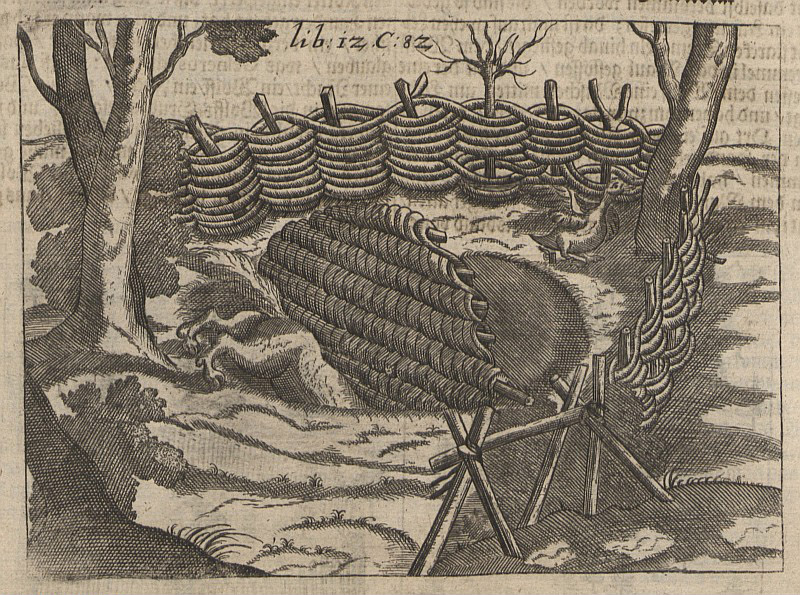 In this case, the bait was a rooster. The wolf fell into the hole and was killed by hunters.
But what happened next is the really interesting part.

The carcass of the animal was paraded through the streets, to show the danger was over. The men had prevailed over the beast.
But since this was no ordinary wolf, a more grotesque spectacle was staged. After skinning the animal, the men severed its muzzle and placed on its head a cardboard mask with Leicht’s features; they dressed it with a wig and a cloak, and hanged the wolf by a gibbet erected on a nearby hill, so that it was clearly visible.

A poem from the time reads:

I, wolf, was a grim beast and devourer of many children
Which I far preferred to fat sheep and steers;
A rooster killed me, a well was my death.
I now hang from the gallows, for the ridicule of all people.
As a spirit and a wolf, I bothered men
How appropriate, now that people say:
“Ah! You damned spirit who entered the wolf,
You now swing from the gallows disguised as a man
This is your fair compensation, the gift you have earned;
This you deserve, a gibbet is your grave.
Take this reward, because you have devoured the sons of men
Like a fierce and ferocious beast, a real child eater. “ 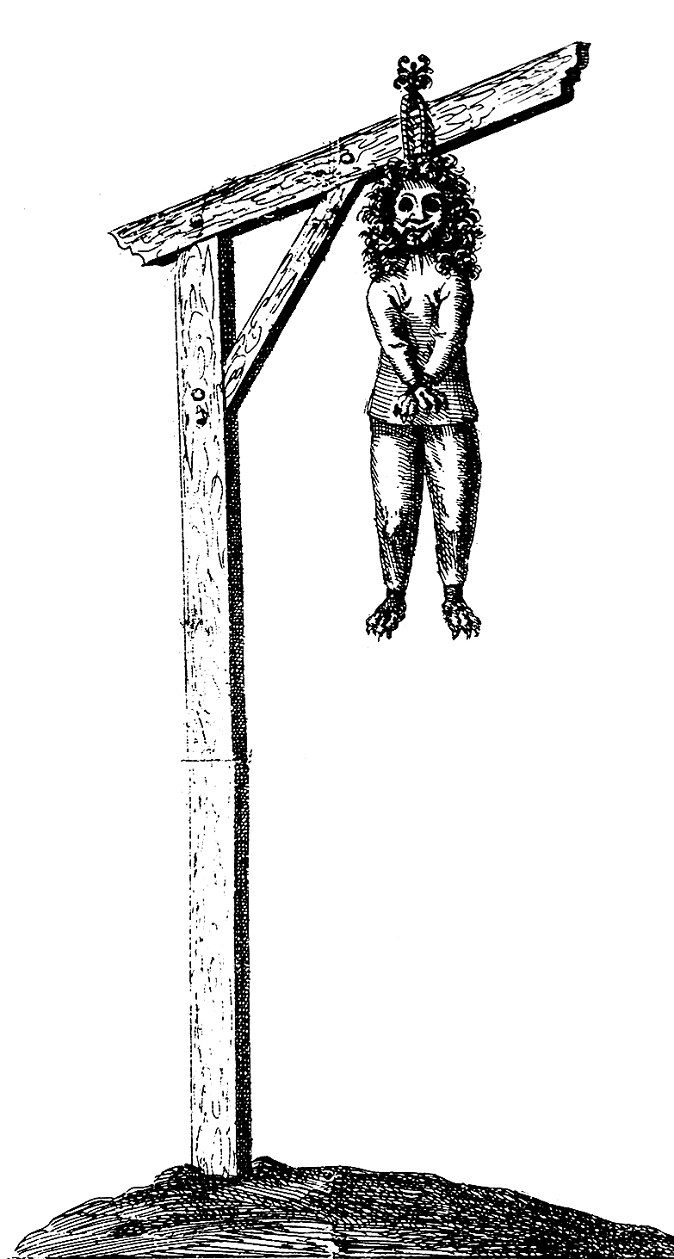 The punishment reserved for this demonic beast is subtler than it might seem, because it actually serves a double symbolic purpose.

On the one hand, depriving the wolf of his fur and replacing it with human clothes meant showing Satan himself that his tricks did not work. The townspeople of Ansbach were able to recognize the man concealing under the fur; this was therefore a warning, addressed to the Devil himself — this how your evil servants end up, around here! — and it had a clear apotropaic intent.

On the other hand, there was an undeniable political aspect. This was a “by proxy” execution of the former ruler; the commoners, who had failed to overthrow their oppressor while he was alive, did so post-mortem.
One may wonder: was this a warning to the new burgomaster, so that he would keep in line? Or was the new ruler himself behind this staging? Such a striking public show could be a good way for him to earn his subjects’ trust, a way of distancing himself from the tyranny of his predecessor.
In any case, the political message was clear, even for those who did not believe in werewolves: this act was meant to mark the end of a dark era. 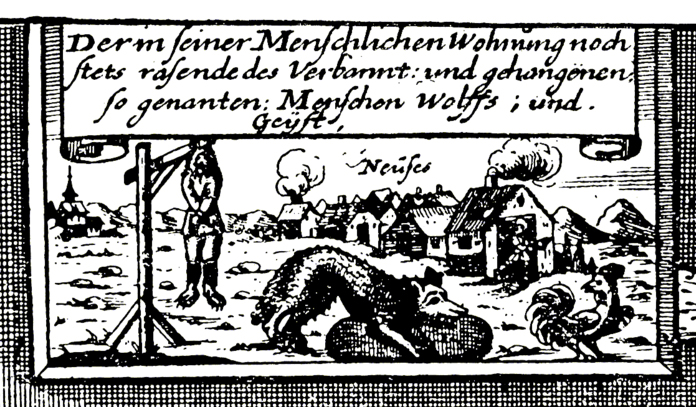 As this episode demonstrates, we would be wrong to see lycanthropy trials as simple and blind mass hysteria, fueled by superstition. Even though they were a product of  fear in times of great epidemics, as well as economic, political and social instability, werewolf trials sometimes involved stratified levels of meaning which were far from being unintentional.
While courts condemned hundreds of people to be burned at the stake, intellectuals debated how it was possible for a man to turn into a wolf. And they were surprisingly quite aware that the problem lied in telling the legend from the truth.

For instance one of the most brilliant treatises on the subject, the Discourse on Lycanthropy (1599) by Jean Beauvoys de Chauvincourt, traces the origins of the werewolf in Greek mythology, spending several pages to discern between which ancient stories had to be considered simple allegories, and which ones could hide a kernel of truth.

But what exactly was this truth? What was going on during a lycanthropy episode? Can we in all rationality, wonders Beauvoys, believe that a man has the magical power of changing his physical form?
And then there was a more delicate question, of theological nature. How could Satan transform what God had created, replacing the Almighty in a sort of “second creation”? Crediting the Devil with such high power was inadmissible, since only God could turn water into wine, Lot’s wife into salt, or Moses’ rod into a snake. 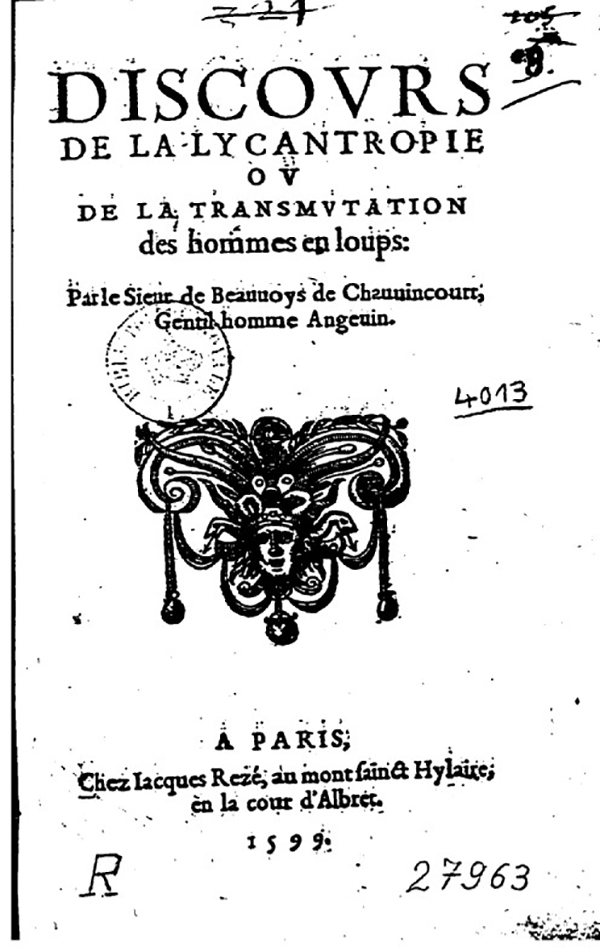 In his treatise Beauvoys devises an extremely ingenious solution, a true marvel of balance to get himself out of the impasse.
Since endorsing the possibility of an actual man-to-wolf transformation would lead him dangerously close to blasphemous or at least heretical positions, he opts for a double demonic illusion.

The first illusion affects the werewolves themselves: Satan, “thanks to his pure and simple subtlety, by penetrating into their bodies and occupying their internal organs, becomes their true owner, and persuades them of what he wants. Troubling their imagination, he makes them believe they are brutal beasts, and infuses them with the same desires and attractions those animals have, up to the point that they begin having frequent carnal unions with those of their kind“. Thus the werewolf is nothing but a man, who has lost his way and got tricked by the devil; his body is not really covered in fur, his nails do not turn into claws nor his teeth into fangs. Everything just happens in his mind (an extraordinary idea, if you think that something close to psychiatry will only appear two centuries later).

Then, by administering ointments, eye drops, creams and powders to these slaves, the Devil is able to create hallucinations even in those who have the misfortune of meeting the werewolf: “such is the smell and the air so infected by this filth that they not only affect his patient, but they are so powerful as to act on the external senses of the audience, taking possession of their eyes; disturbed by this poison, they are persuaded that these transformations are real“. 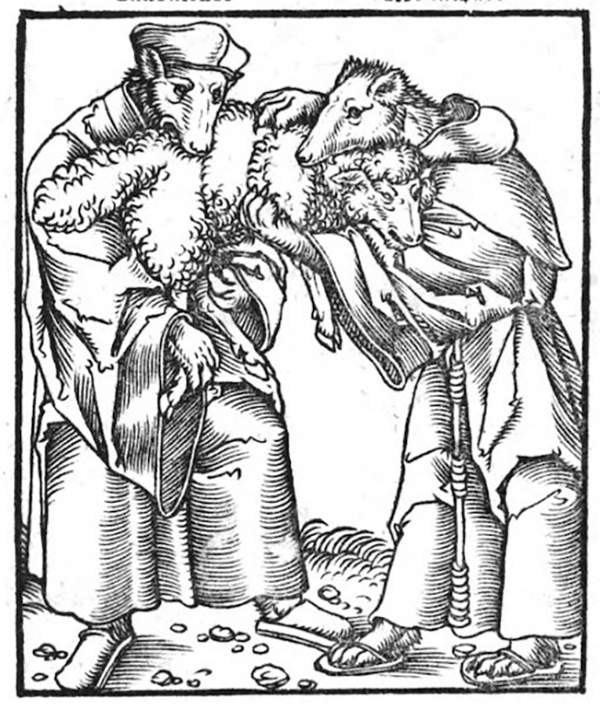 Therefore on a more superficial level, the werewolf represents the danger of abandoning oneself to bestial instincts, of losing one’s own humanity; it is a moral figure meant to illustrate what happens when man turns away from the divine light, and it signifies a recession to barbarism, the loss of the logos. 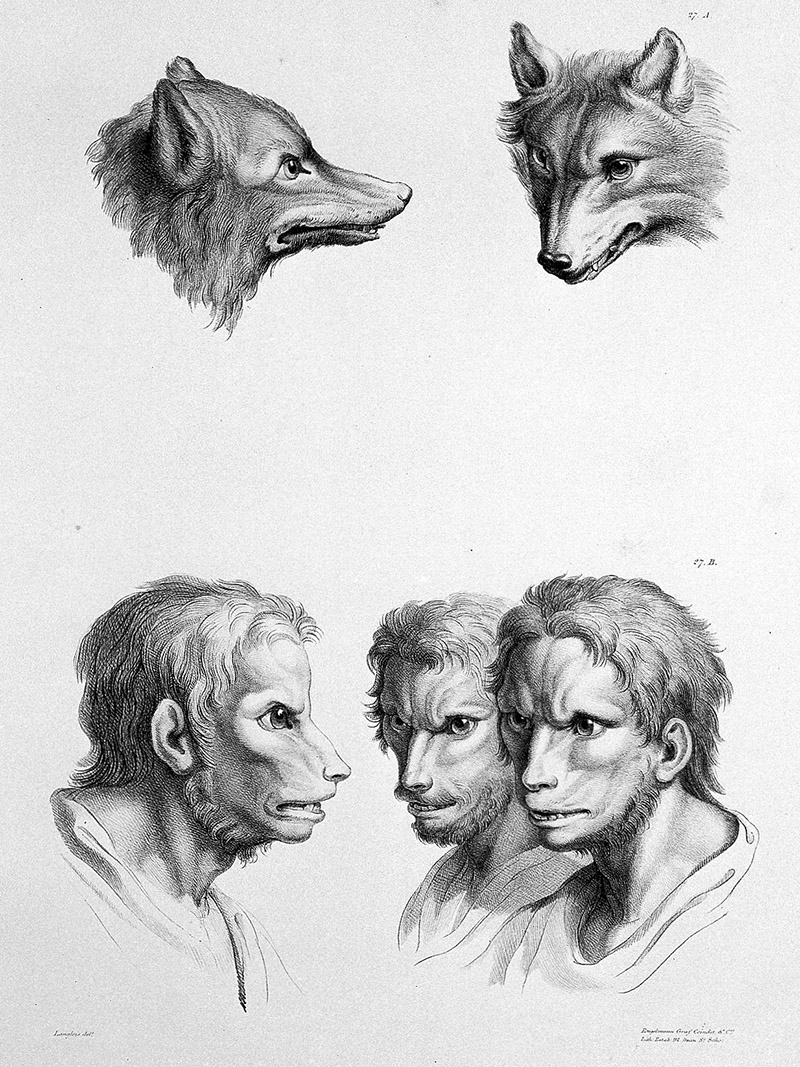 But the most frightening and uspetting fact is that a werewolf confuses and overturns the common categories of meaning. According to Beauvoys, as we have seen, its condition is both supernatural (Satan is behind it all) and natural (no actual metamorphosis is taking place). Similarly, Ansbach’s wolf is deprived of its real skin, which is seen as a fake, and it is made to wear a mock human face, recognized as its authentic nature.

The werwewolf’s destabilizing power lies in this dimension of epistemological mystery — the werewolf is like a magic trick, an illusion; it is both true and false. 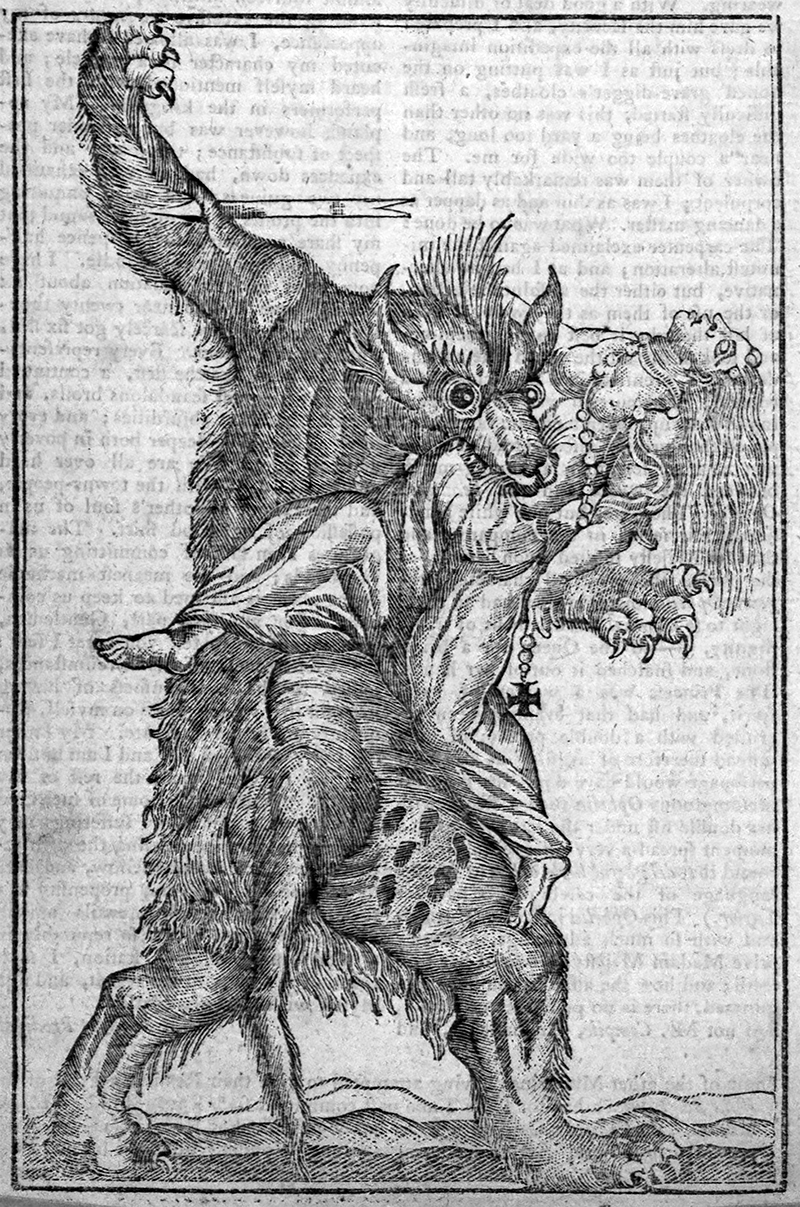