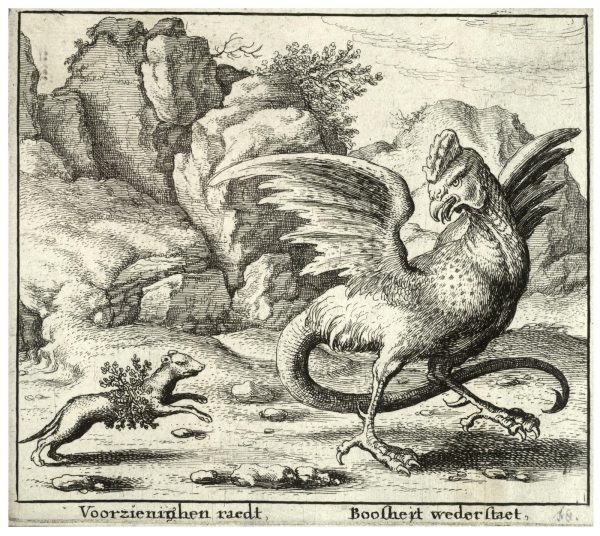 The search for wonder is far more complex than simple entertainment or superstition, and it grows along with collective spirituality. Every era has its own monsters; but the modern use of monstrosity in the horror genre or in similar contexts, makes it hard for us to understand that the monster, in the past, was meant to educate, to establish a reference in the mind of the end-user of the bizarre. Dragons, Chimeras, demons or simply animals, even if they originated from the primordial repulsion for ugliness, have been functional to spirituality (in the sense of searching for the “right way to live”), especially in Catholicism. Teratology populated every possible space, not unlike advertising does nowadays.

We are not referring here to the figure of monsters in fairy tales, where popular tradition used the scare value to set moral standards; the image of the monster has a much older and richer history than the folk tale, as it was found in books and architecture alike, originating from the ancient fear of the unknown. The fact that today we use the expressions “fantastic!” or “wonderful!” almost exclusively in a positive sense, probably comes from the monster’s transition from an iconographic, artistic element to a simple legacy of a magical, child-like world. Those monsters devouring men and women on capitals and bas-reliefs, or vomiting water in monumental fountains, do not have a strong effect on us anymore, if not as a striking heritage of a time in which fantasy was powerful and morality pretty anxious. But the monster was much more than this.

The Middle Ages, on the account of a symbolic interpretation of reality (the collective imagination was not meant to entertain, but was a fundamental part of life), established an extremely inspired creative ground out of monstrous figures, as these magical creatures crowded not only tales and beliefs (those we find for instance in Boccaccio and his salacious short stories about gullible characters) but also the spaces, the objects, the walls. The monster had to admonish about powers, duties, responibilities and, of course, provide a picture of the torments of Hell. 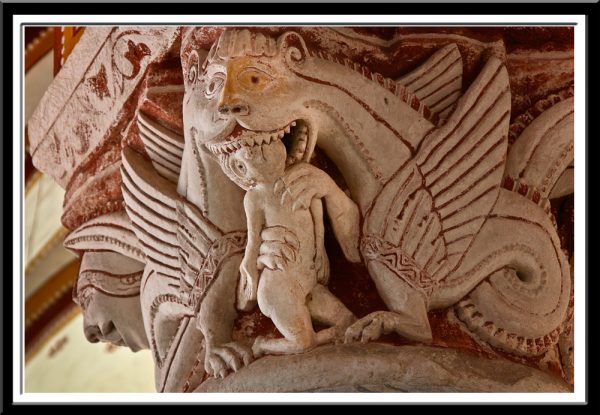 Chimeras, gryphons, unicorns, sirens, they all come from the iconographic and classical literary heritage (one of the principal sources was the Physiologus, a compendium of animals and plants, both actual and fantastic, written in the first centuries AD and widespread in the Middle Ages) and start to appear in sculptures, frescos, and medieval bas-reliefs. This polychrome teratological repertoire of ancient times was then filtered and elaborated through the christian ethics, so that each monster, each wonder would coincide with an allegory of sin, a christological metaphore, or a diabolical form. The monkey, for instance, which was already considered the ugliest of all animals by the Greeks, became the most faithful depiction of evil and falsehood, being a (failed) image of the human being, an awkward caricature devised by the Devil; centaurs, on the other hand, were shown on the Partenone friezes as violent and belligerous barbarians — an antithesis of civil human beings — but later became a symbol of the double nature of Christ, both human and divine. Nature became a mirror for the biblical truth. 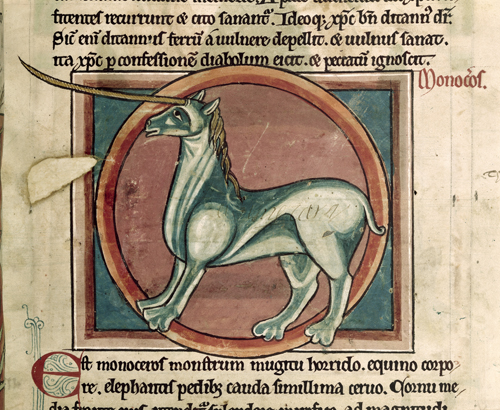 Unicorn in a bestiary. 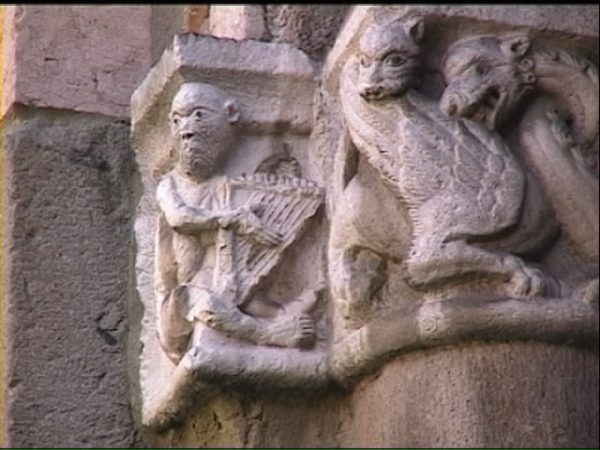 Bestiaries are maybe the most interesting example of the medieval transfiguration of reality through a christian perspective; the fact that, in the same book, real animals are examined together with imaginary beasts (even in the XVI century the great naturalist Ulisse Aldrovandi included in his wonderful Monstrorum historia a catalogue of bizarre humanoid monsters) clearly shows the medieval viewpoint, according to which everything is instilled with the same absolute truth, the ultimate good to which the faithful must aim.

Fear and horror were certainly among the principal vectors used by the Church to impress the believers (doctrine was no dialogue, but rather a passive fruition of iconographic knowledge according to the intents of commissioners and artistis), but probably in the sculptors’ and architects’ educational project were also included irony, wonder, laughter. The Devil, for instance, besides being horrible, often shows hilarious and vulgar behaviors, which could come from Carnival festivities of the time. The dense decorations and monstrous incisions encapsulate all the fervid life of the Middle Ages, with its anguish, its fear of death, the mortification of the flesh through which the idea of a second life was maintained and strenghtened; but in these images we also find some giggly outbursts, some jokes, some vicious humor. It’s hard to imagine how Bosch‘s works were perceived at the time; but his thick mass of rat-demons, winged toads and insectoid buffoons was the result of an inconographic tradition that predated him by centuries. The monsters, in the work of this great painter, already show some elements of caricature, exaggeration, mannerism; they are no longer scary. 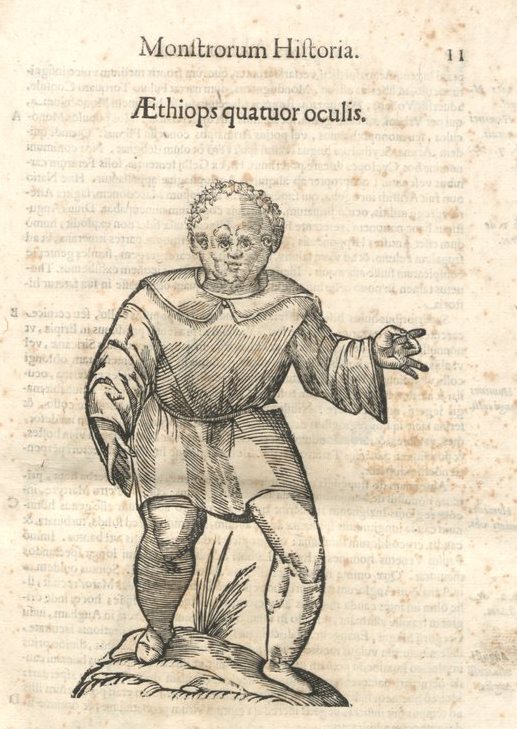 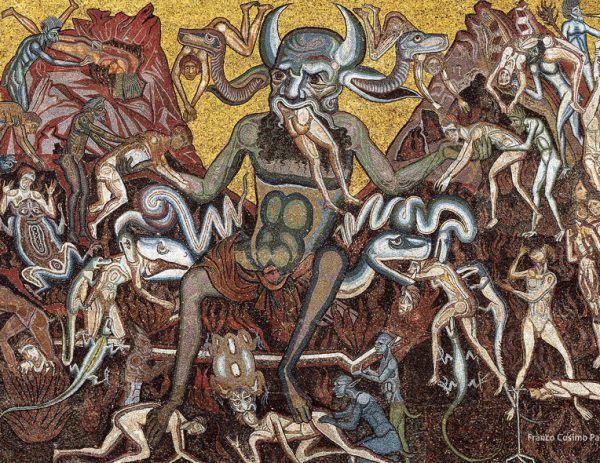 A splendid example of the “monstrous pedagogy” which adorned not only vast and imposing interiors but even the objects themselves, are the stalls, the seats used by cardinals during official functions. In her essay Anima e forma – studi sulle rappresentazioni dell’invisibile, professor Ave Appiani examines the stalls of the collegiate Church of Sant’Orso in Aosta, work of an anonymous sculptor under the priorate of Giorgio di Chillant (end of XV century). The seatbacks, the arms, the handrests and the misericordie (little shelves one could lean against while standing up during long ceremonies) are all finely engraved in the shape of monsters, animals, grotesque faces. Demons, turtles, snails, dragons, cloaked monks and basilisks offered a great and educated bestiary to the viewer of this symbolic pedagogy, perfectly and organically fused with the human environment. Similar decorations could also be admired, some decades earlier, inside the Aosta Cathedral. 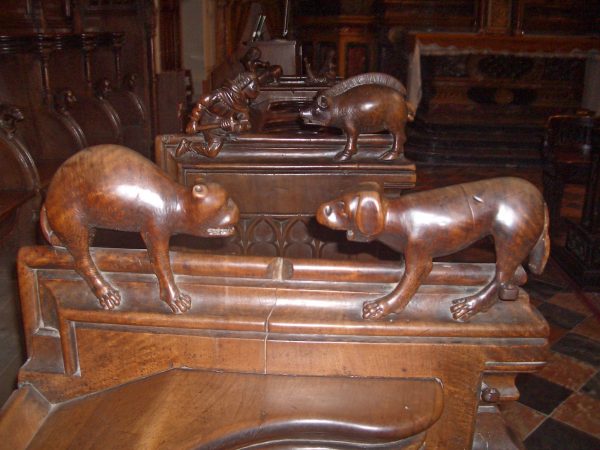 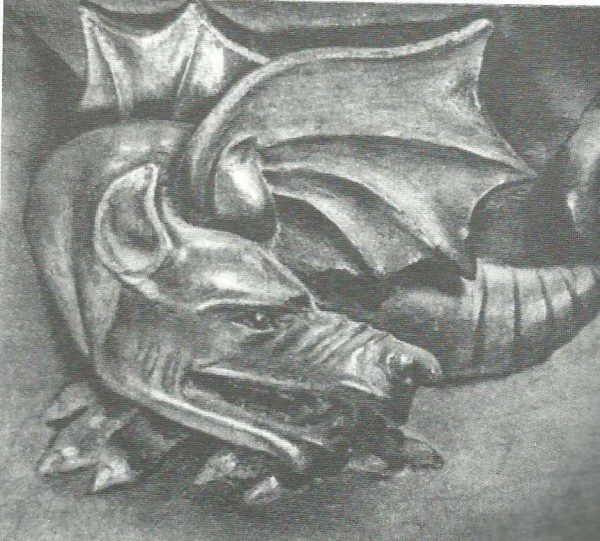 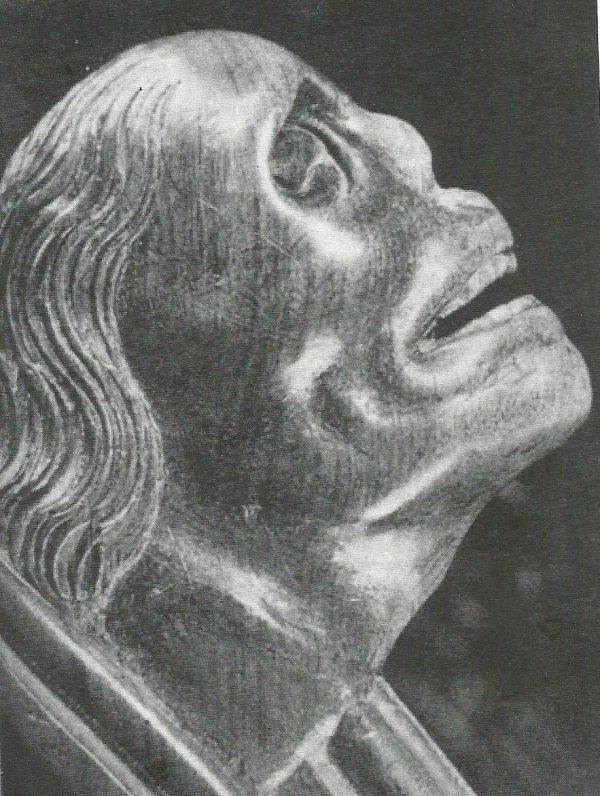 Who knows what kind of reaction this vast and ancient teratology could arouse in the believers — if only one of horror, or also curiosity and amusement; who knows if the approach of the cultivated man who sculpted this stalls — without doubt an expert of the symbolic traditions filtered through texts and legends — was serious or humorous, as he carved these eternal shapes in the wood. What did the people think before all the gargoyles, the insects, the animals living in faraway and almost mythical lands? The lion, king of the animals, was Christ, king of mankind; the boar, dwelling in the woods, was associated with the spiritual coarseness of pagans, and thus was often hunted down in the iconography; the mouse was a voracious inhabitant of the night, symbol of diabolical greed; the unicorn, attracted by chastity, after showing up in Oriental and European legends alike, came to be depicted by the side of the Virgin Mary.

Every human being finds himself tangled up in a multitude of symbols, because Death is lurking and before him man will end his earthly existence, and right there will he measure his past and evaluate his own actions. […] These are all metaphorical scenes, little tales, and just like Aesop’s fables, profusely illustrated between the Middle Ages and the Renaissance for that matter, they always show a moral which can be transcribed in terms of human actions.

So, today, how do we feel about monsters? What instruments do we have to consider the “right way to live”, since we are ever more illiterate and anonymous in giving meaning to the shape of things? It may well be that, even if we consider ourselves free from the superstitious terror of committing sin, we still have something to learn from those distant, imaginative times, when the folk tale encountered the cultivated milieu in the effort to give fear a shape – and thus, at least temporarily, dominate it.