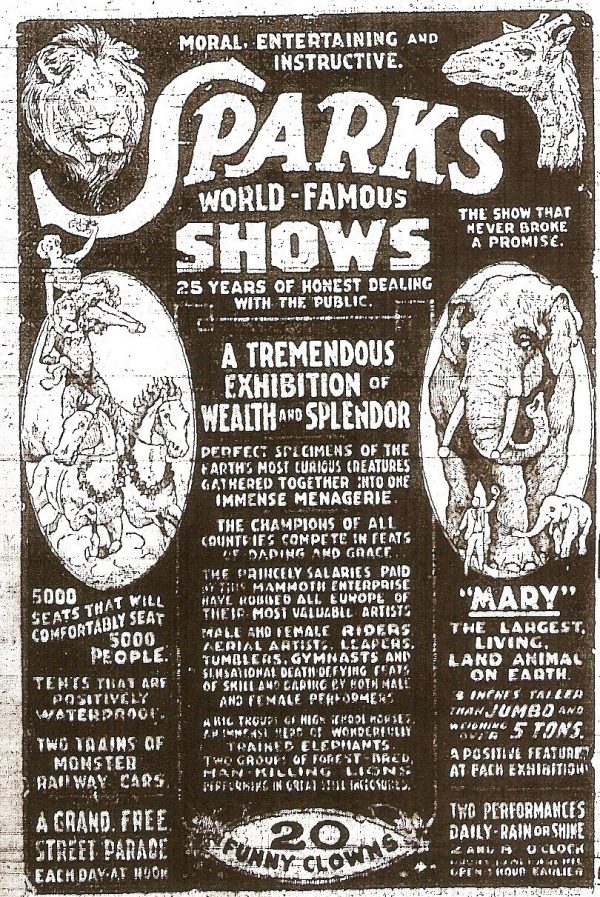 The billboards for Sparks World Famous Shows, which appeared in small Southern American towns a couple of days before the circus’ arrival, seem quite anomalous to anyone who has a familiarity with this kind of poster design from the beginning of the Twentieth Century.
Where one could expect to see emphatic titles and hyperbolic advertising claims, Sparks circus — in a much too unpretentious way — was defined as a “moral, entertaining and instructive” spectacle; instead of boasting unprecedented marvels, the only claim was that the show “never broke a promise” and publicized its “25 years of honest dealing with the public“.

The reason why owner Charlie Sparks limited himself to stress his show’s transparency and decency, was that he didn’t have much else to count on, in order to lure the crowd.
Despite Sparks’ excellent reputation (he was among the most respected impresarios in the business), his was ultimately a second-category circus. It consisted of a dozen cars, against the 42 cars of his main rival in the South, John Robinson’s Circus. Sparks had five elephants, Robinson had twelve. And both of them could never hope to compete with Barnum & Bailey’s number one circus, with its impressive 84-car railroad caravan.
Therefore Sparks World Famous Shows kept clear of big cities and made a living by serving those smaller towns, ignored by more famous circuses, where the residents would find his attractions worth paying for. 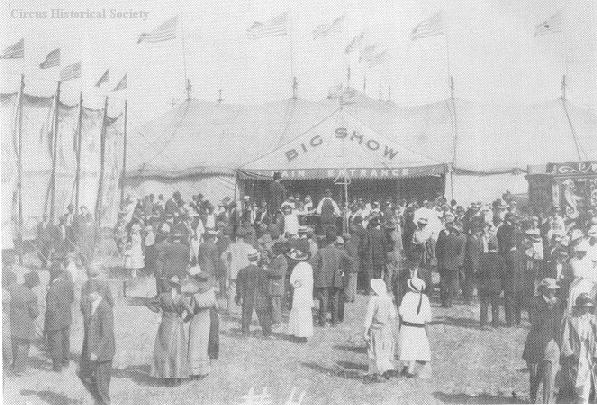 Although Sparks circus was “not spectacularly but slowly and surely” growing, in those years it didn’t offer much yet: some trained seals, some clowns, riders and gymnasts, the not-so-memorable “Man Who Walks on His Head“, and some living statues like the ones standing today on public squares, waiting for a coin.
The only real resource for Charlie Sparks, his pride and joy widely displayed on the banners, was Mary.

Advertides as being “3 inches taller than Jumbo” (Barnum’s famous elephant), Mary was a 5-ton indian pachyderm capable of playing different melodies by blowing horns, and of throwing a baseball as a pitcher in one of her most beloved routines. Mary represented the main source of income for Charlie Sparks, who loved her not just for economical but also for sentimental reasons: she was the only real superior element of his circus, and his excuse for dreaming of entering the history of entertainment.
And in a sense it is because of Mary if Sparks is still remembered today, even if not for the reason he might have suspected or wanted.

On September 11, 1916, Sparks pitched his Big Top in St. Paul, a mining town in Clinch River Valley, Virginia. On that very day Walter “Red” Eldridge, a janitor in a local hotel, decided that he had enough of sweeping floors, and joined the circus.
Altough Red was a former hobo, and clearly knew nothing about elephants, he was entrusted with leading the pachyderms during the parade Sparks ran through the city streets every afternoon before the show.
The next day the circus moved to Kingsport, Tennessee, where Mary paraded quietly along the main street, until the elephants were brought over to a ditch to be watered. And here the accounts begin to vary: what we know for sure is that Red hit Mary with a stick, infuriating the beast.
The rogue elephant grabbed the inexperienced handler with its trunk, and threw him in the air. When the body fell back on the ground, Mary began to trample him and eventually crushed his head under her foot. “And blood and brains and stuff just squirted all over the street“, as one witness put it.

Charlie Sparks immediately found himself in the middle of the worst nightmare.
Aside from his employee’s death on a public street — not really a “moral” and “instructive” spectacle — the real problem was that the whole tour was now in jeopardy: what town would allow an out-of-control elephant near its limits?
The crowd demanded the animal to be suppressed and Sparks unwillingly understood that if he wanted to save what was left of his enterprise, Mary had to be sacrified and, with her, his personal dreams of grandeur.
But killing an elephant is no easy task.

The first, obvious attempt was to fire five 32-20 rounds at Mary. There’s a good reason however if elephants are called pachyderms: the thick skin barrier did not let the bullets go deep in the flesh and, despite the pain, Mary didn’t fall down. (When in 1994 Tyke, a 3.6-ton elephant, killed his handler running amok on the streets of Honolulu, it took 86 shots to stop him. Tyke became a symbol for the fights against animal cruelty in circuses, also because of the heartbreaking footage of his demise.)
Someone then suggested to try and eliminate Mary by electrocution, a method used more than a decade before in the killing of Topsy in Coney Island. But there was no nearby way of producing the electricity needed to carry out the execution.
Therefore it was decided that Mary would be hung. 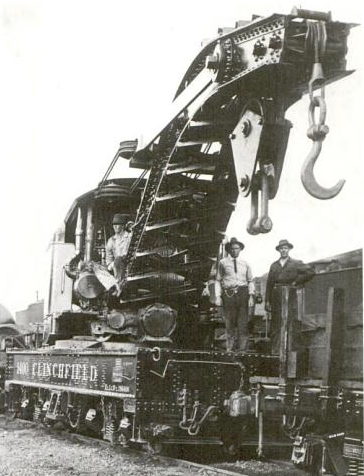 The only gallows that could bear such a weight was to be found in the railyards in Erwin, where there was a derrick capable of lifting railcars to place them on the tracks.
Charlie Sparks, knowing he was about to lose an animal worth $20.000, was determined to make the most out of the desperate situation. In the brief time that took for Mary to be moved from Kingsport to Erwin, he had already turned his elephant’s execution into a public event. 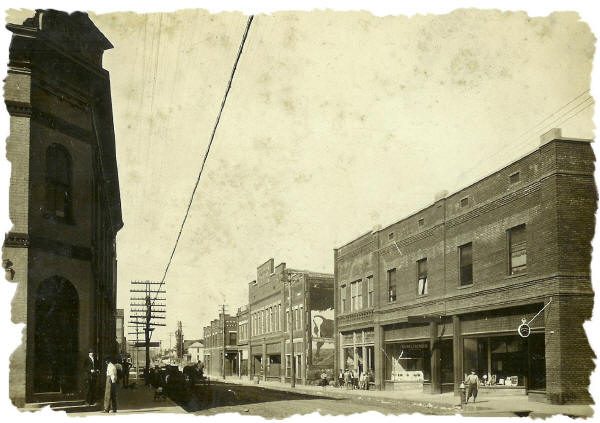 On September 13, on a rainy and foggy afternoon, more than 2.500 people gathered at the railyards. Children stood in the front line to witness the extraordinary endeavour.
Mary was brought to the makeshift gallows, and her foot was chained to the tracks while men struggled to pass a chain around her neck. They then tied the chain to the derric, started the winch, and the hanging began.
In theory, the weight of her body would have had to quickly break her neck. But Mary’s agony was to be far from swift and painless; in the heat of the moment, someone forgot to untie the animal’s foot, which was still bound to the rails. 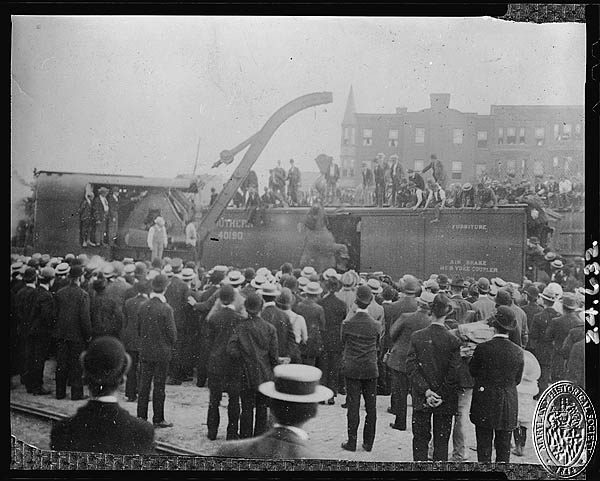 “When they began to lift her up — a witness recalled — I heard the bones and ligaments cracking in her foot“; the men hastily released the foot, but right then the chain around Mary’s neck broke with a metallic crack.

The elephant fell on the ground and sat there upright, unable to move because in falling she had broken her hip. 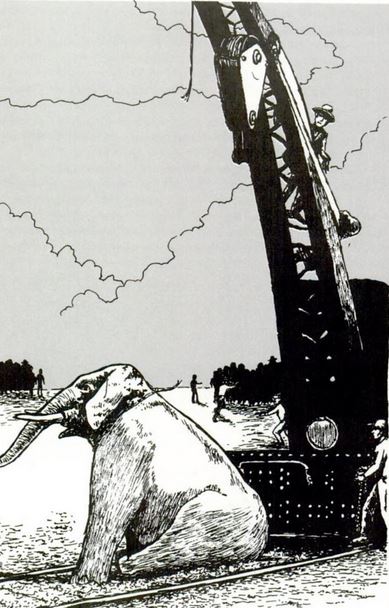 The crowd, unaware that Mary at this point was wounded and paralyzed, panicked upon seeing the “murderous” elephant free from any restraint. As everyone ran for cover, one of the roustabouts climbed on the animal’s back and applaied a heavier chain to her neck.
The derrick once more began to lift the elephant, and this time the chain held the weight.
After she was dead, Mary was left to hang for half an hour. Her huge body was then buried in a large grave which had been excavated further up the tracks. 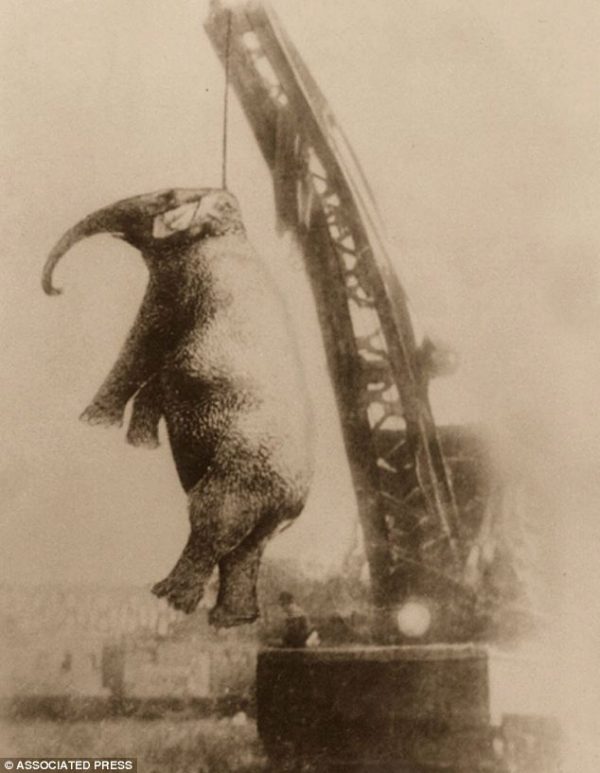 Mary’s execution, and the photograph of her hanging, were widely reported in the press. But to search for an article where this strange story was recounted with special emotion or participation would be useless. Back then, Mary’s incident was little more than quintessential, small-town oddity piece of news.
After all, people were used to much worse. In Erwin, in those very years, a black man was burned alive on a pile of crosstiles. 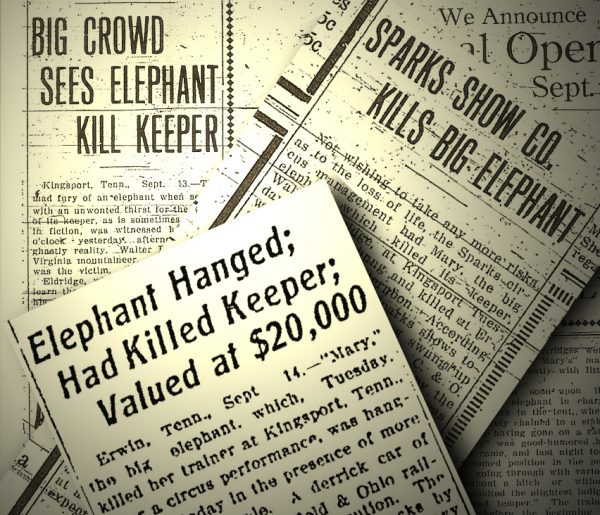 Today the residents of this serene Tennessee town are understandably tired of being associated with a bizarre and sad page of the city history — a century-old one, at that.
And yet still today some passing foreigner asks the proverbial, unpleasand question.
“Didn’t they hang an elephant here?“ 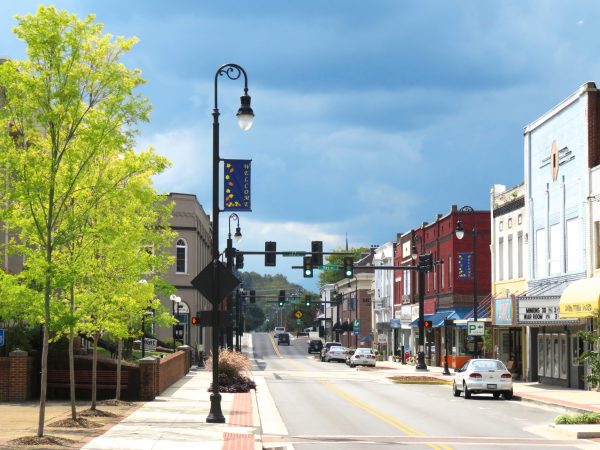 A well-researched book on Mary’s story is The Day They Hung the Elephant by Charles E. Price. On Youtube you can find a short documentary entitled Hanging Over Erwin: The Execution of Big Mary.