They give birth astride of a grave,
the light gleams an instant,
then it’s night once more. 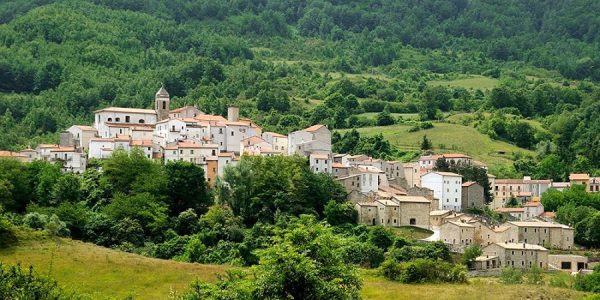 Castel del Giudice, Italy.
On the 5th of August 1875, a pregnant woman, indicated in the documents with the initials F. D’A., died during labor, before being able to give birth to her child.
On the following day, without respecting the required minimum waiting time before interment, her body was lowered into the cemetery’s fossa carnaria. This was a kind of collective burial for the poorest classes, still common at the time in hundreds of Italian communes: it consisted in a sealed underground space, a room or a pit, where the corpses were stacked and left to rot (some inside coffins, others wrapped in simple shrouds). 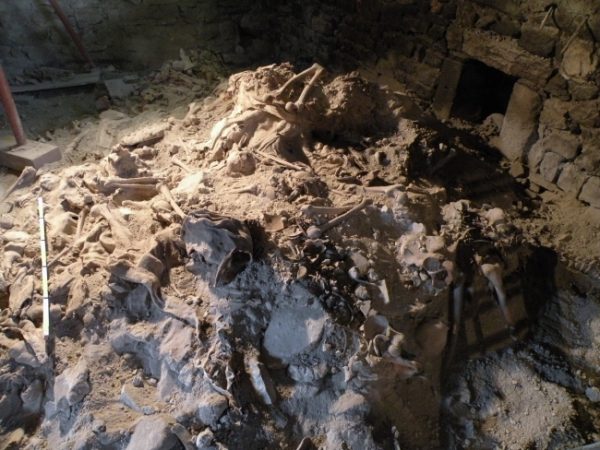 For the body of F. D’A., things began to get ugly right from the start:

She had to be lowered in the pit, so the corpse was secured with a rope, but the rope broke and D’A.’s poor body fell from a certain height, her head bumping into a casket. Some people climbed down, they took D’A. and arranged her on her back upon a nearby coffin, where she laid down with a deathly pale face, her hands tied together and resting on her abdomen, her legs joined by stitched stockings. Thus, and not otherwise, D’A. was left by the participants who buried her.

But when, a couple of days later, the pit was opened again in order to bury another deceased girl, a terrible vision awaited the bystanders:

F. D’A.’s sister hurried to give a last goodbye to her dead relative, but as soon as she looked down to the place where her sister was laid to rest, she had to observe the miserable spectacle of her sister placed in a very different position from the one she had been left in; between her legs was the fetus she had given birth to, inside the grave, and together with whom she had miserably died. […] Officers immediately arrived, and found D’A.’s body lying on her left side, her face intensely strained; her hands, still tied by a white cotton ribbon, formed an arch with her arms and rested on her forehead, while pieces of white ribbon were found between her teeth […]. At the mother’s feet stood a male newborn child with his umbilical cord, showing well-proportioned and developed limbs.

Imagine the horror of the poor woman, waking up in the dark in the grip of labor pains; with her last remaining energy she had succeeded in giving birth to her child, only to die shortly after, “besieged by corpses, lacking air, assistance or food, and exhausted by the blood loss suffered during delivery“.
One could hardly picture a more dreadful fate. 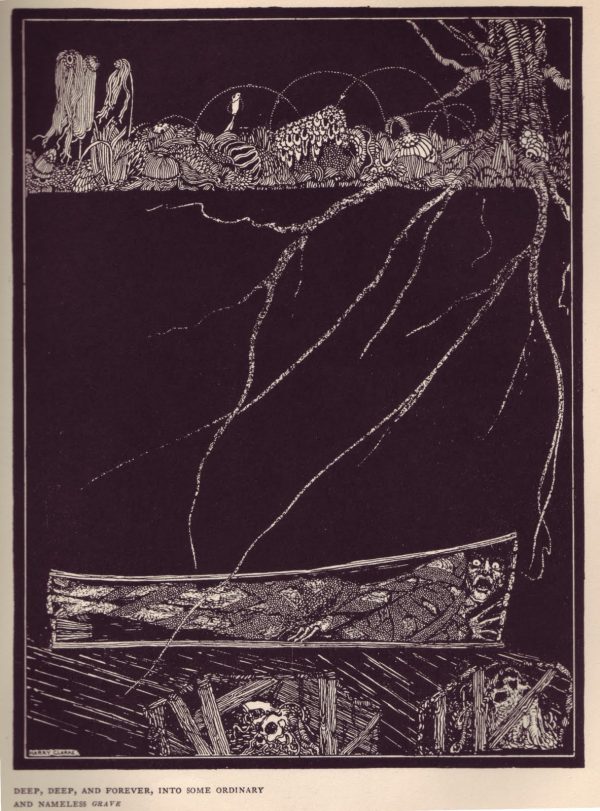 The case had a huge resonance all across Italy; a trial took place at the Court of Isernia, and the town physician, the mayor and the undertaker were found guilty of two involuntary murders “aggravated by gross negligence“, sentenced to six months in jail and fined (51 liras) – but the punishment was later cut by half by the Court of Appeal of Naples in November 1877.
This unprecedented reduction of penalty was harshly criticized by the Times correspondant in Italy, who observed that “the circumstances of the case, if well analyzed, show the slight value which is attached to human life in this country“; the news also appeared in the New York Times as well as in other British and American newspapers.

This story, however scary – because it is so scary – should be taken with a pinch of salt.
There’s more than one reason to be careful. 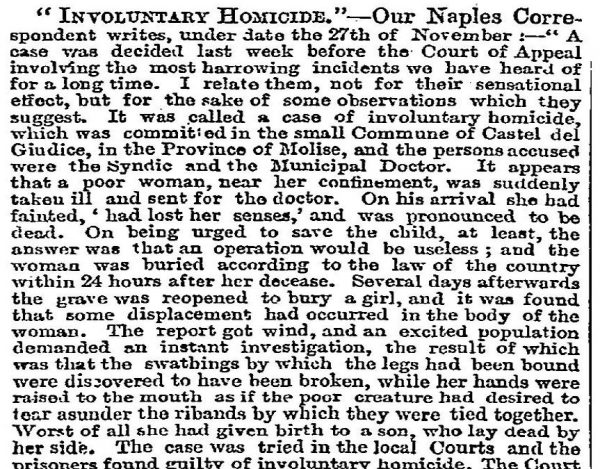 First of all, the theme of a pregnant woman believed dead and giving birth in a grave was already a recurring motif in the Nineteeth Century, as taphophobia (the fear of being buried alive) reached its peak.

Folklorist Paul Barber in his Vampires, Burial, and Death: Folklore and Reality (1988) argues that the number of people actually buried alive was highly exaggerated in the chronicles; a stance also shared by Jan Bondeson, who in one of the most complete books on the subject, Buried Alive, shows how the large majority of nineteenth-century premature burial accounts are not reliable. 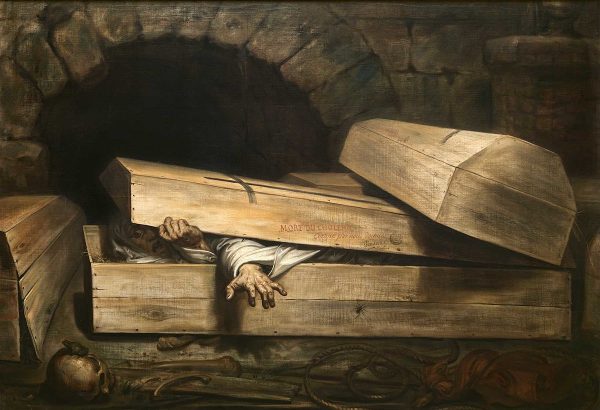 For the most part it would seem to be a romantic, decadent literary topos, albeit inspired by a danger that was certainly real in the past centuries: interpreting the signs of death was a complex and often approximate procedure, so much so that by the 1700s some treatises (the most famous one being Winslow‘s) introduced a series of measures to verify with greater accuracy the passing of a patient.

A superficial knowledge of decomposition processes could also lead to misunderstandings.
When bodies were exhumed, it was not uncommon to find their position had changed; this was due to the cadaver’s natural tendency to move during decomposition, and to be sometimes subjected to small “explosions” caused by putrefaction gasses – explosions that are powerful enough to rotate the body’s upper limbs. Likewise, the marks left by rodents or other scavengers (loose dirt, scratches, bite marks, torn clothes, fallen hair) could be mistaken for the deceased person’s desperate attempts at getting out.

Yet, as we’ve said, there was a part of truth, and some unfortunate people surely ended up alive inside a coffin. Even with all our modern diagnostic tools, every now and then someone wakes up in a morgue. But these events are, today like yesterday, extremely rare, and these stories speak more about a cultural fear rather than a concrete risk. 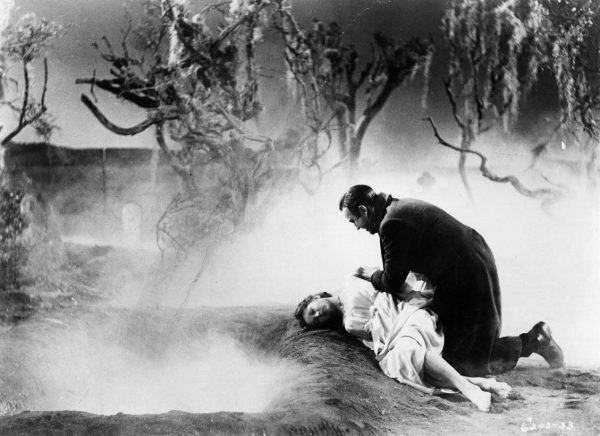 If being buried alive was already an exceptional fact, then the chances of a pregnant woman actually giving birth inside a grave look even slimmer. But this idea – so charged with pathos it could only fascinate the Victorian sensibility – might as well have come from real observations. Opening a woman’s grave and finding a stillborn child must have looked like a definitive proof of her premature burial.
What wasn’t known at the time is that the fetus can, in rare circumstances, be expelled postmortem.

Anaerobic microorganisms, which start the cadaver’s putrefactive phase, release several gasses during their metabolic activity. During this emphysematous stage, internal tissues stretch and tighten; the torso, abdomen and legs swell; the internal pressure caused by the accumulation of gas can lead, within the body of a woman in the late stages of pregnancy, to a separation of amniotic membranes, a prolapse of the uterus and a subsequent total or partial extrusion of the fetus.
This event appears to be more likely if the dead woman has been pregnant before, on the account of a more elastic cervix.
This  strange phenomenon is called Sarggeburt (coffin birth) in early German forensic literature. 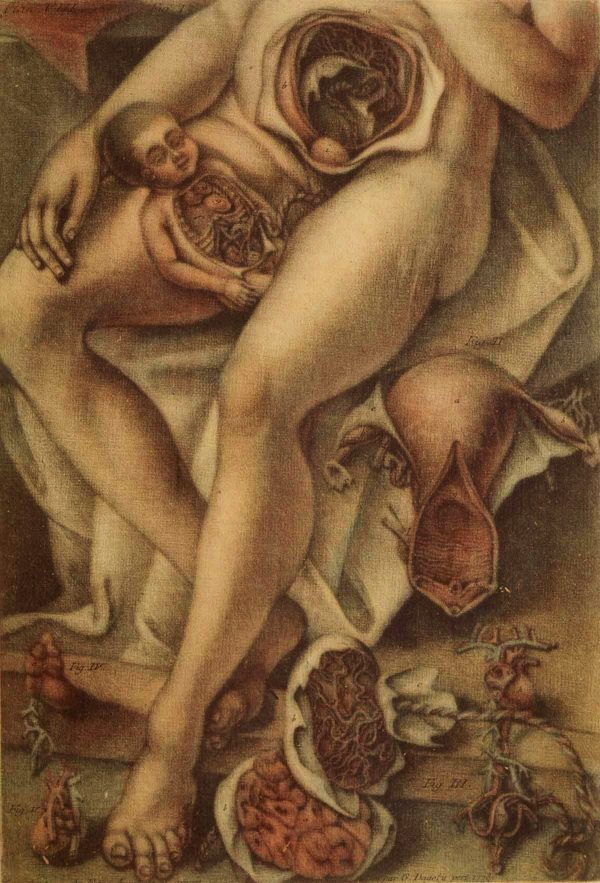 The first case of postmortem delivery dates back to 1551, when a woman hanged on the gallows released, four hours after her execution, the bodies of two twins, both dead. (A very similar episode happened in 2007 in India, when a woman killed herself during labor; in that instance, the baby was found alive and healthy.)
In Brussels, in 1633, a woman died of convulsions and three days later a fetus was spontaneously expelled. The same thing happened in Weißenfels, Saxony, in 1861. Other cases are mentioned in the first medical book to address this strange event, Anomalies and Curiosities of Medicine, published in 1896, but for the most part these accidents occurred when the body of the mother had yet to be buried.
It was John Whitridge Williams who, in his fortunate Obstetrics: a text-book for the use of students and practitioners (1904), pointed to the possibility of postmortem delivery taking place after burial.

Fetal extrusion after the mother’s death has also been observed in recent times.

A 2005 case involved a woman who died in her apartment from acute heroine intoxication: upon finding her body, it was noted that the fetus head was protruding from the mother’s underwear; but later on, during the autopsy, the upper part of the baby’s torso was also visible – a sign that gasses had continued to build in the abdominal region, increasing interior pressure.
In 2008 a 38 year-old, 7 months pregnant woman was found murdered in a field in advanced state of decomposition, accelerated by tropical climate. During the autopsy a fetus was found inside the woman’s slips, the umbilical cord still attached to the placenta (here is the forensic case study – WARNING: graphic).

So, going back to that unfortunate lady from Castel del Giudice, what really happened to her?
Sure, the autopsy report filed at the time and quoted in the trial papers mentioned the presence of air in the baby’s lungs, a proof that the child was born alive. And it’s possible that this was the case.

But on one hand this story fits all too perfectly within a specific popular narrative of its time, whose actual statistical incidence has been doubted by scholars; on the other, the possibility of postmortem fetal extrusion is well-documented, so much so that even archeologists sometimes struggle to interpret ancient skeletal findings showing fetuses still partially enclosed within the pelvic bone. 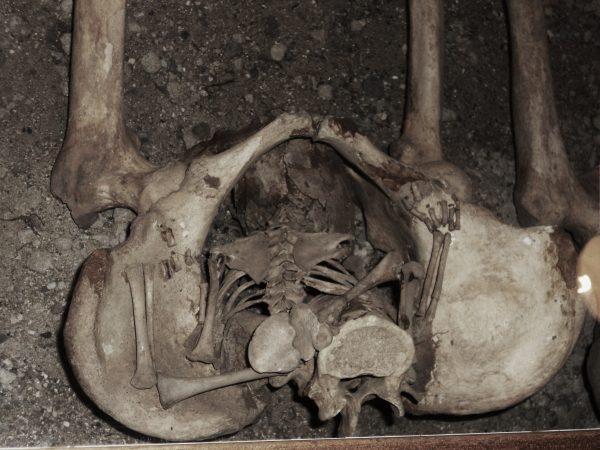 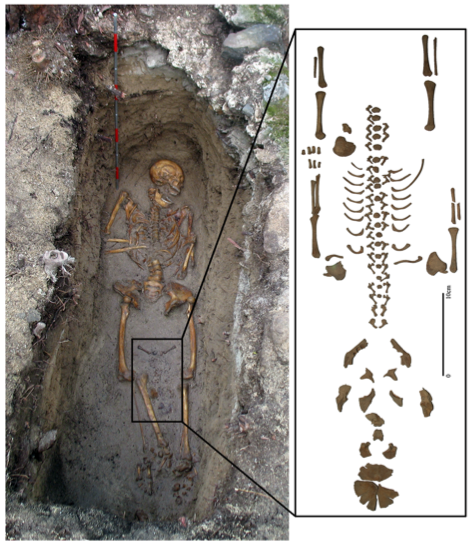 The only certain thing is that these stories – whether they’re authentic or made up – have an almost archetypal quality; birth and death entwined in a single place and time.
Maybe they’re so enthralling because, on a symbolic level, they remind us of a peculiar truth, one expressed in a famous verse from Manilius‘ Astronomica:

“As we are born we die, our end commences with our beginning.” 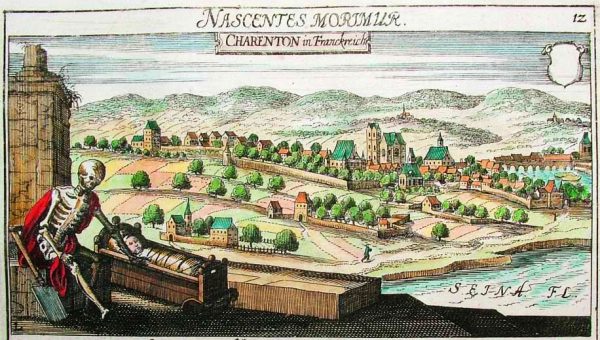