In the February 27, 1967 edition of the Associated Press this curious news appeared:

A mysterious student has been attending a class at Oregon State University for the past two months enveloped in a big black bag. Only his bare feet show. Each Monday, Wednesday and Friday at 11:00 A.M. the Black Bag sits on a small table near the back of the classroom. The class is Speech 113 – basic persuasion… Charles Goetzinger, professor of the class, knows the identity of the person inside. None of 20 students in the class do. Goetzinger said the students’ attitude changes from hostility toward the Black Bag to curiosity and finally to friendship. 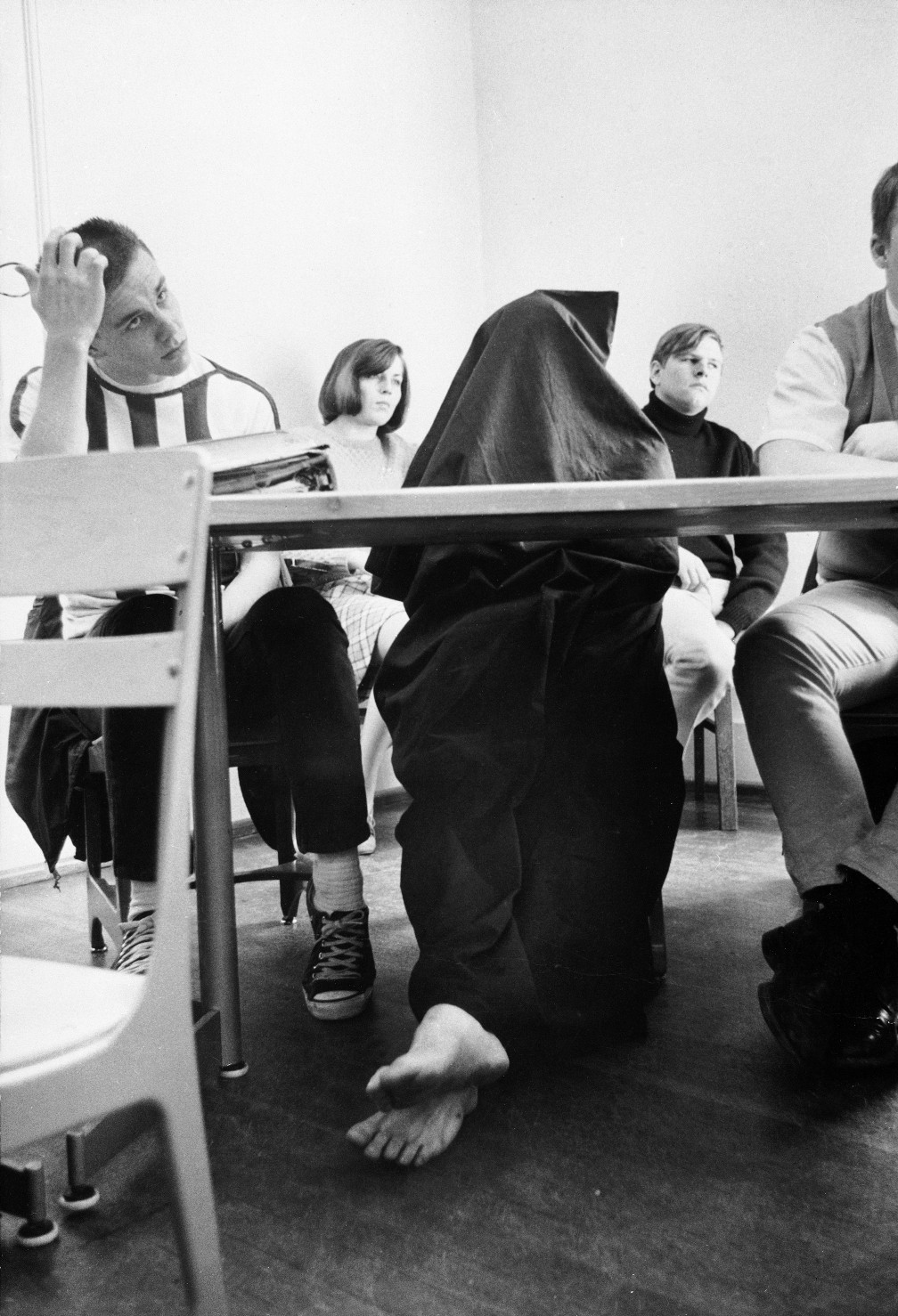 The masked student never spoke. The fact that only Goetzinger knew who was hiding under the sack, and that he had sworn to keep the secret, made many suspect that the professor himself was the author of the gimmick: was it perhaps a kind of psychological experiment? Was it just a prank, or some kind of political statement? 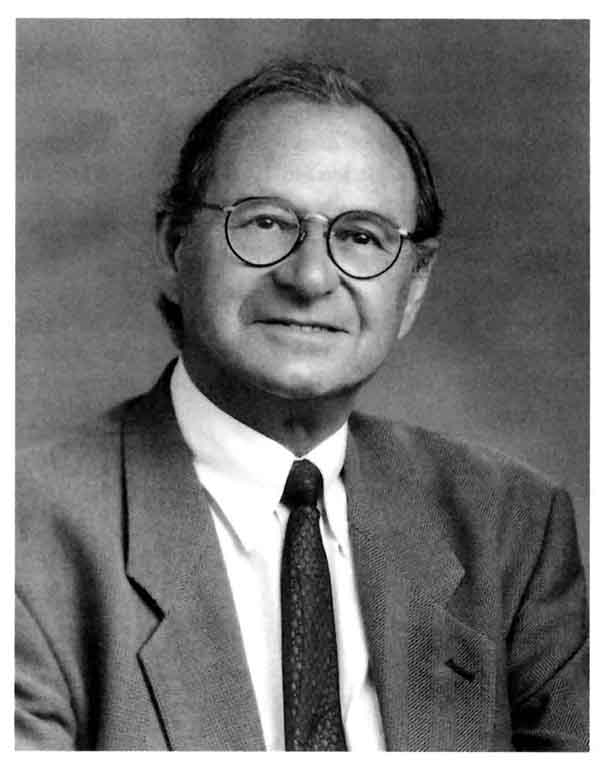 Robert Zajonc, one of the greatest pioneers of social psychology, learned of the news about Black Bag and saw in watermark the proof of the hypothesis he was working on, and which would occupy a good part of his career.
The following year, 1968, he published his landmark study entitled “Attitudinal Effects of Mere Exposure” (PDF) in the Journal of Personality and Social Psychology. 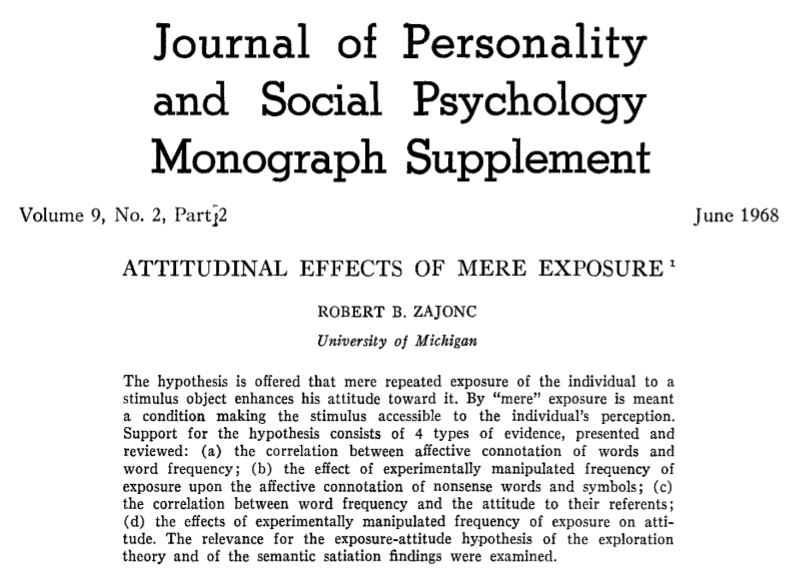 In it, Zajonc took his cue from the case of Black Bag to explain the mere-expsoure effect, or the familiarity principle: when a new and unknown stimulus is presented to us, our first reaction is one of fear or distrust; but the more we are exposed to the same stimulus, the more we develop a positive attitude towards it.

This was exactly what had happened with Black Bag’s classmates: their attitude had changed due to the simple exposure to the presence of the mysterious student, and after the initial aggressive behavior shown towards him, they had gradually come to accept him, becoming friendly and even protective towards him.

Zajonc, for his part, had conducted various kinds of experiments in this regard. In some cases he had shown the participants different faces, words, ideograms; subsequently the subjects were asked to rate their liking of a series of images. And he found that participants were more likely to feel positive about the images they had already seen during the exposure phase.

The fact that mere exposure can create familiarity should obviously not be taken as an absolute rule, because several factors can come into play; Zajonc himself noticed that the effect tended to lessen if the exposure was too prolonged, and subsequent studies have confirmed his results but also shown that things are more complex.
The fact is that marketing, which until then had always focused on the “reasoned” account of product qualities, strengthened by Zajonc’s results, focused more on so-called brand awareness, that is, on making the brand as familiar and recognizable as possible. Less explanation, more repetition: a 2007 study showed that some students exposed to a banner ad while reading an article rated that brand more favorably than its competitors, even if they didn’t remember seeing the ad at all.

The idea that the human being privileges what is familiar was certainly not new even in 1968, but Zajonc had the merit of bringing together an impressive amount of experimental data, collected in multiple contexts and conditions, to support this thesis. In his experiments he showed that often human evaluations are not based so much on reasoning, but rather on emotional reactions — such as the positive response to familiarity. In other words: most of the time we choose what we like, and only in retrospect do we rationalize our choice, looking for logical reasons for a decision that we actually made on an emotional basis. And what we like is what we already know.

This peculiarity of our behavior, which in all probability has an evolutionary basis (choosing something well-known means limiting the unexpected), can easily become a cognitive fallacy, on which big brands make millions. We always choose the same type of pasta, or the path we have traveled a thousand times, and in doing so we lose opportunities and new discoveries. 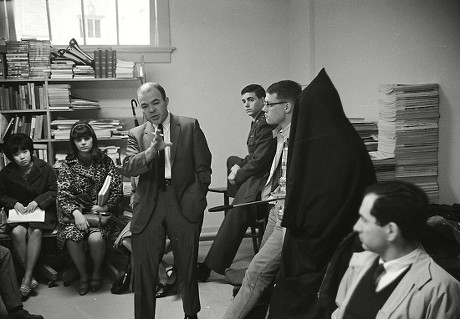 And yet … Going back to the mysterious Black Bag, are we sure that “mere exposure” can exhaust the topic? Was that all there was at stake?
One element, it seems to me, has never been taken into serious consideration in all the investigations on the episode, namely its intrinsic surrealism.

Think about it: you’re in class, and a guy dressed in a black sack walks in. This is the irruption of the fantastic into everyday life. It is the unpredictable, the weird that enters the austere and bare classroom of a university.
At first you feel staggered, perhaps a little scared but above all annoyed because that silent presence prevents you from concentrating on the words of your teacher. But then the simple fact that this “disturbing” element is breaking the monotonous routine begins to please you. Suddenly, the lesson becomes memorable.

Black Bag shows up again, and again. Will he come again on Friday? You can’t wait to know, you have to be there, who cares about the class, you need to check! And slowly you realize that there is nothing to fear in that black figure: indeed, it is making you think about many things that you had not considered before. In a formative place, where students are formed as in molds, Black Bag flaunts an irreducible individuality. A paradoxical individuality, given that his dress makes him anonymous and invisible. Invisible, yes, but heavy as a boulder: everyone knows that he’s right there, behind them. What does he think? Is he judging us? Is he snickering? And what would happen if we all went around in a bag? Maybe we would start judging people for who they really are?

In short, the essence of Black Bag’s appearance is intrinsically poetic. The fact that the students learned to love him means only one thing for me: that the bizarre opens the door to enchantment, and it is impossible, after a first, understandable reticence, not to be fascinated by it.