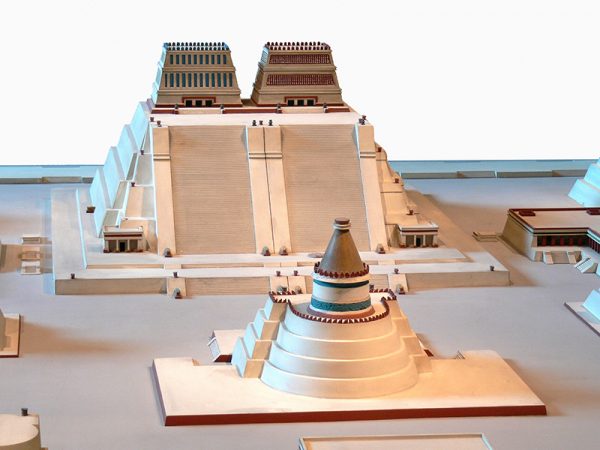 The Templo Mayor, built between 1337 and 1487, was the political and religious heart of Tenochtitlán, the city-state in Valley of Mexico that became the capital of the Aztec empire starting from the 15th Century.
Since its remains were accidentally discovered in 1978, during the excavations for Mexico City’s subway, archeologists have unearthed close to 80 ceremonial buildings and an extraordinary number of manufacts from the Aztec (Mexica) civilization.

Among the most peculiar findings, there are some masks created from human skulls.
These masks are quite elaborate: the back of the skull was removed, probably in order to wear them or apply them to a headgear; the masks were colored with dye; flint blades and other decorations were inserted into the eye sockets and nostrils. 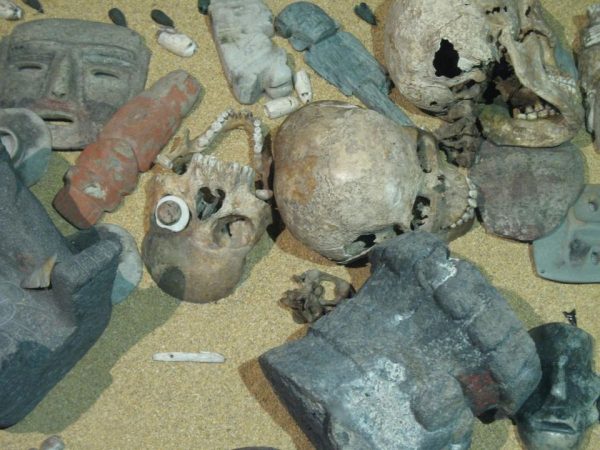 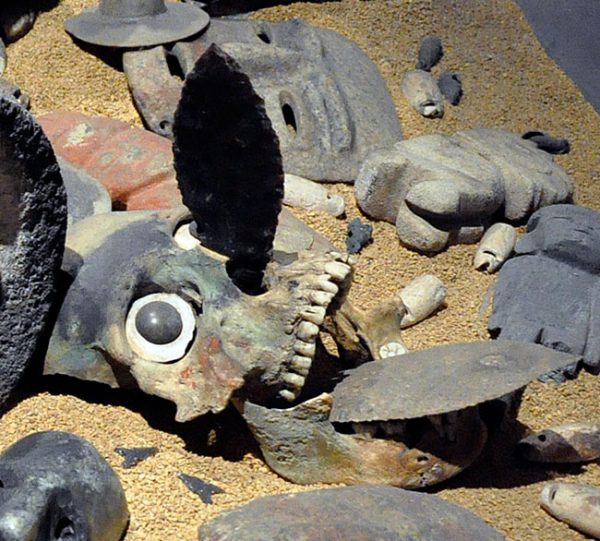 In 2016 a team of anthropologists from the University of Montana conducted an experimental research on eight of these masks, comparing them with twenty non-modified skulls found on the same site, in order to learn their sex, age at death, possible diseases and life styles. The results showed that the skull masks belonged to male individuals, 30 to 45-years old, with particularly good teeth, indicating above-average health. From the denture’s shape the anthropologists even inferred that these men came from faraway locations: Toluca Valley, Western Mexico, the Gulf coast and other Aztec towns in the Valley of Mexico. Therefore the skulls very likely belonged to prisoners of noble origins, excellently nourished and lacking any pathologies. 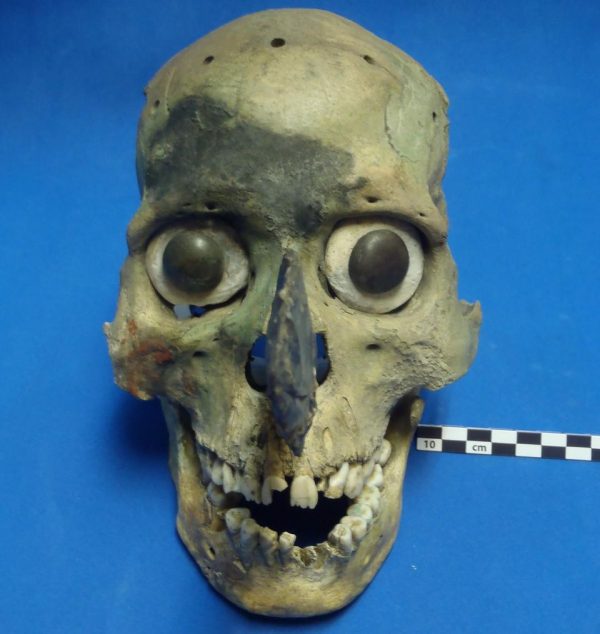 Human sacrifices at the Templo Mayor, for which the Aztecs are sadly known, were a spectacle that could entail different procedures: sometimes the victims were executed by beheading, sometimes through the extraction of the heart, or burned, or challenged to deathly combats.
The masks were produced from the bodies of sacrified warriors; wearing them must have had a highly symbolic value. 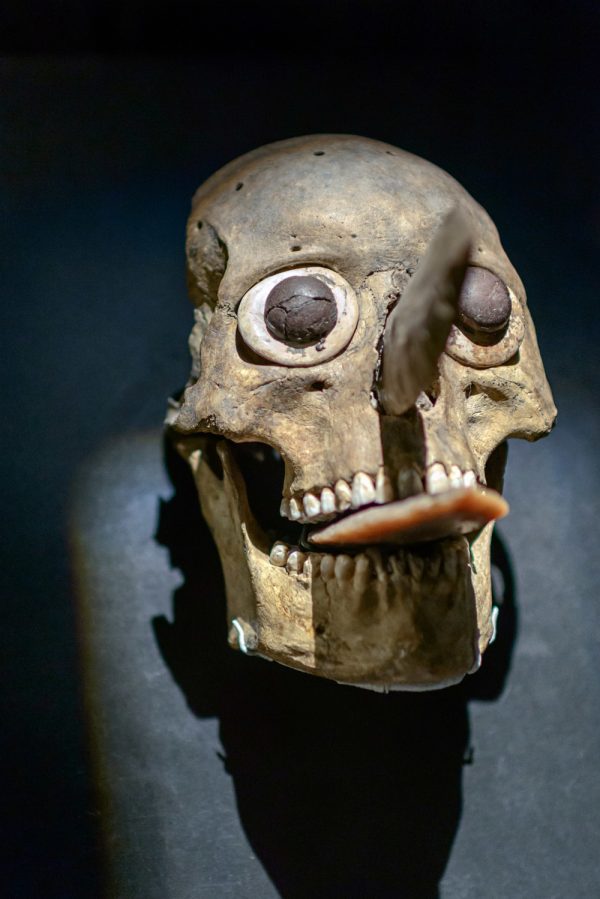 If these items survived the ravages of time, it’s because they’re made of bones. But there existed other, more unsettling disguises that have been inevitably lost: the masks made from the flayed skin of a sacrified enemy’s face.

The conquistador Bernal Díaz del Castillo described these skin masks as tanned to look “like glove leather” and said that they were worn during celebrations of military victories. Other masks, made of human skin, were displayed as offerings on temple altars, just as a number of the skull masks, reanimated by shell and stone eyeballs, noses, and tongues, were buried in offerings at the Templo Mayor. Because a defeated enemy’s former powers were believed to be embedded in his skin and bones, masks made of his relics not only transferred his powers to the new owner but could serve as worthy offerings to the god as well.

During a month-long ceremony called Tlacaxiphualiztli, “the Flaying of Men”, the skin of sacrified prisoners was peeled off and worn for twenty days to celebrate the war god Xipe Totec. The iconography portrays this god clothed in human skin. 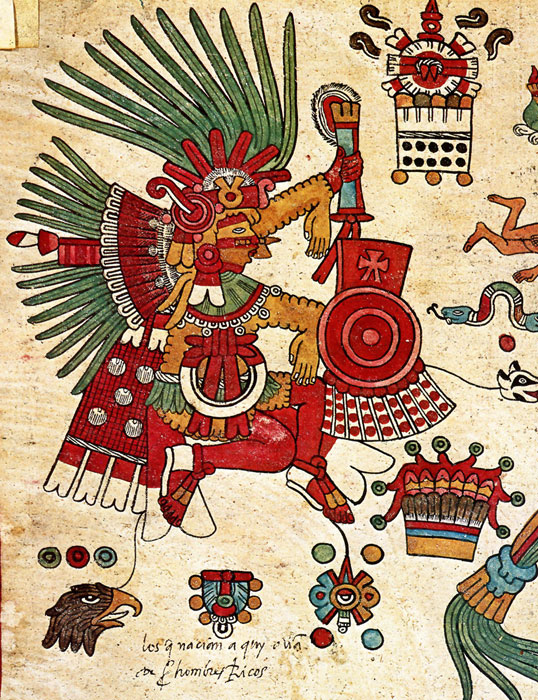 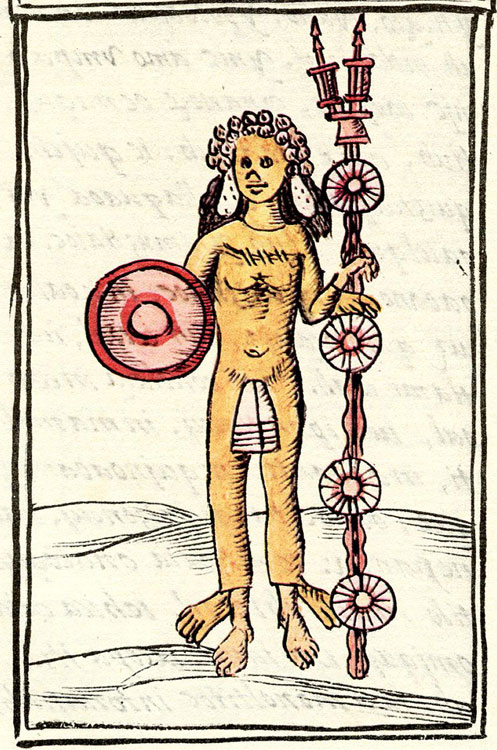 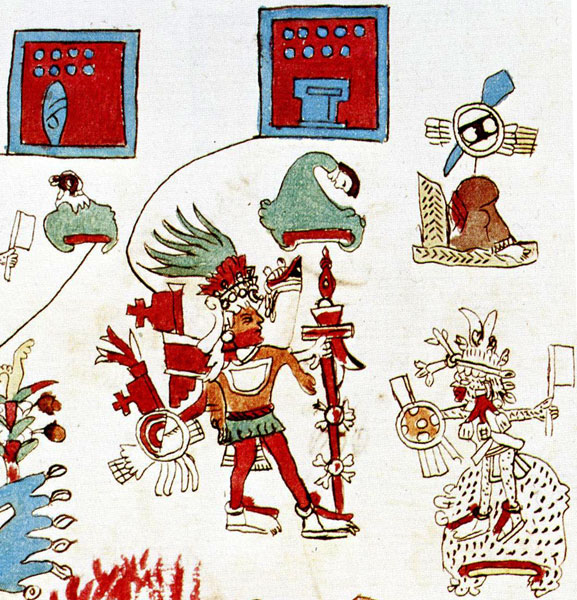 Such masks, wether made of bone or of skin, have a much deeper meaning than the ritual itself. They play an important role in establishing identity:

In Aztec society a warrior who killed his first captive was said to ‘assume another face.’ Regardless of whether this expression referred literally to a trophy mask or was simply a figure of speech, it implies that the youth’s new “face” represented a new social identity or status. Aztec masks therefore must be understood as revelations, or signs, of a person’s special status rather than as disguises […]. In Nahuatl, the language spoken by the Aztecs, the word for face, xayacatl, is the same word used to refer to something that covers the face.

Here is the interesting point: there’s not a single culture in the whole world which hasn’t elaborated its own masks, and they very rarely are simple disguises.
Their purpose is “the development of personality […], or more accurately, the development of the person [which] is a question of magical prestige“: the masks “are actually used among primitives in in totem ceremonies, for instance, as a means of enhancing or changing the personality” (Carl Gustav Jung, The Ego and the Uncoscious, 1928, p. 155).

Much in the same way, the decorated skulls of Templo Mayor are not so “exotic” as we might like to imagine. These manufacts are but a different declination of ideas we are quite familiar with — ideas that are at the very core of our own society. 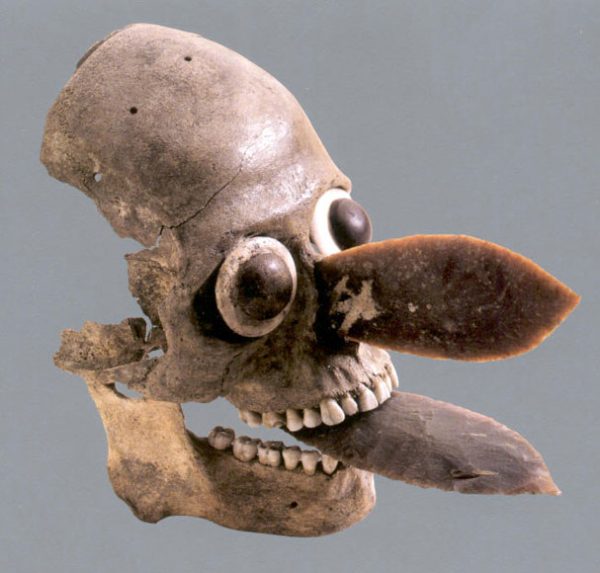 The relationship between the face (our identity and individuality) and the mask we wear, is a very ancient paradox. Just like for the Aztecs the term xayacatl could indicate both the mask and the face, for us too they are often indistinguishable.

The very word person comes from the Latin “per-sonare”, “to resound through”: it’s the voice of the actor behind his mask.
Greek tragedy was born between the 7th and 5th century BCE, a representation that essentialy a substitute for human sacrifices, as Réné Girard affirmed. One of the most recognized etimologies tells us that tragedy is actually the song of the scapgoat: an imitation of the ritual killing of the “internal stranger” on the altar, of the bloody spectacle with which society cleansed itself, and washed away its most impure, primiteve urges. Tragedy plays – which Athenians were obligated to attend by law, during Dionysus celebrations – substituted the ancestral violence of the sacrifice with its representation, and the scapegoat with the tragic hero.

Thus the theater, in the beginning, was conflict and catharsis. A duel between the Barbarian, who knows no language and acts through natural instinct, and the Citizen, the son of order and logos.
Theater, just like human sacrifice, created cultural identity; the Mask creates the person needed for the mise-en-scene of this identity, forming and regulating social interactions.

The human sacrifices of the ancient Greeks and of the Aztec both met the same need: cultural identity is born (or at least reinforced) by contrast with the adversary, offered and killed on the altar.
Reducing the enemy to a skull — as the Aztecs did with the tzompantli, the terrible racks used to exhibit dozens, maybe hundreds of sacrifice victims skulls — is a way of depriving him of his mask/face, of annihilating his identity. Here are the enemies, all alike, just bleached bones under the sun, with no individual quality whatsoever. 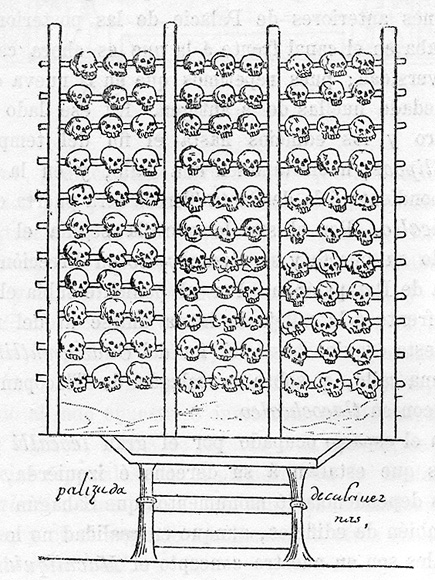 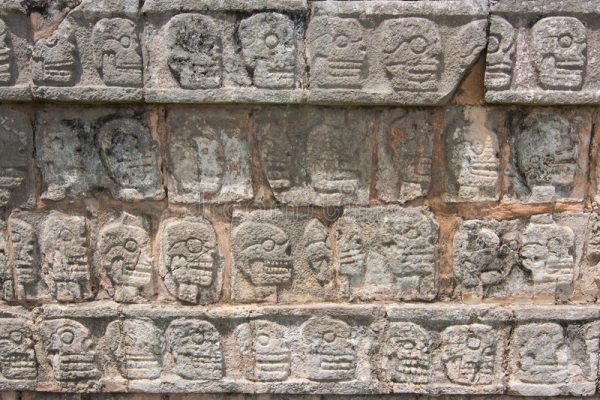 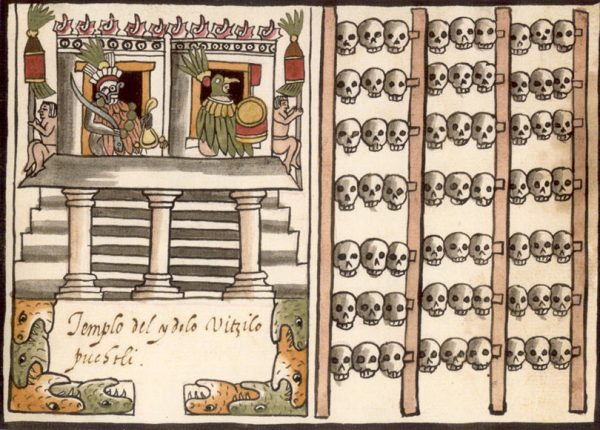 But turning these skulls into masks, or wearing the enemy’s skin, implies a tough work, and therefore means performing an even more conscious magical act: it serves the purpose of acquiring his strength and power, but also of reasserting that the person (and, by extension, society) only exists because of the Stranger it was able to defeat. 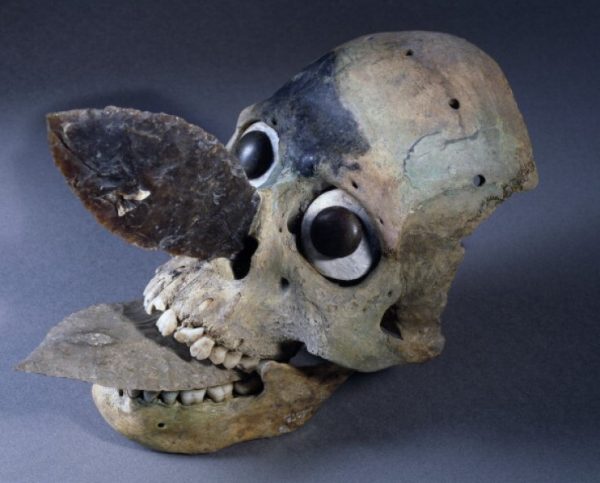