I see before me crosses not all alike,
but differently made by different peoples:
some hang a man head downwards,
some force a stick upwards through his groin,
some stretch out his arms on a forked gibbet.
I see cords, scourges,
and instruments of torture for each limb and each joint:
but I see Death also.
(Seneca, Consolatio ad Marciam, translated by Aubrey Stewart) 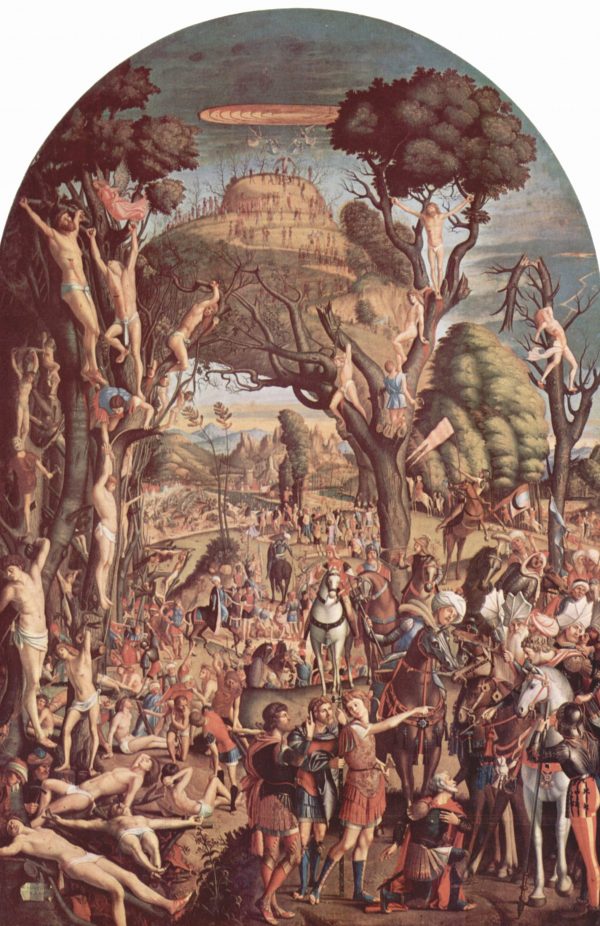 Easter is coming and, like every year, on Good Friday the believers will commemorate the Passion of Jesus, nailed to the wood on the Golgotha. Are we really sure that the traditional representation of Christ on the cross is realistic? After all, also in the endless variations of the punishment’s scene that art history has been producing for many centuries, there always seem to be some discrepancies: sometimes the nails are driven through the Redeemer’s hands and feet, sometimes through his wrists. This confusion goes back a long time ago, to the early, rough translations of the Gospel of John in which the Greek word for “limb” was misinterpreted as “hand“.

How exactly did the crucifixion take place? And what caused the death of the condemned person?
Both historian and scientists have tried to answer these questions. 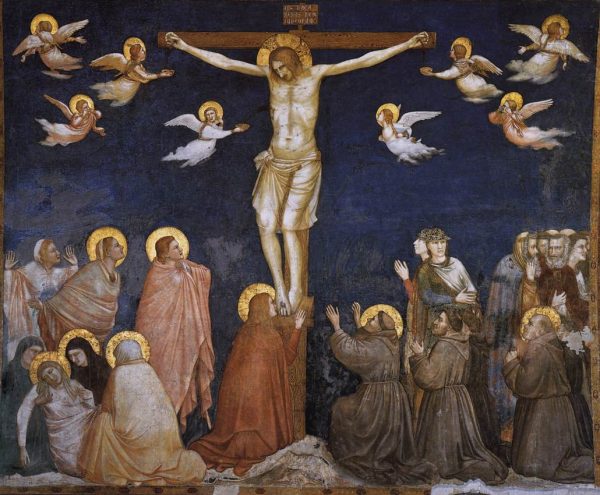 Coeval sources lead to the assumption that the word “crucifixion” in Latin and Greek referred to different methods of execution, such as the impalement and the tying on a simple tree, and most likely these methods varied according to time and place.
The only thing we know for sure is that it was the most humiliating, long and painful punishment provided for by the judicial system at that time (at least in the Mediterranean Basin). Cicero himself defined it as “the most cruel and sombre of all punishments“: the sufferings of the condemned person, hanged naked and exposed to public ridicule, were prolonged as much as possible by means of drugged drinks (myrrh and wine) or mixtures of water and vinegar which served to quench one’s thirst, stanch bleeding, revive and so on.
In rare cases death was accelerated. This happened to keep law and order, because some friend or relative of the condemned person had intervened, or according to specific local customs: the two methods most frequently used to put an end to the pain of the crucified were the spear thrust to the heart, that Jesus himself is traditionally believed to have received, and the so-called crucifragium, namely the fracture of the legs by means of hammers or sticks, in order to take every support away from the condemned person, who choked because of the hyperextension of the ribcage. 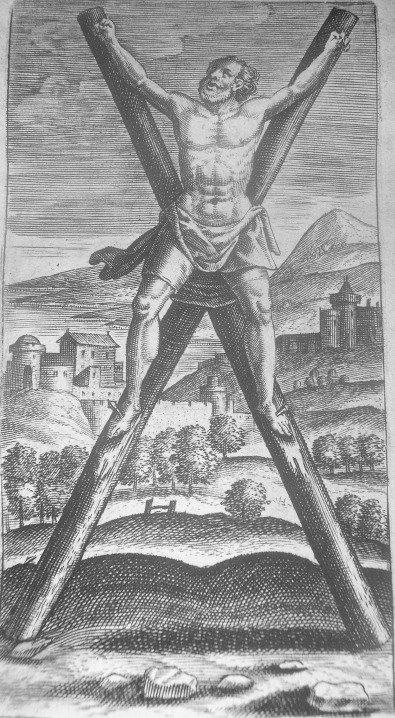 Three kinds of crosses were used by Romans for judicial punishments at the time of Jesus: the crux decussata, or St Andrew’s cross, consisted of two stakes fastened to form a X; the crux commissa, with stakes forming a T-shape; the crux immissa, the most famous cross, in which the horizontal beam (patibulum) was placed at two-thirds of the length of the vertical one (stipes). This arrangement allowed to put up the so-called titulus, a notice including the personal details of the condemned person, the charge and the sentence. 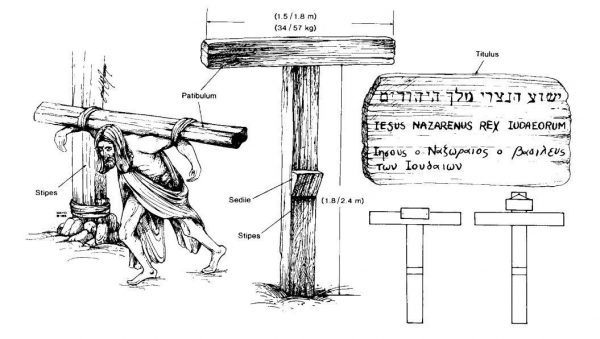 Another rather ascertained detail was the presence of a support half-way of the stipes, that was called sedile in Latin. It offered a support to the body of the condemned person, so that he/she could carry its weight without collapsing, thus preventing her/him from dying too fast. From sedile is apparently derived the phrase “to sit on the cross”. More complicated was the use of the suppedaneum, the support which the feet were nailed to and maybe rested on, often represented in paintings of the crucifixion but never mentioned in ancient manuscripts. 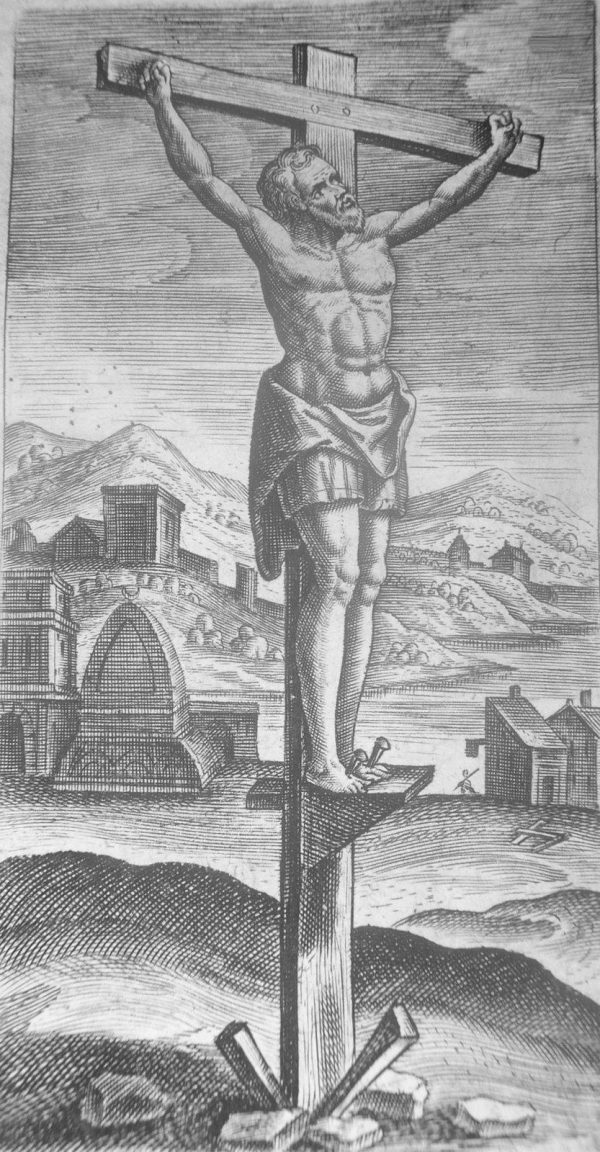 Although we now know many details about the cross itself, the methods of fastening were debated for a long time. The only skeleton ever found of a person condemned to crucifixion (discovered in 1968 around Jerusalem) had fractured legs and a nail into the outside of the ankle, which suggests that the feet were tied to the sides of the cross. But this doesn’t resolve the doubts that for many centuries have been tormenting theologians and believers. Where were the nails exactly driven? Through the hands or the wrists? Were the feet nailed to the front or to the sides of the stipes? Were the legs upright or bent at the knee? 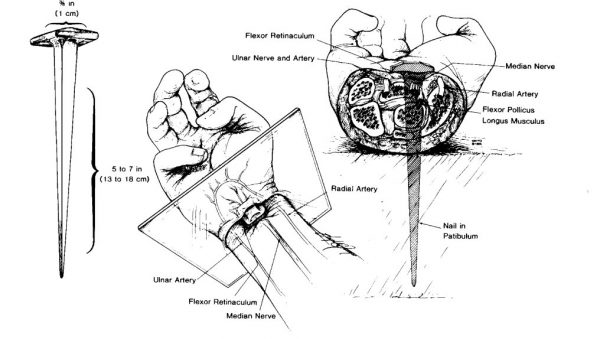 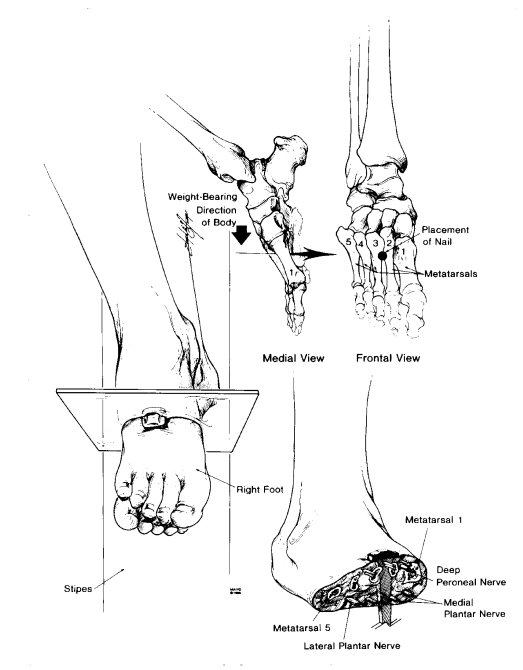 It may seem strange but this matter was long debated also in the field of science, especially towards the end of the nineteenth century. Medical researchers could rely on a continuous supplying of corpses, and amputated arms and legs, to sieve different hypothesis.

The theory that the nails were driven through the wrists, precisely between carpus and radius, had the advantage that this method probably allowed to slice the thumb’s median nerve and long flexor tendon, but without affecting arteries nor fracturing bones. On the other side, the idea that the Redeemer had been nailed through the wrists was considered – if not exactly heretic – at least risky by a part of Christian scientists: it certainly meant to disprove most of the traditional representations, but there was much more at stake. The actual theological issue concerned the stigmata. If Jesus had been nailed through the wrists, how could we explain the wounds that invariably appeared on the palms of people in the odour of sanctity? Maybe Our Lord Himself (that used to inflict stigmata as a punishment, but also as a sign of blissfulness) didn’t know where the nails had been driven? To accept the wrists theory meant to admit that the stigmatized person had been more or less unconsciously influenced by a wrong iconography, and that the origin of the sores was anything but ultramundane…

In order to repress these ignominious assumptions, around 1900, Marie Louis Adolphe Donnadieu, professor at the Catholic Faculty of Sciences in Lyon, decided to try once and for all a true crucifixion. He nailed a corpse to a wooden board, and even by a single hand.

According to professor Donnadieu, the cruel photograph of the dead hanging by an arm, published in his Le Saint Suaire de Turin devant la Science (1904), undoubtedly proved that Jesus’ hands could support his body on the cross. The other scientists should recant their theories once and for all; Donnadieu’s only regret was not a moral one, but concerned the fact that “the light in the photograph didn’t offer the best aesthetic conditions“.

Unfortunately his dramatic demonstration didn’t silence opponents, not even in the ranks of the Catholic. Thirty years later doctor Pierre Barbet, first surgeon at the Paris Saint Joseph Hospital, criticized Donnadieu’s experiment in his text La passion de Jésus Christ selon le chirurgien (1936): “The picture shows a pathetic body, small, bony and emaciated. […] The corpse that I had crucified, instead […] was absolutely fresh and fleshy“. In fact, also Barbet had started to nail corpses, but in a more serious and programmatic way than Donnadieu. 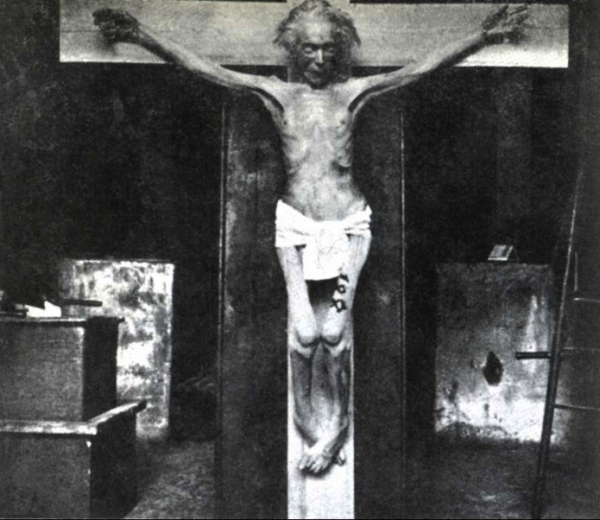 The meticulous research of Pierre Barbet undoubtedly includes him among the pioneers (they were few, to be pedantic) of medical studies about the Crucifixion, concerning in particular the wounds that marked the Shroud of Turin. Barbet came to the conclusion that the man represented on the Shroud had been nailed through the wrists and not the palms; that in the Shroud’s mark the thumb was missing because the median nerve had been cut off by the nail; that the man of the Shroud died of suffocation, when legs and arms were no more capable of supporting him. 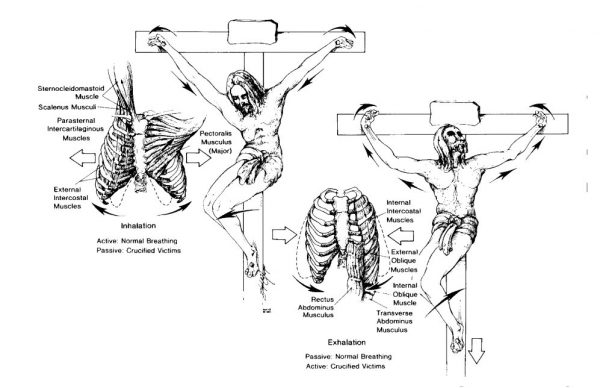 The last hypothesis, that was considered as the most reliable for many decades, was disproven by the last great expert in crucifixion, the famous American forensic pathologist and anthropologist Frederick Zugibe. He mainly studied between the end of the 1990s and the beginning of the 2000s. He didn’t have corpses to nail in his garage (as you can imagine, the vogue for crucifying corpses in order to investigate this kind of questions had definitely died out) and he carried out his researches thanks to a team of volunteers. Incidentally, to find these volunteers was easier than expected, because the members of a Christian congregation near his home queued up to play the role of the Saviour.
Zugibe built a handmade cross on which he tied his test subjects, constantly measuring their body functions – pressure, heartbeat, respiration, etcetera. He concluded that Jesus didn’t die of asphyxia, but of traumatic shock and hypovolemia. 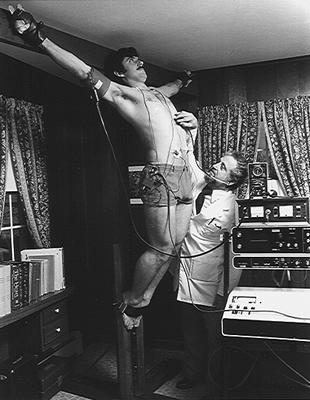 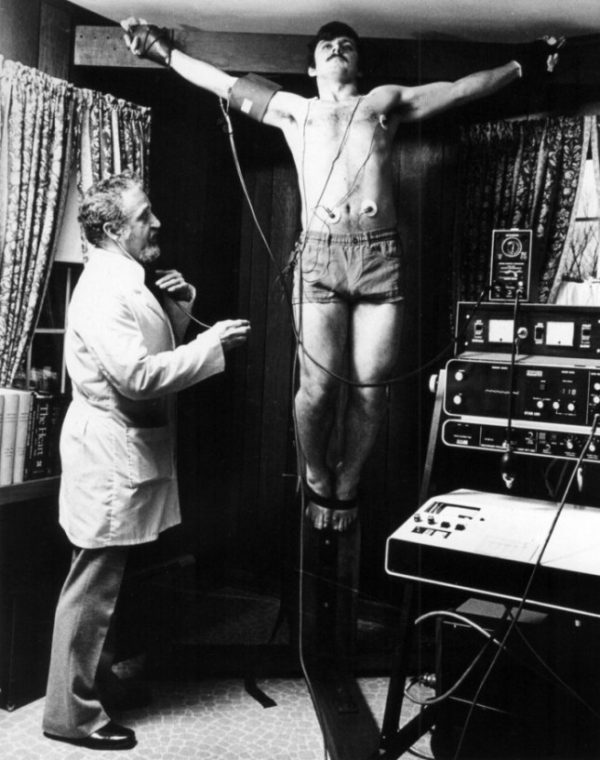 To complete the picture, other scholars assumed different causes of death for a crucified person: heart attack, acidosis, arrhythmia, pulmonary embolism, but also infections, dehydration, wounds caused by animals, or a combination of these factors. Whatever the ultimate cause, there was clearly only one way to get down off the cross.

Regarding the notorious nails and their entry wound, Zugibe believed that the upper part of the palm was perfectly capable to support the weight of the body, without causing bone fractures. He proved his theorem many times in the course of some dissections in the laboratory. 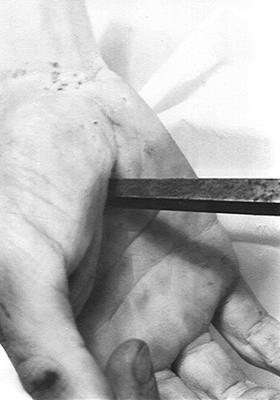 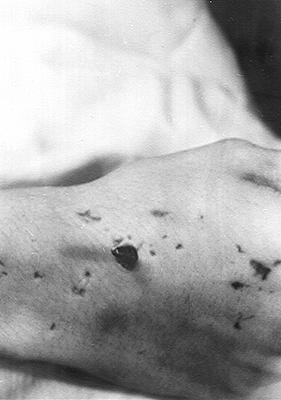 Then, after dozens of years, “an unbelievable and unexpected event, extremely meaningful, took place in the coroner’s office, confirming the existence of this passage [inside the hand]. A young woman had been brutally stabbed on her entire body. I found a defence wound on her hand, because she had raised it in the attempt to protect her face from the ferocious aggression. The examination of this wound on the hand proved that […] the blade had crossed the “Z” area and the point had gone out on the back of the wrist exactly as can be seen on the Shroud. A radiography of the area proved that there were no fractures at all!“. 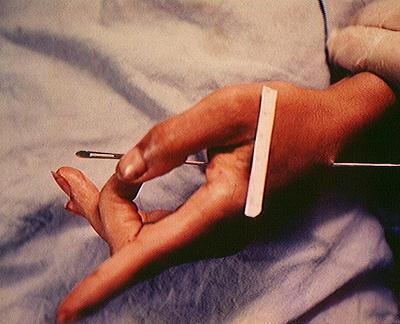 The fact that a pathologist gets excited to the point of using an exclamation mark, during a murder victim autopsy, while thinking about the correlations between a stab, the Shroud of Turin and the crucifixion of Jesus Christ… well, this is not surprising in the slightest. After all, at stake here are a thousand years of religious imagery. 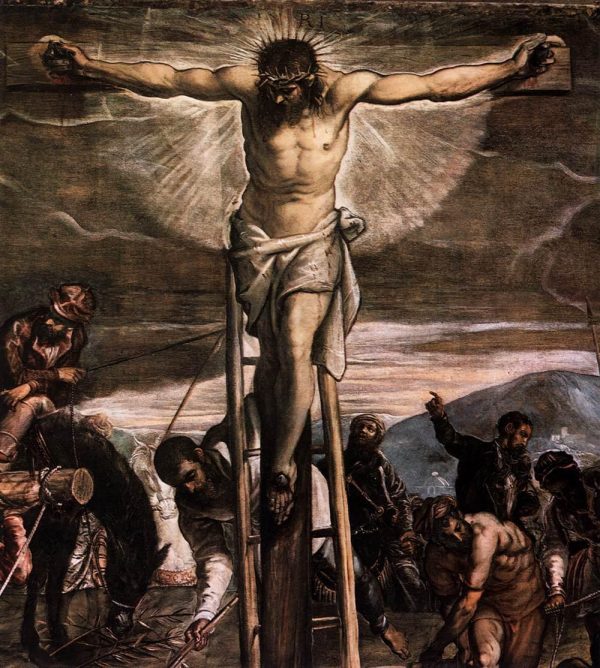 The English new edition of the text by Pierre Barbet is A Doctor at Calvary. The conclusions of Zugibe are summed up in his essay Pierre Barbet Revisited, that can be consulted online.