If by “mystery”, even in its etymological root, we mean anything closed, incomprehensible and hidden, then the castrum (castle), being a locked and fortified place, has always played the role of its perfect frame; it is the ideal setting for supernatural stories, a treasure chest of unspeakable and terrible deeds, a wonderful screen onto which our fears and desires can be projected.

This is certainly the case with the castle of Fumone, which appears to be inseparable from myth, from the enigmatic aura surrounding it, mostly on the account of its particularly dramatic history. 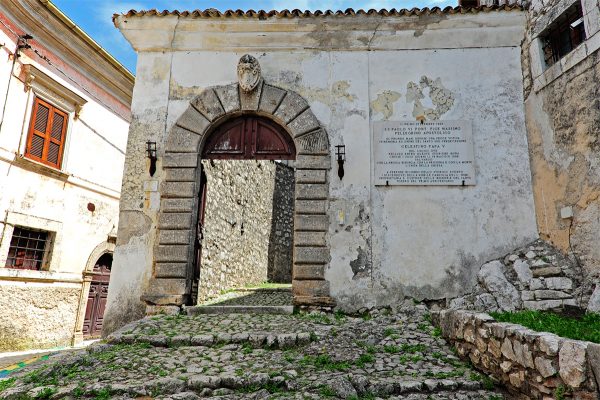 Right from its very name, this village shows a dark and most ominous legacy: Fumone, which means “great smoke”, refers to the advance of invaders.
Since it was annexed to the Papal States in XI Century, Fumone had a strategic outpost function, as it was designated to warn nearby villages of the presence of enemy armies; when they were spotted, a big fire was lit in the highest tower, called Arx Fumonis. This signal was then repeated by other cities, where similar pillars of thick smoke rose in the sky, until the alert came to Rome. “Cum Fumo fumat, tota campania tremat”: when Fumone is smoking, all the countryside trembles.
The castle, with its 14 towers, proved to be an impregnable military fortress, overruling the armies of Frederick Barbarossa and Henry VI, but the bloodiest part of its history has to do with its use as a prison by the State of the Church.
Fumone became sadly well-known both for its brutal detention conditions and for the illustrous guests who unwillingly entered its walls. Among others, notable prisoners were the antipope Gregory VIII in 1124 and, more than a century later, Pope Celestine V, guilty of the “big refusal”, that is abdicating the Papal throne. 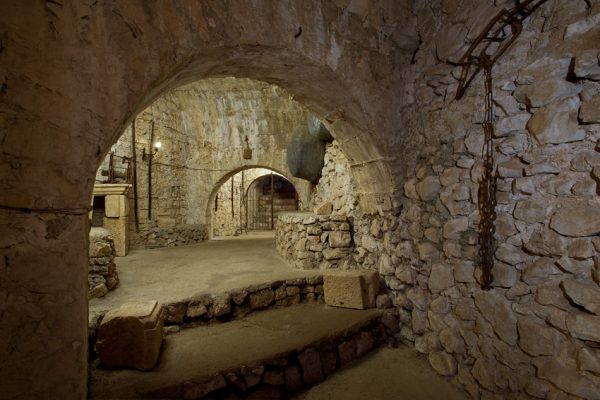 These two characters are already shrouded in legend.
Gregory VIII died incarcerated in Fumone, after he opposed the Popes Paschal II, Gelasius II and Callixtus II and was defeated by the last one. In a corridor inside the castle, a plaque commemorates the antipope, and the guides (as well as the official website) never forget to suggest that Gregory’s corpse could be walled-up behind the plaque, as his body was never found. Just the first of many thrills offered by the tour.
As for the gentle but inconvenient Celestine V, he probably died of an infected abscess, weakened by the hardship of detention, and the legend has it that a flaming cross appeared floating over his cell door the day before his death. On several websites it is reported that a recent study of Celestine’s skull showed a hole caused by a 4-inch nail, the unmistakable sign of a cruel execution ordered by his successor Boniface VIII; but when researching more carefully, it turns out this “recent” survey in fact refers to two different and not-so-modern investigations, conducted in 1313 and 1888, while a 2013 analysis proved that the hole was inflicted many years after the Saint’s death.
But, as I’ve said, when it comes to Fumone, myth permeates every inch of the castle, overriding reality. 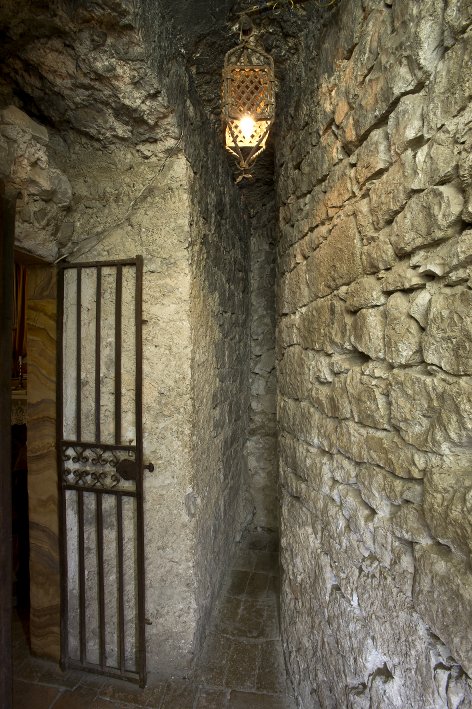 Another example is the infamous “Well of the Virgin”, located on the edge of a staircase.
From the castle website:

Upon arriving at the main floor, you will be directly in front of the “Well of the Virgin”.  This cruel and medieval method of punishment was used by the Vassals of Fumone when exercising the “Right of the Lord” an assumed legal right allowing the lord of a medieval estate to be the first to take the virginity of his serfs’ maiden daughters. If the girl was found not to be a virgin, she was thrown into the well. 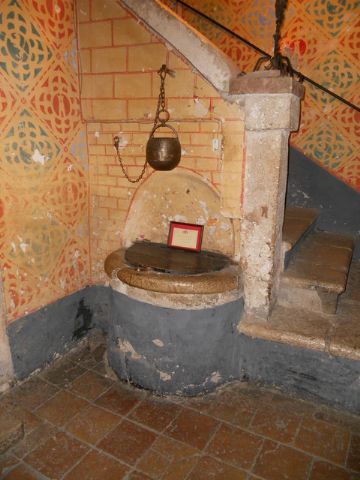 Several portals, otherwise trustworthy, add that the Well “was allegedly equipped with sharp blades“; and all seem to agree that the “Right of the Lord” (ius primae noctis) was a real and actual practice. Yet it should be clear, after decades of research, that this is just another legend, born during the passage from the Middle Ages to the modern era. Scholars have examined the legislations of Germanic monarchies, Longobards, Carolingians, Communes, Holy Roman Empire and later kingdoms, and found no trace of the elusive right. If something similar existed, as a maritagium, it was very likely a right over assets and not persons: the father of the bride had to pay a compensation to grant his daughter a dowry — basically, possessions and lands passed from father-in-law to son-in-law at the cost of a fee to the local landlord.
But again, why asking what’s real, when the idea of a well where young victims were thrown is so morbidly alluring?

I would rather specify at this point that I have no interest in debunking the information reported on the castle’s website, nor on other sites. Legends exist since time immemorial, and if they survive it means they are effective, important, even necessary narratives. I am willing to maintain both a disenchanted and amazed look, as I’m constantly fascinated by the power of stories, and this analysis only helps clarifying that we are dealing, indeed, with legends.
But let’s go back to visiting the castle.

Perhaps the most bizarre curiosity in the whole manor house is a small piece of wooden furniture in the archive room.
In this room ancient books and documents are kept, and nothing can prepare the visitor for the surprise when the unremarkable cabinet is opened: inside, in a crystal display case, lies the embalmed body of a child, surrounded by his favorite toys. The lower door shows the dead boy’s wardrobe. 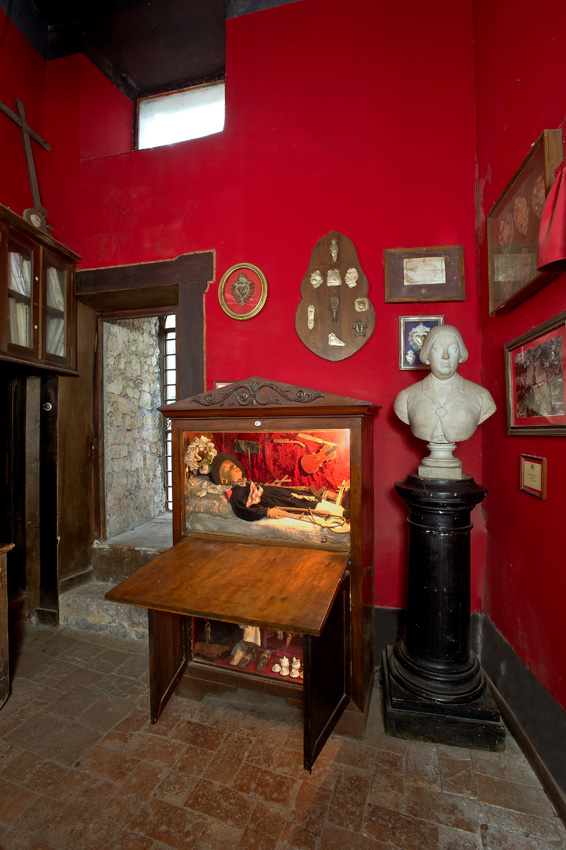 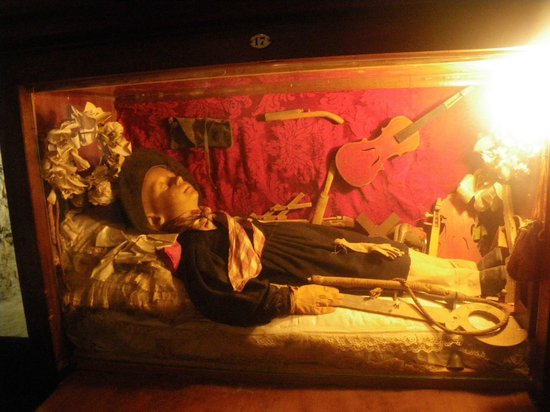 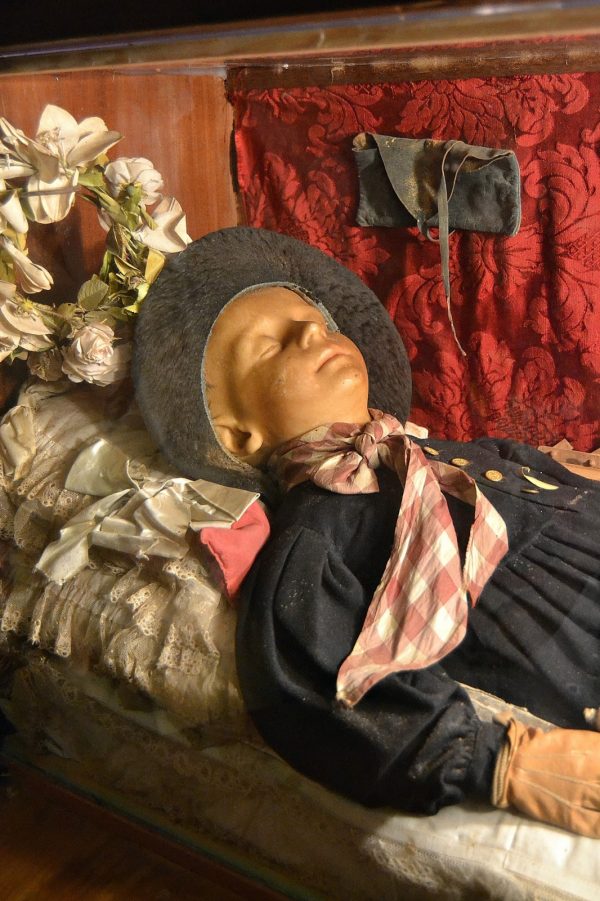 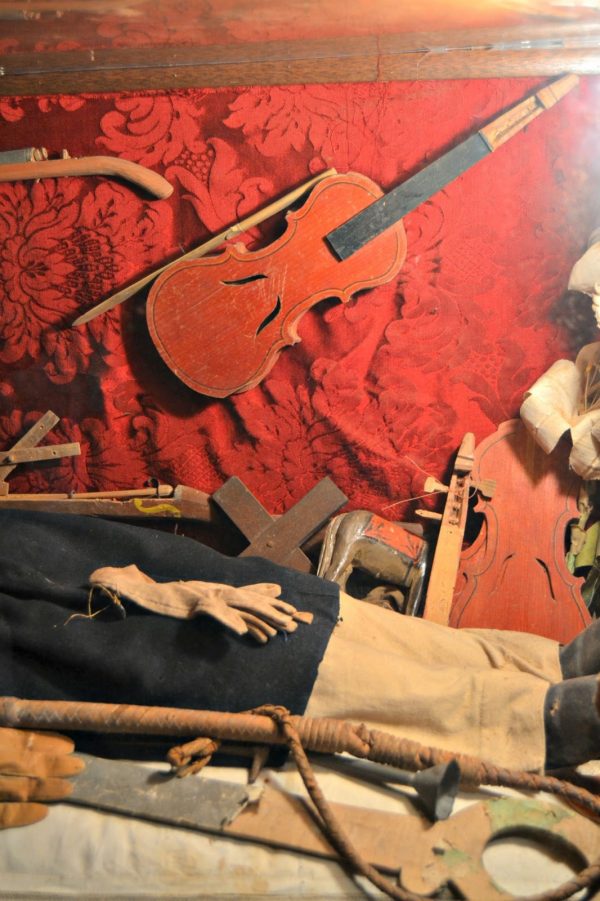 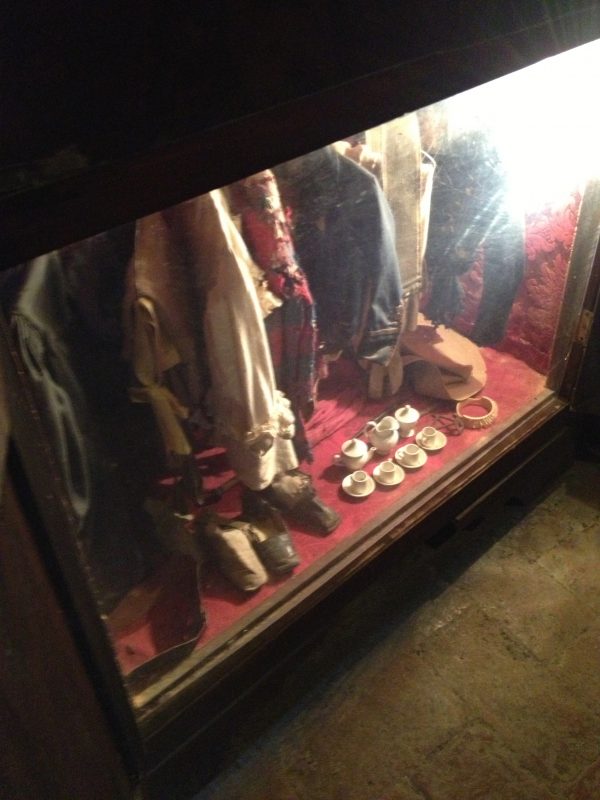 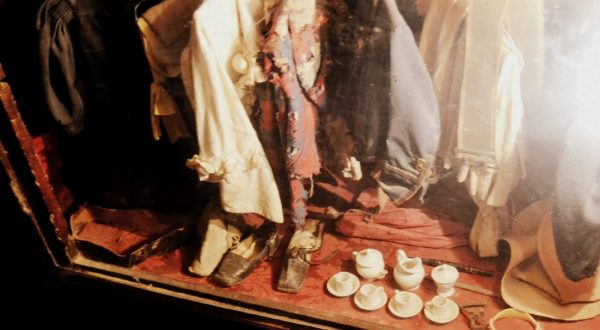 The somber story is that of “Little Marquis” Francesco Longhi, the eight and last child of Marchioness Emilia Caetani Longhi, and brother of seven sisters. According to the legend, his sisters did not look kindly upon this untimely heir, and proceded to poison him or bring him to a slow demise by secretly putting glass shreds in his food. The kid started feeling excruciating pains in the stomach and died shortly after, leaving his mother in the utmost desperation. Blinded by the suffering, the Marchioness called a painter to remove any sign of happiness from the family portraits, had the little boy embalmed and went on dressing him, undressing him, speaking to him and crying on his deathbed until her own death. 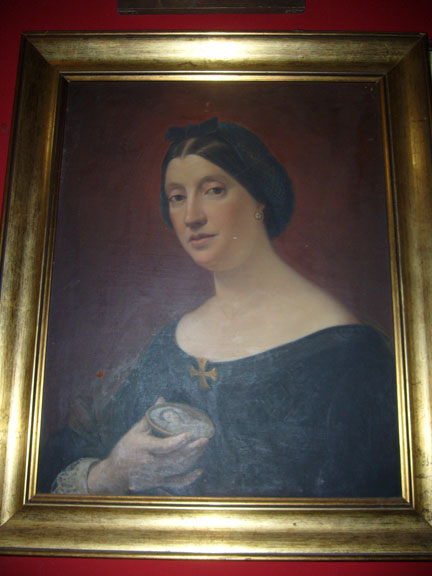 This tragic tale could not go without some supernatural twist. So here comes the Marchioness’ ghost, now and then seen crying inside the castle, and even the child’s ghost, who apparently enjoys playing around and moving objects in the fortress’ large rooms.

A place like Fumone seems to function as a catalyst for funereal mysteries, and represents the quintessence of our craving for the paranormal. It is no cause for indignation if this has become part of the castle’s marketing and communication strategies, as it is ever more difficult in Italy to promote the incredible richness of our own heritage. And in the end people come for the ghosts, and leave having learned a bit of history.
We would rather ask: why do we so viscerally love ghost stories, tales of concealed bodies and secret atrocities?

Fabio Camilletti, in his brilliant introduction to the anthology Fantasmagoriana, writes about Étienne-Gaspard Robert, known by the stage name of Robertson, one of the first impresarios to use a magic lantern in an astounding sound & light show. At the end of his performance he used to remind the audience of their final destiny, as a skeleton suddenly appeared out of nowhere. 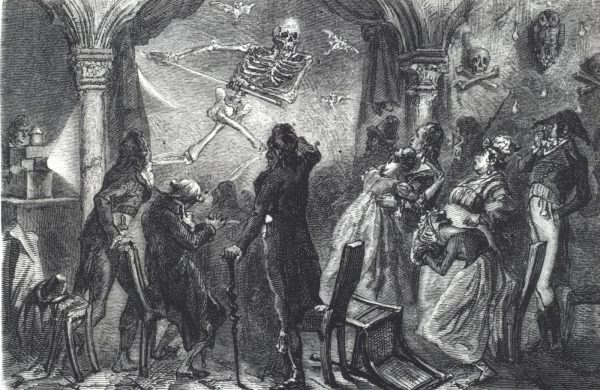 Camilletti compares this gimmick to the idea that, ultimately, we ourselves are ghosts:

Robertson said something similar, before turning the projector back on and showing a skeleton standing on a pedestal: this is you, this is the fate that awaits you. Thus telling ghost stories, as paradoxical as it may seem, is also a way to come to terms with the fear of death, forgetting — in the enchanted space created by the narration, or by the magic lantern — our ephemeral and fleeting nature.

Whether this is the real motivation behind the success of  spook stories, or it’s maybe the opposite — a more mundane denial of impermanence which finds relief in the idea of leaving a trace after death (better to come back as a ghost than not coming back at all) — it is unquestionably an extremely powerful symbolic projection. So much so that in time it becomes stratified and lingers over certain places like a shadow, making them elusive and almost imaginary. The same goes for macabre tales of torture and murder, which by turning the ultimate terror into a narrative may help metabolyzing it.

The Longhi-De Paolis castle is still shrouded in a thick smoke: no longer coming from the highest tower, it is now the smoke of myth, the multitude of legends woven over history’s ancient skin. It would be hard, perhaps even fruitless in a place like this, to persist in discerning truth from symbolic construction, facts fom interpretations, reality from fantasy.
Fumone remains an “invisible” castle that Calvino would have certainly liked, a fortification which is more a mental representation than a tangible location, the haven of the dreamer seeking comfort (because yes, they do offer comfort) in cruel fables. 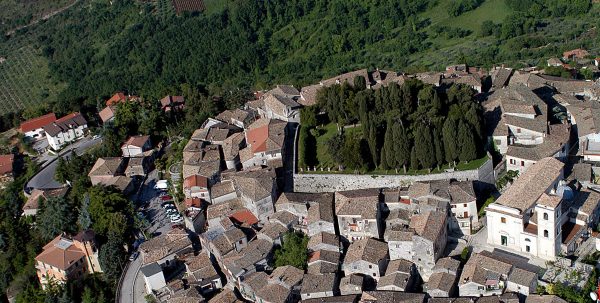 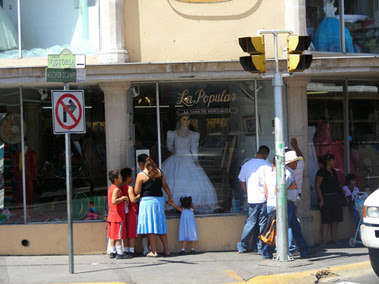 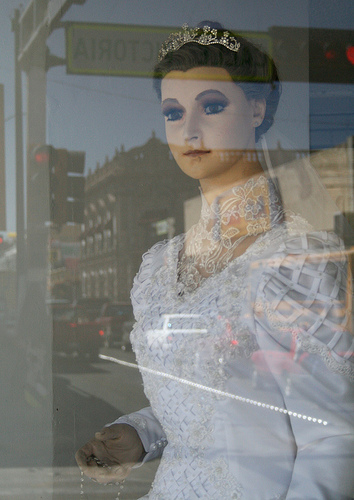 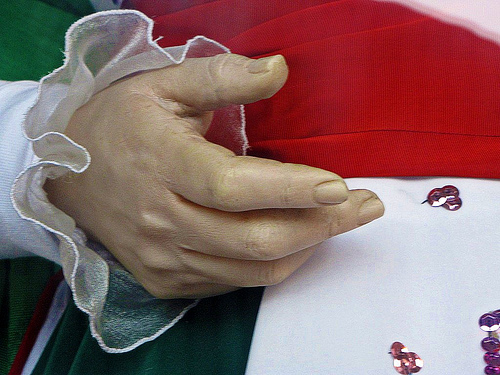 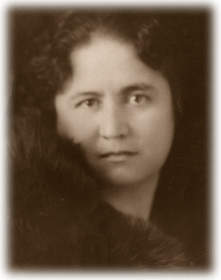 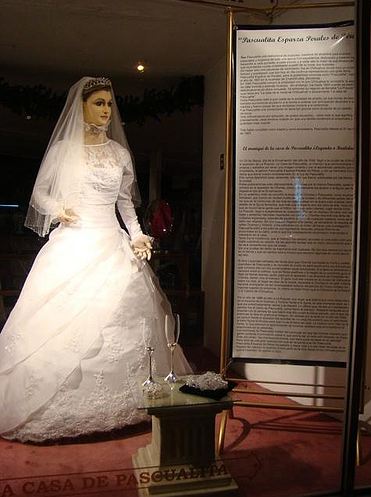 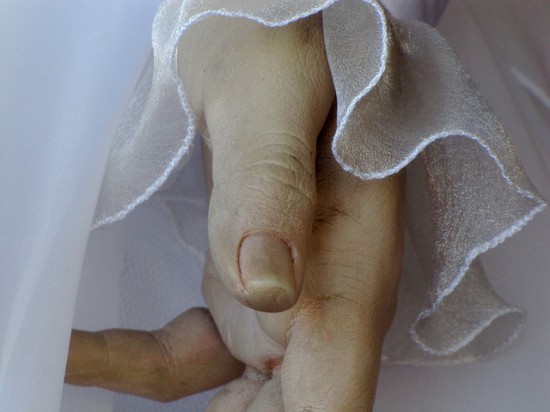 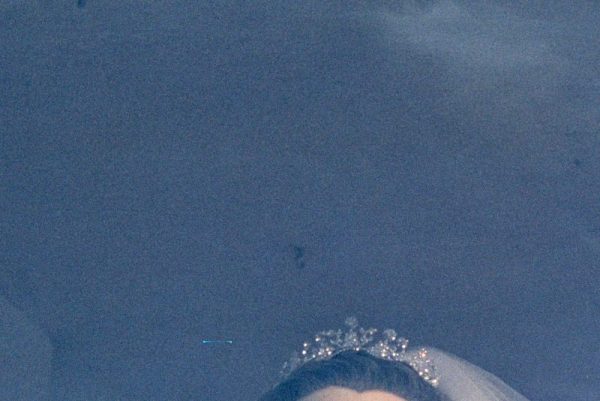