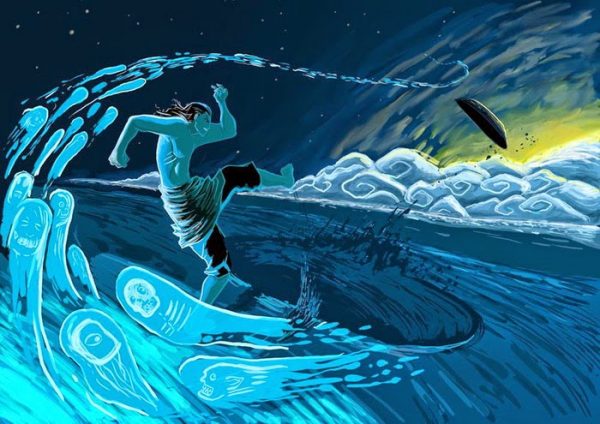 There were once two animals: a dog called Tumang, and a female boar named Celeng Wayungyang. They weren’t ordinary animals, but two deities transformed into beasts because of a sin they had committed long before.
One day, in the jungle, the sow-goddess drank the urine of a king who was hunting nearby and got pregnant; being a supernatural creature, she gave birth to her daughter within a few hours. The king, who was still in the jungle, heard the baby cry, and when he found her, he adopted her.
The little girl, called Dayang Sumbi, grew up at the palace and became a skilful weaver, a beautiful girl courted by many princes and noblemen.
One day, while she was spinning on the terrace, her loom fell down to the courtyard and since, being a princess, she could not put her feet on the ground to go and get it, Dayang Sumbi promised aloud that she would marry anyone who would bring it back to her. To her great disconcert, it was Tumang the dog the one who granted her wish, and she was obliged to marry him, unaware that he was actually a demigod. As soon as the king found out about the outrageous union between his daughter and a dog, he disowned her and banished her from the palace.
The couple went to live in a hut in the jungle, where Dayang Sumbi soon discovered that on full moon nights Tumang returned to his original appearance, turning into a young and wonderful lover; together they conceived a son, and they called him Sangkuriang.

When Sangkuriang was ten years old, his mother asked him to find a deer’s liver, for which she had a taste. So the boy went hunting in the jungle with his loyal dog Tumang (he didn’t know the dog was his father).
In the forest there was no sign of deer, but the two of them bumped into a beautiful female boar, and Sangkuriang thought that maybe her liver would do anyway. However, when he tried to kill the beast, Tumang the dog – having realized it was the goddess, which means Sangkuriang’s grandmother – diverted the bow and made him miss the target. Sangkuriang was furious and aimed his arrows at Tumang, killing him. Then he brought the dog’s liver to his mother, who cooked it believing it was wild game. As soon as she discovered the trick, though, poor Dayang Sumbi flared up, realizing that she had just eaten her husband’s liver; therefore she hit her son on the head with a ladle, and the blow was so severe that the boy completely lost his memory, and ran away into the forest, terrified.

Twelve long years passed.
Sangkuriang had become a handsome, strong and attractive young man. He didn’t remember anything at all about his mother, so when one day he accidentally met her – being the daughter of a goddess, she was still young and beautiful – he fell in love with her. They decided to get married, until one day Dayang Sumbi, while she was combing her fiancé, noticed on his head the scar left by the ladle and realized Sangkurian was her son.
She tried to convince him to break off the engagement but the young man, still a victim of amnesia, didn’t believe her and insisted that the wedding should be celebrated.

Then Dayang Sumbi devised a trick, an impossible proof of love. She told Sangkuriang she would marry him only if he managed to fill the entire valley with water: furthermore, still before the cock crowed, he should build a boat so that the two of them could sail together on the newly formed lake. The woman was sure that this was going to be an impossible task.
But, to her great surprise, Sangkuriang invoked the help of heavenly spirits and made the riverbanks collapse, filling the valley with water: he had managed to create a lake!
Then he cut down a huge tree and started to carve a boat.
Dayang Sumbi realized that her son was going to succeed in the challenge, so she feverishly started to weave huge red veils; she too prayed the heavenly creatures, and they spread the big veils along the horizon. The cocks, deceived, thought that dawn had already come and began to crow. Deceived, Sangkuriang flared up and kicked the unfinished boat upside down, which turned into an enormous mountain. The splinters formed other mountaintops around the first one. 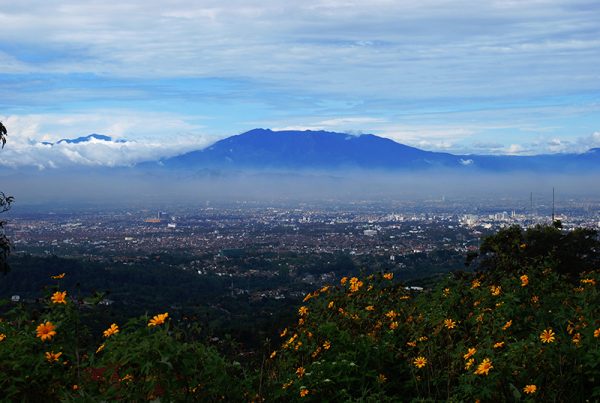 Mount Tangkuban Perahu, its profile reminiscent of a capsized boat.

This very old legend is still told nowadays by the Sundanese people of the Island of Java, and it sounds surprising not only because of its resemblance with the story of Oedipus.
This myth actually explains the creation of the Bandung basin, of Mount Tangkuban Parahu (which literally means “capsized boat”) and of the mountains nearby. But Lake Bandung, described in the legend, is dried out since no less than 16,000 years and the mountains took shape even earlier, because of a series of volcanic eruptions.
Archaeologists and anthropologists are positive that in the colourful legend of Sankguriang and of the challenges his mother threw down at him to avoid the incestuous relationship there is a kernel of historical truth: orally handed down through generations, it seems to bear the ancestral memory of the lake which disappeared thousands of years ago and of the seismic events which gave rise to the mountain range.
On the base of this myth, scholars have therefore dated the settlement of the Sundanese people in this geographical area to approximately 50,000 years ago.