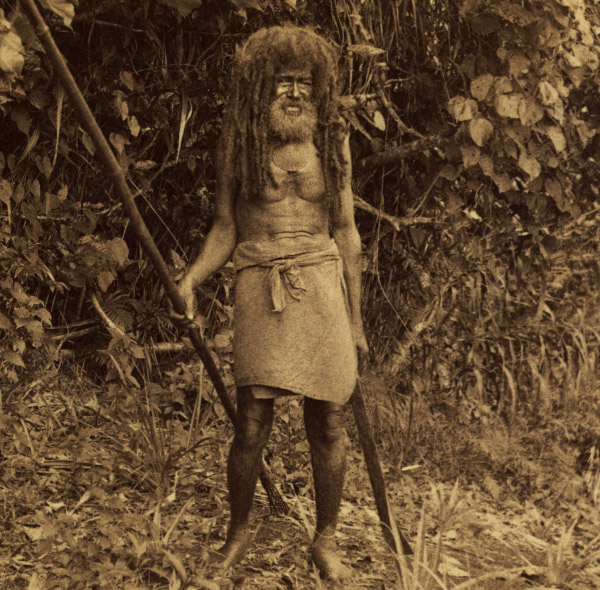 Let’s go back to a topic we discussed several times on these pages: the relationship of the Western world with  “primitive” tribes.
This will be a double post. In this first part we shall examine a 19th-century tale, and in the second an exotic journey that took place this very year.
Two perspectives very much apart in time and nonetheless marked by an element of continuity: Western obsession for the “savages” and for cannibalism.

I must start by saying that both articles owe a great deal to two followers and friends of Bizzarro Bazar: in the first case I have to thank Giulio, of Mala Tempora Studio, who passed on to me the story we will examine in this post; in the second case, my thanks go to Marco, the crazy guy who made that exotic journey.

So let’s begin with the extraordinary gem discovered by Giulio.
The #28 issue of Giornale Illustrato dei Viaggi (1923, published by Sonzogno) boasts one of the most incredible covers ever. It’s got it all: shipwrecks, cannibals, fetuses in formaldehyde and anatomical preparations. 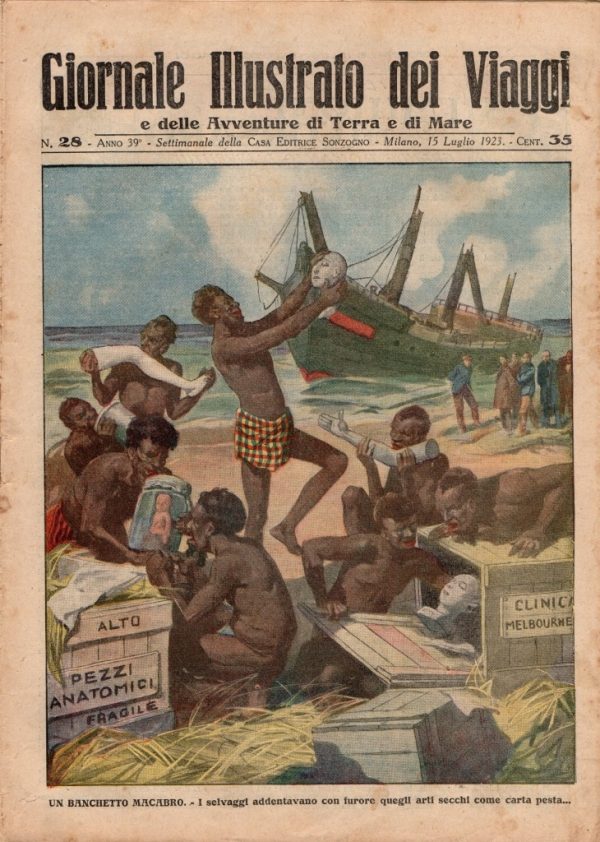 The gruesome episode is described in detail in the magazine. This is the ending of the short story:

What is left for me to add, gentlemen — continued Dr. Stephenson — goes beyond the limits of the unlikely. The three huge chests, containing the anatomical pieces, were opened in the blink of an eye, and the contents appeared in the eyes of the marauders, who certainly did not expect such a spectacle. They believed it to be our own food supply, and that we, sharing their taste for human flesh, had jealously hidden this treasure.
You know that anatomical pieces are prepared to produce a complete illusion.
What followed was more than a plunder, it was a true cannibalistic orgy. They furiously tore apart those pieces, which were dry like papier-mâché and no longer having the appearance of flesh. Eager to satisfy their monstrous tastes as soon as possible, they lit half a dozen braziers, on which they soon placed the whole pieces, staring at them with a mix of jealousy and admiration for the skillful butcher who had prepared them.
Under the influence of heat, this unusual roast softened somehow, but the injected fluids melted down and dripped into some large mother-of-pearl shells that those skilled and far-sighted cooks had placed underneath.
I shall leave it to your imagination, to think what that sauce could taste like!
To top it all off, Ben’s corpse, which we had buried at the foot of a myrtle shrub, was brutally exhumed, and cut into pieces in a few minutes with stone knives and with rare skill.
We also owned half a dozen brains, and a complete set of fetuses, stored in 75° alcohol. A new discovery, which was accompanied by gorilla-like contortions. With great caution, almost religiously, they opened the enormous jars that contained them, and they drank the conservative liqueur with an incomparable gluttony. That infernal liquid, which must have burned their stomachs, brought their drunkenness to the highest level, and they swallowed like brandied oranges those unfortunate leftovers, which science alone has the right to study and mutilate without commiting profanation.
Happy and drunk, those abominable savages staggered, shouted loudly and beat their bellies in a deep state of bliss.
Finally they fell asleep like seals.
The next day, in the perfumed hour, when the morning sun rises from the greenery shaking his golden hair above the giant forest, the chirping of parrots woke those brutes. They stretched their limbs like satisfied dinner guests awaking from a peaceful sleep, and rose fresh and happy, scampering around like young kangaroos. If not for the presence of some macabre bones scattered across the place, no one would have suspected such a horrible feast had happened the previous day.
What a wonderful organ the Australian stomach must be! …
Faithful to their commitment, despite our fault, they led us to Ballaratre, where we arrived completely empty-handed.
The last words we heard from those unworthy children of nature were to warmly solicit a new shipment of “small whites in firewater”.
We did not deemed it appropriate to respond.
Three days later we were in Melbourne! 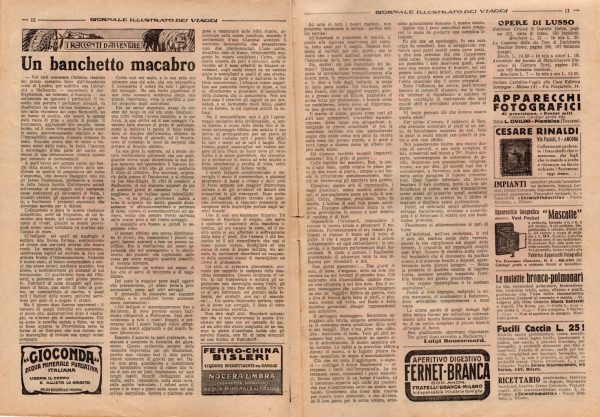 Now, a little background. The Giornale Illustrato dei Viaggi e delle Avventure di Terra e di Mare (‘Illustrated Journal of Travels and Adventures on Land and Sea’) was a weekly magazine founded by Edoardo Sonzogno and published in Italy since 1878. The magazine was clearly mimicking the Journal des Voyages et des Aventures de Terre et de Mer, founded the year before in Paris by Charles-Lucien Huard, as it also reproduced some of its original articles and reports.

Like its French counterpart, the Giornale Illustrato featured tales of geographic exploration and adventure fiction, and in its last years of publication it even presented sci-fi and horror short stories.
In 1931 the magazine was discontinued, and it merged with Il Mondo.

As for the 1923 cover, it was actually the copy of an illustration by Horace Castelli for the serialized fiction novel À Travers l’Australie: les dix millions de l’opossum rouge by Louis-Henri Boussenard, a picaresque tale of Australian adventures published in 1878 on the Journal des Voyages and then in 1881 on La Récréation. 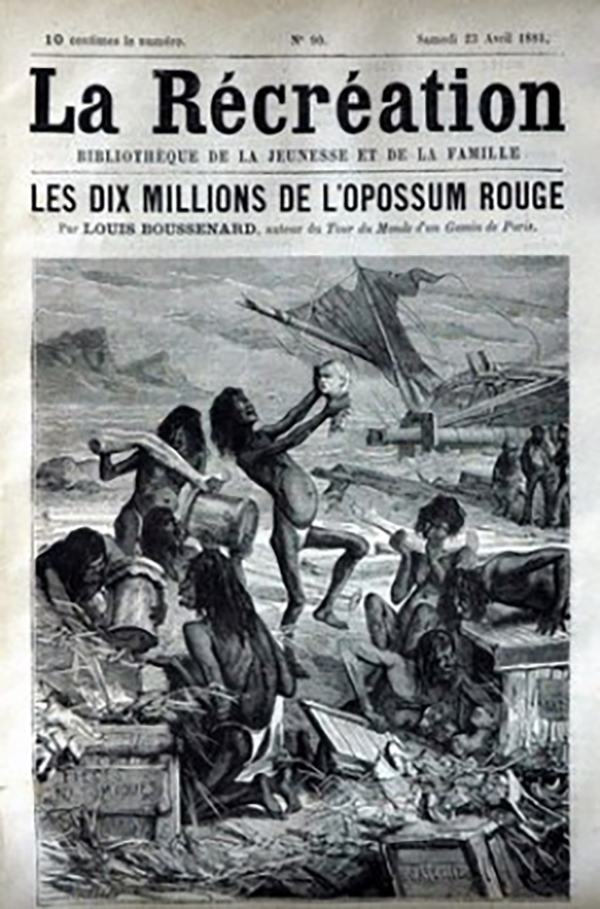 This inventive little episode, as we have seen, is centered on the expedient (which is not devoid of genius) of combining two classic 19th-century fixations: anatomy and cannibalism.
The anatomist was indeed a recurrent character in romantic literature (from the works of Scapigliati to naturalists), at a time when authors looked at the new positivist science, and anatomy in particular, with a mixture of exaltation and morbid interest. In this case the narrator is indeed a scientist, even if the “aseptic” patina of his academic report is soon forgotten to leave room for the more macabre and sensationalist tones.

The other obsession emerging here is the endless fascination for cannibalism and the myth of the “savage”. It is an obsession with a dual nature: first, it serves to highlight the superiority of Westerners, who have freed themselves from the “bestial” state.
The 19th-century explorer’s colonial arrogance is reflected in the contemptuous tone reserved for the indigenous people (‘abominable savages‘, ‘monstrous tastes‘, ‘brutes‘), often seasoned with animal comparisons (‘like seals‘, ‘gorilla-like‘, ‘like young kangaroos‘) and references to a pre-cultural state (‘those unworthy children of nature‘).
At the same time, however, this fixation is tinged with an ill-concealed envy for the freedom of customs shown by these “primitive” people. It’s no coincidence that these narratives insist so much on morbid tones, and that the portrayed “savages” are often nothing more than function characters, inserted in stereotyped situations — the perfect excuse for the writer (his hand trembling, of course, as he barely dares to proceed to the next horrible scene) to describe orgies, assorted violence and nudity. 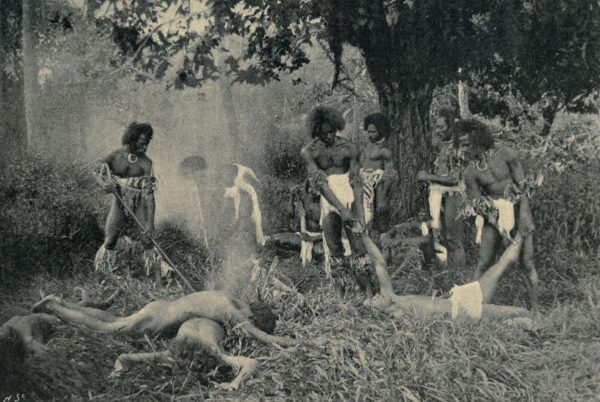 Upon reading these fantastic reports, one gets the impression of being confronted not so much with anthropophagy (which, far from being orgiastic, actually followed rigorous rituals, was often carried out within the tribe itself and was limited to the assumption of small parts of the body of a deceased relative as a sign of respect) but rather with a repressed impulse of breaking free from social norms.
As I argued when talking about severed heads — those macabre souvenirs that Westerners brought home from their explorations — the Savage is a screen on which we project the distorted image of what we want him to be.

But we must keep in mind that behind these tales of cannibalism there was also a strictly political motivation: they were meant to provide an ethical excuse for colonial expansionism.

Such stories were not just intended to thrill people back home; they also provided moral underpinning for the domination of the locals by western settlers. Cannibalism was an unnatural act, seemingly as far as possible from acceptable European behaviour. Tales of man-eating could therefore justify the annexing of foreign lands as well as the introduction of Christian morality into a country. […] The labelling of the rebels as hungry cannibals reduced their uprisings to a battle between civilisation and savagery […]. It made violent repression the authorities’ most likely response and necessitated a continuing colonial presence to ensure further outbreaks of man-eating were prevented.

We might think that the Western obsession for cannibalism and for uncontacted, “uncontaminated” tribes is a thing of the past, like the old topos of the explorer boiled alive in a pot, but that’s not really the case (see this other article).
Cannibals still thrive in comic books, horror films and more generally the collective imagination. 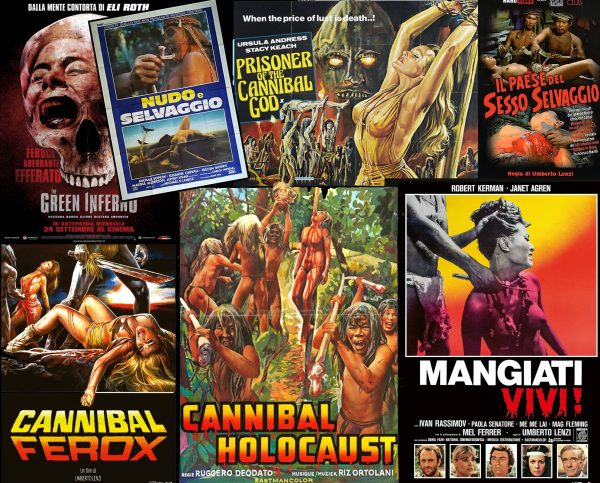 So much so, that some people are willing to spend considerable amounts of money and face a journey that’s all but safe and comfortable, just for the thrill of coming face to face with “real cannibals”.
But we will talk about this in detail in the second part of this post.