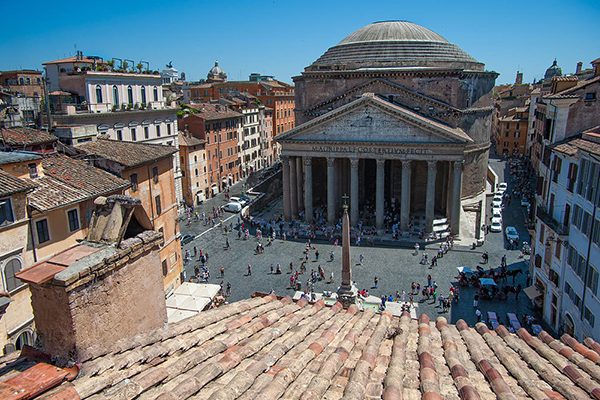 Among the seven deadly sins, there is one for which the inhabitants of Rome — both ancient and modern — have always been (in)famous: the sin of gluttony.

One of the Roman squares which for centuries was associated with food, groceries and the most varied delicacies was the “Piazza della Ritonna”, that is the square in front of the Pantheon.
Here in the past there were numerous delicatessens called “spizzicherie”, shops in which food was sold “in spizzico”, in small quantities. Eggs, anchovies, salt, but above all cheese and cured meats, for which the piazza was renowned. The pizzicagnoli didn’t sell their merchandise only in authorized delicatessens, but the whole square was regularly invaded and occupied by stalls, sheds, movable booths — in short, it was a sort of chaotic outdoor market. 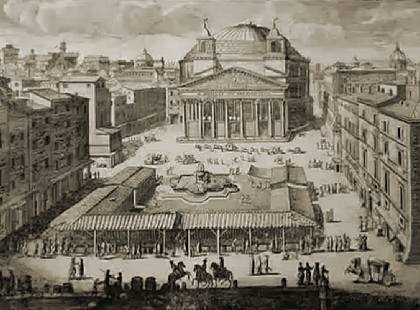 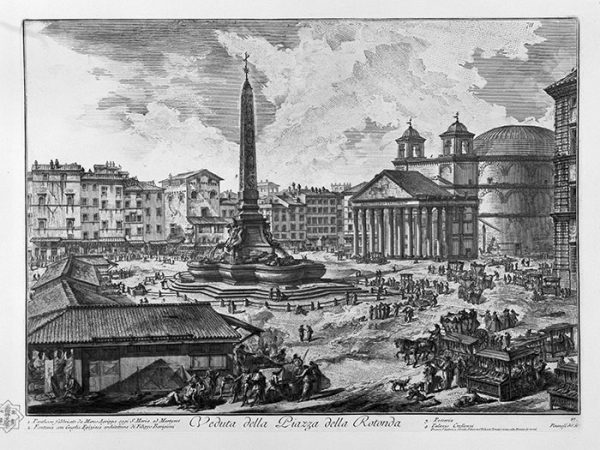 During Easter, the delicatessens would also set up baroque exhibitions, with spectacular lanscapes created with food in the attempt to impress the crowd with their opulence. In the square began a competition to build the most elaborate sculpture of cold cuts, sausages and cheeses.

Belli gave an account of these scenes in a 1833 poem (the translation for this and the following extracts in Roman dialect are in the notes):

De le pizzicarie che ttutte fanno
la su’ gran mostra pe ppascua dell’ova,
cuella de Bbiascio a la Ritonna è st’anno
la ppiú mmejjo de Roma che sse trova.
Colonne de casciotte, che ssaranno
scento a ddí ppoco, arreggeno un’arcova
ricamata a ssarcicce, e llí cce stanno
tanti animali d’una forma nova.
Fra ll’antri, in arto, sc’è un Mosè de strutto,
cor bastone per aria com’un sbirro,
in cima a una Montaggna de presciutto;
e ssott’a llui, pe stuzzicà la fame,
sc’è un Cristo e una Madonna de bbutirro
drent’a una bbella grotta de salame. <fn>”Among the delicatessens that make a great exhibition for Easter, the best one this year is Biagio’s, in Piazza della Rotonda. Columns of caciottas, a hundred of them to say the least, hold an arc decorated with sausages, and one can see a host of little animals coming in many shapes. Among others, above stands a Moses made of lard, holding his stick in the air like a policeman, on top of a mountain of ham; and below him, to whet your appetite, there are a Christ and a Madonna made of butter, inside a beautiful grotto of salami.”</fn>

Another more recent account comes from Giggi Zanazzo in 1908:

The tradition of food cornucopias continued until recent times. But not everyone loved those stalls and shops; in fact the authorities tried many times, starting from the 1400s and then cyclically over the centuries, to clear the square with various decrees and injunctions.

One of these episodes of restoration of the decorum is remembered on a commemorative plaque dating back to 1823 and displayed on the wall of the the building just opposite the Pantheon, at number 14 in Piazza della Rotonda:

POPE PIO VII IN THE XXIII YEAR OF HIS KINGDOM
BY MEANS OF AN OPPORTUNE DEMOLITION
CLAIMED FROM HIDEOUS UGLINESS
THE AREA IN FRONT OF THE PANTHEON OF M. AGRIPPA
OCCUPIED BY IGNOBLE TAVERNS AND
ORDERED THE VIEW BE LEFT FREE AND THE SPACE CLEAR

Of all the butchers working in this area, those coming from the city of Norcia had the reputation of being the most skilled, so much so that it was a common insult to wish the opponent would end up “castrated by a norcino [butcher from Norcia] at the Rotonda”. 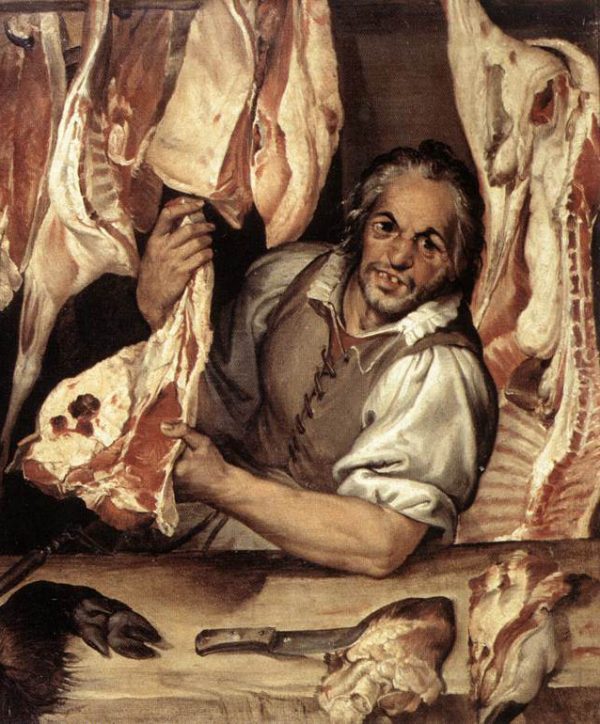 And in Piazza della Rotonda, in 1638, there were two butchers from Norcia, husband and wife, whose sausages were the best of all.
From all quarters of the city, people flocked to buy them: these sausages were even too sublime and delicious. 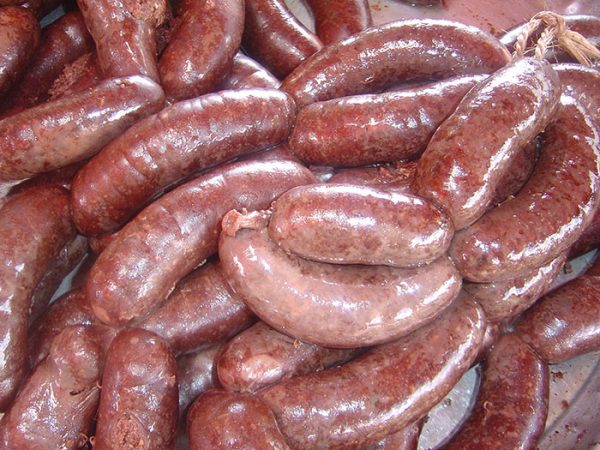 Thus the word began to spread that the butchers were hiding a secret. What did they put in their sausages to make them so tasty? And didn’t someone swear they saw some chubby, round-bodied customers enter the shop and never come out?

The rumor finally reached the ears of the Captain of Justice, who started an investigation; while searching the premises, the police actually found human bones in the basement of the butcher’s shop.
Pope Urban VIII, born Maffeo Vincenzo Barberini, sentenced the two butchers to be executed right in front of the Pantheon: they both were killed, slaughtered and quartered with an ax by another exquisite master in the art of butchery, the Pope’s official executioner. 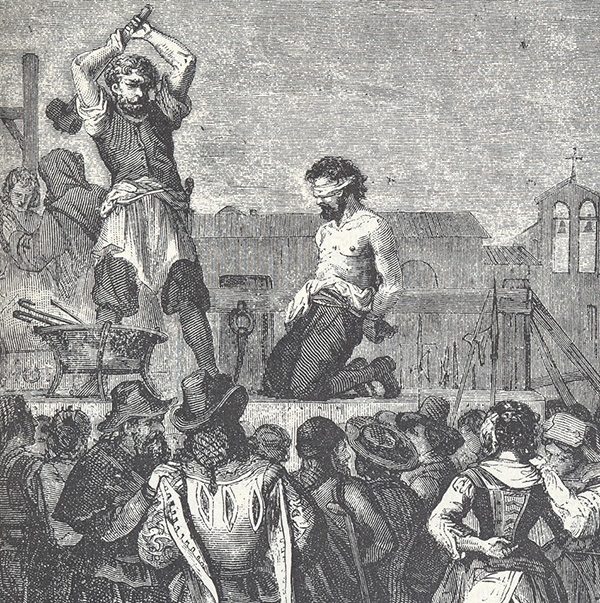 This story remained alive in the memory of the Romans. The population was so impressed by the crime, that it reappeared from time to time in vernacular poems until as late as 1905, for example in this poem entitled About the skeletons found at the Rotonna (M. D’Antoni, in Marforio, IV, 308 – 1 Luglio 1905):

Perchè mò ce sò certi amico caro,
che ar posto de’ la carne un po’ cristiana,
Ce schiaffeno er cavallo cor somaro!! <fn>”Wow those two butchers certainly had a lot of gall: they attacked men on hooks like a slaughtered beast. They ground and stuffed the human flesh, and those killers made sausages and cotechino, selling it as delicious meat. In ancient times, those who made sausages from human flesh were surely criminals: but they are even more so in the present. Because nowadays there are some, dear friend, that instead of using meat from a Christian, they mix horse meat with donkey meat!”</fn>

We should note at this point that the whole story may well be an urban legend.

The trope of the butcher who sells human flesh for pork is in fact a very ancient and rather widespread type of urban legend: the talented Sofia Lincos analyzed it with Giuseppe Stilo in an in-depth research divided into three parts (one, two and three, Italian only).

As I searched for clues in the judicial chronicles of the time, I managed to find a single reference to the story of the Pantehon’s cannibal butchers. It can be found in a 1883 book by David Silvagni, who quotes a manuscript dossier compiled by Abbot Benedetti:

These dossiers bear the title (given by the Abbott himself) of Ancient Facts Occurred in Rome, and they trace the history of the most famous misdeeds and the most famous executions, starting with the Cenci trial, of which there is another older but identical copy. And it is important to read these faithful accounts of atrocious deeds and even more atrocious executions, which the author narrates with the same calm and simplicity with which today a newspaper chronicler would announce a theater play. […] And so great is the restraint that the diarist shows, that there is not one word of indignation even for the bloodiest of all stories found in the manuscript. In fact, in a very calm and aunassuming style he recounts the “execution of justice commanded by Pope Urban VIII in the year 1638 and performed in the Piazza della Rotonda, in which two impious, wicked butchers who mixed pig meat with human flesh were killed, slaughtered and quartered”.

The abbot Benedetti lived at the end of the eighteenth century, more than a hundred years after the alleged incident. But as his prose is described to be austere and impartial, I am inclined to think that he was transcribing some sort of register, rather than reporting a simple rumor.

So did this story actually happen, is it a legend, or perhaps an exaggeration of real events? 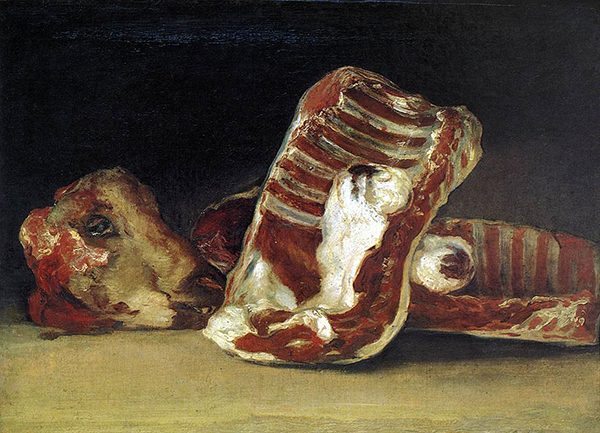 We don’t have a definitive answer. In any case, the history of the two butchers of the Pantheon represents an ironic warning not to indulge in gluttony, the capital sin of the Capital. A warning which, alas, was not given much attention: the people of Rome, known for being gourmands, would gladly turn down all enticements of Paradise for a good plate of carbonara.

[Note: This is the iconic Roman actress & cook Sora Lella. “Who gives a damn, let me eat!”]