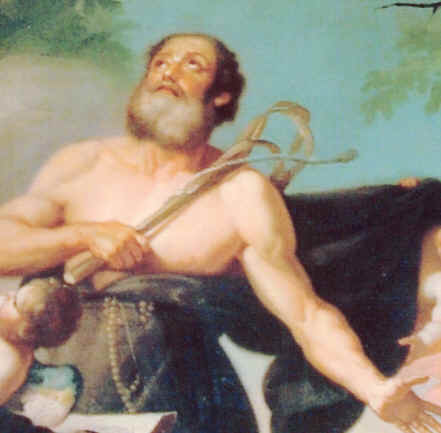 The body plays a fundamental role in Christian tradition.
Among the three great monotheistic religions, Christianity is indeed the only one to imply a God who became a man himself, thus granting an essential value to flesh and blood. According to Christian doctrine, it is told that resurrection will not be merely spiritual, but will also concern the physical body. Nevertheless, our flesh never got rid of its intrinsic duplicity: on the one hand, it lets the perfection of God’s work shine through – so much so that a holy body can “retain” within itself a part of the sanctity of the soul, whence the cult of relics – while on the other hand, of all human elements, it is the weakest and more susceptible to falling into temptation. The corruption of the flesh cannot be avoided except by mortifying sensuality or – in the most extreme cases – through the final sacrifice, more or less voluntary.

During the Middle Ages a distinction actually arose, ever sharper, between the carnal body and the body which will be resurrected at the end of times. As LeGoff writes, “the body of the Christian, dead or alive, lives in expectation of the body of glory it will take on, if it does not revel in the wretched physical body. The entire funeral ideology of Christianity revolves around the interplay between the wretched body and the glorious body, and is so organized as to wrest one from the other“.

That is why, in the lives of the saints, a disdainful denial of physicality and earthly life prevails. But, and that’s where things get interesting, there is a clear difference between male and female saints.
If the male saint usually accepts his martyrdom with courage and abnegation, in the vitae of female saints, female bodies are relentelssly destroyed or degraded, reaching superhuman extents in the hagiographic imagery.
As Elisabeth Roudinesco writes (in Our Dark Side: A History of Perversion, 2007):

When they were adopted by certain mystics, the great sacrificial rituals – from flagellation to the ingestion of unspeakable substances – became proof of their saintly exaltation. […] While the first duty of male saints was, following the Christian interpretation of the Book of Job, to annihilate any form of desire to fornicate, woman saints condemned themselves to a radical sterilization of their wombs, which became putrid, either by eating excrement or by exhibiting their tortured bodies.

Margaret Mary Alacoque, a French nun who lived in the Sevententh Century and was known for her mystic raptures, was “so sensitive that anything dirty made her heart jump“. But after Jesus had called her back to order, she could clean up the vomit of a sick woman by making it her food. She later absorbed the fecal matter of a woman with dysentery. By divine grace, what once would have disgusted her to death, now provoked in her the most intense visions of Christ, holding her with her mouth pressed against his wound: “If I had a thousand bodies, a thousand loves, a thousand lives, I would sacrifice them to be your slave“, she uttered.

According to some accounts, Catherine of Siena sucked the pus from the breasts of a woman with cancer, and stated that she had never eaten anything more delicious. Christ appeared to her, and reassuringly said: “My beloved, you have fought great battles for me and, with my help, you are still victorious. You have never been dearer or more agreeable to me […]. Not only have you scorned sensual pleasures; you have defeated nature by drinking a horrible beverage with joy and for the love of me. Well, as you have perfomed a supernatural act for me, I want to give you a supernatural liquor“. 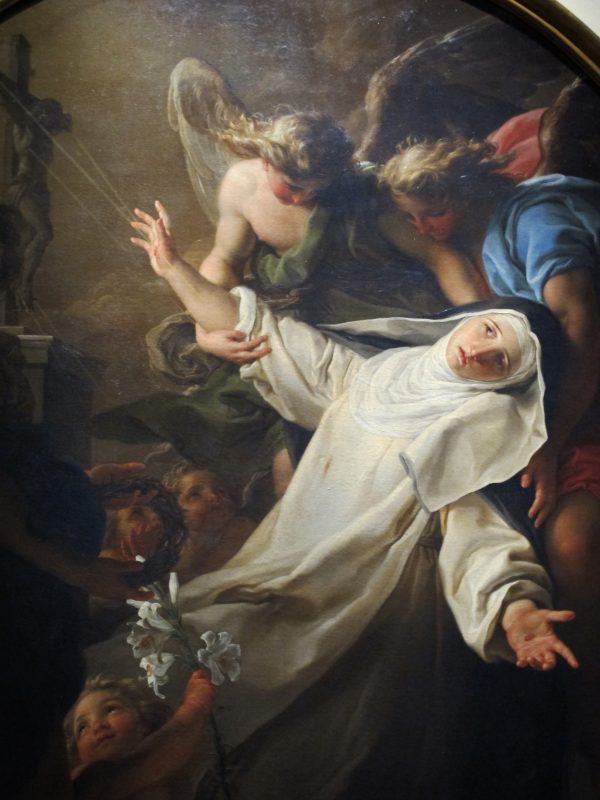 Before we go further, it is important to always keep in mind that hagiographies are not History. They are in fact literary works in which every element finds its place inside the narration for a specific purpose – that is not the accuracy of facts. The purpose of these tales is rather to create a bond with the reader, who at the time was supposed not only to deeply admire the saints, but to empathize with their suffering, to feel the pain in first person, even if vicariously, to identify with their tormented body.

Secondly, it should be considered that the lives of saint women were mainly written by male monks, and clearly reflect male enthusiasm and fantasies. All this has brought several authors (B. Burgwinkle e C. Howie, G. Sorgo, S. Schäfer-Athaus, R. Mills) to analyze the hidden parallelisms between hagiography and pornography, as the two genres – all obvious differences considered – share some common features: for instance, the special attention given to the body, the importance of identification, the extremely detailed descritptions, the use of stylized characters, and so on. 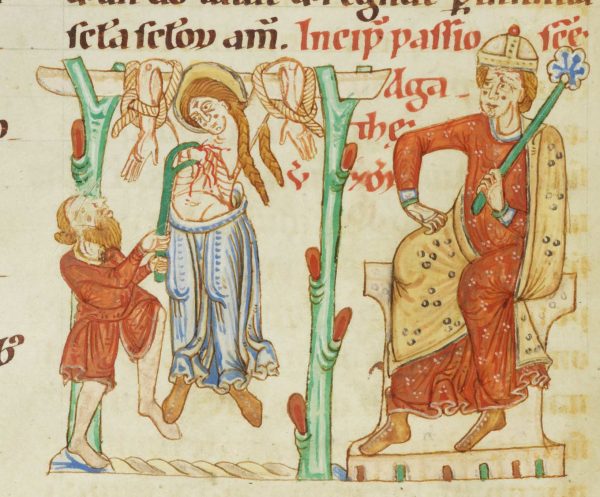 Sarah Schäfer-Althaus, in her paper Painful Pleasure. Saintly Torture on the Verge of Pornography (in Woods, Ian et alii, Mirabilia 18 2014/1) focuses on three saint women: Saint Agatha, Saint Apollonia e Saint Christina.
In the case of Saint Agatha, according to some versions, during the torture a significant inversion occurs. If Saint Catherine, as we’ve seen, found the horrid pus “delicious”, for Saint Agatha the suffering turns into pleasure.

“The pains are my delight”, she literally exclaims, “it is as if I were hearing some good news” – an announcement, which enrages her male tormentor to such an extent that he redirects his attention not only back at her already mutilated body, but especially at her breast – the utmost signifier of her femininity – and has it brutally cut off. Once more, contemporary readers might expect a reaction denoting anguish and pain, a cry for heavenly relief for her suffering, yet instead, Agatha angrily replies in several versions of her legend: “Are you not ashamed to cut off that which you yourself wanted to suck?” 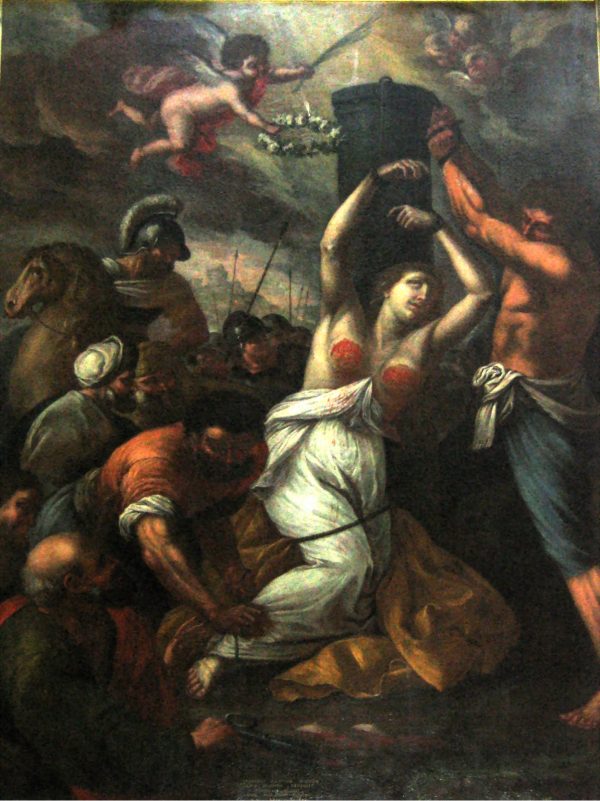 The same goes for Saint Apollonia and Saint Christina: here too, the penetration is merely symbolic, so that the protagonists can be joined with Christ while still chaste, and therefore their mouths end up being violated. Saint Apollonia endures the torment of having all of her teeth pulled out, and Christina has her tongue cut off.
At first glance the sexual allusion in these tortures might not be evident, but Schäfer-Althaus unveils its metaphorical code:

In medieval common knowledge, the mouth was on the one hand considered a “lock” with the teeth functioning as the final “barrier”, deciding what ideas and thoughts enter and leave the body. On the other hand, however, from Antiquity up to the ninteenth century, the mouth was linked to the female genitals and the tongue was often paralleled with the clitoris. The clitoris was in return often described as a “little tongue” and belonged to one of “woman’s shameful members”.

So these two torments could imply sexual violence, although it is only symbolic in order to allow the reunification with Jesus. These are, eventually, tortures which violate all of the most feminine body parts, yet preserving the purity of the soul.
So much so that Saint Christina can dare pick up her freshly cut tongue, and throw it in the face of her tormentor.

And her tongue, this instrument of speech and this symbolic clitoris, takes away his eyesight. 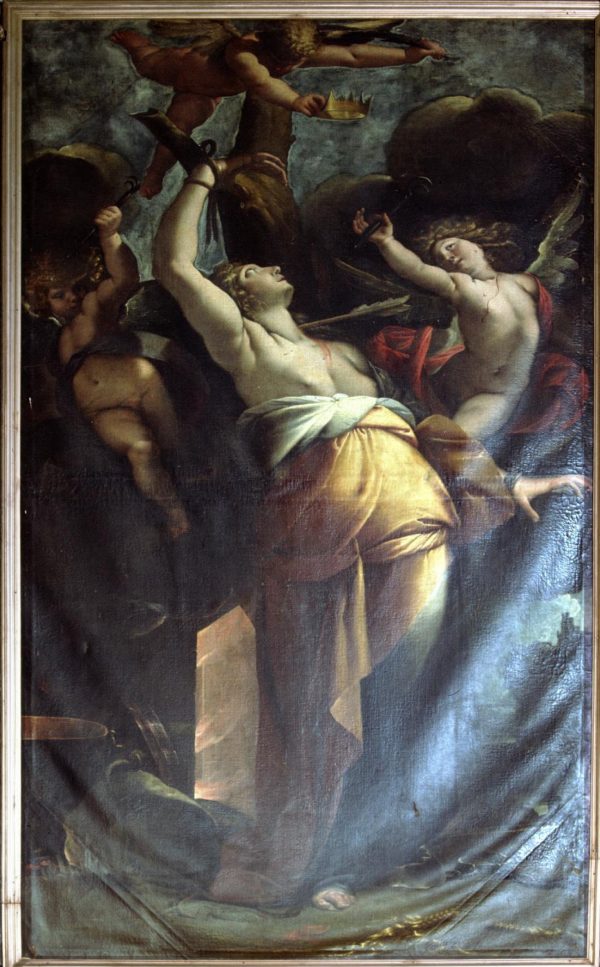 If the parallel between hagiography and pornography is intersting but – let’s face it – a little risky, undoubtedly these hyperbolic tales compiled, as mentioned, by male authors in a monastic environment, give us a glimpse of medieval male fantasies.
There are scholars, like the already quoted Roudinesco, who have come as far as to recognize in these medieval tales an anticipation of Sade’s themes or, more precisely, a source of inspiration for the Marquis‘ work:

This is why The Golden Legend, a work of piety that relates the lives of saints, can be read as prefiguring Sade’s perverse inversion of the Law in The One Hundred and Twenty Days of Sodom. We find in both the same tortured bodies that have been stripped naked and covered in filth. There is no difference between these two types of martyrdom. The Marquis adopts the model of monastic confinement, which is full of maceration and pain, removes the presence of God, and invents a sort of sexological zoo given over to the combinatory of a boundless jouissance of bodies.

After all, the line between pleasure and pain is often blurred, and this is even more true in hagiographic literature, since in martyrdom the pain of sacrifice is inseparable from the joy of reunification with God.
And the hidden gratification for the most atrocious details, the colourful language and the vivid descriptions, had to provoke in the reader a desire: desire to emulate these fearless saints and these powerful, incorruptible virgins who were able to transform pain into ecstasy. 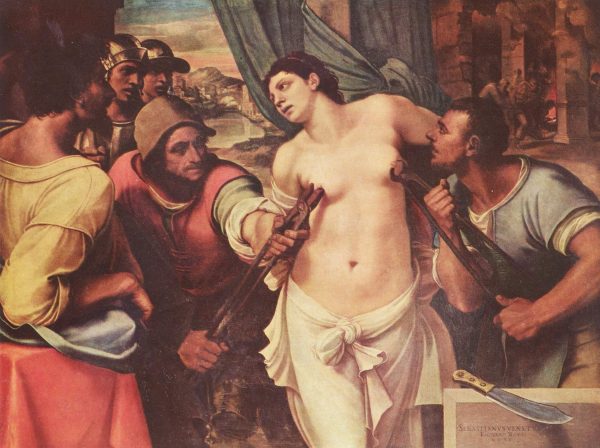